Arup engineers have been deeply involved in the famous building since the 1950s. Initially working alongside architect Jørn Utzon to realise his daring design, they have continued to care for the building through the decades and are undertaking the current ambitious Renewal programme.

Arup Deputy Chair Tristram Carfrae said the honour recognises the engineering and construction brilliance in helping design one of the 20th century’s greatest icons, using new techniques and materials which are now commonplace.

Arup wrote to Utzon the day after he won the international design competition in 1957, offering to work with him. It took the firm seven years, 350,000 man hours and at times, 200 engineers to do all the work before the final structure stood up(1). 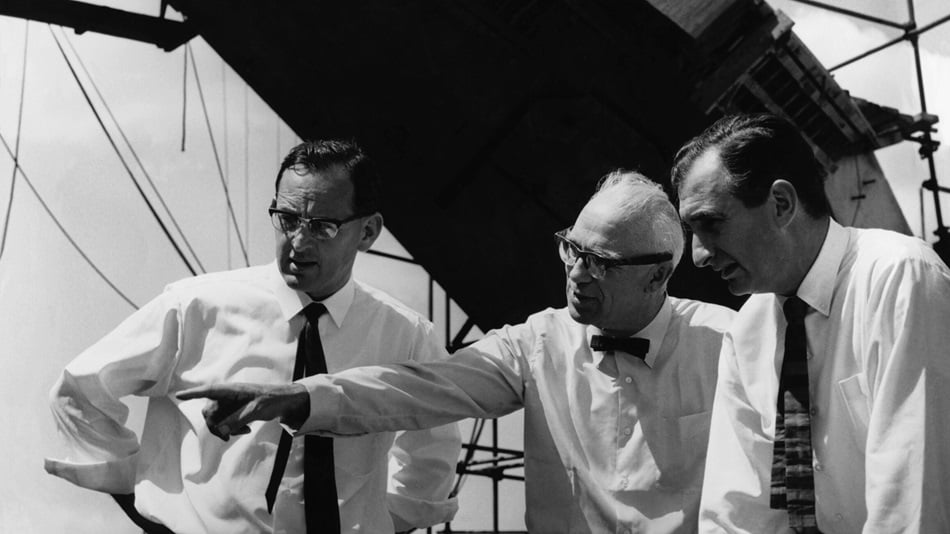 From left: Michael Lewis, Ove Arup and Sir Jack Zunz on site at the Sydney Opera House in 1966.

It was the first computer-design building of significant scale.

Arup structural engineer Peter Thompson joined the SOH project team in London in 1958 and often visited Utzon’s Denmark office. He recalls: “I worked on the substructure of the Opera House, the stage machineries and the base itself and then on the shells.

“It needed an enormous amount of engineering power…when we came to the roofs, nothing like that had been done.

“To design one rib, it took two weeks of hard graft on a hand calculator, then computers came along… there were two. On a Friday night Peter Rice and I used to go to Northampton Polytechnic and lock ourselves in for the weekend and process reams of teleprinter tape into a computer to work out what our shells were doing.

“We had to do things with concrete that hadn’t been done. The codes of practice didn’t account for what we were trying to do and the construction started before the roof had been designed. So we were designing half of it without knowing how the other half was going to fit.”

The new recognition involved an exhaustive application process, with initial approval from Engineering Heritage Australia and then the ASCE Board.

“To an engineer it’s a marvel of ambition, of audacity,” said President of Engineers Australia Sydney Division Don Moloney CPEng, who represented the organisation at the recognition ceremony. “In essence, designing and building this masterpiece required multi-disciplinary dedication, expertise, skill, ingenuity and fortitude by engineers, architects, surveyors and builders alike.”

In 2007, when Sydney Opera House was placed on the UNESCO World Heritage List, the citation acknowledged Arup’s integral contribution to making Utzon’s ‘visionary experiment’ a reality.

The Sydney Opera House is also of outstanding universal value for its achievements in structural engineering and building technology. The building is a great artistic monument and an icon. ” UNESCO

Watch a film about Peter Thompson, an engineer with Arup for his entire career, and his story on designing the shells of the Sydney Opera House
To view this video, you must enable cookies.