Today we celebrate the opening of Little Island, a 2.4-acre urban park and performance venue, situated above the Hudson River in New York City. Owned by the Hudson River Park and designed by the London-based Heatherwick Studio and the New York-based landscape architecture firm MNLA, the opening of Little Island is the culmination of over 8 years of planning, development and construction. 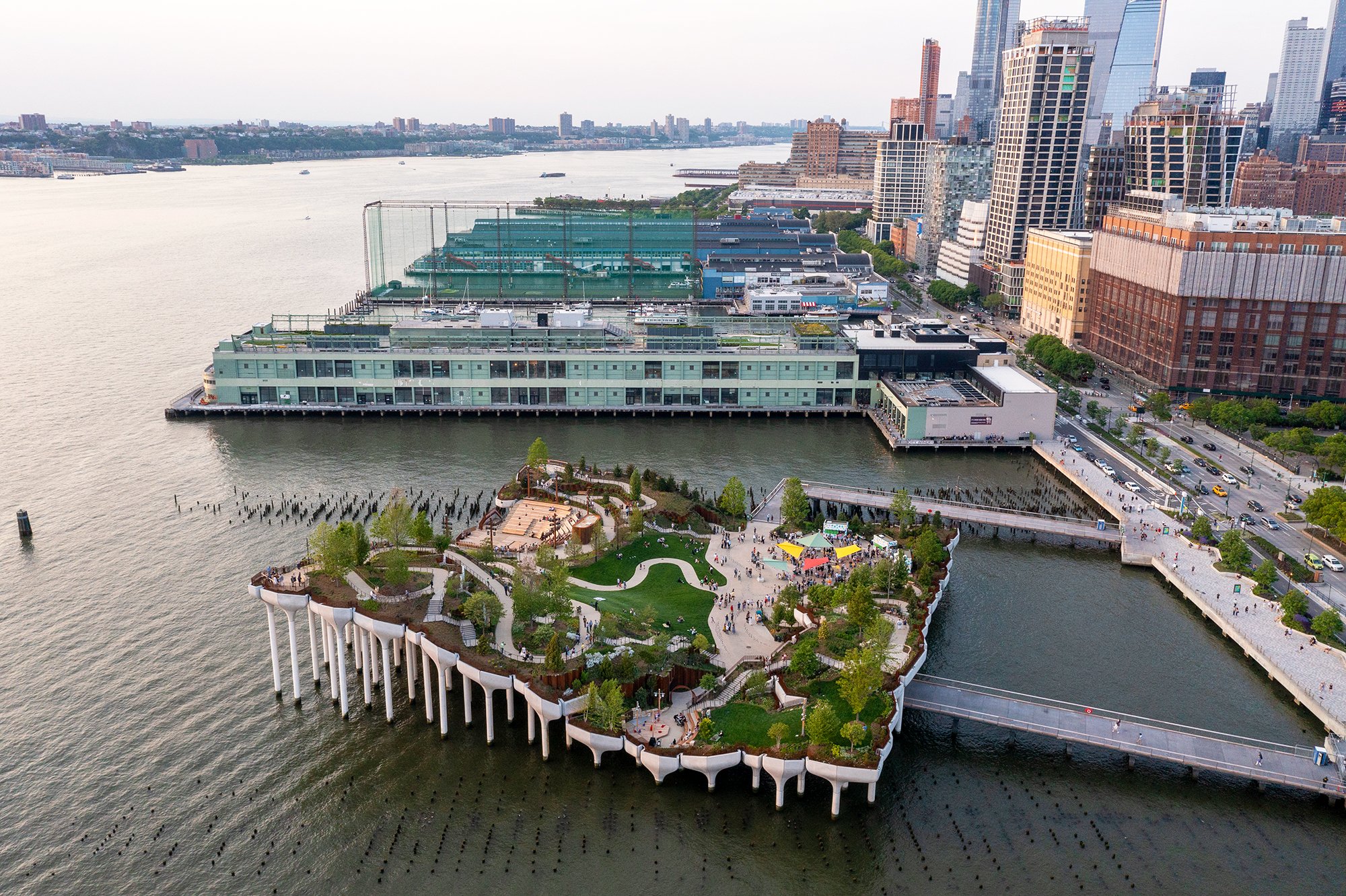 Heatherwick Studio were lead designers for the project, developing the idea from initial concept through to the pier's public opening. We were responsible for the overall design, from the form, topography and landscape through to the interior spaces, materiality, furniture and details.

“The project began when we were asked to conceive of a sculptural structure to go on a design for a newly enlarged piece of the Hudson River Park promenade The project was interesting, but we saw the opportunity to create a more engaging experience for New Yorkers and to build on the city’s heritage of inventing exciting new public spaces”, explained Thomas Heatherwick, Founder of Heatherwick Studio. “Instead, we had the idea to make an entirely new type of pier as a lush rectangular garden island, connected to the land with generous gang-planks as bridges, aligned to the street grid of New York.

As well as making multiple spaces for different activities and performances, this new public space could also take advantage of the water to create a more meaningful threshold that allows visitors to feel they’re having a break from the hecticness of the city.

Typically pier structures are always flat, but we saw this as an unmissable opportunity to lift the surface to create a topography that would make a more dynamic social experience for visitors and give great sightlines for performing spaces and lookout points over the river and back towards the city. Also, typically, piers are composed of structural piles that go down into the river bed with slabs that cover them to make a surface. However, we were inspired by these piles and the civil engineering required to build structures that are able to withstand extreme river conditions. Could we make these the heroes of our project, rather than hiding them?

The vision that’s been built is based on taking these piles and turning their tops into dramatic planters that fuse together to make a richly-planted undulating landscape.
Our intention has been to make an exciting space that is free for everybody to come to, that treats the river as part of nature as well as plants and even each other.”

MNLA collaborated with Heatherwick Studio to realize the park, its circulation system, and to design performance spaces including an open plaza for recreational and educational programs, as well as leading the design of the comprehensive landscape. Using the team’s 3D model, we were able to effectively determine the layers of gravel, geofoam and soils that make up the surficial topography.

“Little Island is a special place that affords New Yorkers the rare opportunity to experience a multi-sensory landscape,” said Signe Nielsen, MNLA Founding Principal. “As one strolls through the park many destinations beckon—overlooks with unparalleled views, cultural venues with continually changing offerings, sloping lawns for picnics, and seating nooks with contemplative sights. Each of these is engulfed by a unique landscape that transitions from a rich diversity of colors and textures to open grasslands as one ascends the three hills. My hope is that visitors are surprised and delighted each time they come. This has been an amazing journey that could not have been realized without the entire design team’s extraordinary collaboration, and I especially appreciate the dedication of our firm’s Senior Associate Dan Yannaccone.”

“Little Island is an urban park like no other, and its opening is a true testament to the power of pushing boundaries and partnership between leading design, engineering, architecture and construction firms,” said David Farnsworth, Arup Principal. “Arup was tasked to bring Little Island’s unique design to life and create an entire park over the Hudson River that was safe, feasible and would bring joy to millions of New Yorkers and tourists. Arup is thrilled to have contributed groundbreaking technical solutions, leveraging digital fabrication and parametric modeling that deliver the project’s ambitious architectural vision and create a truly iconic urban oasis.”

Heatherwick Studio was initially invited to create a pavilion for a new extension to the waterfront. But the team felt this was a missed opportunity to make a significant new urban space for New York, whilst at the same time reimagining what a pier could be as an experience. Rather than creating another flat jetty, the pier could become a new piece of topography, rising and falling to shape a variety of spaces and functions – even performance spaces. The idea of raising the park on its foundations came from the existing wooden piles in the water. The piles have become an important habitat for marine life and are a protected breeding ground for fish. The height of the piles varies to create the contours of the new landscape. The corner of the pier is lifted to allow sunlight to reach the marine habitat, and the edge falls to define hills, viewpoints and to carve out a natural amphitheatre for performances. In this way, the pier and its supporting structure are one.

The planters, or ‘pots’ are filled with soil and planted with more than a hundred different species of indigenous trees and plants, which encourage biodiversity and are able to thrive in the waterside climate of New York. To determine the pots’ form, the design team looked to nature, and the mosaic of ice that forms around the wooden piles when the river freezes. The studio reinterpreted this in a tessellated pattern that appears organic, but uses repeated elements that could be standardised for fabrication. The precast components were fabricated locally and then transported by boats and assembled on site, minimising disruption to the city

Access to the pier is via two accessible ‘gangplanks’, covered in timber planks and oriented in a continuation of New York’s street grid. Inside, paths wind through trees and grassy seating areas to hidden, unexpected views. Restoring the entertainment venue that was lost when Pier 54 fell into disrepair, the park integrates three performance spaces: an acoustically-optimised 700-seat amphitheatre, a more intimate 200-seat spoken word stage, and a flexible venue with capacity for 3,500 at the centre.

MNLA collaborated with Heatherwick Studio on the design of Little Island and led the design of the park’s landscape with three core goals:

Arup played a critical role in construction and development, supporting through: