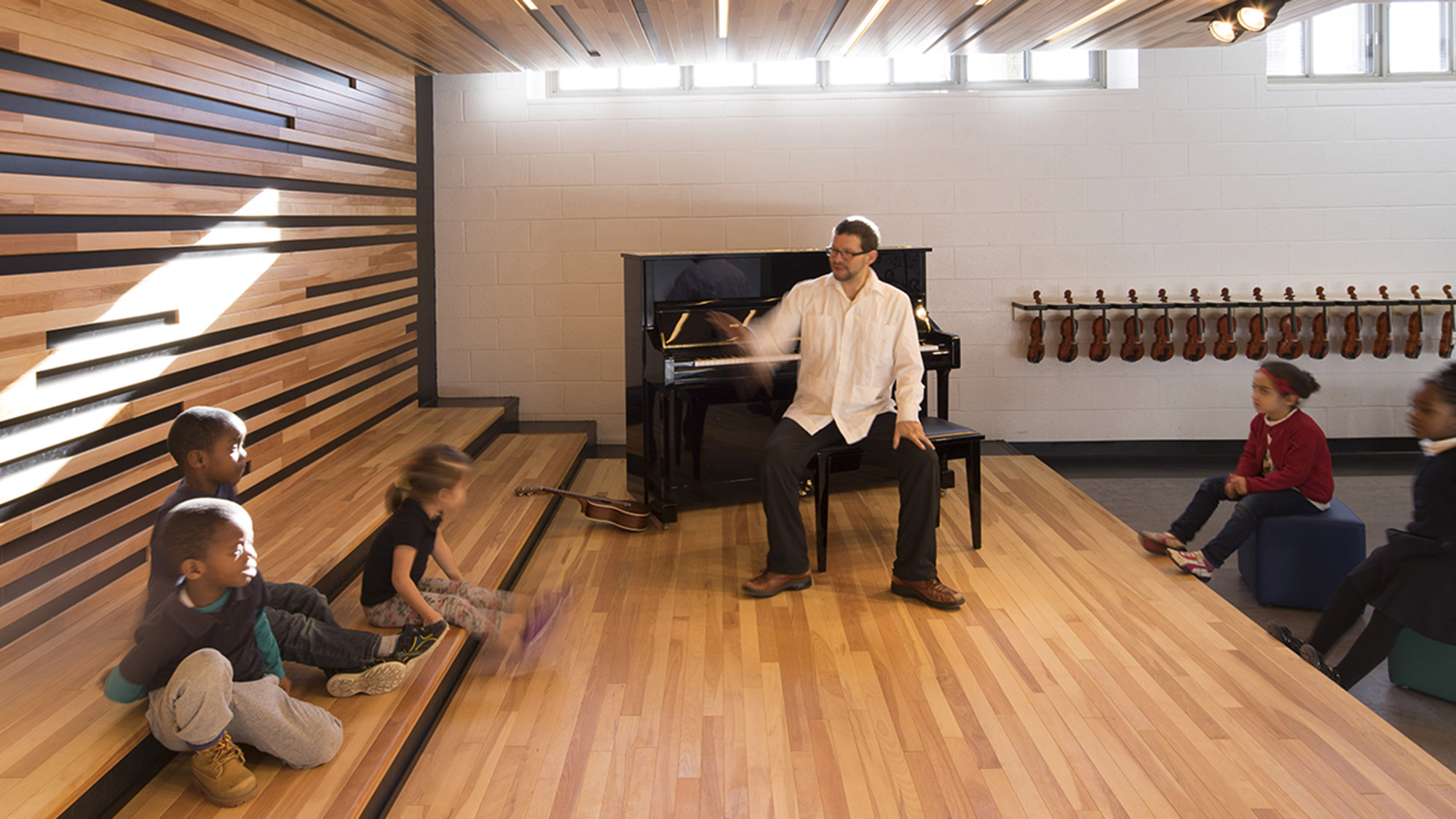 Talk to Willem Boning about this perspective 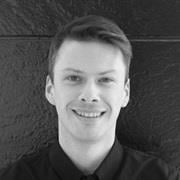 Talk to Willem Boning about this perspective

The following article was written by Zach Mortice, an architectural journalist based in Chicago.

The design for La Musique Aux Enfants began with one key question: “How can we make a basement sound more like a concert hall?” said Willem Boning, an acoustic consultant with Arup. The brainchild of Orchestre Symphonique de Montréal director Kent Nagano, the Musique Aux Enfants program is a collaborative initiative by the orchestra, the Université de Montréal, and the Commission scolaire de la Pointe-de-l’Île to teach roughly 180 pre-K and kindergarten students choral, piano, and violin music. Located in the previously unfinished basement of a public school, the classical music curriculum will serve children in Montreal North, a neighborhood with a high percentage of low-income households.

Architects at LEMAYMICHAUD and acousticians at Arup donated their services to the project. According to Arup’s Tateo Nakajima, who worked on the Orchestre Symphonique de Montréal’s concert hall, the Maison Symphonique, the project grew out of Nagano’s long-standing desire to overcome disparities in access to music across the city and offer children a welcoming and inspiring space to explore the benefits of music. “The orchestra has done things like free, open-air concerts which bring together tens of thousands of people every summer. But they wanted to bring music to very young children in some of the most diverse communities in Montreal. So they brought friends together to work to make this a reality.”

The design team helped the school make the most of its low-ceilinged basement by carefully calibrating  the room’s acoustics and incorporating exuberant visuals tailored to the lunchbox set. 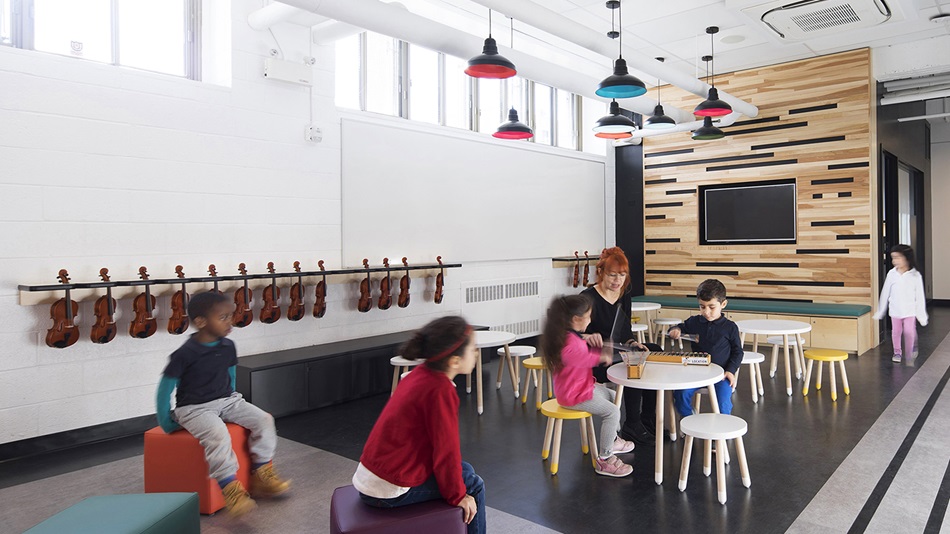 Visit today and you’ll find a 4,000-square-foot space divided into three areas. First, there’s an informal group lesson area with child-scaled tables and chairs, along with an anime-style mural that dispels any ideas of white-wigged classical music snobbery. But it’s the other two areas — a set of practice rooms and a performance space — that define the school’s sonic experience.

The orchestra has done things like free, open-air concerts which bring together tens of thousands of people every summer. But they wanted to bring music to very young children in some of the most diverse communities in Montreal. So they brought friends together to work to make this a reality. ” 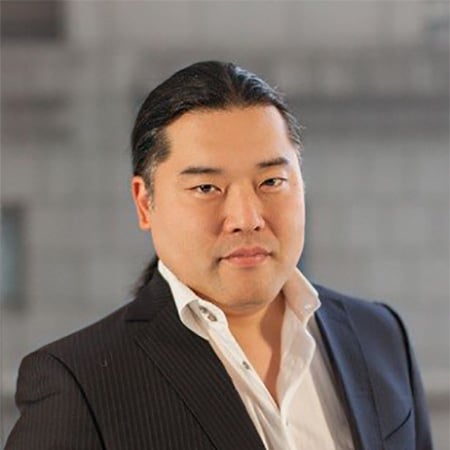 The eight individual practice rooms that run along a hallway posed some of the project’s biggest acoustic challenges.

One of these was sound isolation. To ensure that air would circulate properly in the practice spaces, each room needed to be connected to the HVAC system through a duct in the ceiling. But these same ducts would also carry noise from room to room.

The solution involved creating a maze of ductwork that would prevent sound from circulating. “The architects tested it by standing in neighboring practice rooms and yelling into the diffusers,” Boning said. “Our idea worked — they couldn’t hear each other.”

The second major practice room design challenge involved sound quality. Without any acoustic treatment the rooms would have sounded overly loud and experienced a phenomenon called flutter echoes: noise that bounces back and forth off parallel walls, creating a metallic, ringing sound.

One obvious solution was to cover the practice room walls and ceilings in acoustic insulation. But this would “make the room sound dead,” Boning said, like the students’ notes were “going into the void.”

The solution lay in angling the walls instead of creating a rectangular box. This scattered the sound waves, preventing flutter echo formation. The team then optimized the amount of acoustic treatment to control for volume without dampening the rooms’ sound too much. An added benefit of these odd angles, said LEMAYMICHAUD’s Jean-Marc de Grandpré, is that the school has no long, monotonous corridors. The hallway’s playful atmosphere is reinforced by kid-sized teal benches.


To make the school’s performance area sound much bigger than it is, Arup’s team developed a two-part strategy. First, they used sound-reflecting surfaces around the stage to create a buildup of reverberant energy, similar to the effect found in larger concert halls. This provides acoustical feedback to the children on stage and makes them feel like they’re in a bigger, grander space.

Second, the acousticians positioned sound-absorbing treatment in the middle of the ceiling while keeping the upper corners hard and sound-reflecting. The sound-absorbing portion helps to control loudness in the audience area and lessen claustrophobia-inducing reflections from the low ceiling above. The hard corners, meanwhile, add a sense of spaciousness to the room’s acoustics.

The finished space is wide open, with nary a column or even any fixed furniture. Seating comes in the form of cube-shaped ottomans in bold orange, blue, purple, and red. This arrangement also helps with programmatic flexibility — a particularly important quality for a venue that will in the future be used by community groups when school is not in session. 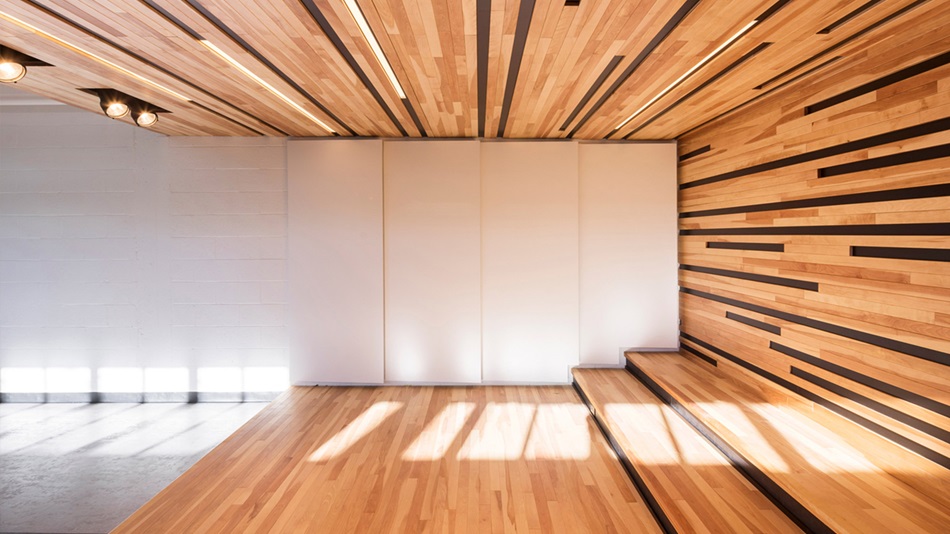 The stage itself is made from sound-reflective cherry and maple wood, its design directly referencing the Maison Symphonique. “We used the pale wood used in the Symphony Hall so the kids would have a sense of performing in a hall, even if they’re very young,” said de Grandpré.

These design strategies were successful in bringing classical music to a child’s level without trivializing it. The school “does not impose any kind of elite, intimidating atmosphere, but it brings the best qualities of concert halls to a scale for children,” said Boning. “It shows that this isn’t just something that the pros can have or that only people who can afford an orchestra ticket are entitled to.”

Find out more about acoustics, arts and culture in the built environment 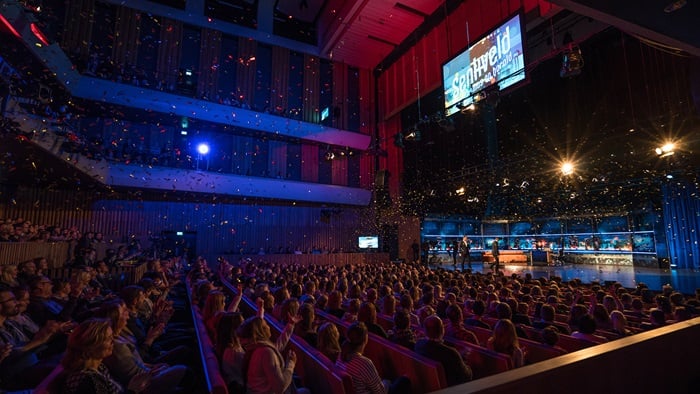