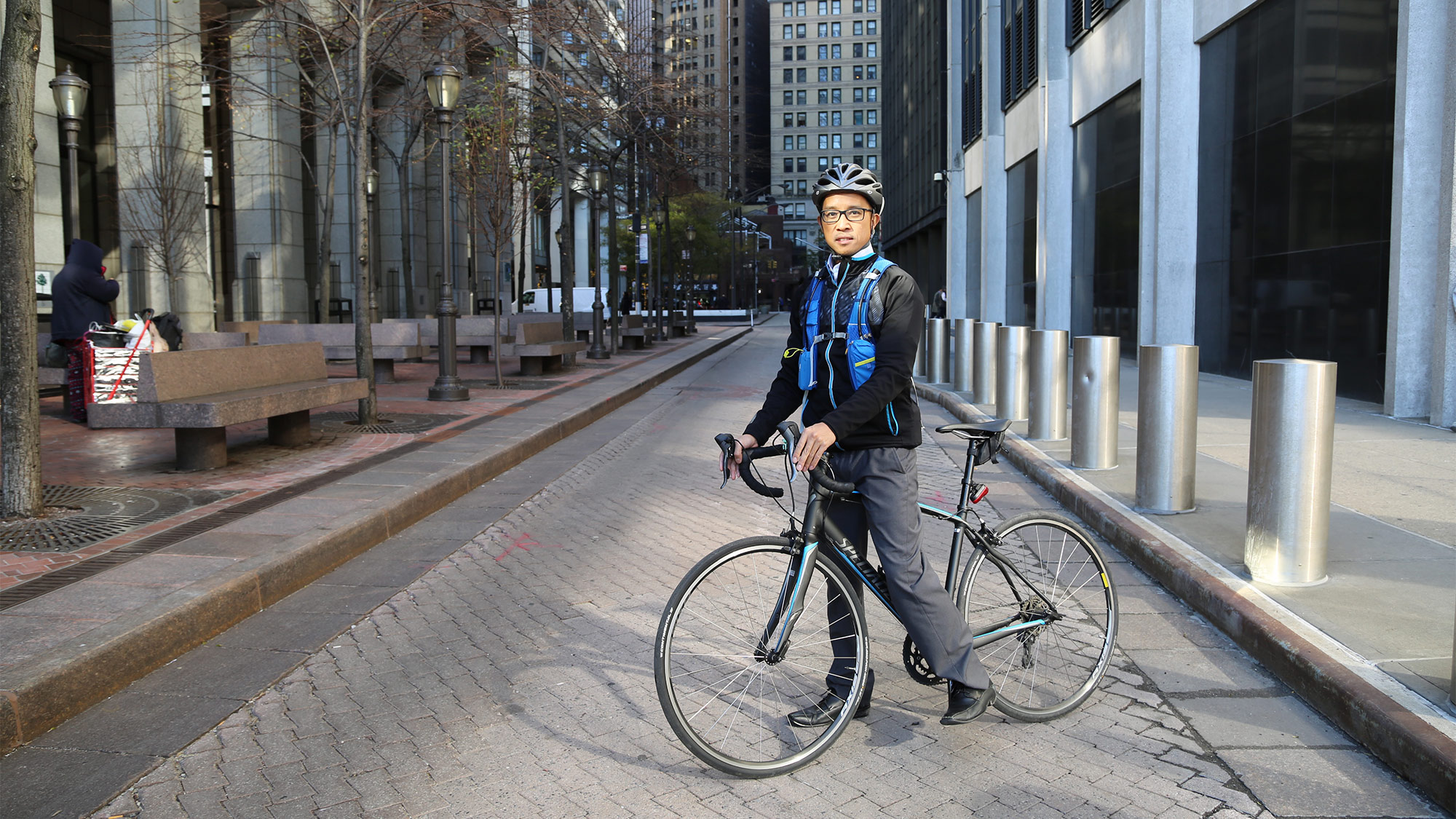 Can a cyclist's commute cause more harm than good?

Can a cyclist's commute cause more harm than good?

Vincent Lee, an associate principal in our New York office, is test subject 75 in an ongoing study through Columbia University that tracks pollution intake among cyclists. Specifically, the researchers are tracking the consumption of PM 2.5 (particulate matter, dirt, or soot that’s 2.5 micrometers or less in width) in those who commute throughout New York City at peak times via bicycle.

Participants are outfitted with state-of-the-art equipment that measures air pollution, respiration, and heart rate while resting and commuting — both to see where pollution dosage spikes and to gauge the long-term health impacts of such a commute. To track all of this information, Vincent is required to wear this kit for six nonconsecutive days over the course of three weeks.

So, Vincent is commuting, working and walking around the office, attending client meetings, and even sleeping decked out in air-quality monitors, a blood pressure cuff, and a sporting spandex biometric vest that estimates the volume of air he inhales. He spoke with Arup's Kelsey Eichhorn to explain his excitement for participating in the study — and his somewhat bizarre costume.

How did you first hear about this study?

A colleague of mine and my aunt, actually on the same day, both heard about the study on a WNYC podcast. I guess they both thought, “I know someone who crosses a bridge on their commute” — bridge crossings are a particular target for the study. So they’re both to blame for the getup I have to wear. The study itself was officially rolled out in 2015 under a five-year grant. This past summer, the researchers began a push to recruit more than 150 cyclists, hypothesizing that this collection of data ultimately might show an adverse effect on heart rate and blood pressure for cyclist commuters in New York City.

Biking from Queens to the Financial District, could you guess where your pollution dose might spike?

Absolutely — I would say at certain portions of Queens Boulevard where there’s an extreme amount of congestion. Then, of course, when I get into Manhattan, coming down a portion of Second Avenue, there’s lots of cars and trucks right next to me.

But the main focus of the study — and the reason, I assume, the university picked me to participate — is to analyze individuals who cross the bridges into Manhattan from other boroughs, and I cross the Queensboro Bridge every day. Bridges are a particular target because as a cyclist you’re exerting the most oxygen as you’re climbing up the bridge and at the same time, during commute hours, you’re riding alongside heavy traffic. So a lot of idling cars, a lot of CO2 emissions, all while your respiratory rate is high. 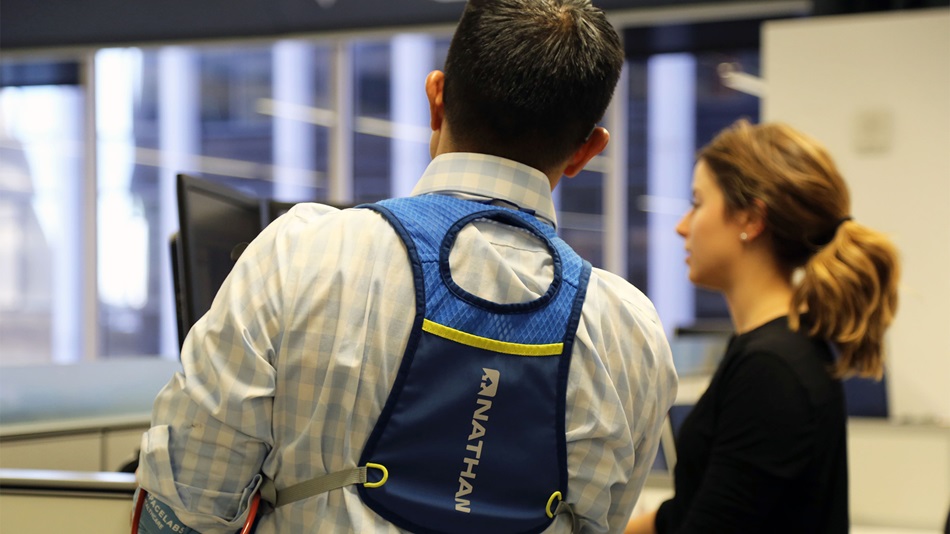 Depending on the study results, would you change your commute?

I hope not. It’s good exercise and it’s free (always good in New York). But I would definitely think about changing my route if I got some doomsday-type results. Let’s say, for example, I was shown that the bridge is the biggest culprit. I would then think about just riding from home to a ferry. If the whole ride proves to really be problematic for long-term health, then yeah, maybe I’m finished as a bike commuter.

Is your participation strictly voluntary? Do coworkers assume it’s Arup-related?

People ask me if I’m getting paid for this, and no, I’m not. I just found the study intriguing. Most of us are operating under the assumption that biking to work is healthy, that it’s good for us. It’s strange to consider that might not be true. Plus, the fact that the study premise was a route I already take made signing up a no-brainer.

And while this has nothing to do with Arup, I think the study is one that many Arupians, and even our clients and collaborators, would find compelling. The fact that we are taking in data from the environment around us, based on a mode of city transportation that many people use and recommend, is a process to which we can all relate. 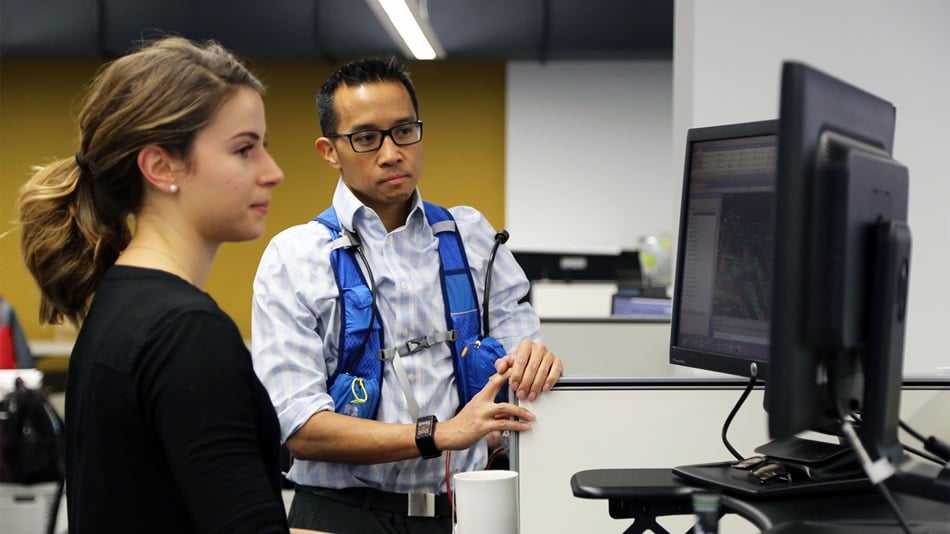 Throughout the day Vincent wears a blood pressure cuff, air-quality monitors, and the vest estimating his inhaled air volume.

At this point you’ve completed two full days out of the six. Any awkward moments?

I did have a couple client meetings. Day one, I kept my coat on. I just didn’t want to explain. Not that the client would care — I think they would actually find it interesting.

Day two, I met with some architects, and before I took my coat off I said, “Let me just warn you…” We actually had a bit of fun guessing why I was wearing all that kit. For some reason, no one was able to guess that it was a Columbia University biking study.

Is this study more of an open-ended hypothesis, or is there an end goal of the research?

Eventually their goal might be to limit congestion or to influence future cycling infrastructure. Right now it’s just a hypothesis, a curious question on someone’s mind. This open-ended question is similar to a lot of the conversations around challenges to the built environment. We assume, based on the existing data, that this or that is the right choice, a good thing to do. Then all of a sudden someone looks at it from a totally different perspective and thinks, “What if we’ve been doing this all wrong?” Not speaking for them, but if there are results that could influence transportation policy and city planning, for us as engineers and planners I think that’s something we would find interesting. Data that we can leverage to make better decisions when designing new corridors, districts, and neighborhoods is always welcome. 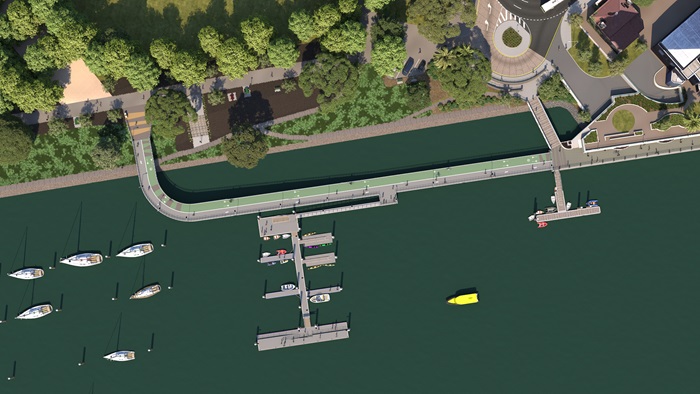 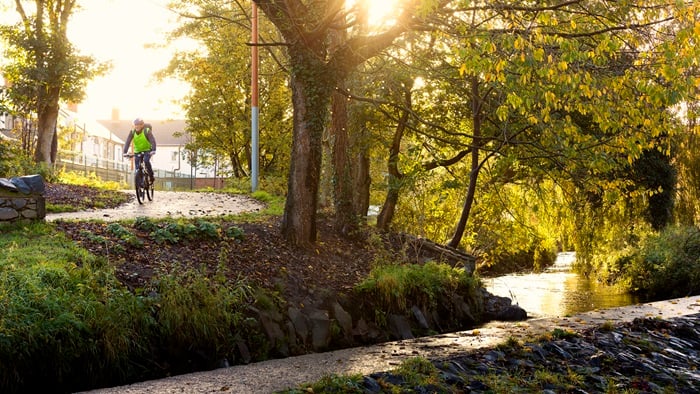 See all Walking and cycling projects

Approximately 60% of people are 'interested but concerned' about cycling. How can we take away the stress of cycling on our urban roads?

City policies often fail to support widespread use of bicycles. I believe we can change this by focusing on latent demand and the barriers to cycling that people cite.