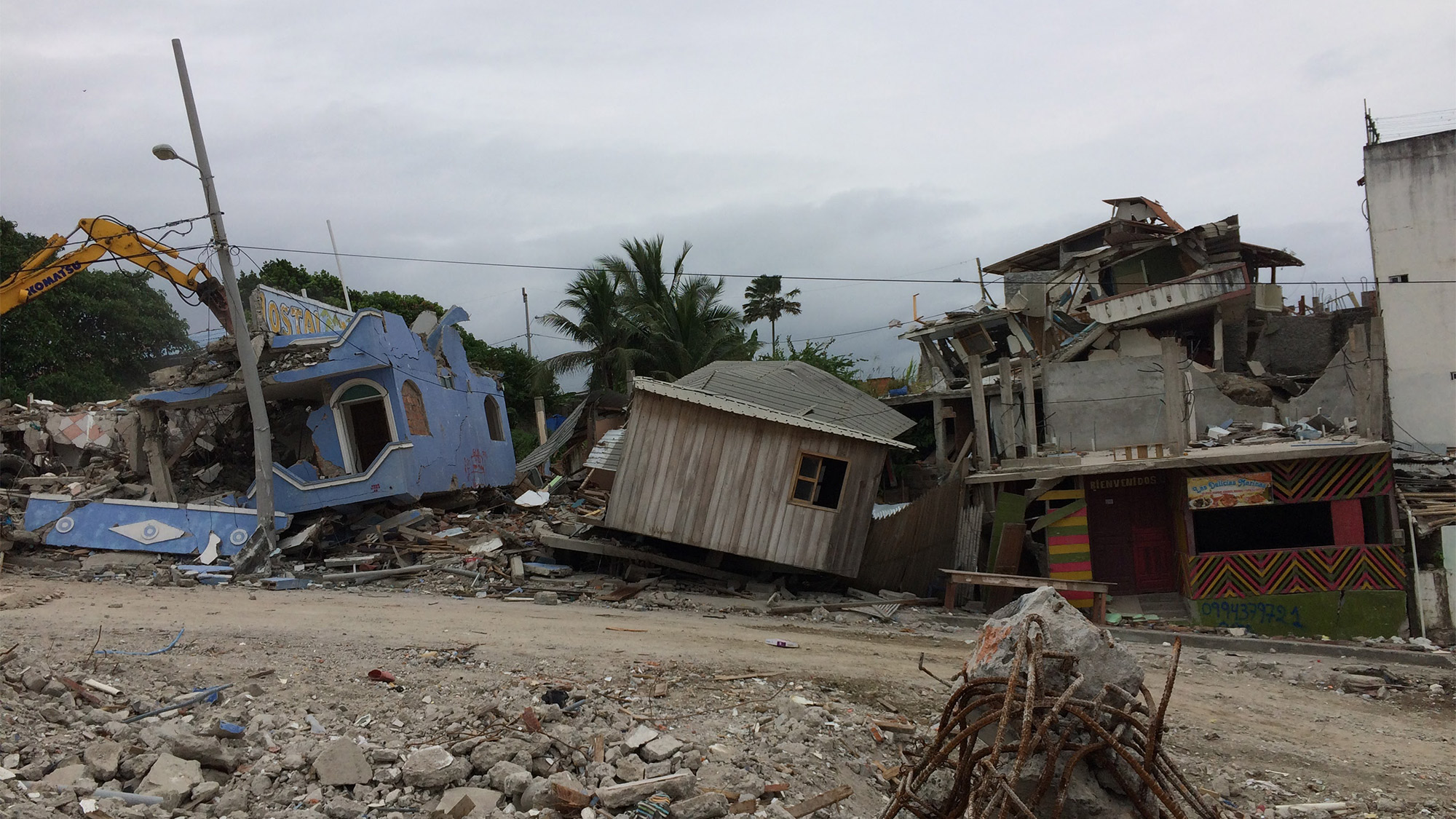 Lessons learned in an earthquake's aftermath

Lessons learned in an earthquake's aftermath

Disasters are never entirely natural; the risks inherent in our environment can be amplified or diminished by any number of factors, from culture to politics and economics.

Similarly, building back effectively after events like hurricanes and earthquakes is never a simple construction exercise. For engineers working in disaster relief, a strong understanding of the local context and an ability to collaborate with a wide range of stakeholders is as important as technical prowess.

For two Arup staff members who traveled to Ecuador in the wake of April’s 7.8-magnitude earthquake, these lessons were abundantly clear. Part of a UK-government-backed team of seismic experts, Anna Pavan from our Madrid office and Francisco Pavia from our Bogotá office spent 10 days assisting the Ecuadorian military’s relief efforts. Most of their work focused on Pedernales, one of the cities hit hardest by the quake. I spoke with Anna and Francisco to learn more.

Describe what you saw when you got to Ecuador

Francisco: When we first arrived in Quito, there was a very large caravan of trucks, 20 or 30, with a convoy of police and volunteers collecting supplies to take to the coast. But that was the only impression I had of any damage. In Quito everything was normal.

We left for Pedernales as part of a convoy with the British, American, and Canadian ambassadors. Along the road there wasn’t much damage either. It wasn’t until just outside Pedernales, about a four-hour drive from Quito, that we saw people camping along the road.

Anna: There was a lot of control; people were organized. The military was going from tent to tent distributing supplies, so people were calm and there was order.

Francisco: The first day we were able to walk around the town and contact the military engineers. They were happy to have us there — we were the only technical team deployed in Pedernales at that time.

I’ve read that up to 70% of the buildings in Pedernales were destroyed. Why did it suffer more than other parts of the country?

Francisco: It’s difficult to know for sure. Other towns were closer to the epicenter, and other areas surrounding Pedernales were better-off. It is confusing.

For starters, the fact that it’s next to the ocean has something to do with it — the plate boundary is there, in between the ocean and the continent.

Anna: The local people blamed the collapsed buildings a lot on materials: concrete made with sea sand and saltwater. In my opinion, Pedernales suffered a lot because of its building typologies. It’s a fairly large tourist town with many hotels and multistory office buildings

Quite a few of the buildings are made with poor-quality concrete. There is a definite lack of seismic detailing.

By contrast, the areas outside Pedernales that Francisco mentioned — for example, the village where we were staying at night — are not tourist areas; these are fishing villages. Buildings out there have mainly one story, maximum two stories, and many of the houses are timber, which behaved particularly well in the earthquake. 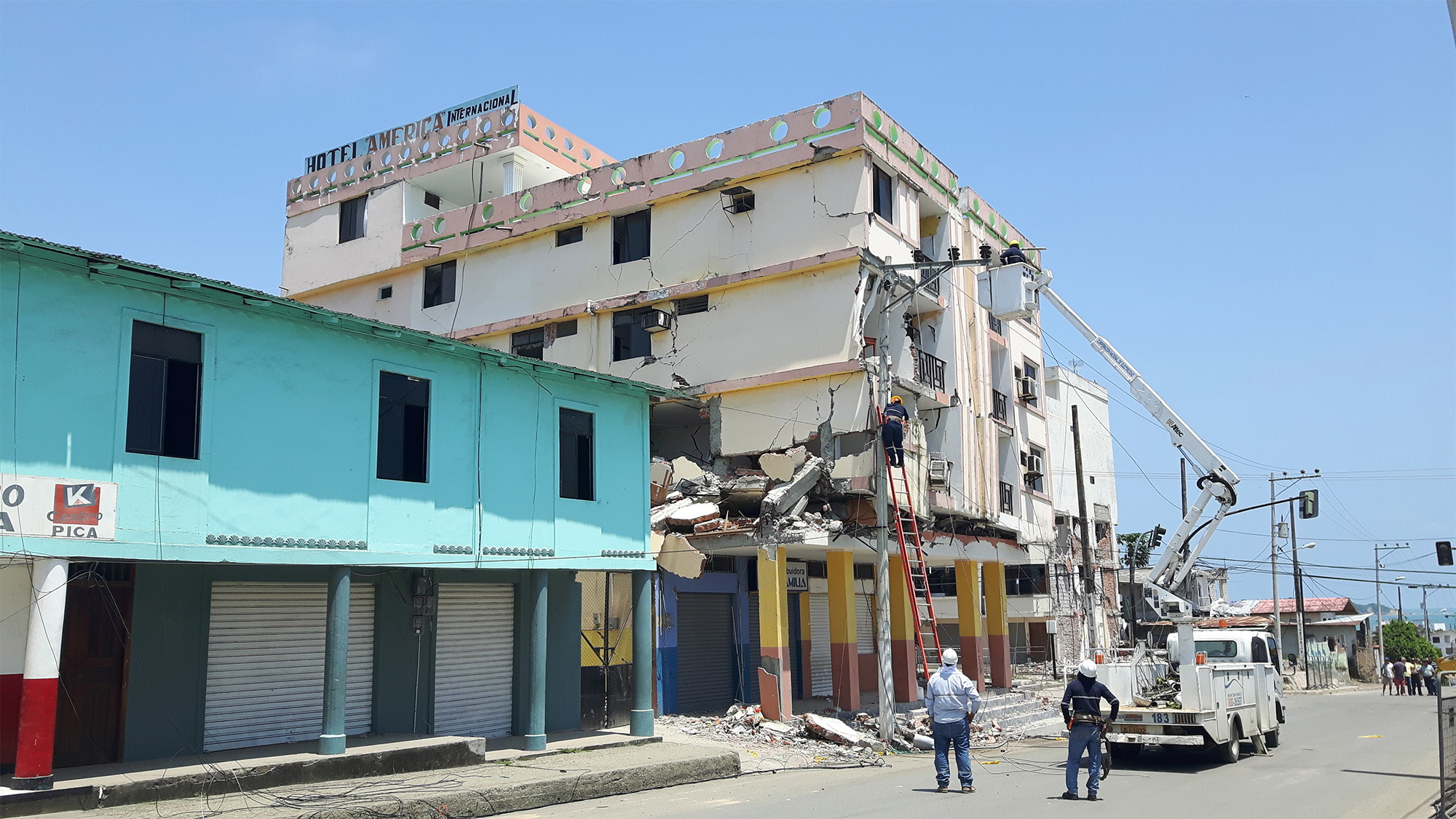 Francisco: Pedernales, from my impression, has developed within the last two or three decades. Some buildings have proper seismic designs, but not a lot.

Often in Latin America people build a foundation for a one- or two-story building but then keep building upwards, with the columns remaining the same size. The result is very dangerous.

Anna: In terms of what we might have left people with, I hope it’s the idea that simple buildings might be safer. If you don’t have any seismic design knowledge and you’re going to build your own house, simple is better. That is likely why some of the other towns did not see as much damage as Pedernales.

Your assignment was to assess the local building stock for damage after the earthquake. Can you describe what you found? Was it different from what you expected?

Francisco: A lot of buildings that I saw were in good shape structurally and could be repaired. A lot of people would think otherwise if they saw a lot of walls down and things like that, but I learned you have to look beyond that to the structure — what’s actually supporting the building, in other words. The problem is that in an earthquake badly designed nonstructural items such as infill walls can be deadly.

A good example is the town hall, the first building that we assessed in Pedernales. We found out that it wasn’t as bad structurally as people were saying, but there was a discussion happening about whether to demolish it, since other buildings nearby collapsed. We realized that stairs and some columns had obviously suffered, but ultimately they resisted and damage was limited to nonstructural walls.

Anna: Yes, as Francisco said, I learned to look at things with a different eye. If you assess a building that is very badly damaged, you really have to focus on where the damage actually is. Reconstruction should learn from and begin with the buildings that structurally withstood one of the strongest earthquakes the earth has experienced in the recent past. In Pedernales, we found that for the big buildings, the important cultural buildings, the damage was more cosmetic — it wasn’t affecting the structures. 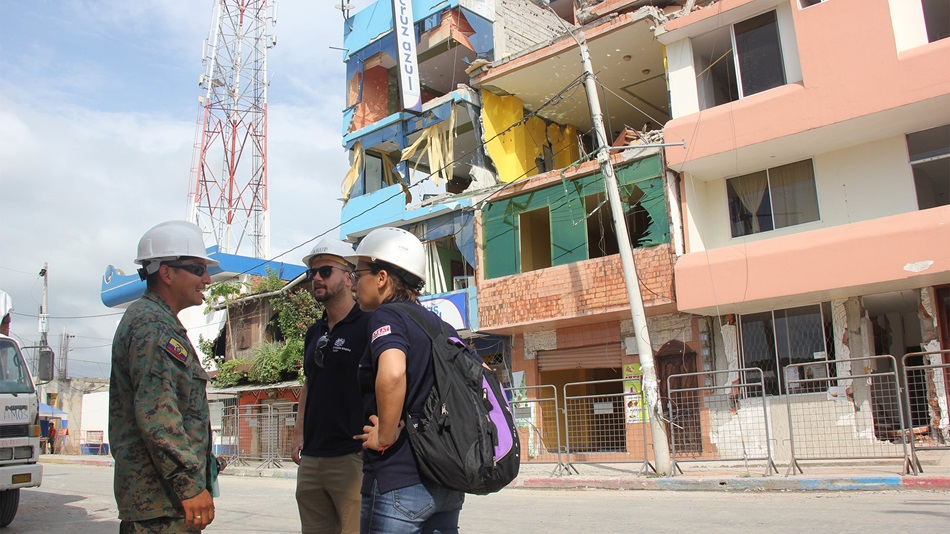 Francisco: We worked with the military to help balance the need to demolish unsafe buildings with the need to recover things for the community.

For instance, the church in the main plaza. The damage was pretty bad — thankfully no one was inside when the earthquake occurred — but structurally it could be saved, actually. So we had the chance to explain this to the army, which was our main stakeholder.

Partly because of this we prioritized assessments of public buildings, although we did look at some houses and shops, especially if people approached us and asked us for help.

Anna: Some of the most important assessments happened when a group of engineers from the army came with us inside the buildings. We were showing them how we were doing the assessments, and day by day we started developing relationships, not just with them but other stakeholders. So we started sharing our knowledge with everyone.

If you don’t have any seismic design knowledge and you’re going to build your own house, simple is better. ” Anna Pavan Senior Engineer 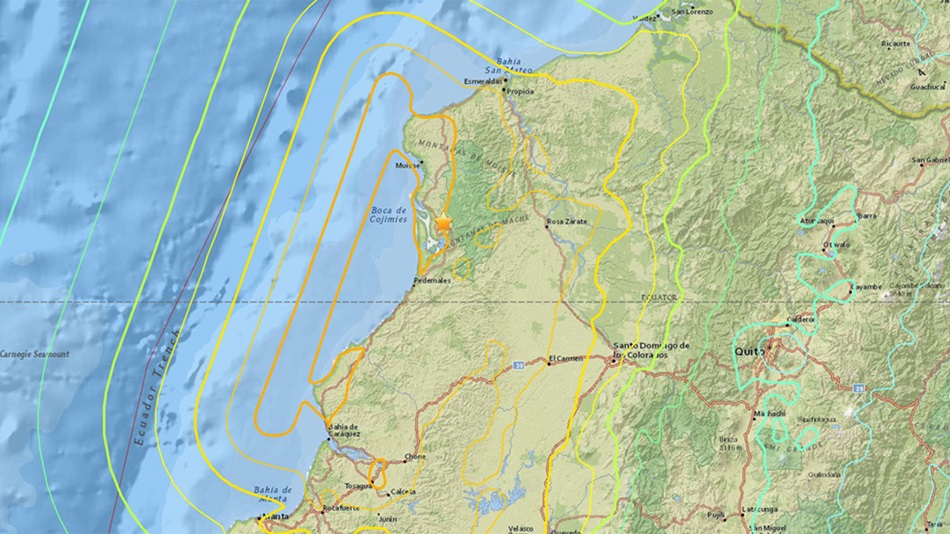 How successful do you think the mission was?

Anna: Overall I think it was successful. We were able to engage with the local community, to gain their trust, and at the same time propose a new methodology. We understood their needs and we worked alongside them. We were able to provide much-needed technical help to start a very long reconstruction process.

Francisco: Before we got there I thought it was going to be hard to get in touch with local authorities and even more difficult to give technical advice and really be heard and trusted. But it was the opposite. Everyone was very thankful and welcoming.

The chief of engineers for the army asked us to join him for a meeting in front of the town hall. They wanted to explain to local authorities and people that the building did not need to be demolished, and he wanted us as an expert second opinion for the public to see.

So I would also say the mission was very successful. Even though the impact we had is obviously very small in the context of all the need — we just did a couple dozen assessments — it soon became clear that our main purpose was not to do a lot of assessments but to share a way of thinking in order for them to do this work on their own. This is probably the best learning opportunity that I’ve had as an engineer.

Anna: Yes, definitely. We were not just sharing our knowledge; we gained a huge amount of experience. It is important to see right in front of you the effects of bad design, of not taking care with seismic detailing. That way we see how important our work is.

Our main purpose was not to do a lot of assessments but to share a way of thinking in order for them to do this work on their own. ” 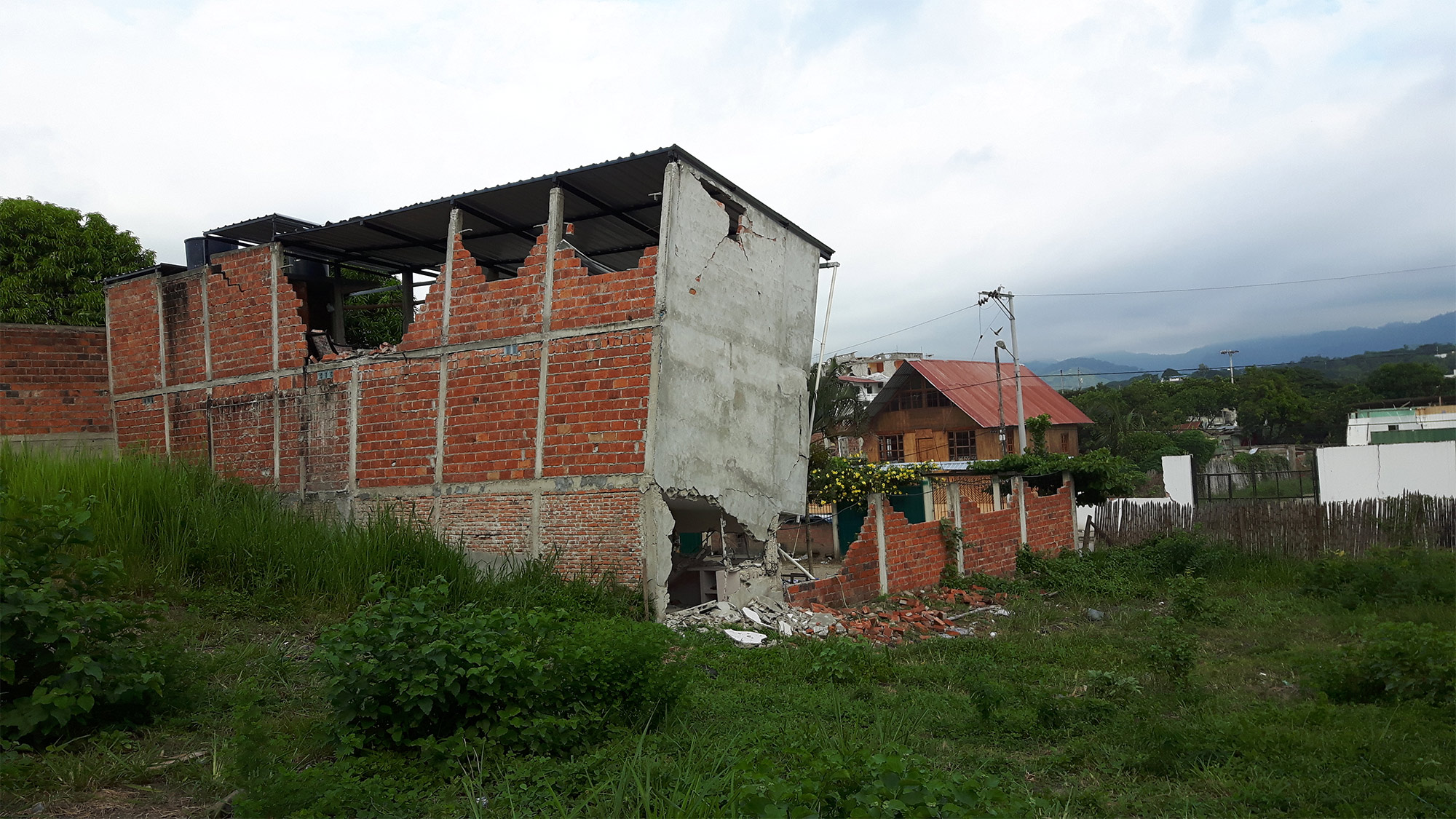 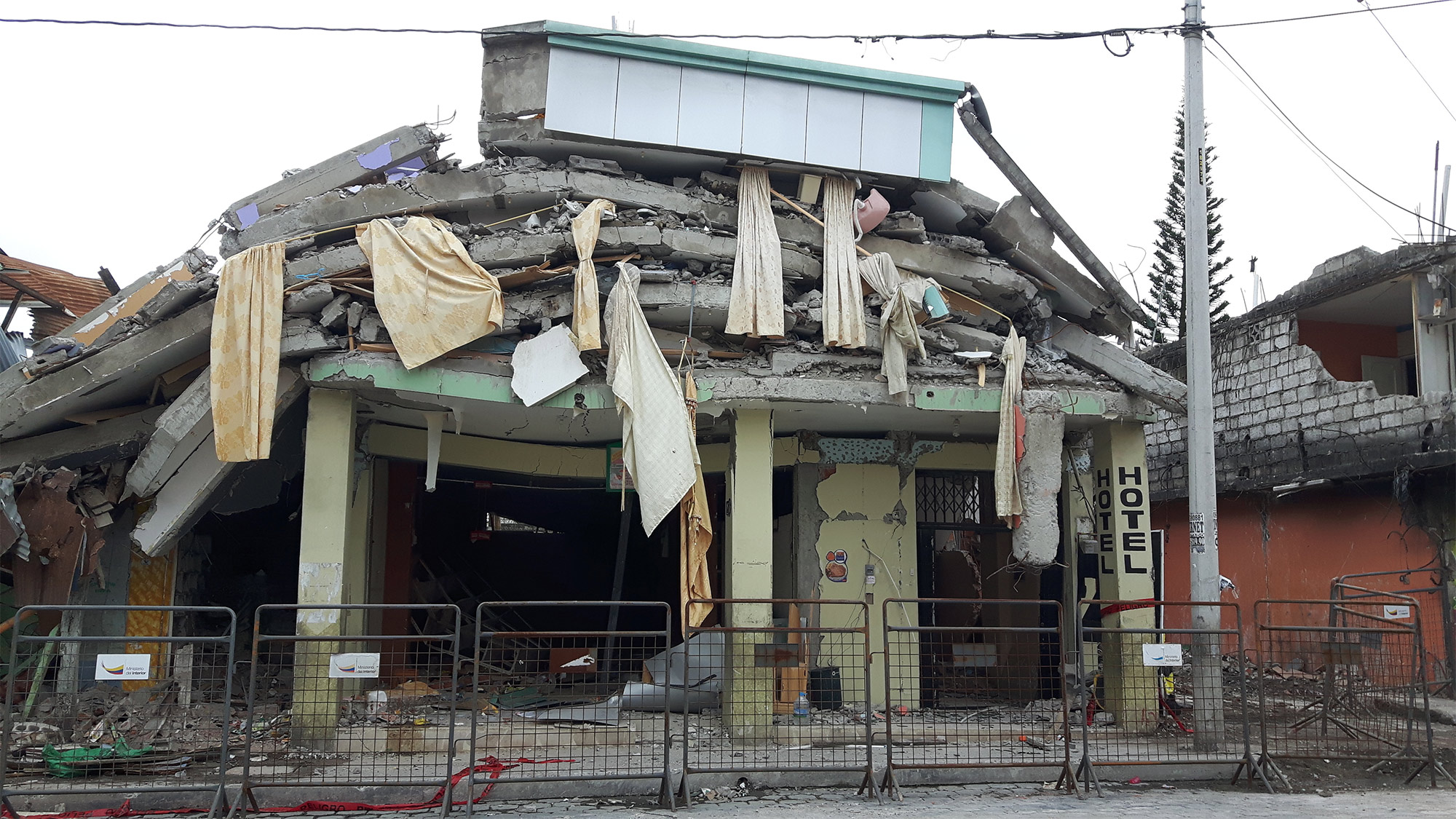 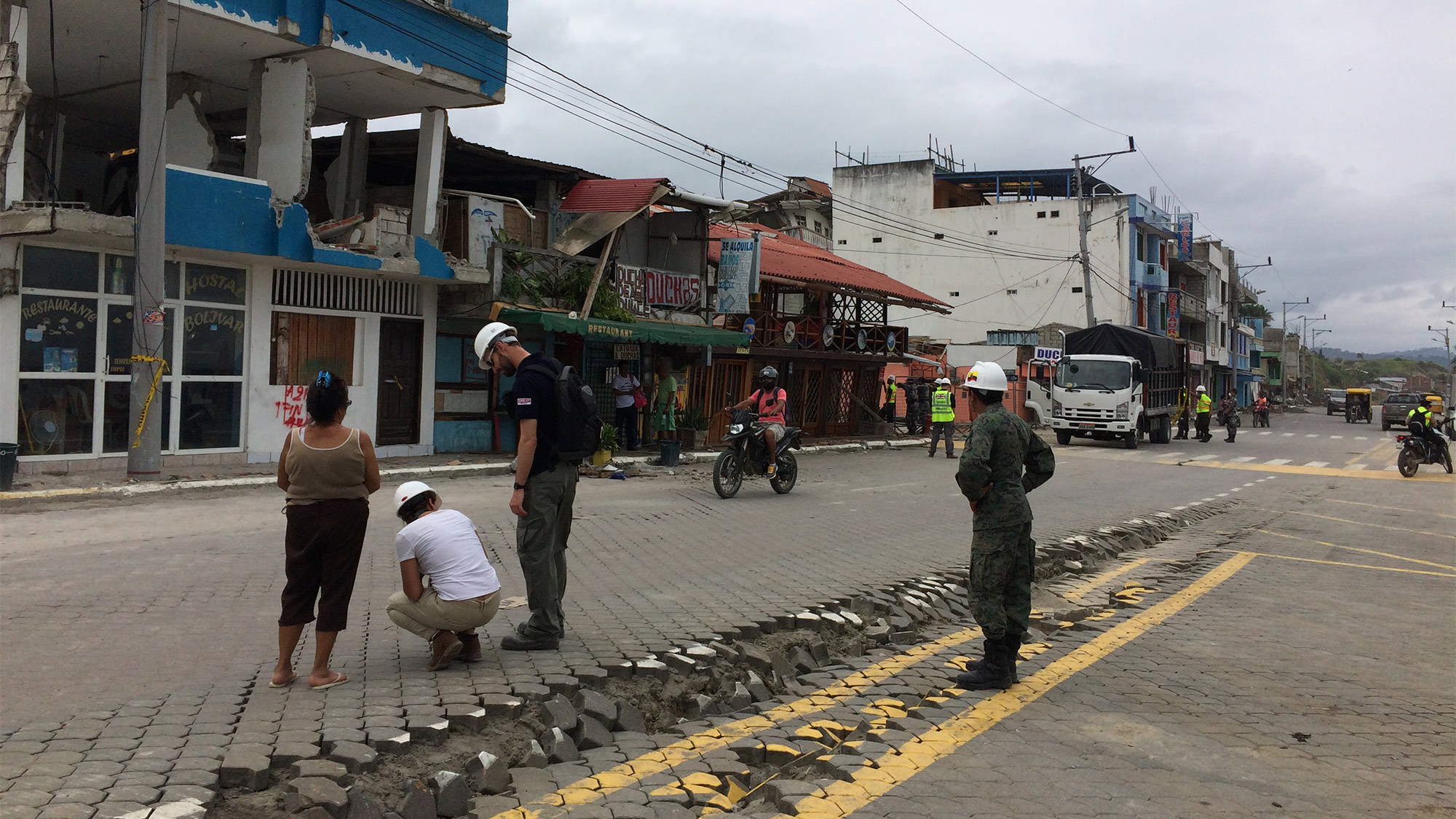 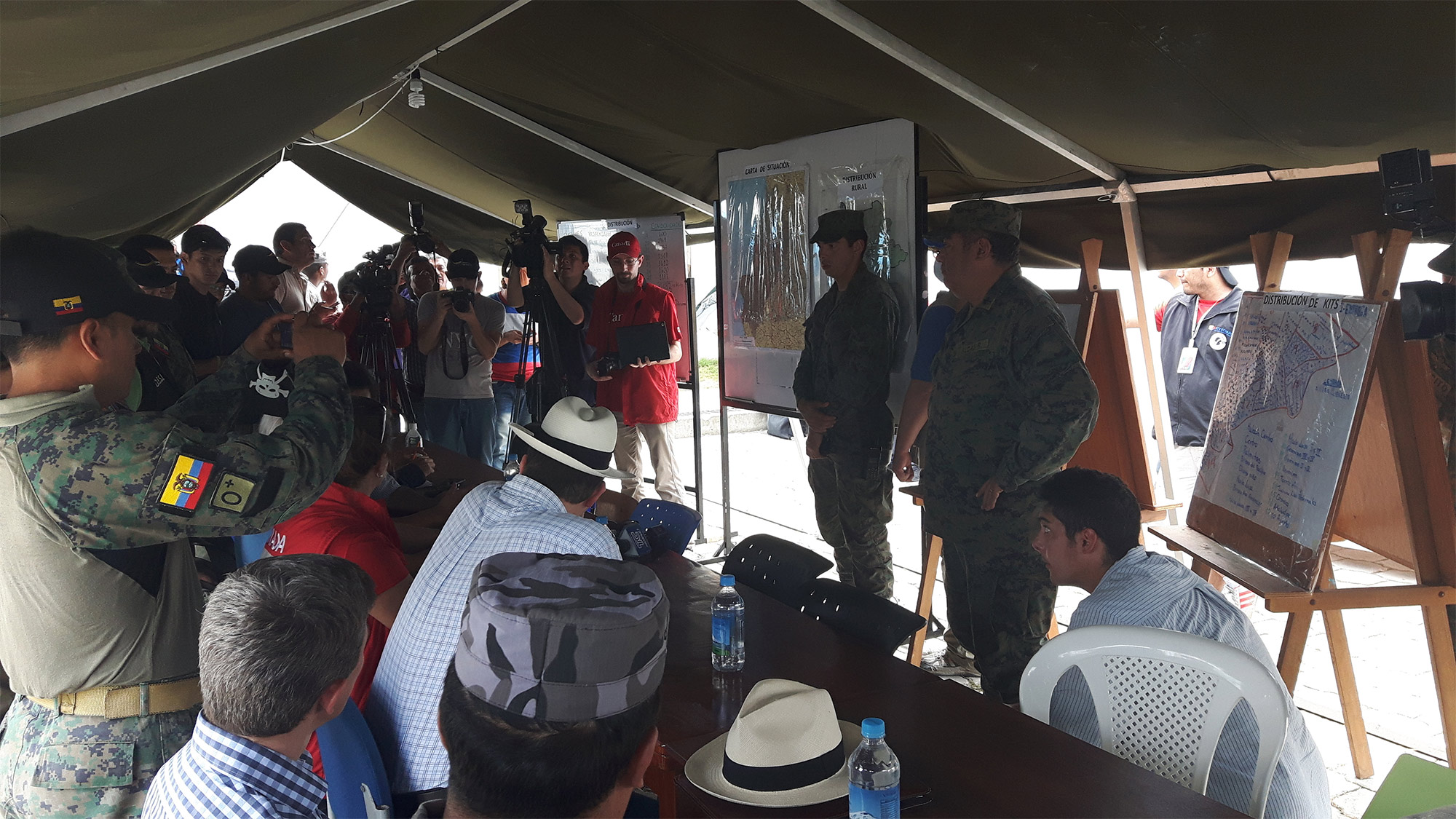 1 of 2
Nearly collapsed building in Ecuador

The work Francisco and I started there continues on a daily basis. We’re still in contact with pretty much everybody we met there. I don’t know what will happen in the future, but there is still a lot of opportunity for learning and a lot that we can do to help.

Question for Anna about this perspective?