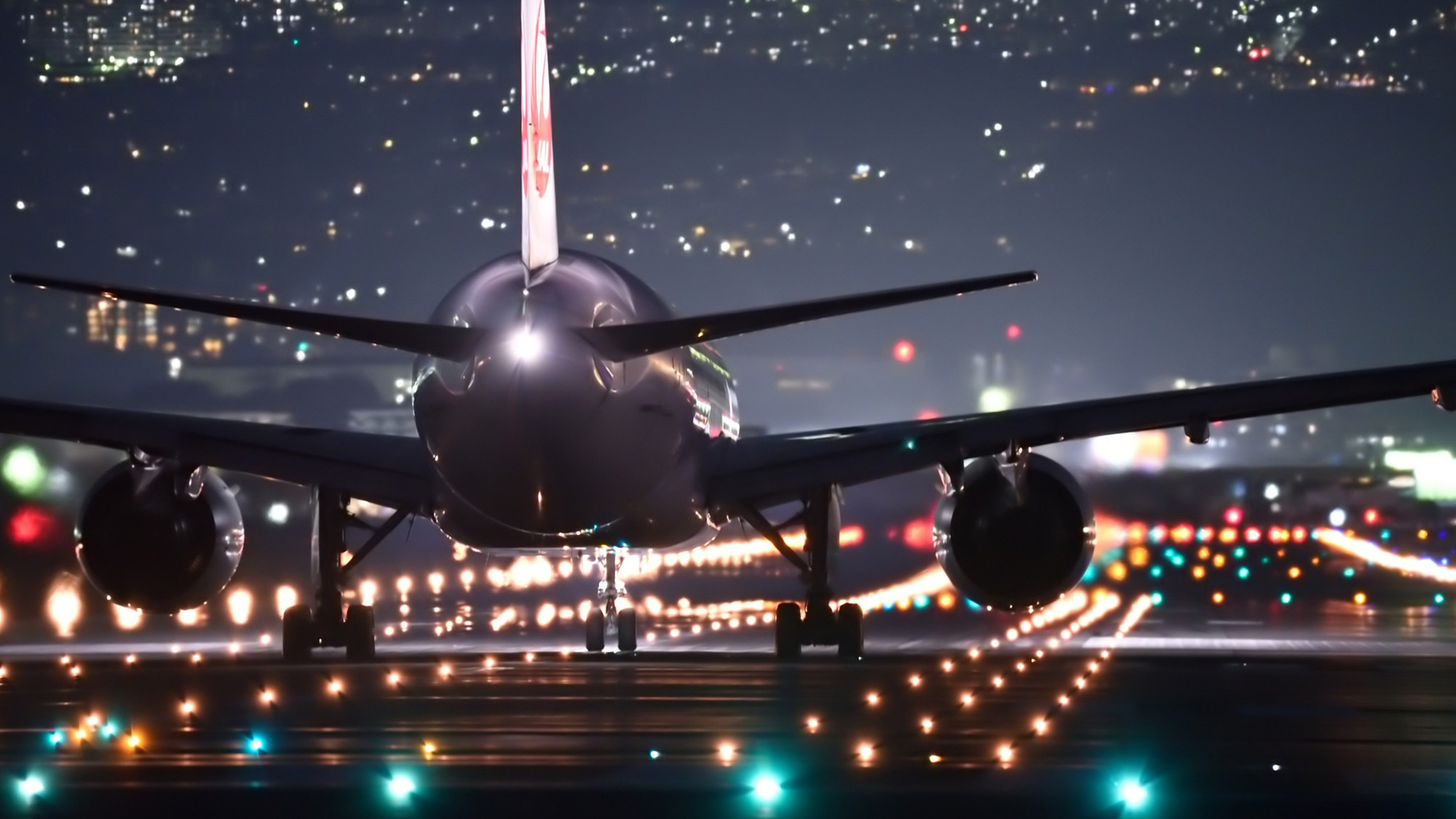 Talk to Martin Howell about this perspective 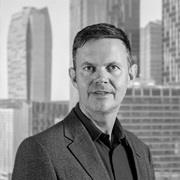 Talk to Martin Howell about this perspective

As an energy engineer working in this space for more than 40 years, I know that continued operability and resilience in the face of major, disastrous events are of paramount importance to airports and the airlines who use them. Yet many airports are still frustratingly vulnerable to these costly losses of power.

Airports, powered like most commercial, institutional, or industrial sites, are generally dependent on their local utility for continuous electricity. If that power goes out, they are required by building codes to have an emergency power system to supply critical life-safety systems, egress lighting, and fire pumps, among other things. Traditionally most airports have used a diesel generator for emergency power supply, which can take up to 10 seconds to kick in, disrupting critical systems. To more securely ensure reliability in the face of growing hazards, the aviation industry has started looking to microgrid technology as an instantaneous and dependable supplementary source of power.

Microgrids are a purpose-built local electrical system that can operate either in parallel with or separate from the utility, providing their own generation and load balancing to achieve stable operations. They often integrate several different local generation resources, including cogeneration engines, fuel cells, and solar photovoltaics, as well as some type of energy storage to allow for flexibility in peak conditions. 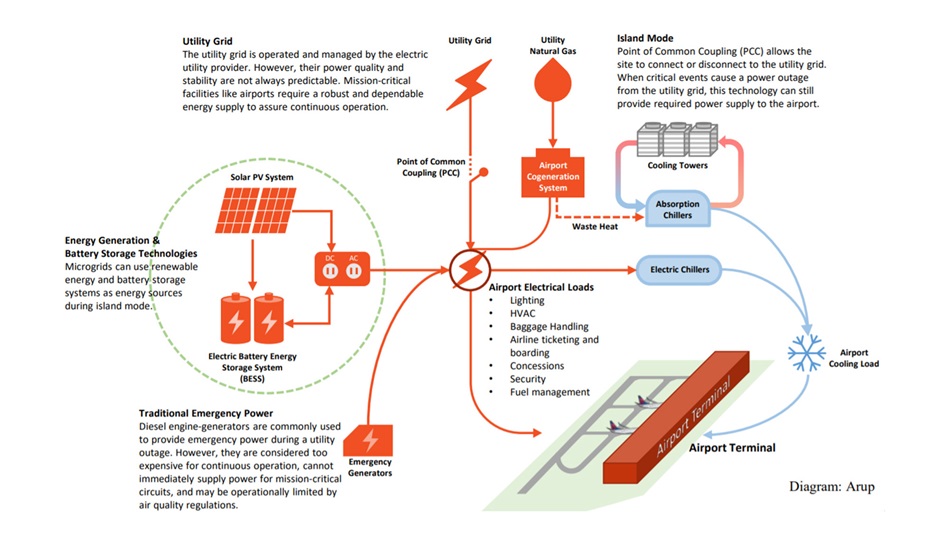 Our five minute guide provides an introduction to microgrids and explains when and how they should be deployed to achieve the desired benefits of improved energy self-sufficiency.

In addition to providing built-in resilience and business continuity, microgrids offer several other benefits. They can synchronize and connect to the grid during normal conditions, while also providing the capability to disconnect and operate independently as an “island” if needed. At certain times, utility energy costs might be high enough that it becomes cheaper for a facility to generate power itself. Additionally, using renewables to displace grid energy can provide sustainability benefits. And finally, power quality issues from the local utility could occur, and a microgrid could mitigate those specific supply problems before they impact the airport.

While microgrid technology isn’t new, it’s relatively new to aviation. In fact, once complete, the John Wayne Airport microgrid system will likely be the first of its kind — but I think certainly not the last.

Initially, our Arup team was approached by the airport to advise on its existing central utility plant and cogeneration system and resolve some of their energy deficiencies. We realized that microgrid technology could help the airport mitigate some of its frequent power quality issues with on-site battery storage and the use of a parking structure already designed for solar panel capacity. We were also able to help John Wayne Airport secure a $1.4 million grant through the California Self-Generation Incentive Program. This funding helps to increase the economic benefits and reduce the project’s payback period. 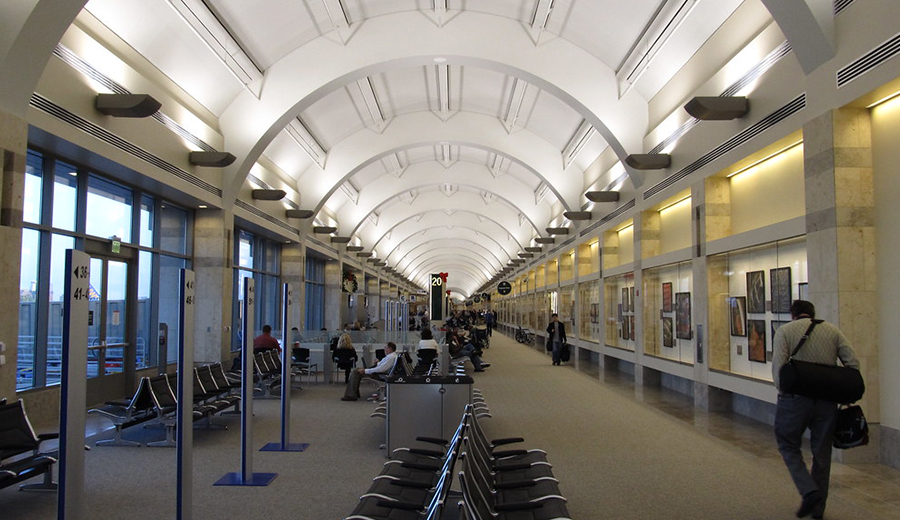 As a pioneering aviation project, John Wayne Airport serves as an interesting case study for this industry, with several unique factors at play. First, microgrid technology is evolving rapidly and continually. For this project we’re working with several advanced energy storage and system control technologies that will be applied in a novel manner for an airport.

Second, we are addressing an industry learning curve for these new types of systems. For example, fire code officials would usually advise us on their requirements for battery energy storage systems. In the case of Orange County, they looked to Arup for guidance on best practices and previous examples of hazard/risk mitigation. This indicates a clear need for information sharing about this advanced technology for both the regulators and the authorities having jurisdiction who must review these installations.

Third, we assisted the airport using a different type of project delivery method called construction manager at risk (CMaR) as an alternative to more traditional design-build or design-bid-build. Under this model, we still have our engineering contract with the owner and we design around their requirements. The CMaR also has a direct contract with the owner, who reviews our designs to provide recommendations based on scheduling, phasing, cost, and constructability at the 30%, 60%, and 90% design phase. That means by the time the design is 100% completed, the CMaR can provide the owner with a guaranteed price for the project that they are then contracted to build. This delivery method can also minimize costly and timely back-and-forth during construction and ensures that the project, once installed, will have met everyone’s concerns and objectives. 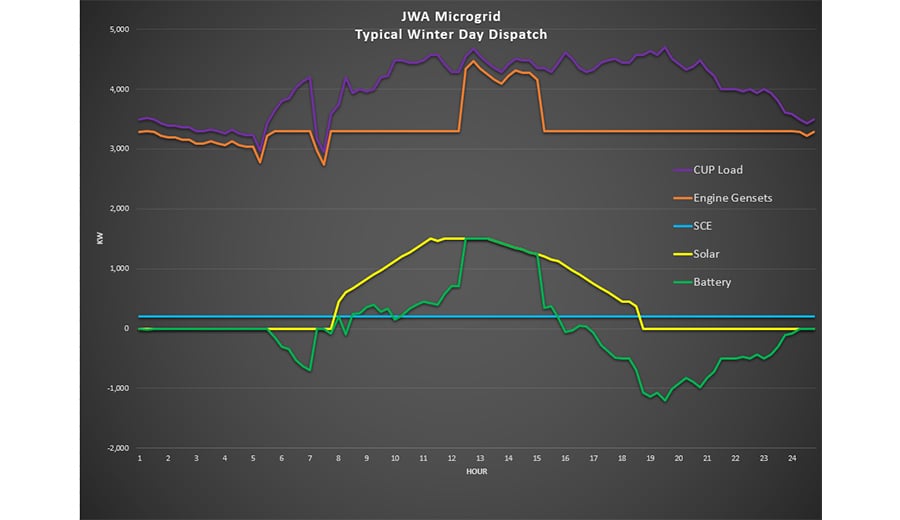 This graphic represents how the microgrid will provide electricity to the John Wayne Airport throughout the day from batteries, solar PV, the local electrical grid, and the four gas engine generators.

Despite its benefits, newer technology can encounter initially slow adoption rates in the somewhat conservative aviation industry. I think microgrids will, however, grow in prevalence due to the indisputable need for energy resilience at mission-critical facilities such as airports. Other suitable users of this technology include college campuses, government agencies, and high-availability operations such as data centers and hospitals.

In fact, some are already adopting this microgrid technology to maintain critical functions. Another Arup client, the City of Santa Monica, is developing a microgrid-based City Yards project as a resilient refuge center for residents to use during natural disasters. In these situations, microgrids can be used to power phone-charging stations, water pumps for potable water, and vital emergency services like communication lines.

Over the next few years, I think we’ll see more microgrid technology being adopted — not only to keep the lights on at airports but to keep us safe, energized, and connected across many crucial aspects of our daily lives. 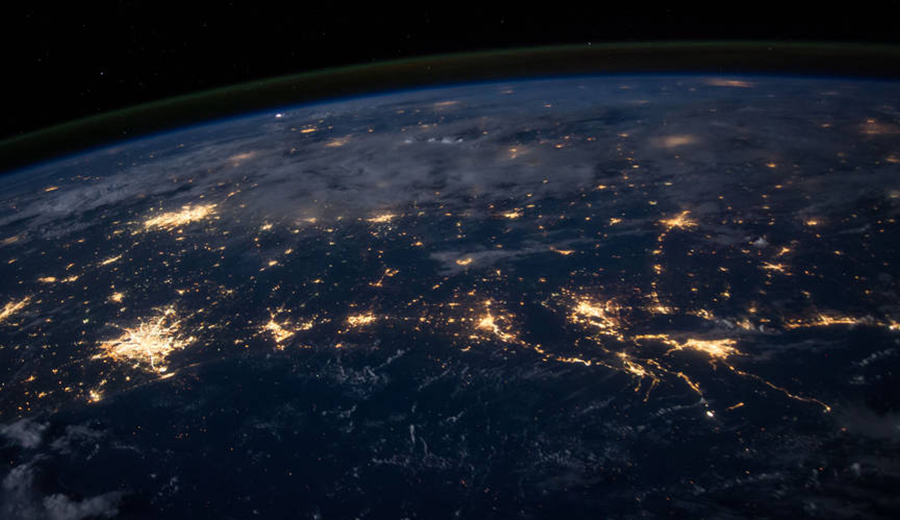