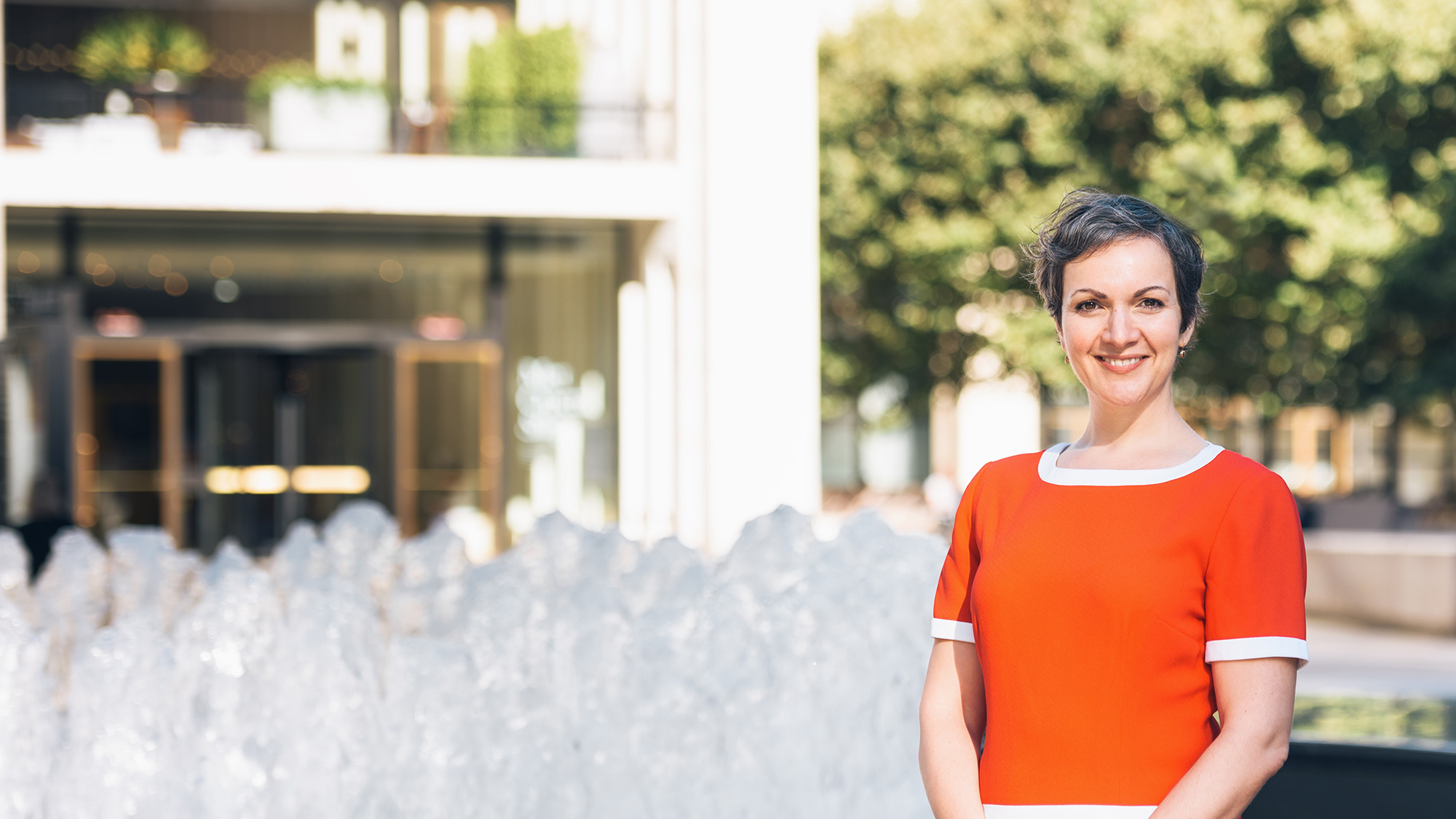 Talk to Rachel Abrams about this perspective 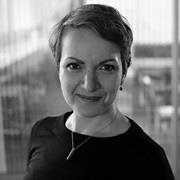 Talk to Rachel Abrams about this perspective

Starchitects aside, we hear little about the individuals whose cumulative decisions shape the built environment. To peer behind the curtain of today’s design field, we’re asking engineers, architects, policymakers, and others about their personal experiences and opinions.

Rachel Abrams co-leads Foresight and Design Strategy in our New York office. Arup’s Kelsey Eichhorn spoke with her about Pulp Fiction, the dangerous semantics of design thinking, and how her background can be explained through rock, paper, scissors.

First off, what is design strategy?

I’ve always thought about design as a verb, not as a noun. It’s a process, a practice, and an approach not only to solving problems, but also to spotting opportunities and making interventions in the world that produce new outcomes — usually positive ones, depending on who’s authoring them. Historically as a design strategist, I’ve hidden the word design perhaps more than I’d like. It’s loaded in certain contexts, and sometimes flagging design as your contribution can be really distracting from the rigor involved.

Then at a basic level, design strategy refers to the part of the arc of design in which you participate. If I’m doing the strategic bit, I’m probably setting up the proposition, rather than responding to the brief. And that brief comes from the framing of the proposition. So I’m distinguishing myself from other designers by saying I’m less of a pixel pusher and more a framer of the range of what’s an appropriate response.

Clearly design strategy is a broad practice with many applications. What is your own personal take on it?

I’ve got all sorts of ways of describing it, and I’ve been described in strange ways depending on which team I’m sitting on. One colleague described me as the cleaner in Pulp Fiction. He’s the guy in the tuxedo who’s been there before, done his time, and had blood on his shirt. And now he comes in, makes a recommendation, and leaves it to the younger boys to sort out.

Another decidedly less glamorous descriptor is that I’m the tile grout… Nobody needs to know that I’ve been here, but if I’m not you’re in trouble. Nothing is going to stick or coalesce without the grout acting as the underlying fortification of the whole process.

But mostly it has to do with knowing how to produce new ways into problems, hopefully with improved results. 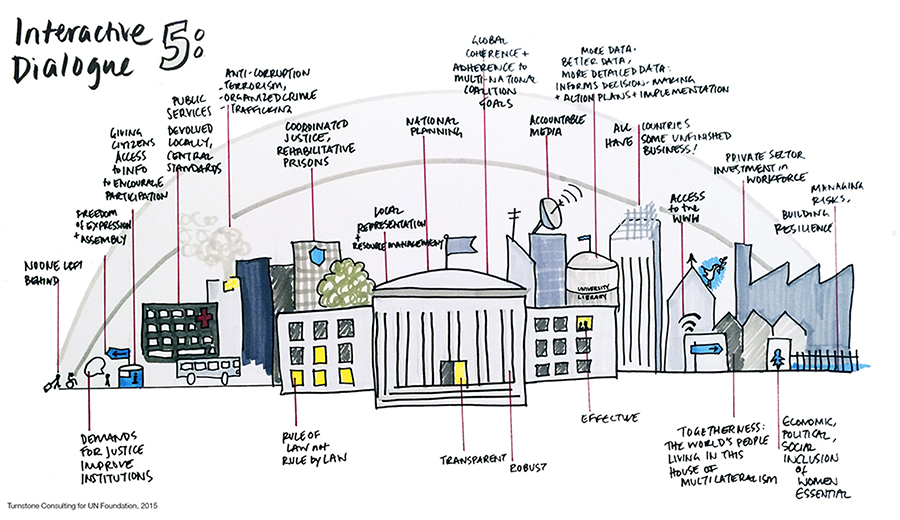 One of two graphic facilitators for the United Nation’s 70th General Assembly in 2015, Rachel recorded interactive dialogues between member states’ leaders as they formally adopted the UN’s Sustainable Development Goals.

Do you make a distinction between design strategy and design thinking?

I think design thinking is a rather dangerous turn of phrase. I’ve always liked the way my former colleague, Dan Hill, describes it. He says design is a practice, not a soluble tablet you swallow and suddenly you’re a designer. And in a similar vein, Natasha Jen, who I worked with at Pentagram, once put up a slide at a serious design conference that said, “Design thinking is bullshit.” Basically the thought is, you can’t just drop design thinking into an engineering firm like an aid package and say, “Okay, now go innovate.” Because it’s not about “I know Photoshop”; it’s about the process of inquiry and the fact that it’s mostly qualitative. And it can seem incredibly loosey-goosey, which can be terrifying for people who follow a very rational process.

I also probably resist using the phrase design thinking because I consider design to be a form of thinking already. So I don’t think we should emphasize the “thinking” part, as it suggests design without design thinking is just not thinking. So that’s a semantic issue, but an important positioning one. 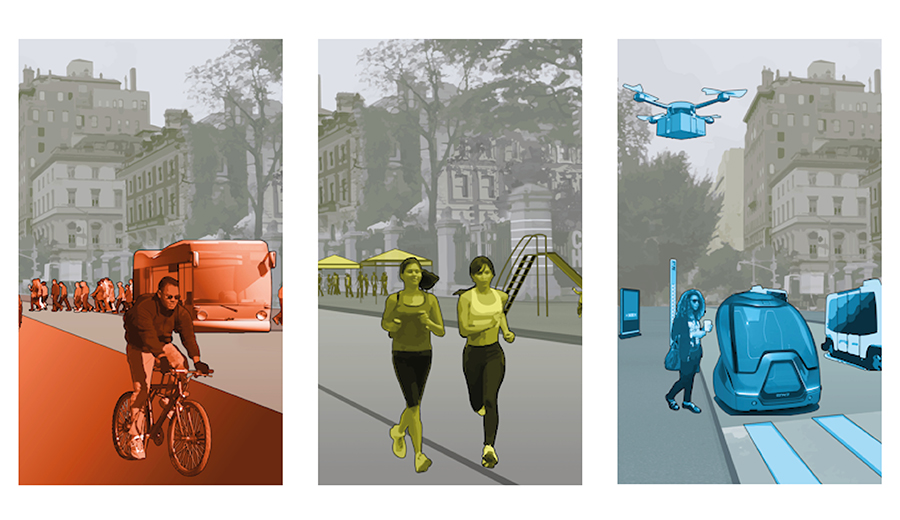 This series of three immersive soundscape experiences was part of an exhibit imagining the future of urban transportation at the Cooper Hewitt design museum.

What was your entry point into design?

It was a little bit random — I’ve had a meandering path. I first studied geography, and looking back, I realize that the way geography was taught, the way we learned about landscape, was actually a form of animation. Because you were taught that everything is a process, everything’s depicted through sequential overhead projector slides, where stage A happens, then stage B, then stage C is the outcome — like key frames in an animation. So when I consider why I’m obsessed with place and visualization, it’s probably because I spent a good deal of my high school education looking at rocks and these sequential processes.

Ultimately, even though I kind of famously walked out of a soils lecture to study social and political sciences — choosing to study man-made systems and politics over someday standing in brackish water in East Anglia — I had an understanding of how to represent processes and how to visualize systems over time.

So from rocks I went to paper, working in policy and government, which taught me that things you create need governance, that materials and objects have rules and constraints. And then you could say my master’s in interaction design was the scissors (to round out a potential memoir title). In design school you cut out the extraneous, focusing on the material and governing constraints, and the context of time and place to respond with, “Okay, now what can you make?”

How do you apply design strategy within your work here at Arup?

Arup is a company that’s very much feet-on-the-ground, building things in the world following a very similar process: here’s a problem defined, here’s a range of solutions to iterate against, and let’s see which one works best after lots of testing. The general activity of what Arup is doing is already strategic and design-oriented.

My background — and the kinds of good thinking and making I’ve been exposed to in over 15 years of consulting in technology, exhibit design, and place-making — has been about products and services. So there’s a nice feeling of, “Oh, I’m just bringing this way of designing smaller transactions, encounters that you experience on a small scale, to something much larger.”

At a certain point, you have to become a qualitative, experiential thinker and a contextualizer. So I’m intrigued to work with engineers, facilitating the change in how teams communicate with one another and with clients, in a way that requires the strategic skills of a storyteller. 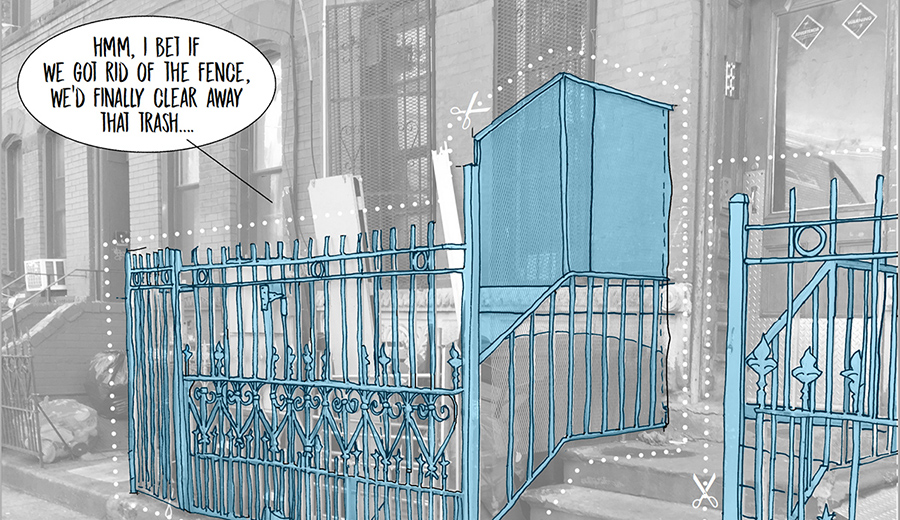 Next City’s 'A Field Guide to Fences' - an exploration of the physical barriers that define New York’s public spaces and private lives - was compiled by Gita Nandan and Elliot Maltby of architecture practice, Thread Collective, and illustrated by Abrams.

Do you find that your work methodology permeates other aspects of your life?

I’d put it another way, which is that the practice of my work is getting closer to my natural temperament. I’m analytical by nature, and I’ve also always had a practical side. I want things to be useful, not an indulgence.

My parents, who are a bit older than most of my peers’ parents, were raised during the Second World War. So I grew up with an understanding that we weren’t always an entirely consumer culture, that other things can matter more. So I think it’s important to have a purpose and to be around people who do as well. If you don’t like what you see in the world, you have the means to do something about it. Now, working at Arup, I’m impressed with the scale and reach of what everyone here is doing.

I would say that my social, political, and design sensibility are still inflected by a British perspective but, at this point, also fed by many other places, people, things. Much like Arup’s.

You’ve lived in New York now for almost 20 years — what about the city has inspired you to stay?

I’ve always been enamored with New York City. This is a place where people say yes as opposed to, “Who said you could have a go at this?” And you’re a dot in a huge legacy of place. But I think I married New York City as naively as someone marries anyone. Then you’re like, “Oh I didn’t know you had that weird side to you. Nobody introduced me to your in-laws.”

Overall though, New York was the right choice, for letting me do all the things I wanted to do, to discover all the versions of the city that I was curious about. The immediacy of what you’re making now as opposed to where you came from, and the ability for people to shake off certain expectations, and when it suits, to code switch.

Every time I think I want to go back to London, every time I want a washer/drier again, some amazing, random opportunity comes up where I get to work with wonderful people. New York is a city that lets you find these things, that lets you ask questions.

And for one thing, I’ve got far too many books here. Books, and shoes, and very dear friends.

Starchitects aside, we hear little about the individuals whose cumulative decisions shape the built environment. Acoustician and Arup Fellow Raj Patel speaks about growing up in London, post-punk influences, and the invisible art of acoustics.

Starchitects aside, we hear little about the individuals whose cumulative decisions shape the built environment. Arup principal and urban planner Margaret Newman talks about her path to urban planning and the varied but essential role that creativity plays in her life.