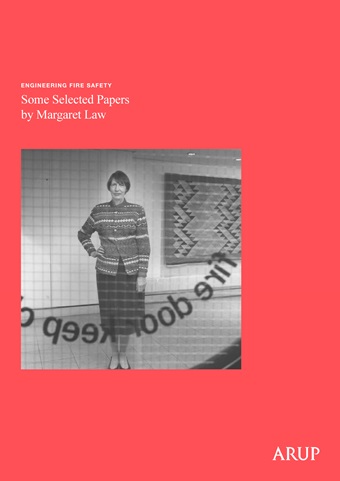 Margaret Law was an outstanding fire engineer and a beloved member of our fire team.

This book contains 29 of her most significant research papers, representing work that she did over the full span of her career from the 1950s through to the end of the century. They showcase her pioneering focus on placing applied and rigorous technical excellence and evidence based safety methods and solutions to the design and construction of the built environment.

Margaret joined Arup in 1974 to act as an adviser on fire engineering. She went on to create innovative fire safety solutions on major projects such as the Pompidou Centre in Paris and Kansai International airport. She was particularly renowned for her work on structural steelwork in fire, with codified methods still relied on today in the USA, UK and Europe.

At the end of 1990, Margaret retired and became a Consultant to the Ove Arup Partnership. Her book of papers “Some selected papers by Margaret Law: engineering fire safety” was produced to honour her achievements when she finished this Consultant role in 2002.

Margaret passed away in August 2017. We have published this second edition as a tribute to her profound influence on the fire safety profession.