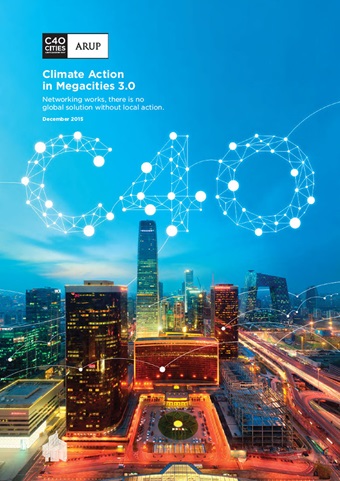 Climate Action in Megacities (CAM 3.0) looks at how the world’s greatest cities are forging a pathway to low carbon and climate resilient development, recognising climate risks and taking more action on climate adaptation, as well as mitigation.

It provides a compelling message that cities are working together to tackle climate change, and they are ready to work with other actors – including nations and the private sector to tackle this global challenge.

Arup worked with C40 through our strategic partnership to deliver this flagship research publication, providing definitive proof that action by city leaders can make a significant difference to achieving a climate safe world.

CAM 3.0 compiles and analyses data provided by 66 C40 cities in 2015, combined with previous data collected from cities in 2011 and 2013. The full database now includes nearly 10,000 climate actions taken by C40 cities during the past 5 years. Representing the largest and most long-term record of city climate action globally, CAM 3.0:

Visit the CAM microsite for a more interactive overview of the findings in the report.

The research is supported by the City Leadership Initiative at University College London (UCL).