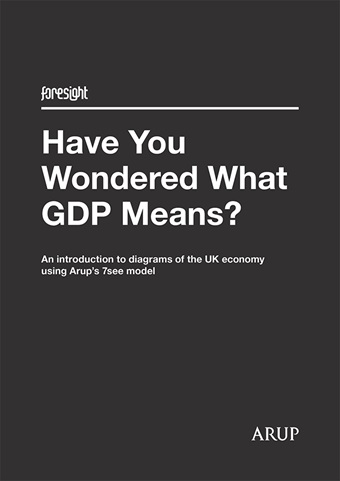 Have you wondered what GDP means?

“Have you wondered what GDP means?” forms part of Arup’s 7see project to model national economies and test the feasibility under physical and economic constraints of future scenarios.

The booklet introduces the metrics for the socio-economic and energy aspects of the model. GDP is explained because it is derived from the same metrics used in the model.

GDP is a highly effective measure of economic activity giving insight into a country’s economy and enabling comparison with other countries. On the other hand, GDP is also viewed by many as a poor measure of standard of living or welfare. Yet few understand how GDP is defined and what exactly it describes.

This booklet is for anyone with an interest in big questions such as how an economy can cut carbon dioxide emissions while mainly maintaining economic viability. The booklet is a door to understanding data so it can be used the right way, appreciating both their qualities and limitations. It is only from such a position that we can make progress.

Have you wondered what GDP means?