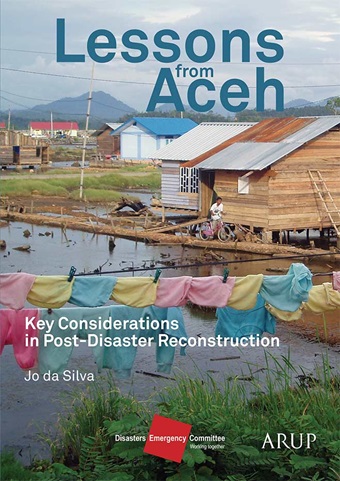 Illustrating the practicalities of delivering a successful reconstruction programme, such as that following the 2004 tsunami.

The Indian Ocean tsunami on 26 December 2004 devastated the coastline in Aceh province on the northern tip of Indonesia, leaving 167,000 people dead and over half a million without homes. This resulted in an unprecedented humanitarian response.

Over the next three years the Disasters Emergency Committee (DEC) Member Agencies collectively constructed almost 20,000 houses in Aceh, in addition to numerous schools and health centres.

In 'Lessons from Aceh' their experiences are used as a case study to illustrate the practical realities of delivering a successful programme and the range of issues that need to be considered, highlighting best and worst practice whilst recognising that there is validity in different approaches within the same response.

'Lessons from Aceh' has been written by Arup on behalf of the Disasters Emergency Committee. It is targeted at senior managers, decision-makers and programme advisers to help them make informed decisions, manage expectations and reduce risk in future responses. The report will also be of interest to built environment professionals, researchers or policy makers.

An important theme throughout is the way in which reconstruction can act as a catalyst to recovery, contribute to long-term development and reduce vulnerability to future disasters. In Aceh the most successful reconstruction programmes have left a legacy that is much more than just bricks and mortar.