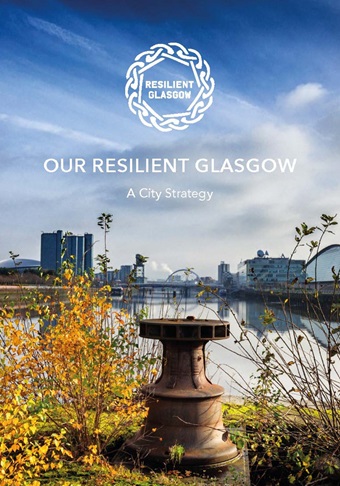 This document introduces the City of Glasgow’s resilience strategy for 2016-2020.

It is the first fully integrated response to resilience in Scotland and the first resilience strategy to be developed in the United Kingdom as part of 100 Resilient Cities – pioneered by the Rockefeller (100RC).

Glasgow’s approach to resilience is shaped by the City Resilience Framework (CRF). The CRF was developed in partnership between Arup and The Rockefeller Foundation and has been adopted by 100RC. Glasgow is the third of twelve city strategies that Arup is supporting as Strategy Partner; others include Bristol, London, Byblos and Vejle.

Our Resilient Glasgow provides an action plan that will be delivered through existing organisations, structural connections and delivery mechanisms. It highlights resilience as an explicit and intended consequence of strategies, initiatives and actions. The strategy commits the city and its stakeholders to action around four themes.

The city’s delivery of their resilience strategy will be monitored using an evaluation framework that will enable city partners to understand how their own contribution can help to secure the city’s long term resilience.