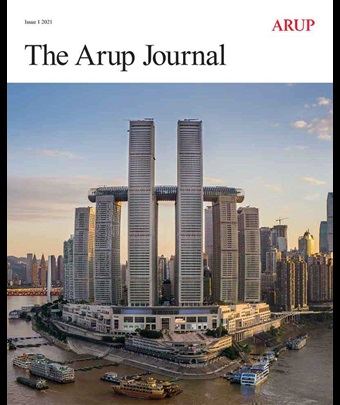 The first issue of The Arup Journal for 2021 celebrates the ingenuity and technical excellence of a wide range of our projects from around the world.

Included in this issue are large-scale developments such as one of the world’s tallest horizontal skyscrapers at Raffles City Chongqing and the Long-Baseline Neutrino Facility a mile underground in South Dakota.

We explore critical national infrastructure projects such as the electrification of The Greater West Railway in the UK, Rose Fitzgerald Kennedy Bridge which is Ireland’s longest bridge and the Central Interceptor wastewater tunnel in Auckland.

Technologically advanced sustainable urban developments, such as the K11 ATELIER King’s Road in Hong Kong, are also featured, along with our design of the Jengu handwashing unit.

Finally, we return to the Ken Rosewall Arena, where in a tight 12-month programme we transformed the former Sydney Olympic tennis arena into a multipurpose venue suitable for use all year round.

All of the work is brought together under the unyielding principle of sustainability and showcases our commitment to creating a built environment that improves the lives of those living within it.