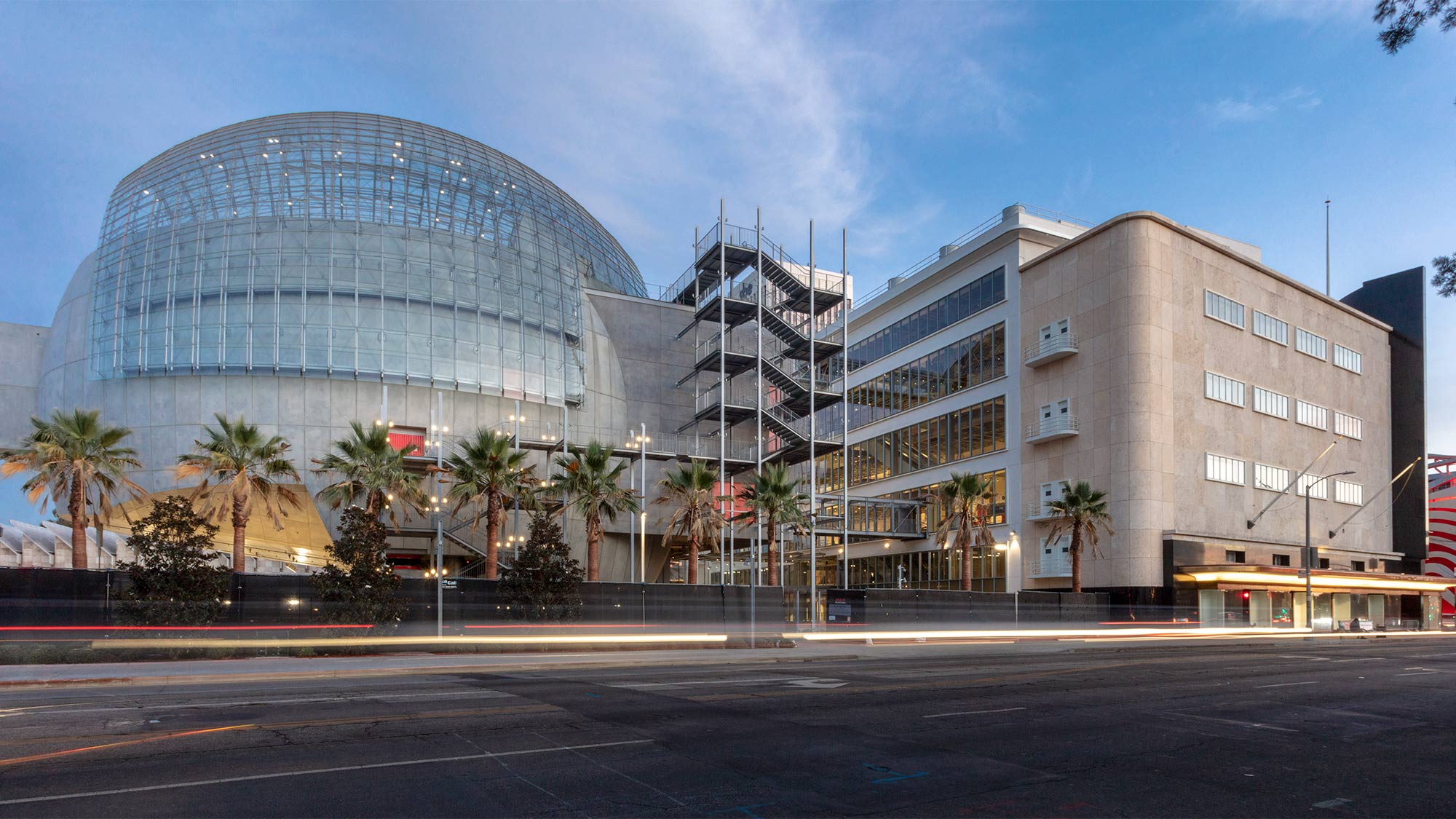 A world class museum celebrating the history of cinema 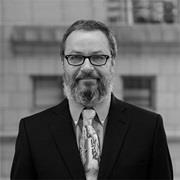 As the newest addition to Los Angeles’ Museum Row on Miracle Mile, the Academy Museum of Motion Pictures is the largest museum in North America dedicated to the arts, science, and artists of moviemaking. The museum features 50,000 square feet of exhibit space, over 5,000 objects, and two cinematic theaters, drawing casual moviegoers and film lovers alike who wish to catch a glimpse inside the world of cinema.

Arup supported architect Renzo Piano Building Workshop (RPBW) and Gensler in crafting an optimal atmosphere for experiencing the magic of the movies. Arup provided theatre and specialist lighting reflectance consulting services that helped to shape both the David Geffen Theater, the 1,000-seat premiere theater of the Academy Museum of Motion Pictures, and the 288-seat Ted Mann Theater. Arup also provided acoustic consulting services to optimize the acoustic environment of the Dolby Family Terrace, a glass-domed lookout. Part of RPBW’s Sphere addition to the building, the terrace offers sweeping views of the Hollywood Hills that can be enjoyed during a variety of events.

Breathing new life into the historic Saban building, which was formerly a 1930s department store, the Academy Museum of Motion Pictures celebrates the to the arts, sciences, and artists of moviemaking. Arup strategically balanced paying homage to the history of cinema and integrating the highest standard of technology in both the museum’s Geffen Theater and Ted Mann Theater. Working directly with the Academy Museum and the Academy of Motion Picture Arts and Sciences’ technology group, as well as some of the best cinematographers and projectionists in the country, we crafted a high-quality cinematic experience. 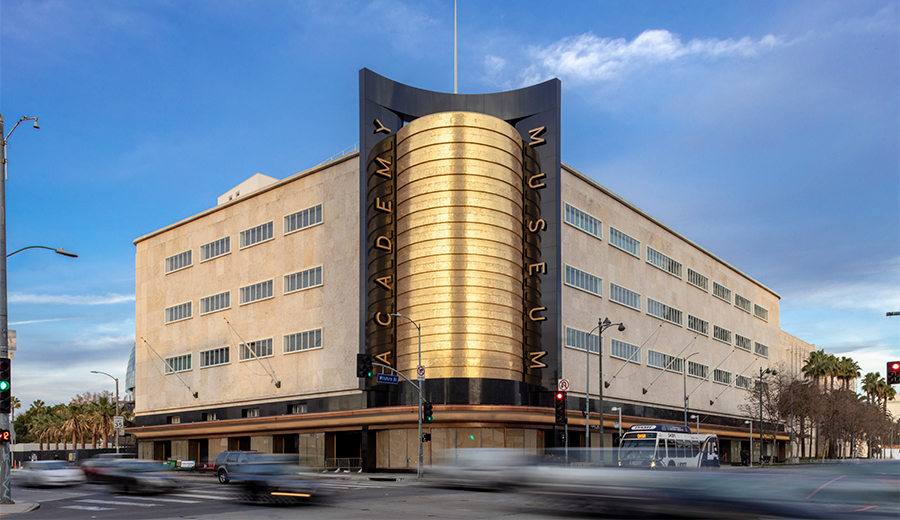 The seating in both cinemas was thoughtfully designed and organized for optimal sight lines and comfort. To create a more authentic atmosphere within the theaters, seats were kept traditional and simple — there are no recliners or cup holders. In designing the Geffen Theater, RPBW envisioned red velvet seats, curtains, and carpets reminiscent of an ornate Old Hollywood art house. Arup helped to realize this vision in coordination with the standards of both the Academy of Motion Picture Arts and Sciences and the Theater Standards Group. To address the concerns of projectionists and color specialists, Arup conducted a lighting study to reassure that the red tint on the seats would not cause an unwanted color shift or become a distraction for the audience. Our study determined that the reflected light from the theater seats would not alter the color of the projected image to a degree that could be distinguished by the human eye. This colorimetry analysis provided the Academy with confidence in the authenticity of the theater’s film presentation while also supporting RPBW in finalizing their envisioned design.

Arup collaborated with RPBW and Gensler to create the Geffen Theater, contributing theatre and specialist lighting consulting to altogether craft an elegant and authentic audience experience. The Ted Mann Theater strikes a different tone, and Arup’s contributions help to expose the cinema machine and emphasize an atmosphere of cutting-edge technology. The two theaters complement each other: the Geffen embraces the history of film while the Ted Mann pushes cinema into the future. ” 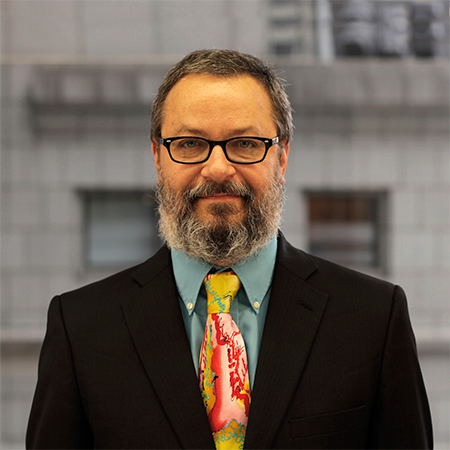 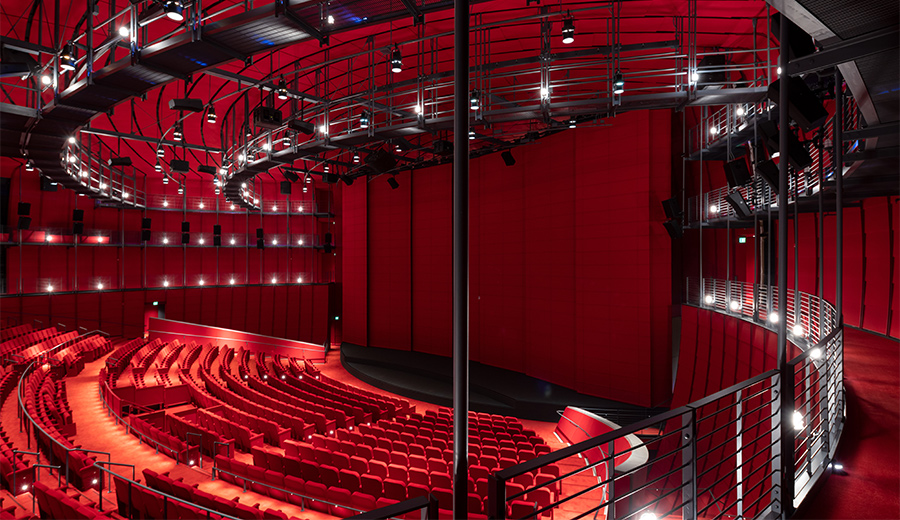 Flexibility for a variety of cinematic experiences

Because film formats have evolved over the history of cinema, the Academy Museum of Motion Pictures is equipped to present a variety of film types at different screen sizes in its theaters. Arup developed an innovative approach to the common screen masking technique, allowing the screen to seamlessly transition between film types as well as be completely covered. The theaters can accommodate film in a variety of formats, including nitrate, 35mm, 70mm, and Dolby laser projection. By quietly moving in four directions, the screen creates an iris effect that crisply focuses in at the perfect proportions for viewing. Arup’s novel approach to the masking technique elevates the screening experience by integrating the moving parts as part of the show and allows the screen to be completely concealed for live performances. 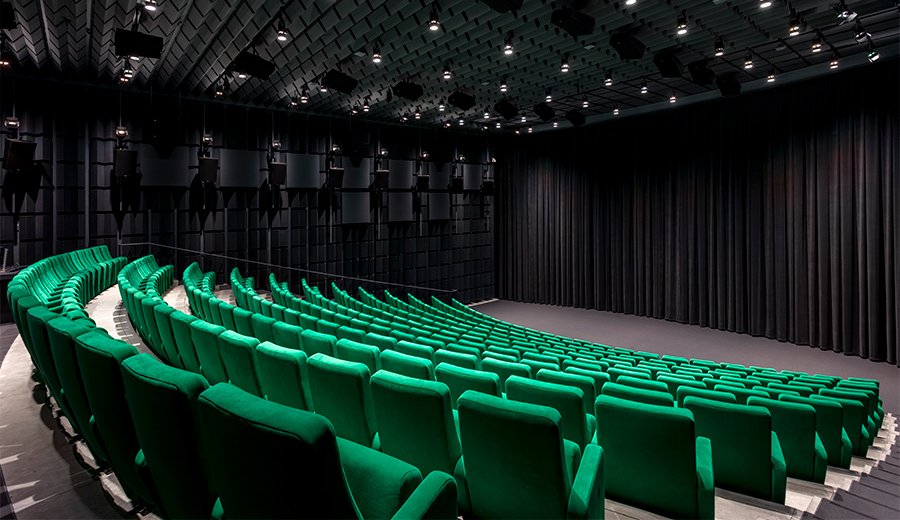 To achieve the authentic art house–feel envisioned by RPBW, Arup incorporated a house curtain to operate simultaneously with the masking technique. The curtain effortlessly folds into the ceiling as the house lights go down, both achieving the Academy’s speed and functionality requirements and aesthetically supporting both film and live event presentations. Arup also designed the production lighting system to support live shows, clip shows, premiere director talks, and interviews, as well as the live broadcast of the Oscar nomination announcements.

As the new flagship of the Academy Museum, the Geffen Theater is well-equipped for any event, from live performances to movie premieres. Arup crafted incredible sightlines for both theaters, ensuring each guest has an optimal view of the screen. In addition, the Geffen Theater can be reconfigured for a variety of events, with removable front seats that unveil an orchestra pit. The front half of the theater has the capacity for a 60-piece orchestra to live score a silent film. The layout can also be arranged to accommodate for a sound booth, and theater lighting can be rigged to the catwalks for special events. 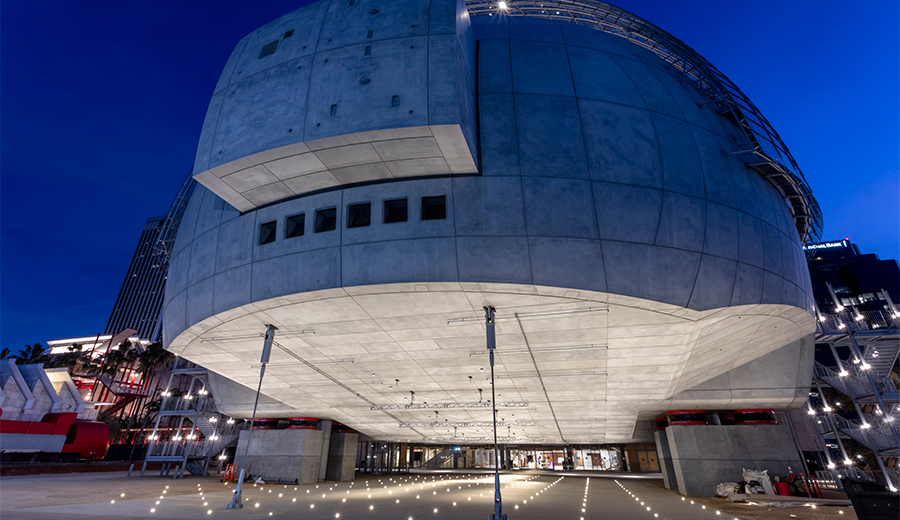 The glass-domed sphere structure features the open-air Dolby Family Terrace. The spectacular views — including the iconic Hollywood sign — create a fantastic atmosphere for events. To understand and develop the acoustic design, the architects asked Arup to auralize the Dolby Family Terrace using our state-of-the-art acoustic simulation tool, Arup SoundLab. Inside the SoundLab, we replicated the experience of standing atop the Sphere during different event types. Through the auralization, Arup provided the architects and the Academy with realistic expectations of the acoustic environment for the future terrace. 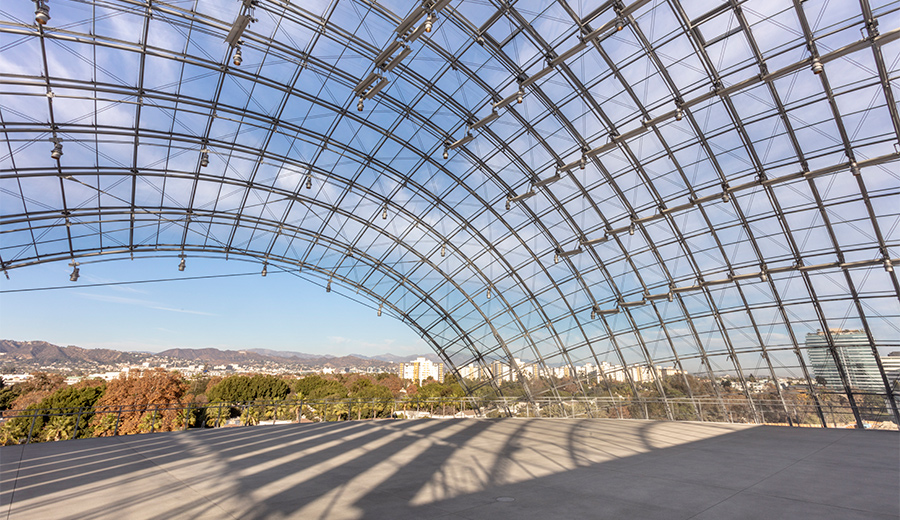 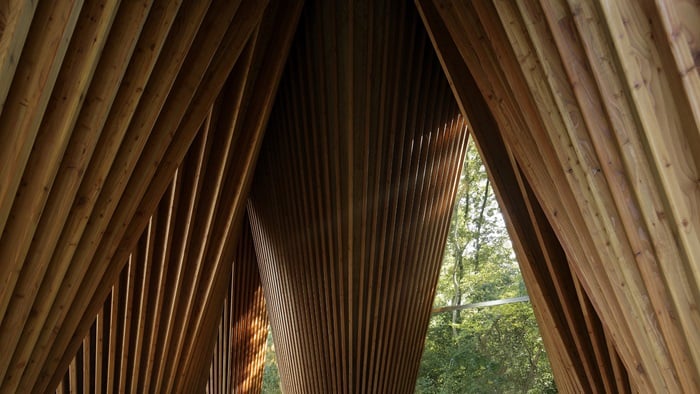 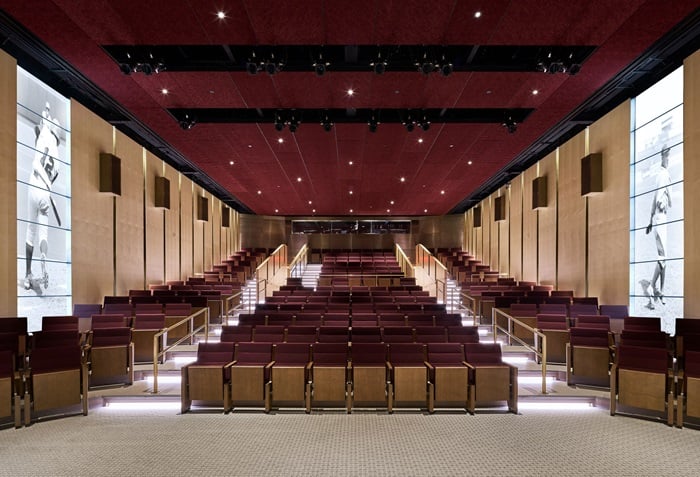 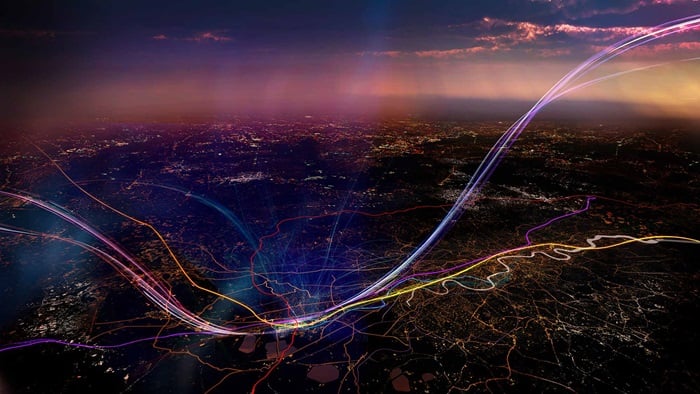