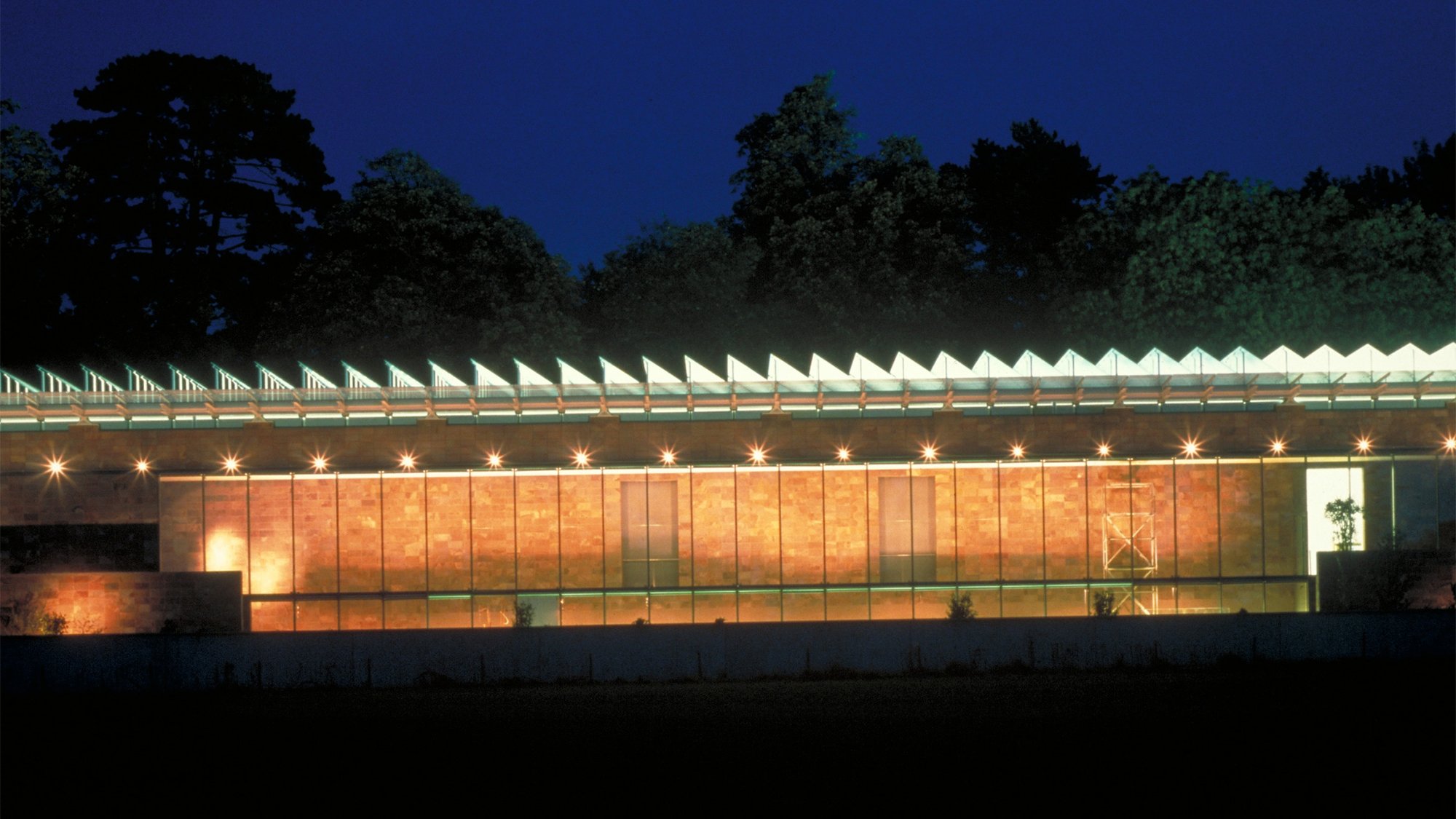 The Beyeler Foundation Museum was designed by Renzo Piano and is located in the municipality of Riehen, Switzerland. The restrained, tranquil design was created to ‘serve art, and not the other way round’.

Arup worked on the project as consulting engineer and was responsible for the structural scheme design, detailed design of the roof including the glazing, services engineering, detailed energy analysis and natural lighting design.

The Museum provides a permanent home for Hildy and Ernst Beyeler’s modern art collection – built up over five decades and ranging from Van Gogh and Monet to Picasso and Rothko, in addition to sculptures from Africa, Alaska and Oceania.

The building is clad in red porphyry – an igneous rock – and comprises four monumental parallel walls with glazed end walls and a glazed winter garden.

The roof is multi-layered, with inclined opaque glass sun shading, a flat double-glazed roof, operable louvers, a glass ceiling and a second ceiling in perforated metal. The roof allows sufficient daylight to illuminate the art on winter days and provides adequate control of sunlight levels on bright days.

The museum’s loft acts as an environmental buffer zone, with passive solar gains in winter creating an insulating blanket above the art zone. The inclined and fritted glass sun shades are arranged to provide an ideal location for the future installation of photovoltaic cells. 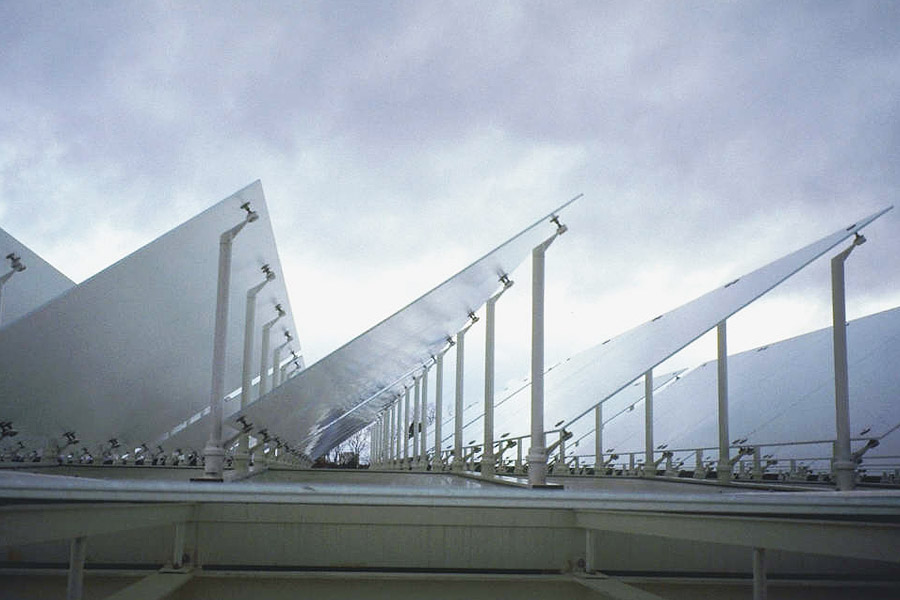 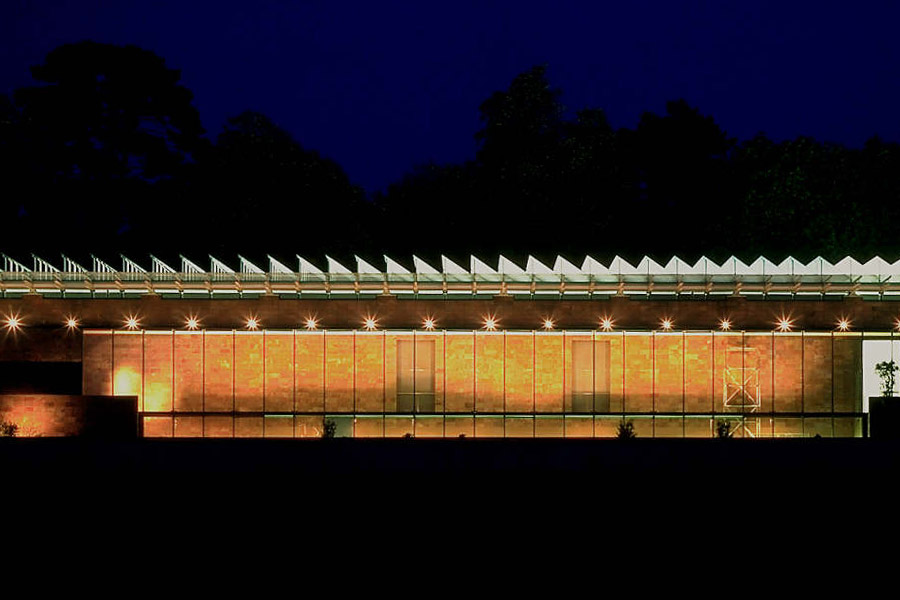 1 of 2
The multi-layer glass roof has an active shading system to keep light levels within predetermined limits.

The structure reflects the architect’s desire for spaces between four long, massive walls with a light crystalline roof structure that overhangs all the façades – controlling the amount of natural light and modifying the internal environment.

Overhangs at the north and south ends of the building are supported by stone-clad steel columns, while at the south end the ground slab extends to form a lily pond stretching into the landscape. The steel roof structure gives continuous support for the various roof layers including the glass ceiling and internal louvers, the double glazing and the posts that carry the glass shading panels.

As well as accommodating reasonably-high snow loading, the building was also designed to withstand a seismic event.

Ernst Beyeler was keen to have quality of colour and generosity of daylight in the Museum. It was agreed that natural light would be admitted across the whole ground floor. The long-term conservation of the Beyeler Collection was also a top priority.

After studying natural light data, Arup recommended a target daylight factor of 4% - about twice that in most European museums – with an active shading system to keep light levels within predetermined limits. This brief was met by the all-covering multi-layer glass roof.

Air conditioning is strongly discouraged in Switzerland. However, priceless works of art require strict climate control to protect them from elements such as humidity.

Specific exceptions were made subject to certain conditions, including a statement of need submitted to the local authorities justifying mechanical cooling and ventilation and a dynamic analysis of annual energy to demonstrate that the building was as energy-efficient as possible.

The galleries are protected from climatic extremes by thermal ‘buffer’ spaces on the roof and the east and west sides. In the roof the heated and ventilated ‘loft’ means that despite the 100% glazed roof, perimeter heating is only needed in the galleries with windows directly to the outside.

The roof shading scheme is external fins in white diffusing glass with only 30% transmission. Further shading is provided by motorised blinds in the loft and a light-diffusing perforated suspended ceiling in the galleries.

A true displacement system was designed to reduce air velocities to a minimum around the artwork. The air is emitted at barely-perceptible velocities from purpose-built wooden linear floor grilles which can be removed for cleaning or access to electrical sockets.

Air supply to each gallery module is controlled by variable air volume boxes mounted in a services corridor at basement level.

The panel composition selected was a pane of heat-strengthened glass, laminated on top of a toughened glass panel. Although contrary to the conventional practice of placing the toughened layer on top, this design ensures that if the lower, toughened glass breaks, the upper layer prevents collapse, complying with the safety plan.

A test programme written by Arup’s facade engineering team simulated the effects of maintenance personnel and snow and wind loads, confirming the panel’s behaviour if accidental damage caused the toughened layer to fail. 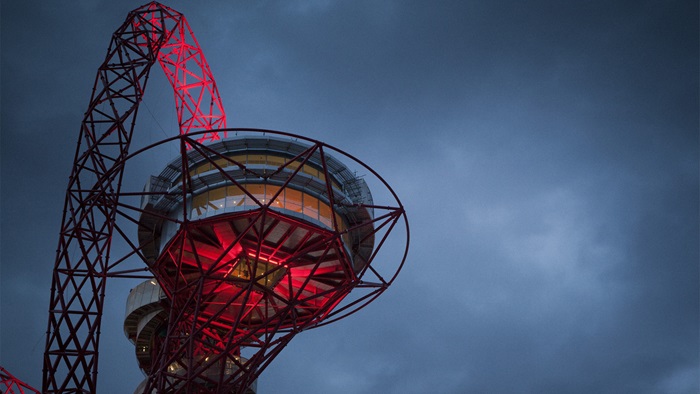 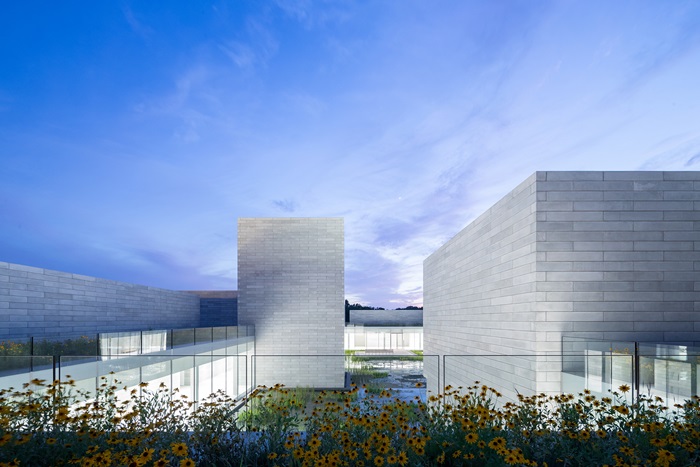 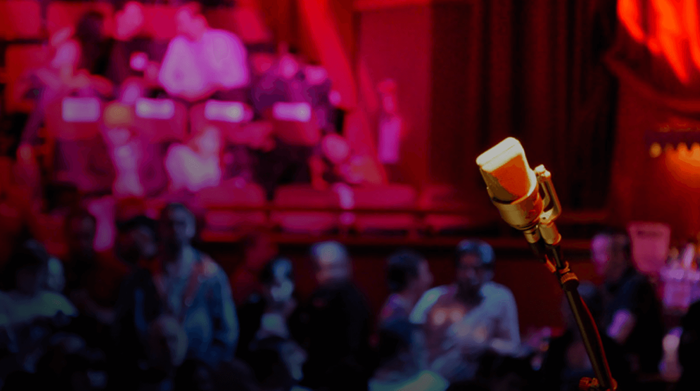