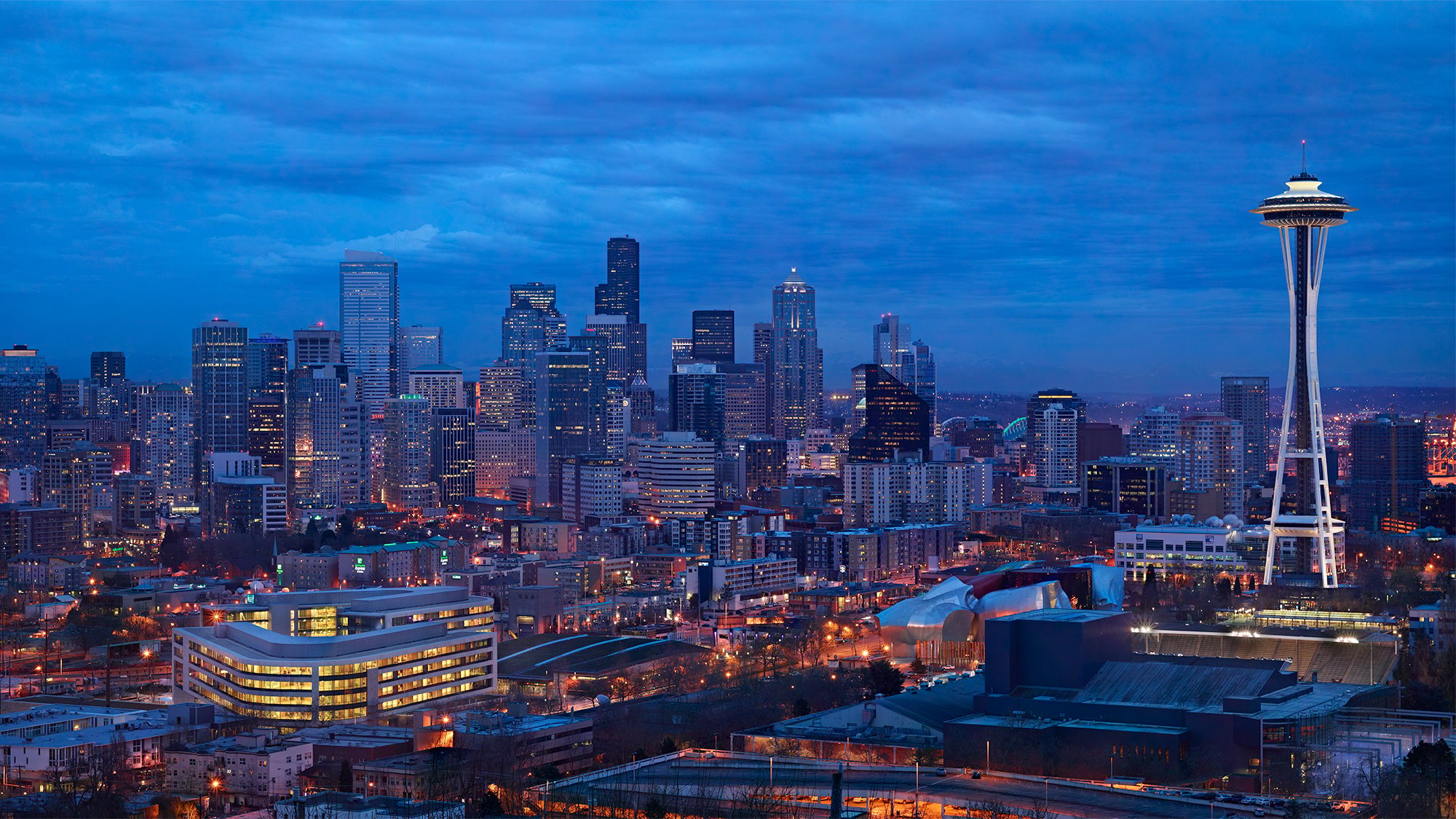 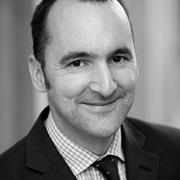 Opening in July 2011, the new 900,000ft2 LEED® Platinum for New Construction Bill & Melinda Gates Foundation reflects its commitment to philanthropy and its roots in the Pacific Northwest. The Foundation and design team's goal since the beginning of design was to make sure that sustainability was incorporated into all aspects of the campus. In October 2005, Arup's Seattle office joined the NBBJ-led design team to help them achieve these goals.

The campus spans 12 acres in downtown Seattle and replaces an asphalt parking lot with a facility that returns more than 40% of the site back to green space through two acres of living roofs and native plantings. At 900,000ft2, the project demonstrates how large-scale sustainable architecture and engineering can be delivered at the highest level, and becomes the largest, non-profit LEED-NC Platinum building in the world.

As part of an integrated and collaborative team including NBBJ, Sellen, Seneca Group, Gustafson Guthrie Nichol and others, Arup’s contributions to the project included structural, mechanical, electrical, and plumbing engineering, as well as façades, acoustics, information-communications, materials, and audio-visual consulting.

This is a fantastic achievement for the project and the team that delivered this outcome. Perhaps most satisfying is that this sustainability achievement was the result of an integrated and engaged design process, not a race to acquire points. The design choices that the team selected have resulted in a high performance building. For example, the mechanical systems were selected for their return on investment, operations, and maintenance considerations, future flexibility, and their ability to improve the indoor environmental quality for the staff. ” 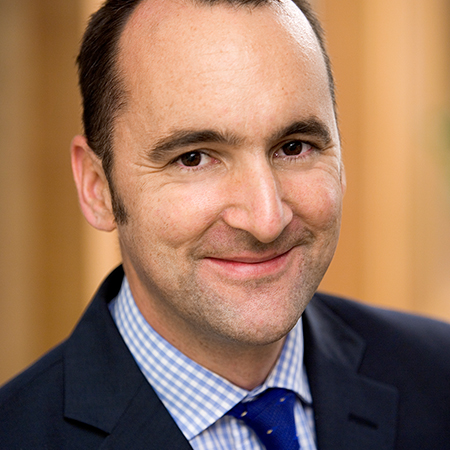 The underlying currents of the foundation’s sustainability goals were the creation of a superlative workplace for its staff and a respect of the greater environment. A one-million-gallon rainwater storage tank underneath the campus is responsible for the majority of the water conservation. The two acres of living roofs absorb a significant amount of the rainwater runoff and the remaining roof and hardscape runoff is collected in the rainwater storage tank, cleaned of pollutants and filtered back into the campus for reflecting pools, irrigation, and toilets.

The project started seven years ago with the initial goal of supporting the City of Seattle’s LEED Silver civic mandate. The goal was never LEED Platinum; it was simply to design the right building for the foundation staff and surrounding community. We had a mantra of ‘do the right thing’ and that’s what drove the various green building decisions. It just so happened that the best solutions were also the greenest.

The project received a National Certificate of Recognition in the American Institute of Steel Construction's 2012 IDEAS2 awards, which honour innovation in structural steel design.

The campus includes a variety of energy efficiency strategies, like a roof-mounted solar energy system which provides energy for more than one-third of the hot water use. Below the surface is a 750,000 gallon thermal energy storage (TES) tank. This has several key positive impacts:

A sustainable campus was a natural result of the foundation’s overall philosophy, keeping in line with values to be a good steward and positive addition to the neighborhood. We share this [LEED-NC Platinum] award with our many partners on the project – who all shared a common goal to build the right building for foundation staff to do their best work, while keeping an eye on mitigating impact to the local community. 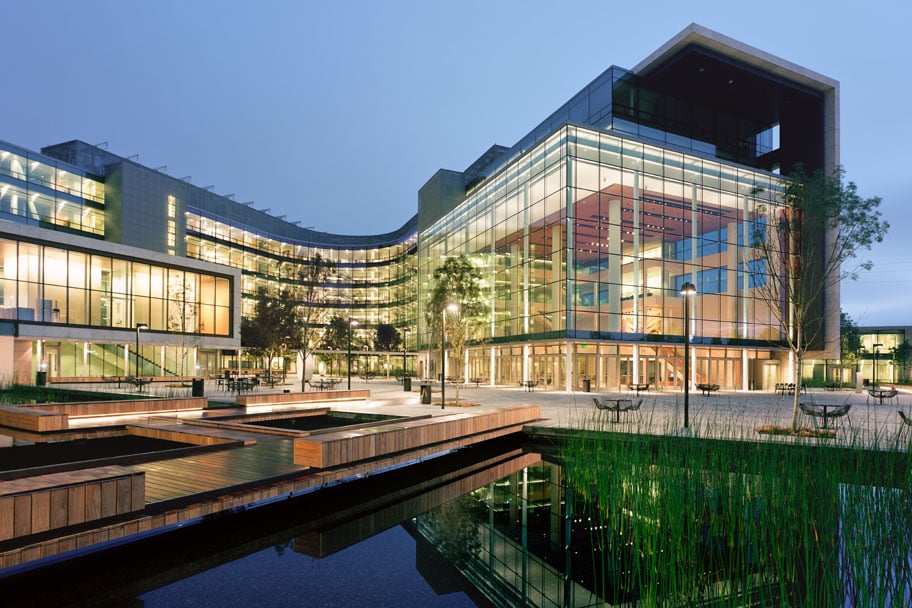 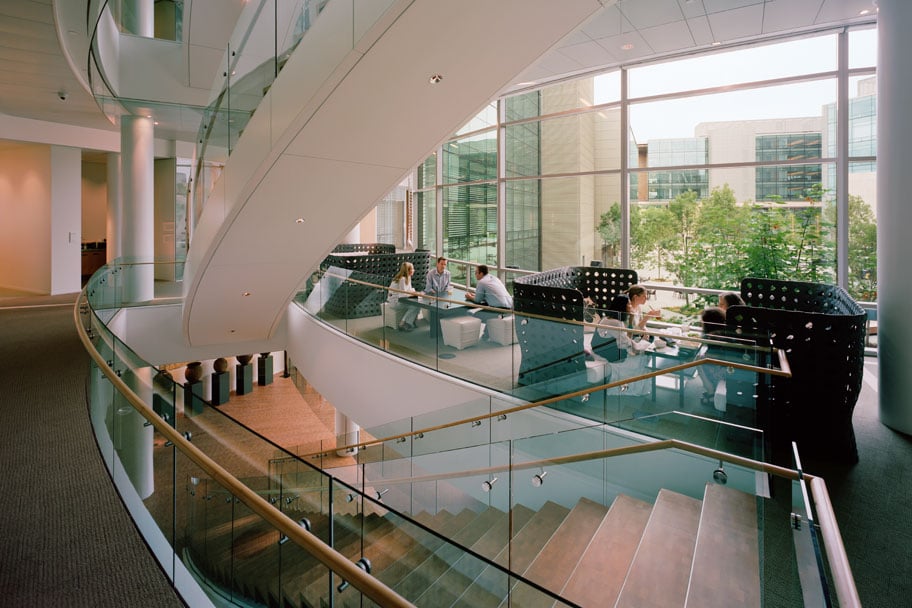 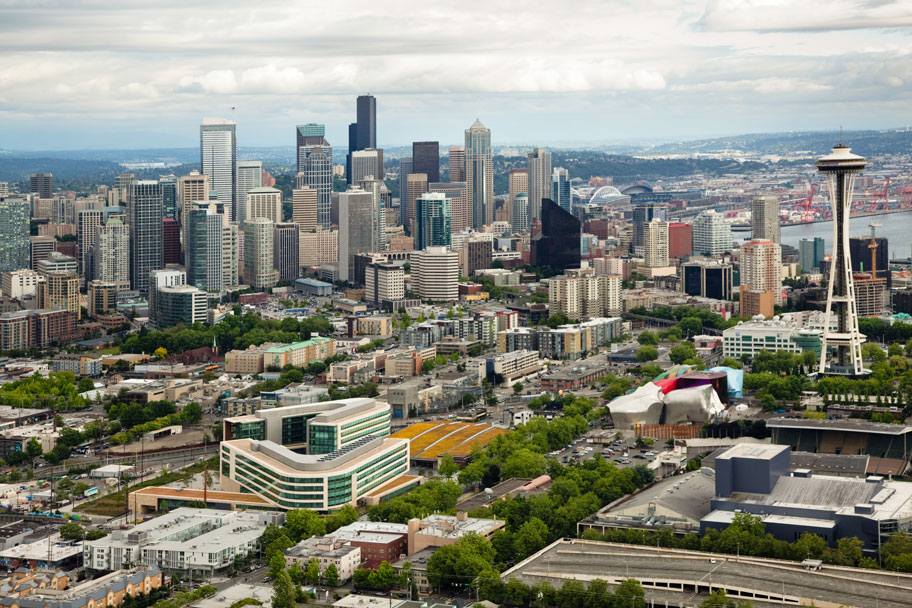 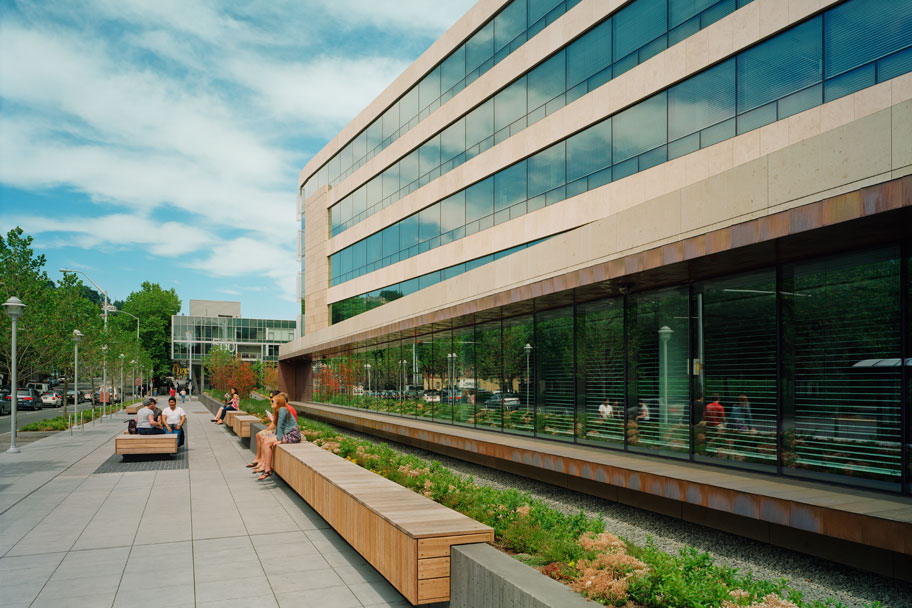 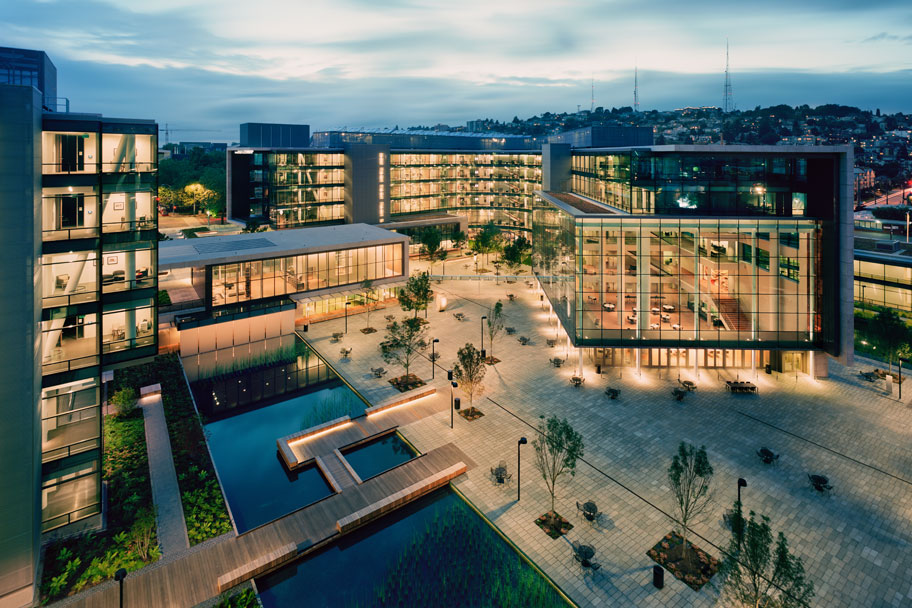 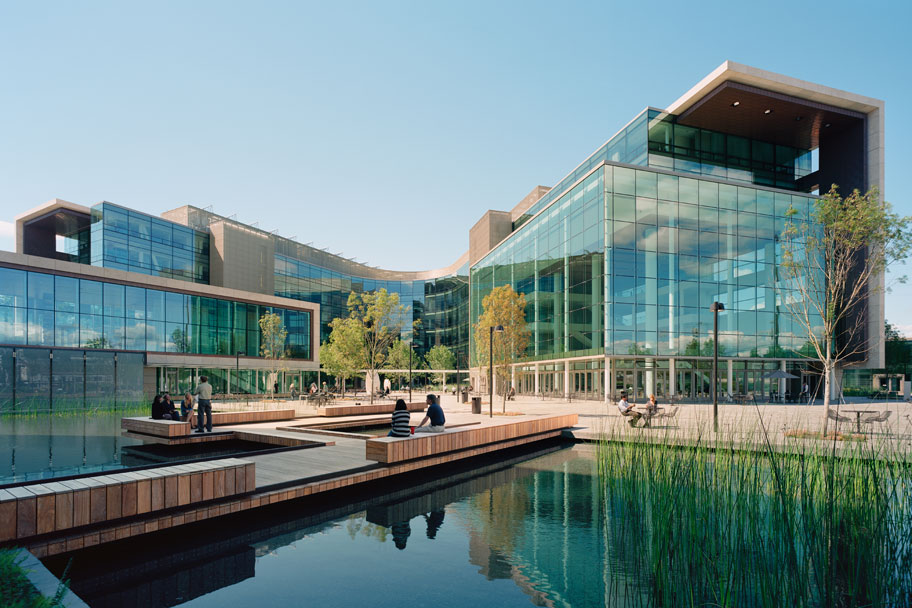 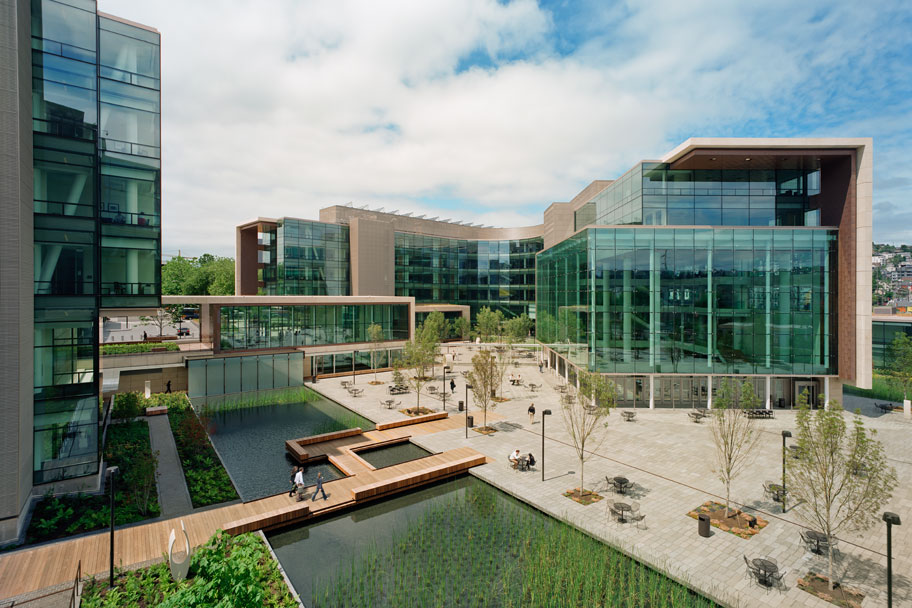 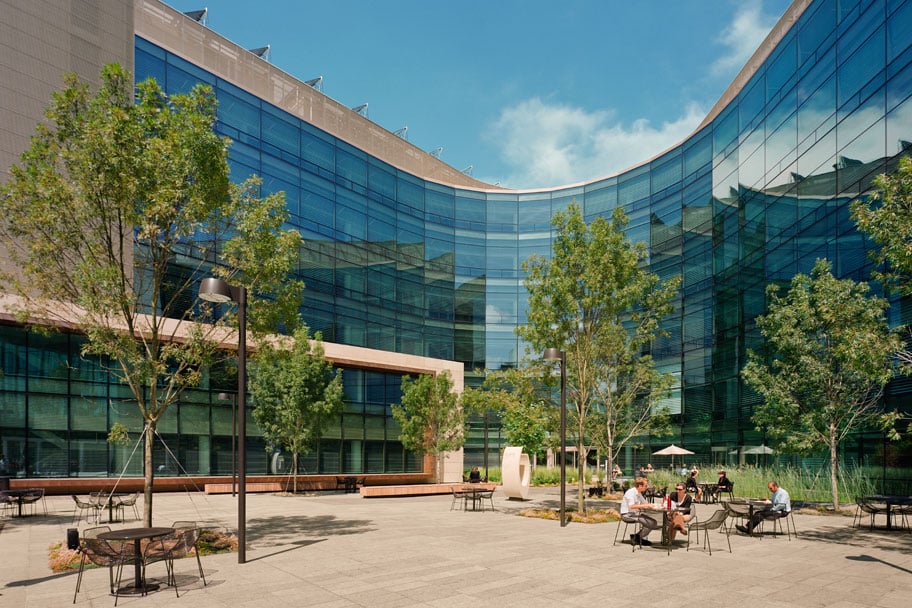 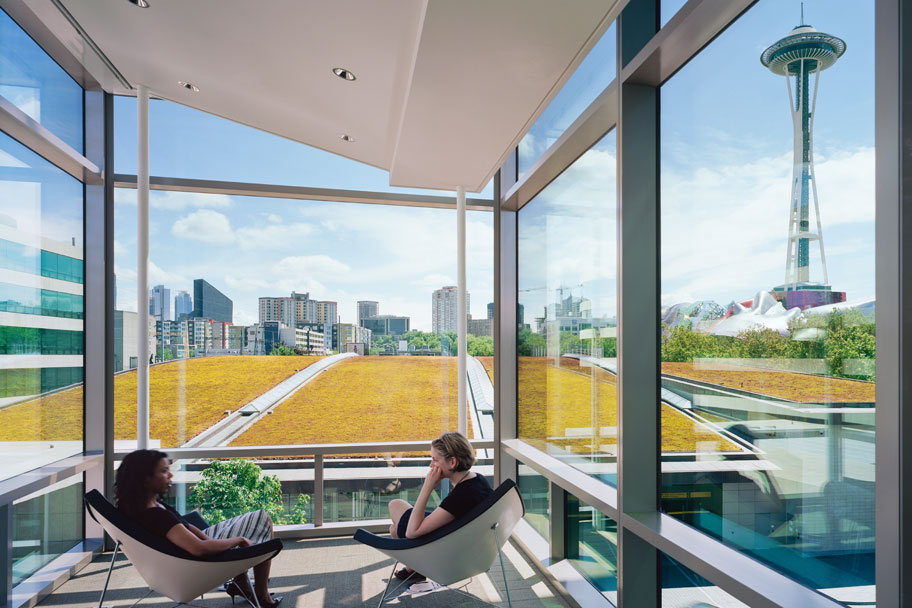 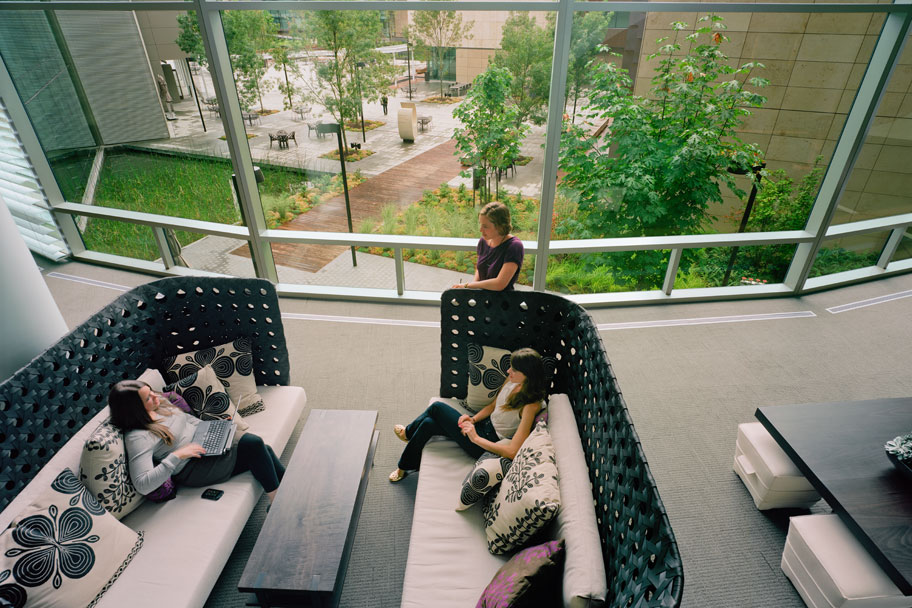 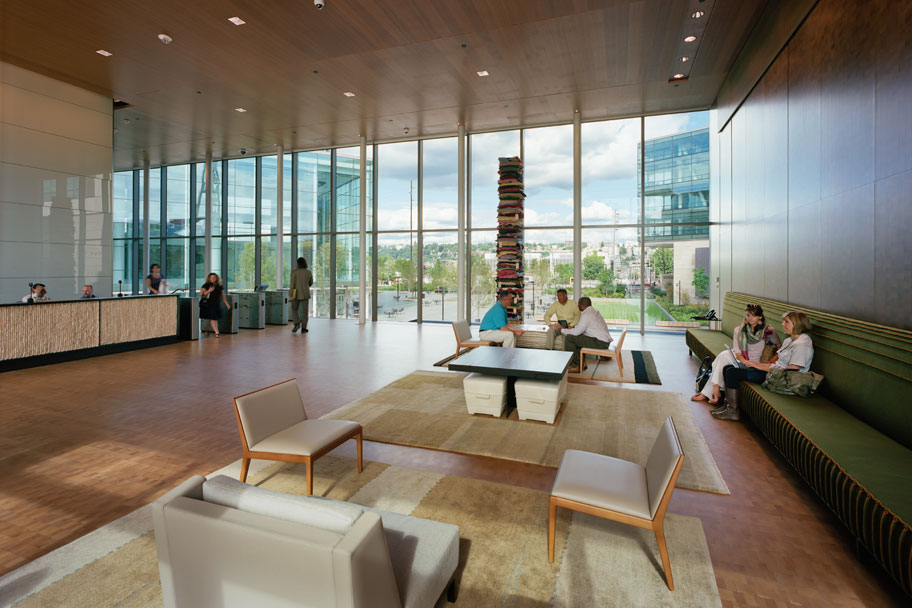 In order to achieve the design team's rainwater harvesting goals, Arup's plumbing engineers, working with partner firms GGN and KPFF, had to verify how much irrigation water was needed for several acres of planting and how much evaporation was likely to occur from tens of thousands of square feet of water features. The result was a 940,000-gallon tank that’s the size of 1.5 Olympic-sized swimming pools. Located in the corner of the basement that didn’t have anything else programmed for the space, it saves the campus 2.5 million gallons of water each year.

Early in the schematic design stage, Arup's acousticians brought a portable SoundLab to the Foundation and NBBJ offices to demonstrate differing levels of speech privacy they could achieve with various wall partition constructions.

Identical prototype offices were mocked up from each manufacturer, and the Arup acoustics team took real sound recordings of the acoustic performance and speech privacy level that each provided. For this sound modelling exercise, NBBJ and key foundation stakeholders visited Arup’s permanent acoustically isolated SoundLab in San Francisco to listen to the difference.

The SoundLab helped the client and design team understand how a variety of design aspects impact the acoustic environment, which in turn influenced both comfort and productivity in the Foundation's offices.