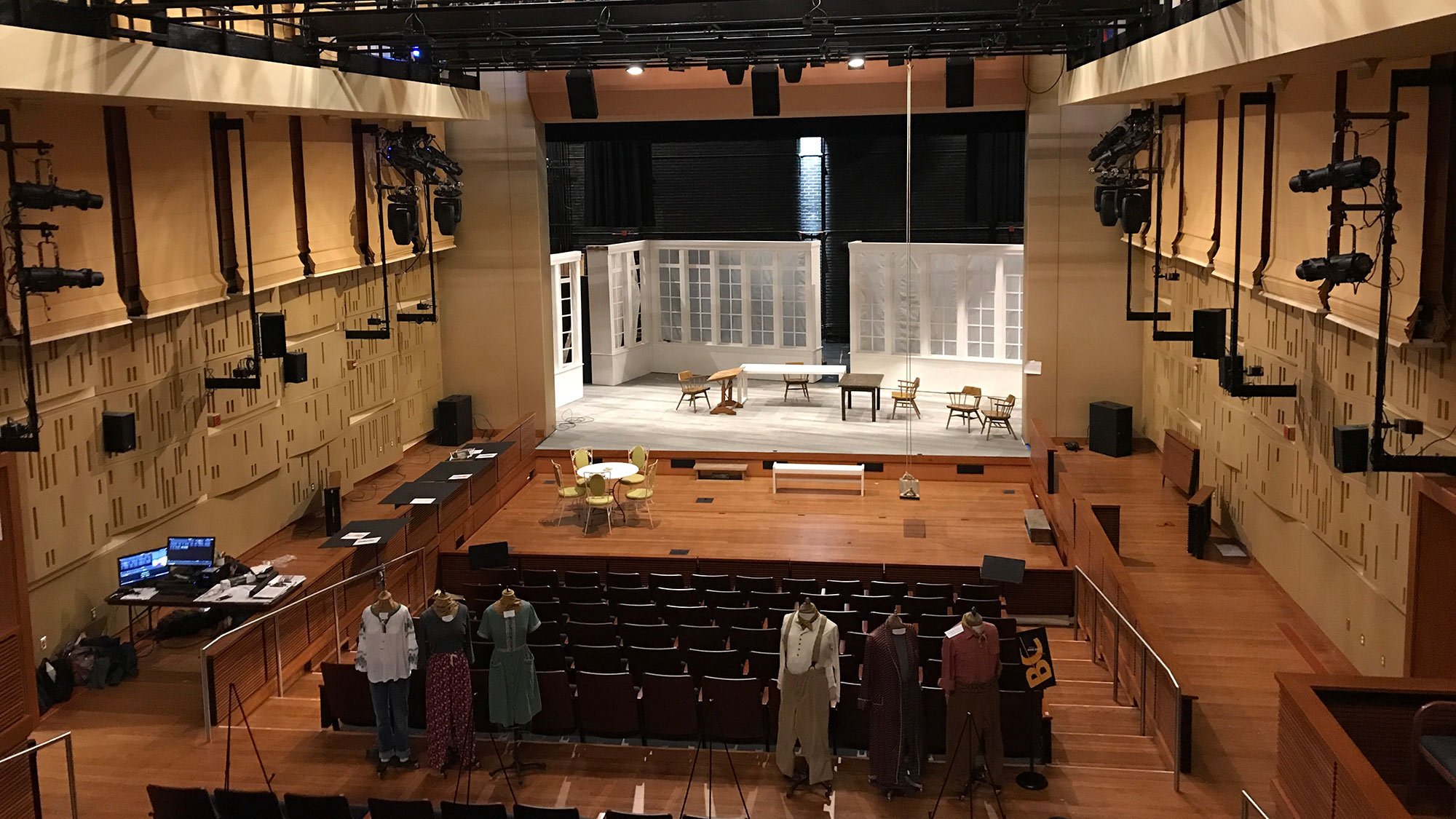 The Leonard and Claire Tow Center for the Performing Arts, Brooklyn College 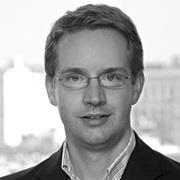 Named after alumni Leonard and Claire Tow, the Tow Center for the Performing Arts was designed as both a performance venue and a dynamic facility for the training of future professionals in music and theatre. The centre houses the 225-seat Don Buchwald Theater, designed to provide excellent acoustics for live music and drama performance; orchestral and choral rehearsal rooms; a theatre rehearsal room; and over 30 acoustically isolated rehearsal studios for small group instruction and practice.

The recital theatre meets the needs of both the musical and theatrical departments by including an operable acoustic banner system that can change the room reverberance for each usage type, a custom orchestral shell that uses an innovative garage-door type mechanism, and two automated stage lifts.

A previous Brooklyn College facility, Gershwin Hall, was partially demolished to provide the space needed for the new Tow Center. Early in the design, a large brick sewer pipe serving Brooklyn was discovered running directly underneath part of the proposed site. To avoid placing any additional load on the pipe, Arup and Pfeiffer Partners developed a structural and theatre design solution for the centre that reused the existing stagehouse of the previous Gershwin Hall. Building off the old hall, they added a new, state-of-the-art theatre to support a 21st century education and performance venue.

Sustainability and the arts

Performing arts buildings are not typically energy efficient due to the large electrical and heating loads associated with high-occupancy performance and rehearsal spaces. The Tow Center successfully achieved LEED Silver status as a result of close collaboration between the sustainability and engineering disciplines. The design includes low-flow plumbing fixtures to reduce potable water use, motion sensor lighting controls, and energy-efficient heating and cooling systems. During construction, the team targeted a minimum of 30% recycled building materials.

The new auditorium was designed with a high degree of flexibility to support the needs of both the music and drama faculty. Expanding on the original Gershwin Theatre, the centre now includes a custom orchestra shell that raises and lowers using an innovative garage-door type mechanism to avoid the labour-intensive setup associated with more traditional shells. It also features acoustic banners that can be deployed to change the room acoustics of the theatre, in order to accommodate everything from orchestra and choral performance to intimate drama performance and film screenings with projection and surround sound. The space also includes two automated stage lifts that can be used as additional seating, a thrust stage, or an orchestra pit. 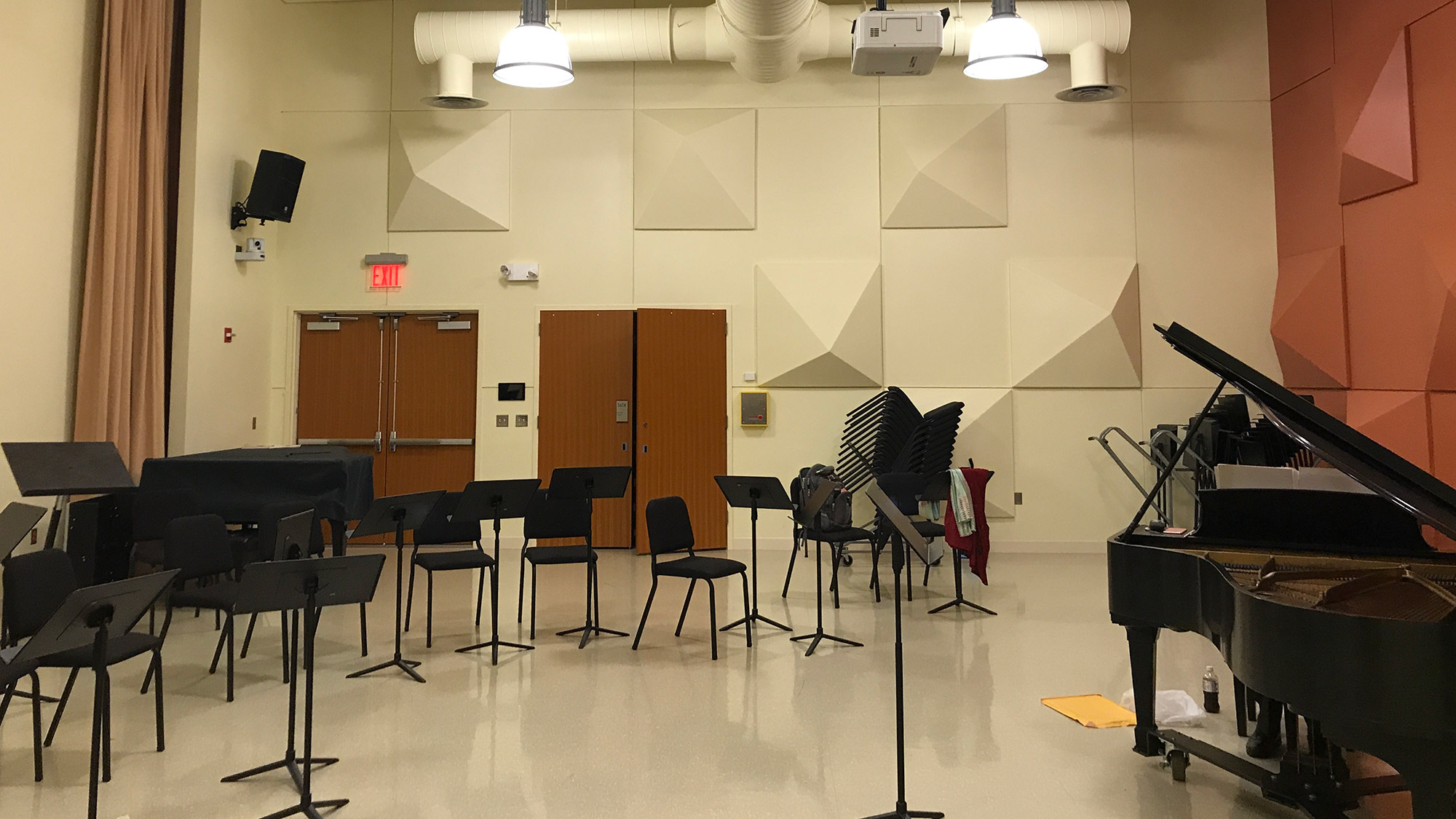 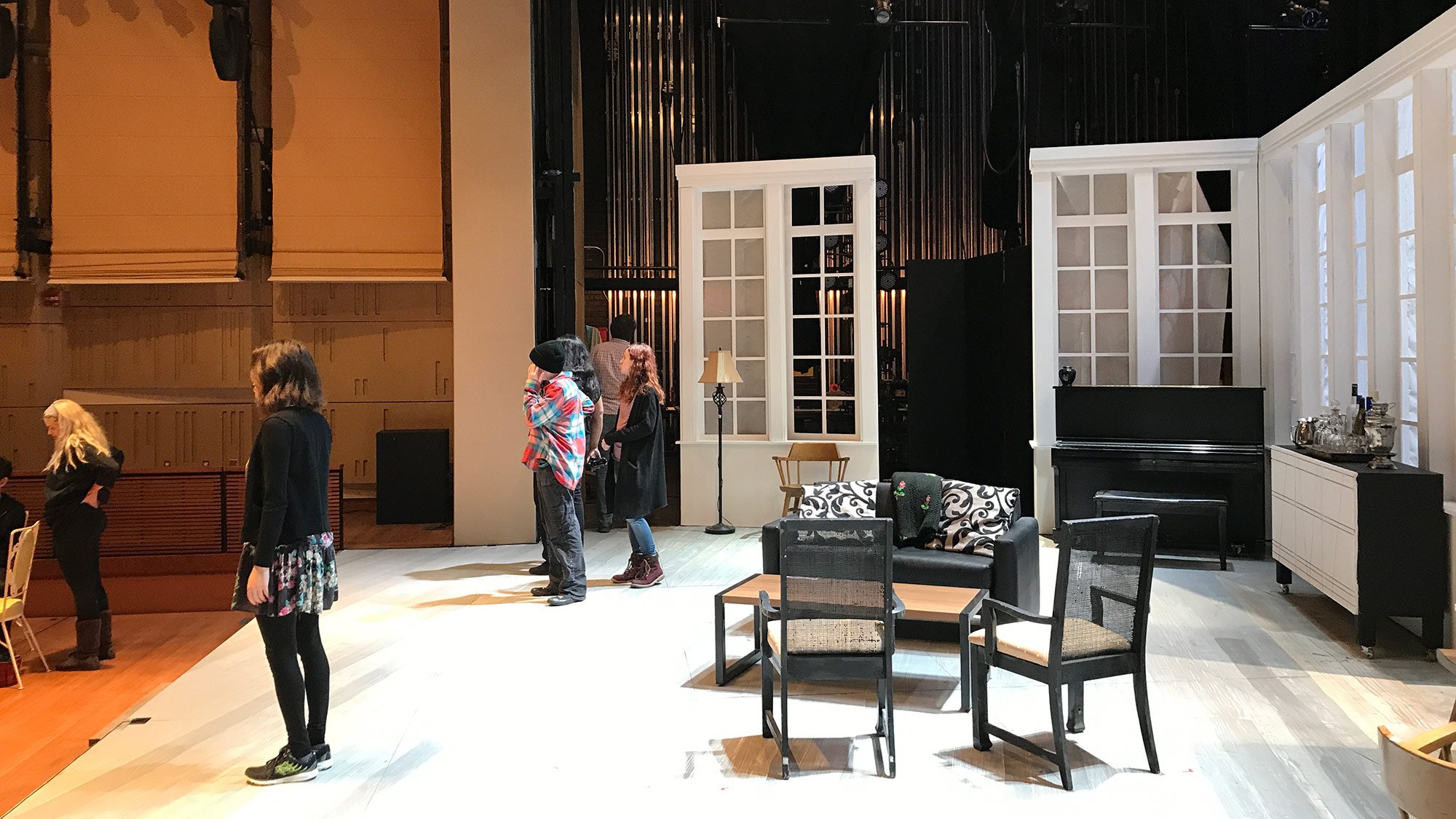 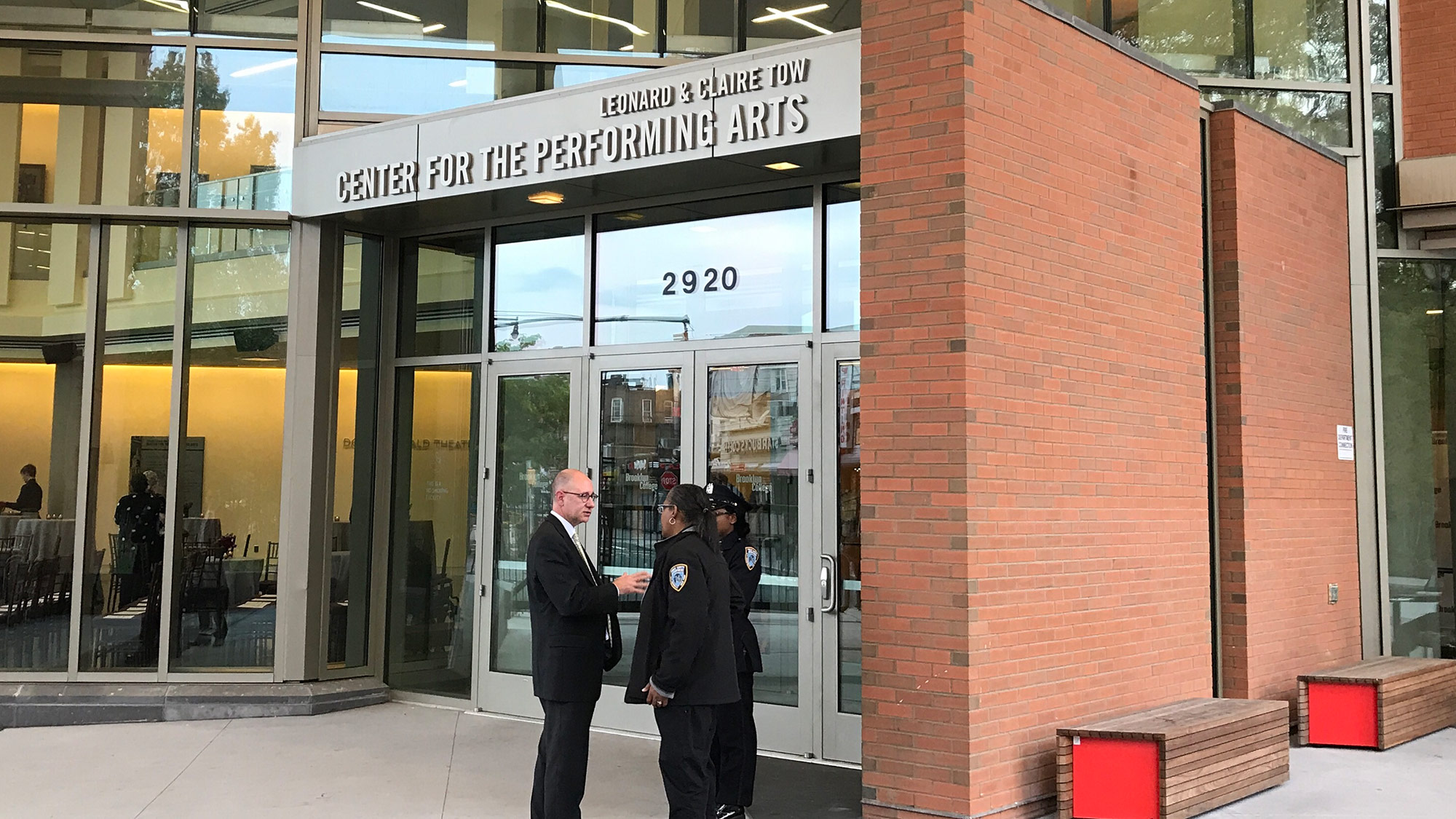 1 of 2
Arup’s acoustic and structural teams worked to design effective acoustic isolation for the instrumental and theatre rehearsal rooms, choral rehearsal room, and the many studio and practice rooms.

Arup’s acoustic and structural teams worked to design effective acoustic isolation for the instrumental and theatre rehearsal rooms, choral rehearsal room, and the many studio and practice rooms. They created box-in-box constructions that provide a high level of sound isolation that allow rehearsal, teaching, and performances to occur without interruption. 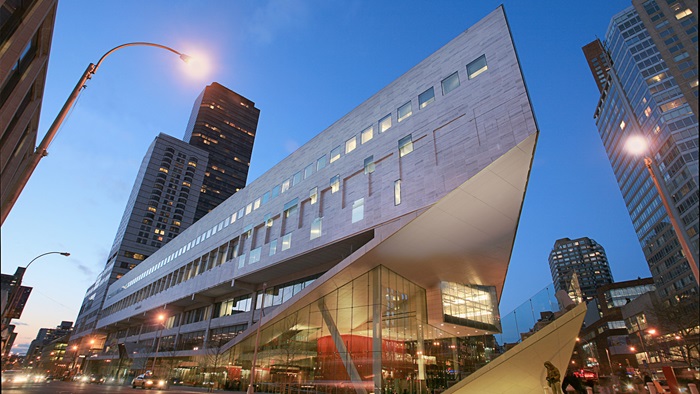 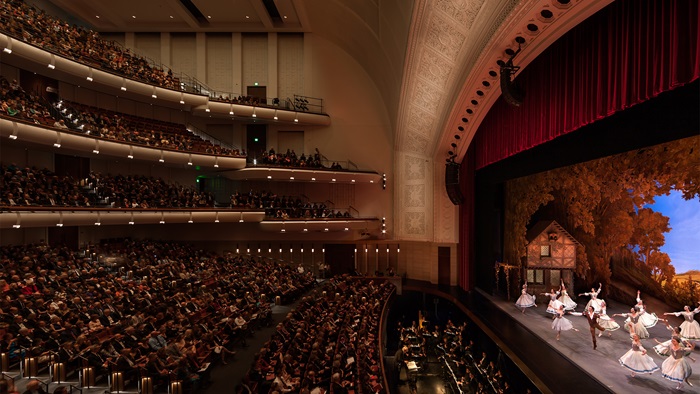 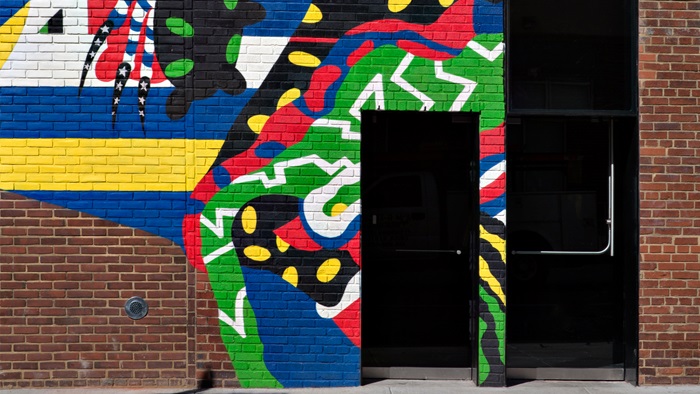