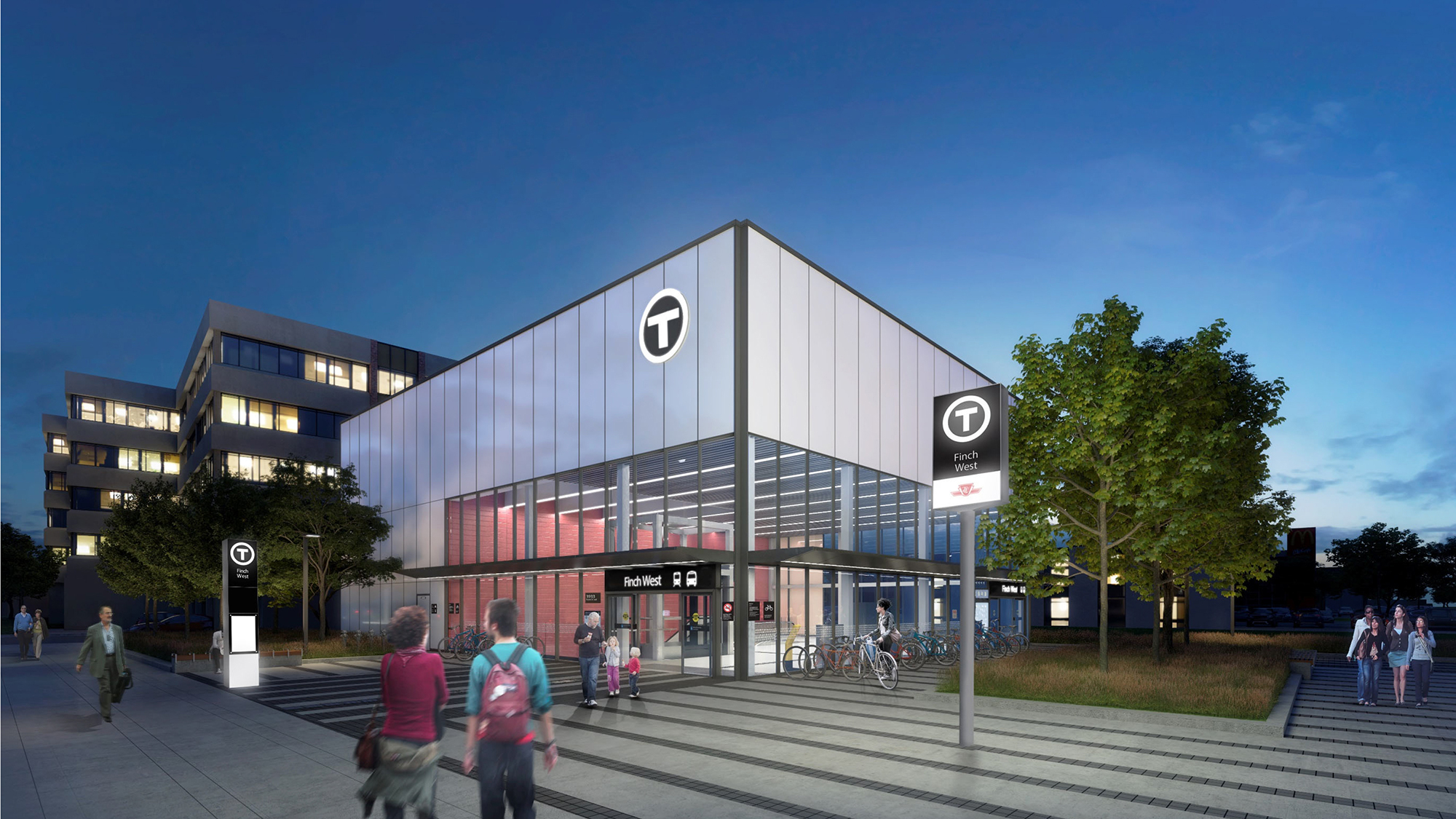 The $2.5bn Metrolinx project is being delivered in partnership with Infrastructure Ontario and Mosaic Transit Group (Mosaic), a joint venture between between ACS Infrastructure Canada Inc., Aecon Concessions and CRH Canada Group Inc. via a DBFM (Design, Build, Finance, and Maintain) delivery model. In addition to 16 at grade stops and two terminus stations—the largest of which, Finch West Station, provides a direct link to downtown Toronto—the project includes construction of a large-scale maintenance facility and eight traction power substations, as well as the replacement of the Highway 400 Bridge.

As Mosaic’s designer, Arup is leading the design and development of all permanent works. The firm’s scope includes optimization of the rail alignment, architectural and SMEP design of all stations and stops, integrated urban realm planning and bridge replacement. It also entails working with Mosaic and Metrolinx to identify solutions that meet the transit agency’s standard of excellence and enable the constructor to keep the project on time and within budget.

Slated for completion in 2023, the Finch West LRT line will significantly enhance connectivity throughout Northwest Toronto and improve access to the city centre. This massive public works project is a central pillar of the Metrolinx Regional Transit Plan and is expected to spur investment in several Northwest neighborhoods currently prioritized for redevelopment.

Arup’s station design team placed a strong emphasis on designing a transit amenity that supports the safety and comfort of users and adds lasting value in the public realm. 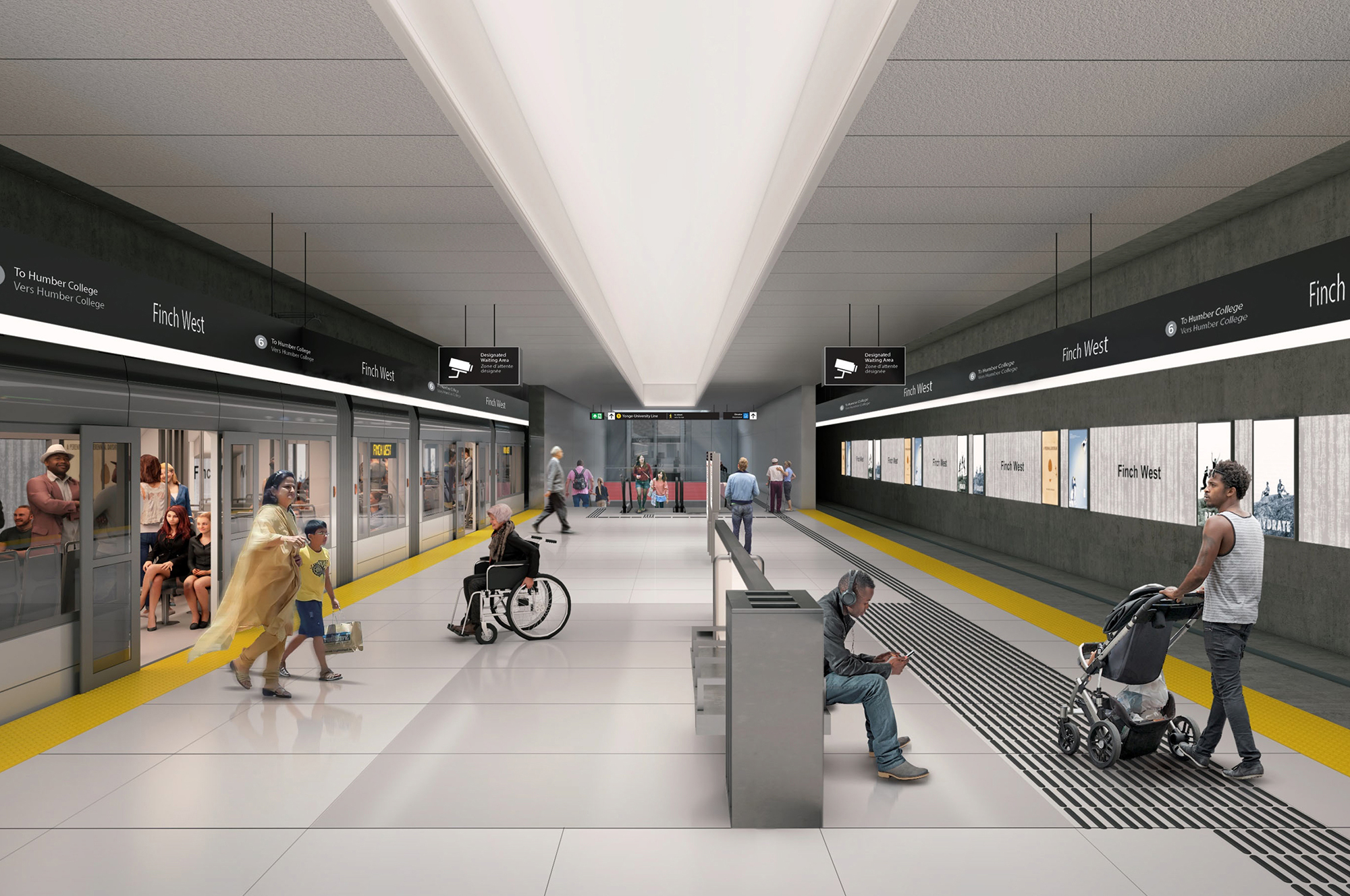 The design scheme for the Finch West LRT project prioritizes clean, simple lines and daylighting to create an experience of openness and security, an approach that supports both public safety and intuitive wayfinding. The line’s main station, Finch West, which serves as a gateway to Toronto’s larger transit network, effectively sets the overall tone for the traveler experience. It features a transparent façade, a series of skylights and an array of intrinsic architectural wayfinding features.

“We design stations for people. At Finch West Station, this means all aspects of the design—from the way individual spaces are curated and lit to the materials we use—work together to make people feel that they are in good hands. Our goal is that from the moment a person leaves the street and walks in the station, they feel guided where they need to go,” said Arup Design Excellence Lead Nille Juul-Sorensen.

This same clean and simple design language informs the design of all the stops and stations along the Finch West line, with various design elements from a shared “kit of parts” repeating intermittently from station to station. This modular approach allowed the design scheme to be easily adapted to meet individual site constraints while still creating a cohesive line-wide identity. The kit of parts was selected to achieve the team’s aesthetic vision and align with Metrolinx design standards. Emphasis was also placed on constructability and ease of maintenance.

When complete, the Finch West LRT’s design identity will be distinctive enough to be instantly recognizable to users, while also complementing the existing urban context and the other subway lines it intersects with.

Today, Toronto’s Finch Avenue West is a heavily trafficked, three-lane road flanked by narrow sidewalks that do little to support walkability or connectivity. Arup worked closely with Metrolinx and other project stakeholders to arrive at a comprehensive design approach that conforms to LRT best practices while also augmenting the existing urban landscape and bringing additional benefit to users.

Understanding existing urban conditions along the corridor was essential to successfully integrating the new service in a suburban context, according to Riski Lukka, who led Arup’s operational design and analysis team and was tasked with evaluating the project’s traffic impacts, pedestrian modelling and safety, as well as cycling infrastructure. “We put a lot of effort into understanding specific conditions along the corridor to optimize corridor operations for both Metrolinx and the user,” said Lukka. 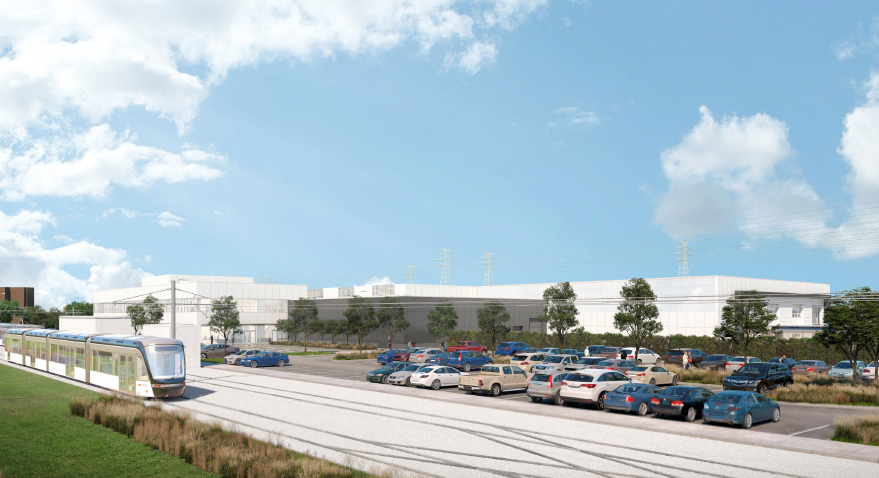 A simple way to streamline simulation

“We built a series of simulations of Finch West Boulevard to help us determine if the design met the client’s LRT performance targets and to optimize traffic patterns and pedestrian movements along the corridor. These are animated simulation models. If you’ve ever played SimCity, they’re very much like that.

A lot of complex data goes into creating these simulations. Say we want to model how the traffic and pedestrian flow at busy intersections changes when you add an LRT to the middle of the road. We have to consider an array of criteria ranging from how often the train arrives, to how traffic signals are timed and phased, to the number of cars at peak commute times.

To avoid the expense and labour involved in inputting all the data and configuration of information manually, we looked at ways to automate. We wrote a pattern recognition program that mimicked an engineer’s mouse movements on screen. This allowed us to import and update the simulation software automatically. This outside-the-box programming approach saved us hundreds of hours of time.”

The redesigned Finch Avenue West features sidewalks, which have been pulled back from the road to promote pedestrian comfort and safety and will also incorporate new multi-use paths.

“Our role as Mosaic’s designer has enabled us to take a truly holistic approach to this project,” said Arup Project Manager Simon Stephenson. “Because we’ve had a hand in everything from simulating traffic and pedestrian movements to designing the stations and the surrounding landscape and streetscape, we’ve been able to devise highly integrated solutions that come together to create a cohesive experience for users.”

This high level of integration was made possible by Mosaic’s willingness to co-locate their staff at Arup’s Toronto office for the duration of the design process. “On a project this complex, issues are bound to crop up,” said Stephenson. “We made a deliberate decision to work face-to-face with Mosaic, with close links to Metrolinx throughout the design process to help ensure that all the key stakeholders were actively involved in the day-to-day decision-making.

This collaborative approach allowed us to flag potential problems early on and quickly determine a mutually agreed upon approach to mitigation.” To further streamline the design process, each project task, from station design to municipal coordination is assigned to a designated team comprised of Arup staff and subcontractors, and representatives from Mosaic. The integrated teams meet on a weekly basis with Metrolinx decision makers to tackle any challenges that arise.

The replacement of a heavily trafficked bridge is typically a lengthy and disruptive process that necessitates ongoing lane closures over a period of months or years. To reduce overall impacts to the public, Arup’s bridge replacement team recommended a more expedient approach to the Highway 400 Bridge replacement. This innovative bridge construction method involves building the two replacement spans in “staging yards” located alongside the existing bridge. Once the new spans are finished, the bridge will be closed to traffic for just two weekends, allowing the existing spans to be demolished and the new decks to be installed. The Highway 400 Bridge replacement is slated for completion in late Spring 2020. 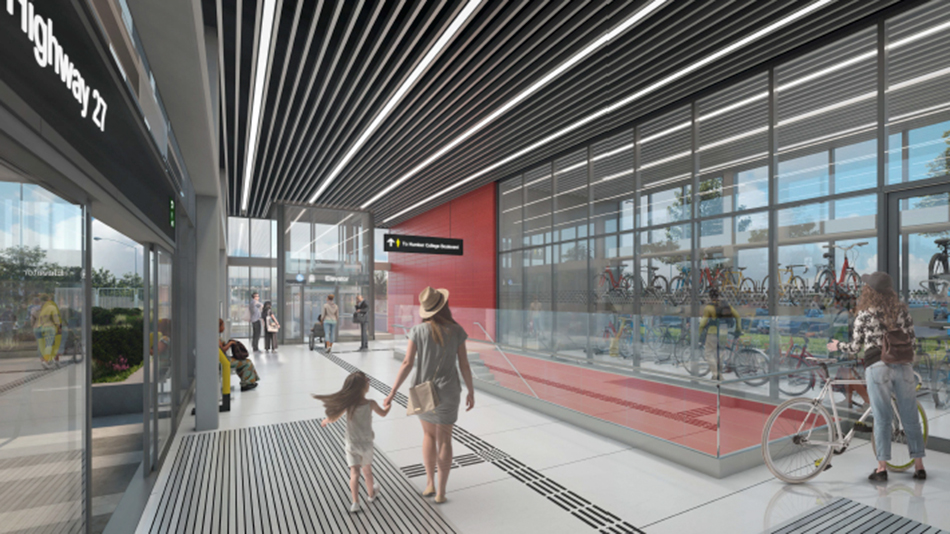 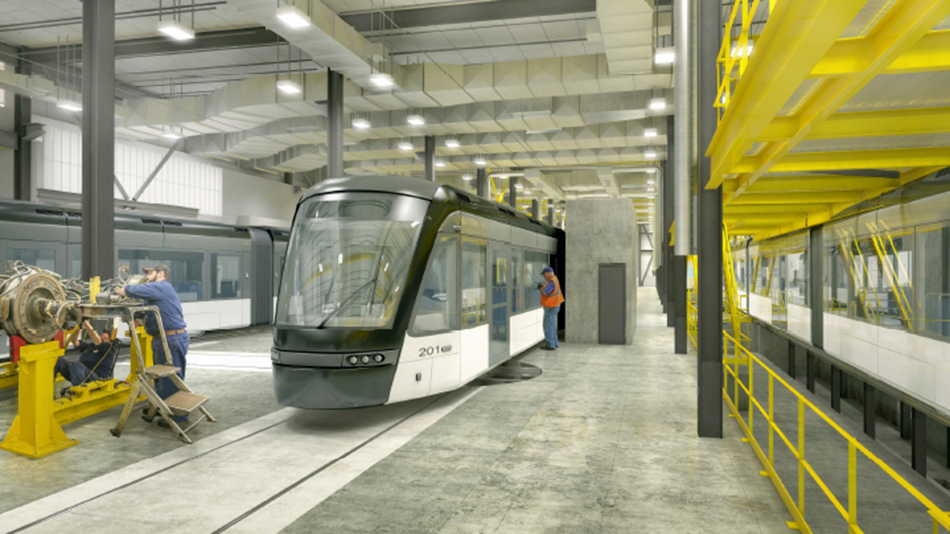 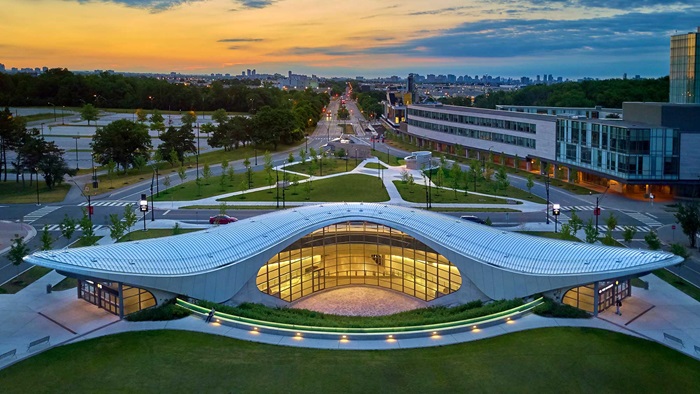 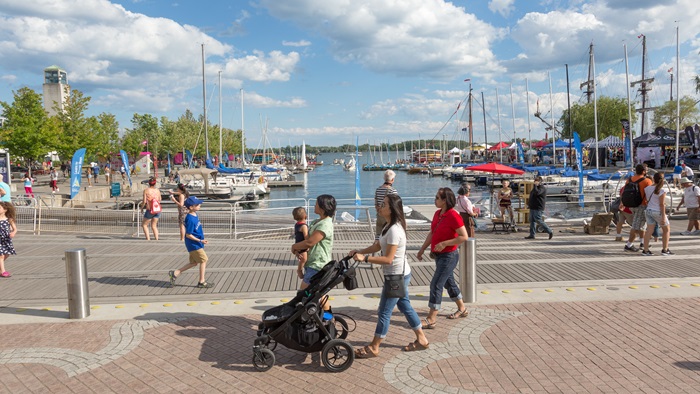 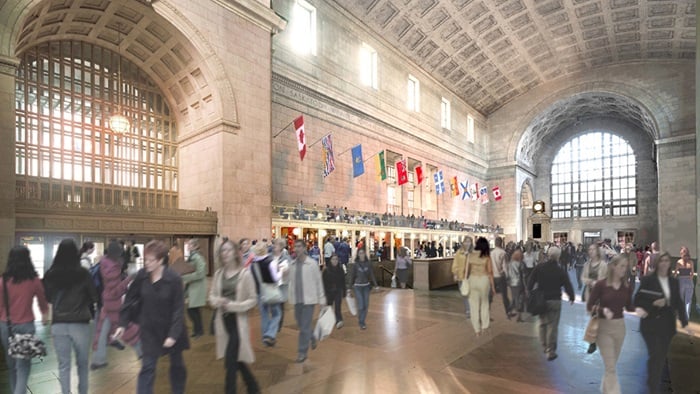