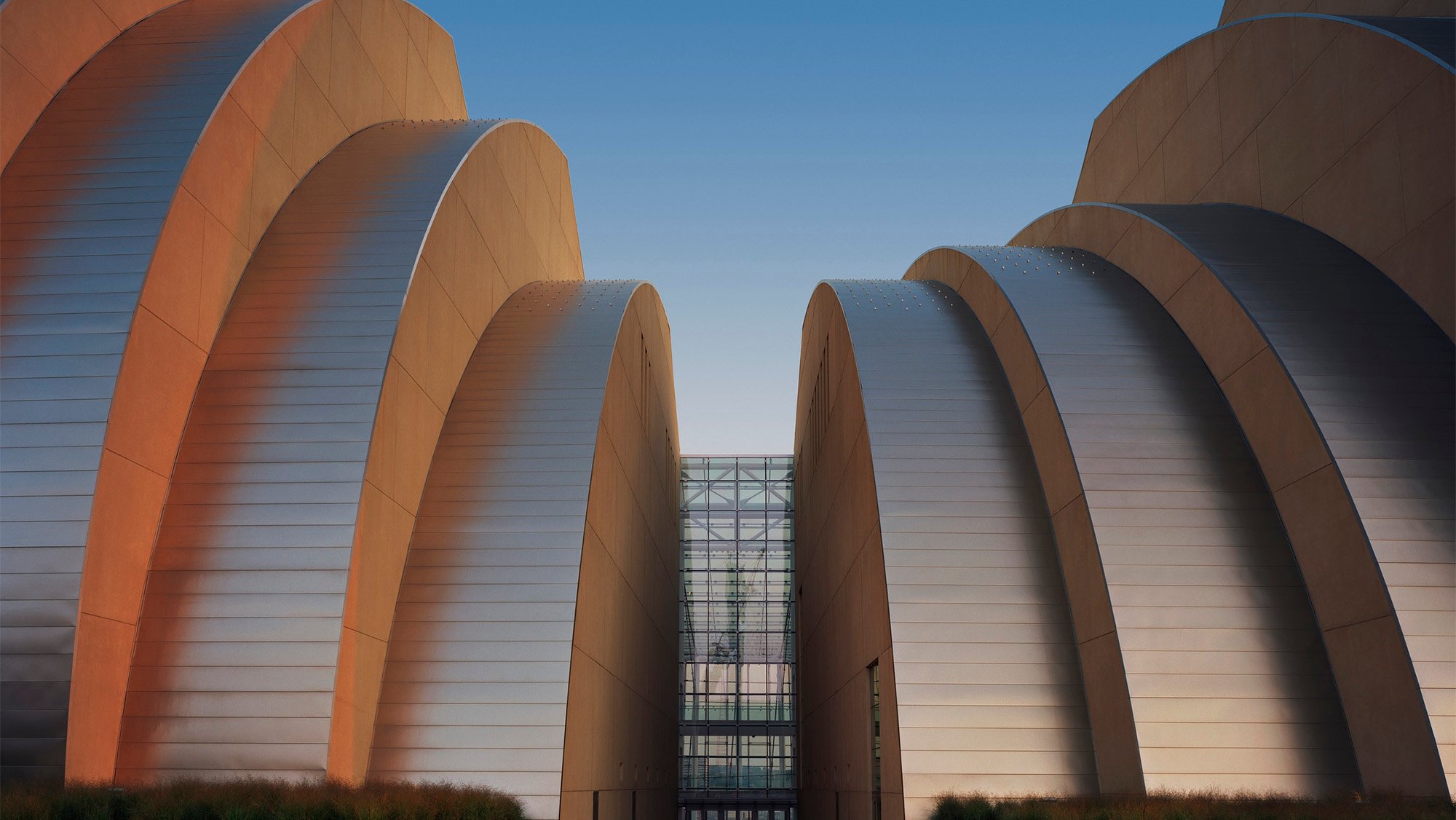 Kauffman Center for the Performing Arts

Involved since the conception of the project, Arup’s multidisciplinary team worked to translate the architect’s ambitious vision into reality. We developed a number of customized engineering solutions which enabled us to realize a complex form for the outside of the building while providing an optimal acoustical environment inside the performance halls.

Three buildings in one

The Kauffman Center is actually three separate buildings, consisting of two performing halls with a larger structure covering both.

With this “box-in-box” formation, the outer shell roof serves as a sound barrier, preventing vibration and noise from the surrounding city from leaking into the performing spaces. Dense concrete walls provide the acoustical mass essential for optimal sound quality.

The glass roof provides a circulation link between the two halls. Arup’s structural engineers designed it to be free of expansion joints that would have compromised the space’s transparent aesthetic.

Architect Moshe Safdie’s initial sketches called for a spacious glass-enclosed atrium connecting the two main performance halls to one another and the city beyond. To support the need for transparency, Arup’s structural engineers designed a cable-supported glass roof, enabling a column-free space.

We used nonlinear analysis and form-finding to balance the effects of gravity, wind, snow and other conditions and determine the most structurally efficient shape for the cabling. Splaying the external rods out from the center rather than running them straight out from the building provided structural stability (similar in principle to a backyard volleyball net stabilized by cables that extend outward on both sides). This provided a significant aesthetic benefit, as it allowed us to eliminate cross-bracing on the curtain wall. 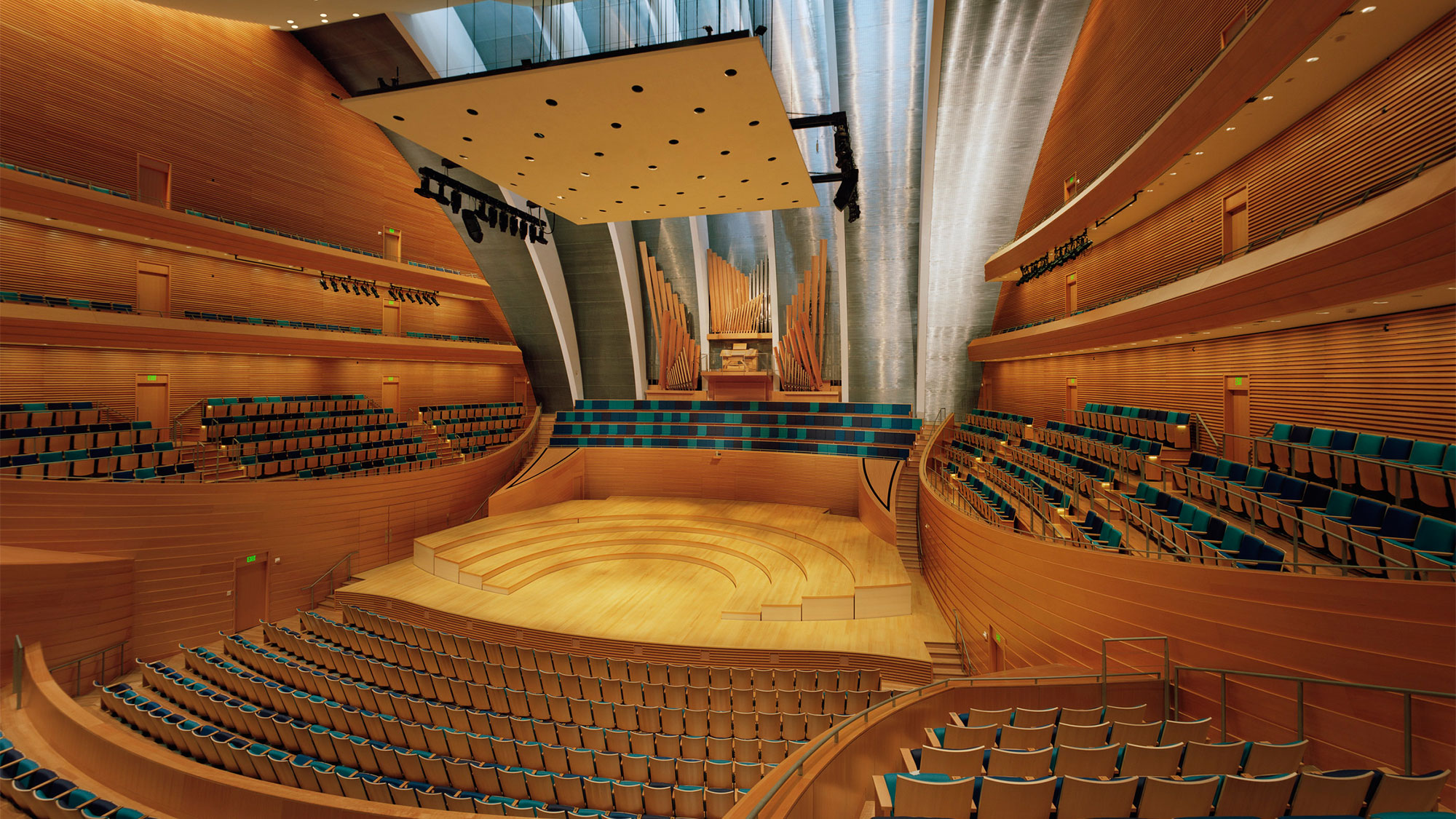 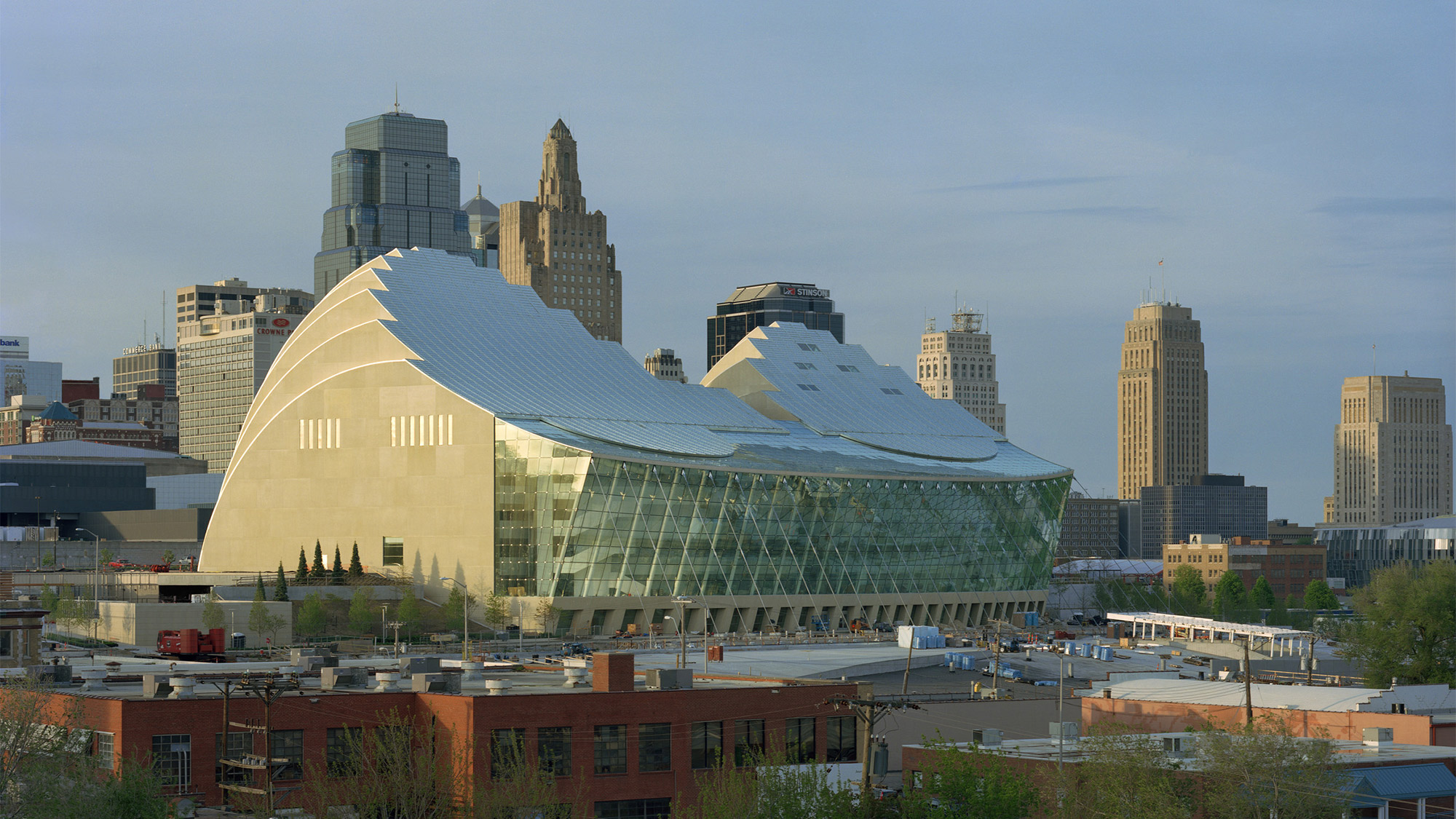 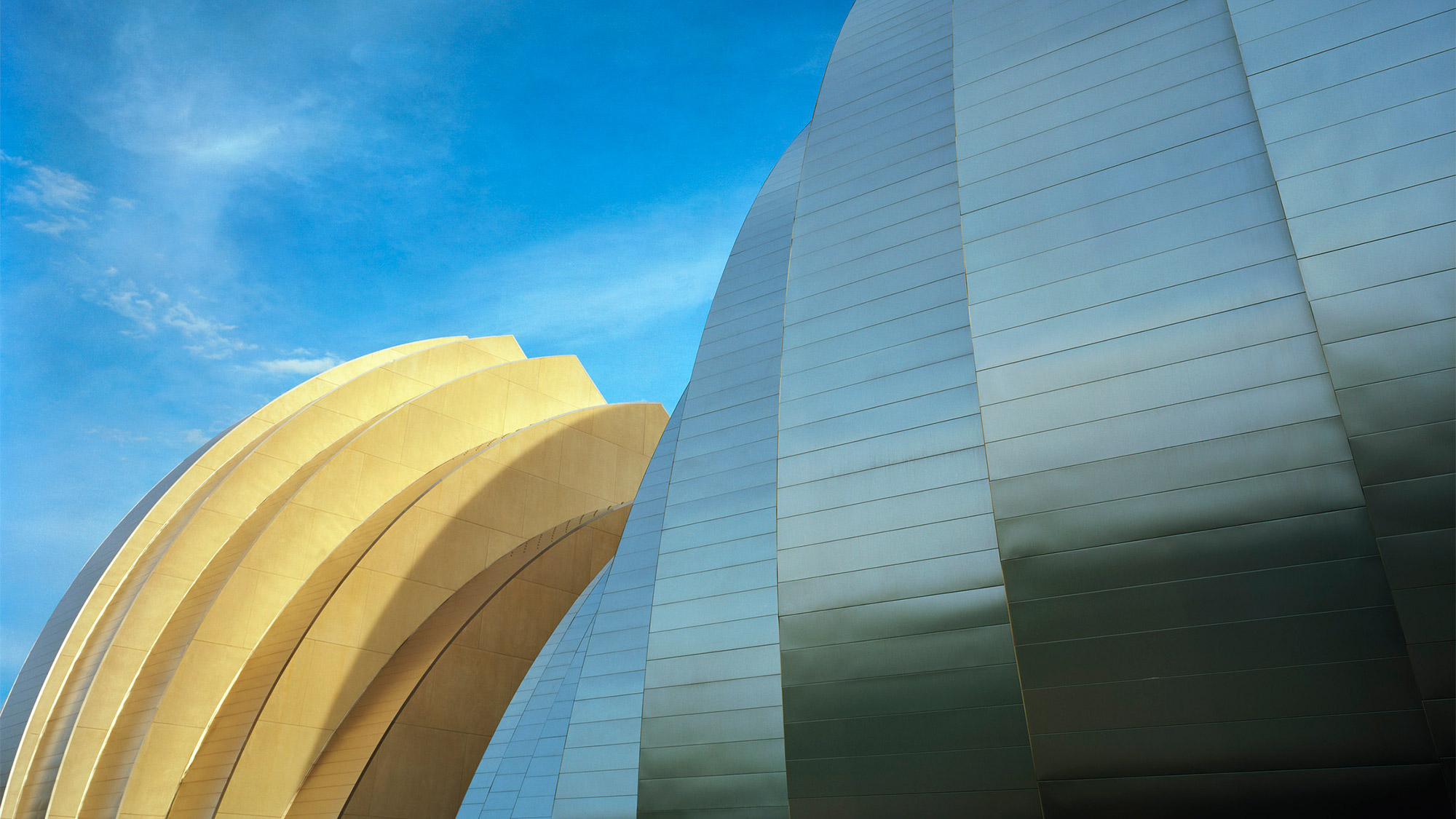 1 of 2
Creative engineering made possible the creation of both highly visible features (e.g., the long-span cable-supported glass roof) and more subtle elements (e.g., as the lack of fire doors marring the glass facade).

Structural roof cables or rods extending down to the lobby floor or the ground outside would typically require fire protection. Commonly available solutions are expensive and bulky. When shown a sample, Moshe Safdie immediately turned to Arup Principal Daniel Brodkin and delivered his verdict: “Make these go away!”

Our fire and structural engineers worked closely together to achieve this goal. The teams jointly developed digital models demonstrating that using high-strength rods instead of cables on the exterior of the building would allow for the elimination of fireproofing.

The result: a clean, sleek structural system whose functional parts – such as the striking boomerang plates that connect the cables near the roof line – contribute to the elegance of the architectural design.

Our solution was to prevent downdrafts by blowing warm air up the wall when necessary. We mitigated condensation by incorporating outside dry air to prevent moisture accumulation.

In the hall interiors, we controlled occupant comfort and noise economically and sustainably by supplying low-velocity air beneath the seats and using occupant heat load to draw cool air upwards, avoiding drafts.

The internal halls consist of cast-in-place concrete, while the exterior shell and support spaces were framed in steel and then clad in stainless steel and precast concrete.

This split in material use offered several advantages. First, it cut months off of the construction time, which saved the client money. While steel requires a great deal of upfront work – detailed design, approval and fabrication – it allows for fast construction, whereas concrete follows the opposite pattern. By using the two materials for separate parts of the design, the contractor was able to start the concrete structures while the steel design was being finalized, then erect the steel structure relatively quickly as soon as it was ready.

In addition, concrete and steel provided substantial advantages for their respective areas of use. Concrete is more amenable to the small-scale geometry of concert halls and less prone to vibration, while steel is better at resolving tension, and therefore a better choice to support the cable net system.

The complex toroid-shaped roof was generated from simple components. We constructed the form using primary steel bent to circular arcs with straight transverse steel members spanning between them.

For the two main performance halls, we tailored our structural solutions to respond to different configurations of cantilevered seating. The narrow plan of the concert hall lent itself to a colonnade-based design, while the proscenium theater’s tiered box seating was better suited to radial walls. 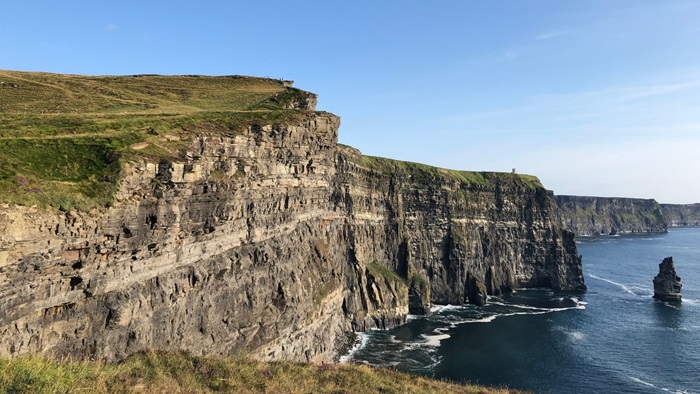 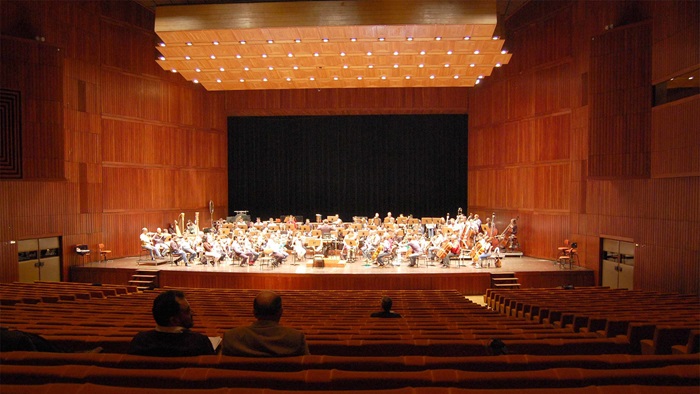 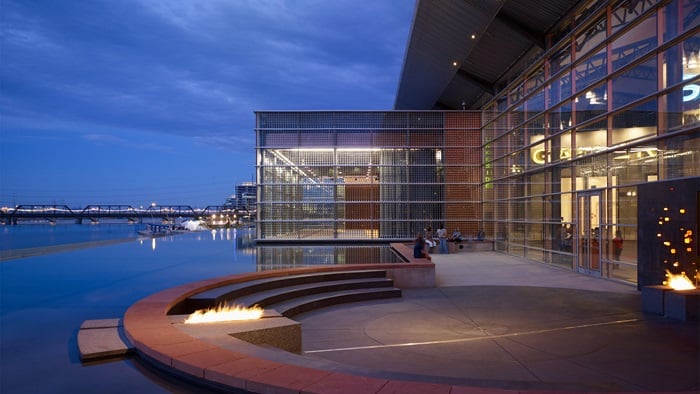 Tempe Center for the Arts