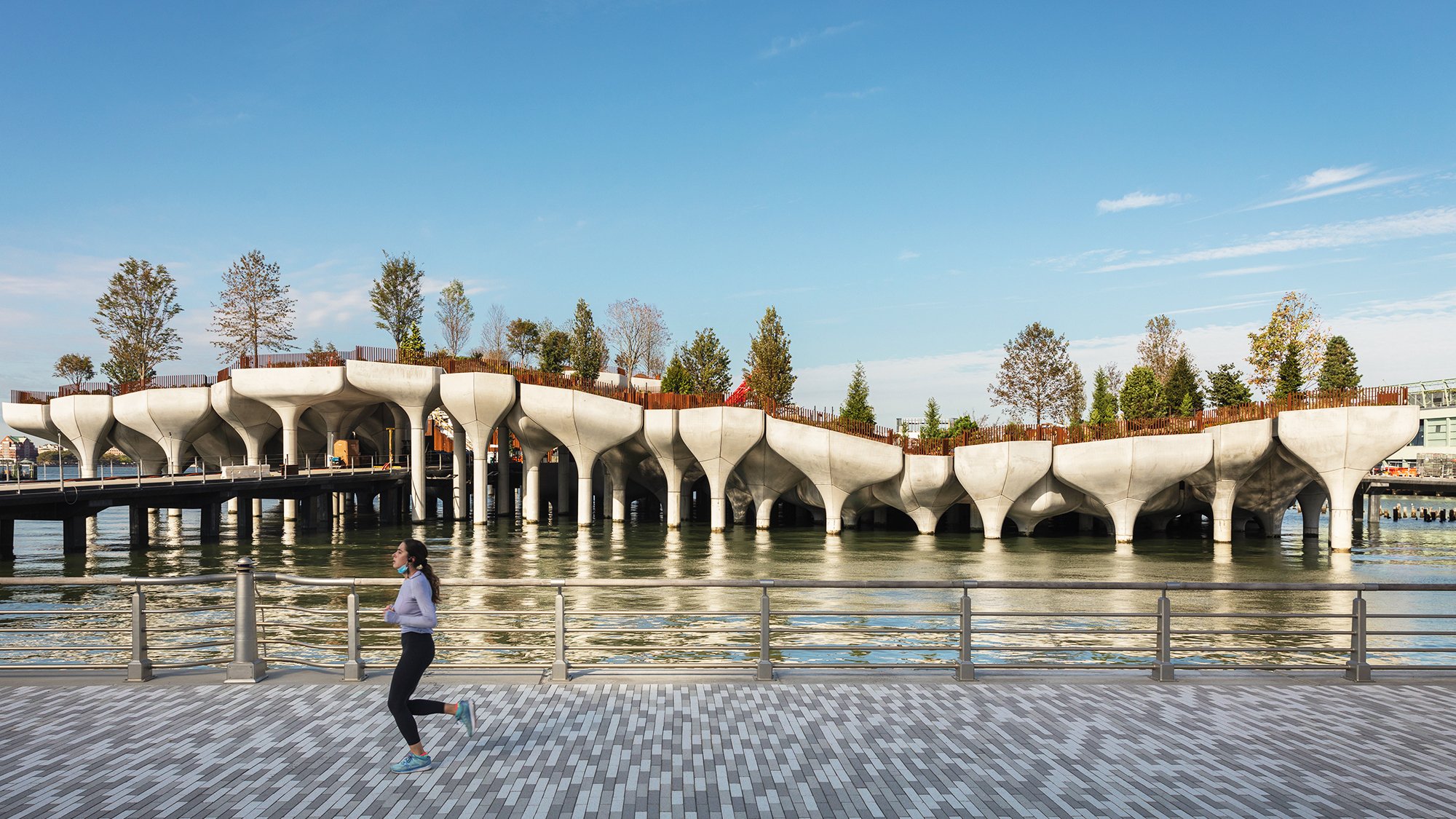 Designed by the London-based Heatherwick Studio and the New York-based landscape architecture firm MNLA, Little Island is a 2.4-acre urban oasis. New Yorkers can enjoy the outdoors and take in a range of performances, including theatre, music, and dance, as well as community events, with the Hudson River as a backdrop and surrounded by 35 species of trees, 65 species of shrubs, and 290 varieties of grasses, vines, and perennials. Arup has been involved in the project since its inception, providing a suite of services that spans structural, civil, mechanical, electrical and public health engineering, acoustics, audio-visual and theatre consulting, daylight planning, IT and communications consulting, and fire/life safety consulting.

Arup’s integrated team has helped shape this iconic park, contributing solutions for everything from green infrastructure to venue planning and infrastructure design. The most notable aspect of our work is the benchmark structural approach Arup’s engineers devised for the project, which harnesses advanced 3D design and prefabrication techniques to achieve the project’s unique aesthetic requirements while also optimizing constructability.

The original design concept pictured a park “floating” above the Hudson River, propped up by a complex array of piles of differing heights, all of which fused together at the top to create the park’s undulating topography. When it came time to translate this vision into a constructible design, Arup’s engineers, working alongside Heatherwick Studio, quickly determined that precast concrete was the best choice for the pots that form the park’s base, due to the challenges of constructing cast-in-place concrete over a river and the expense entailed in steel construction.

The decision to use precast concrete for the pots was complicated by the fact that the design contained few repeating patterns—normally a prerequisite for a prefabricated system. In addition, each of the concrete pots was large enough that there were concerns that they would be prohibitively expensive to fabricate and ship to the site.  The structural team’s expertise in parametric modeling, digital fabrication and modular construction surmounted these barriers.

Embracing advanced modeling, Arup’s structural team, together with Heatherwick Studio, were able to devise “a Cairo pentagon” pattern that rationalizes the structure’s geometry and allows for invisible repetitions in form. “We used more than a dozen different varieties of this basic pentagon. These are arranged around the perimeter in a repeating pattern along different slopes and in different directions so that they look distinctly different, but on the plan, all but a handful of the pots are the same,” says Arup project director David Farnsworth.

To ensure that prefabrication went smoothly, the Arup team used the Heatherwick Studio pot geometry as the basis to produced the shop drawings in-house providing extraordinarily detailed specifications for the offsite fabricator. By breaking each pot into discrete pieces and coming up with an efficient connection concept, the team also ensured that the pots could be shipped more economically and assembled on site with relative ease. 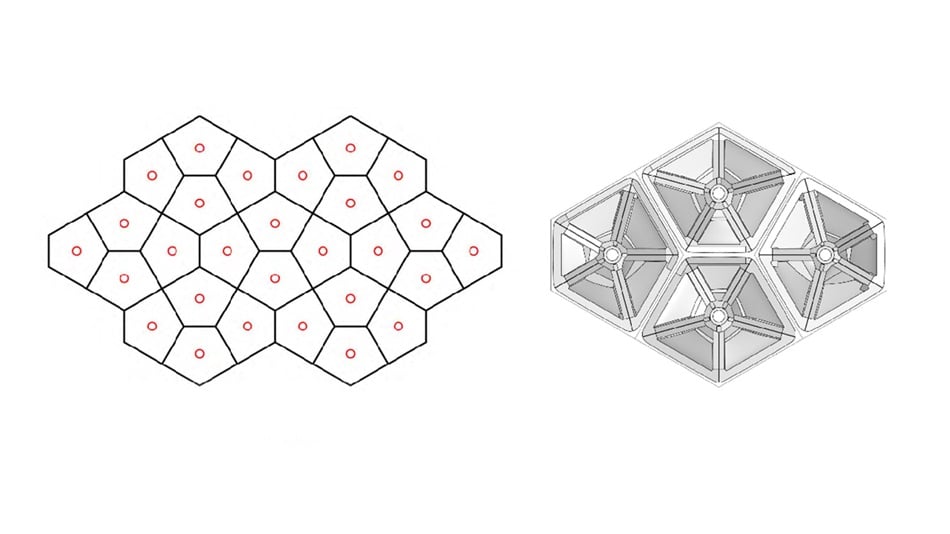 Embracing advanced modeling, Arup’s structural team, together with Heatherwick Studio, were able to devise “a Cairo pentagon” pattern that rationalizes the structure’s geometry and allows for invisible repetitions in form

Arup partnered with the Client’s artistic advisor team to help define their artistic goals park-wide and for each of the three performance venues, which included using the Arup SoundLab to simulate and optimize the predicted soundscape experience. Arup worked with the landscape architects MNLA to integrate the needs for audience sightlines into the landscaped contours, and embedded into the park surface a hidden and flexible infrastructure to support a wide range of events, shows and concerts, ranging from large-scale music performances to park-wide multimedia art installations. The end result is a space that can fully support amazing performance experiences without detracting from the park’s overall look and feel. 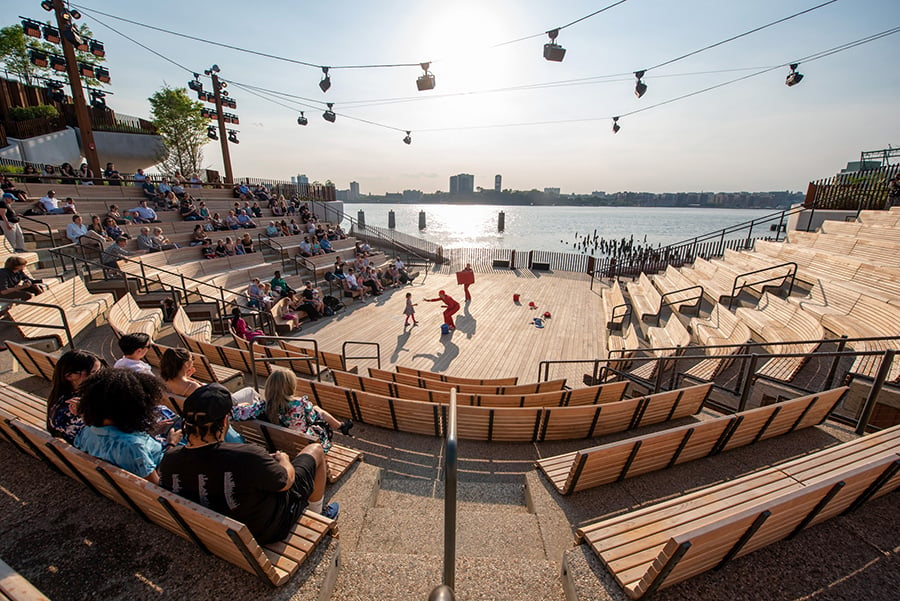 Little Island is part park, part performance venue. We partnered with the Client’s artistic advisor team to help define their artistic goals park-wide and for each of the three performance venues, which included using the Arup SoundLab to simulate and optimize the predicted soundscape experience.

Arup’s civil engineers worked closely with MNLA and Arup’s structural team to develop an integrated stormwater management scheme that transforms Little Island into what lead civil engineer Vincent Lee describes as “one giant green roof.” Thanks to a network of green infrastructure elements artfully integrated into the park’s landscaping and plazas, virtually the entire park is a sponge for stormwater. As soon as stormwater runoff is captured by one of these surface features, it begins to filter down through the pier structure’s substrata, which is designed to treat the water before gradually releasing it back into the Hudson River. 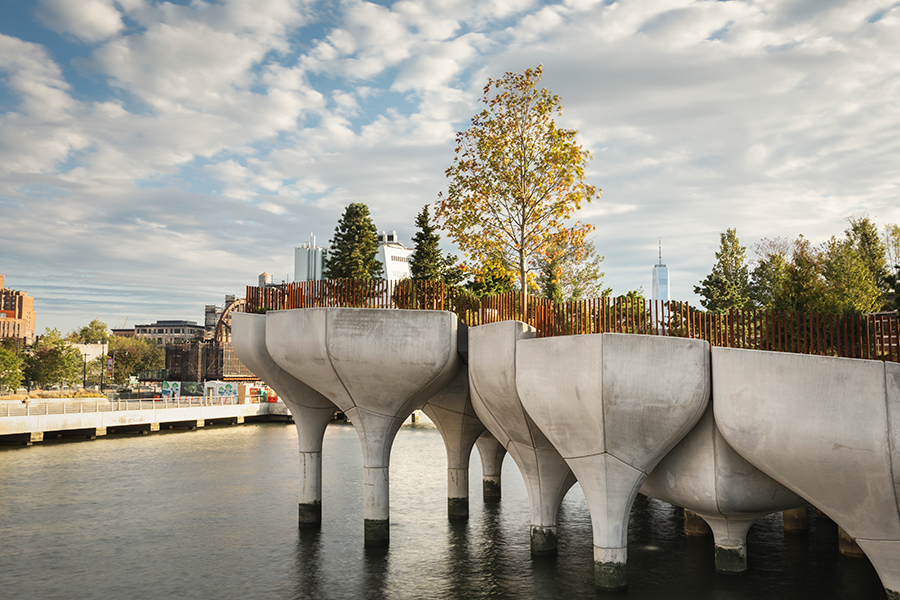 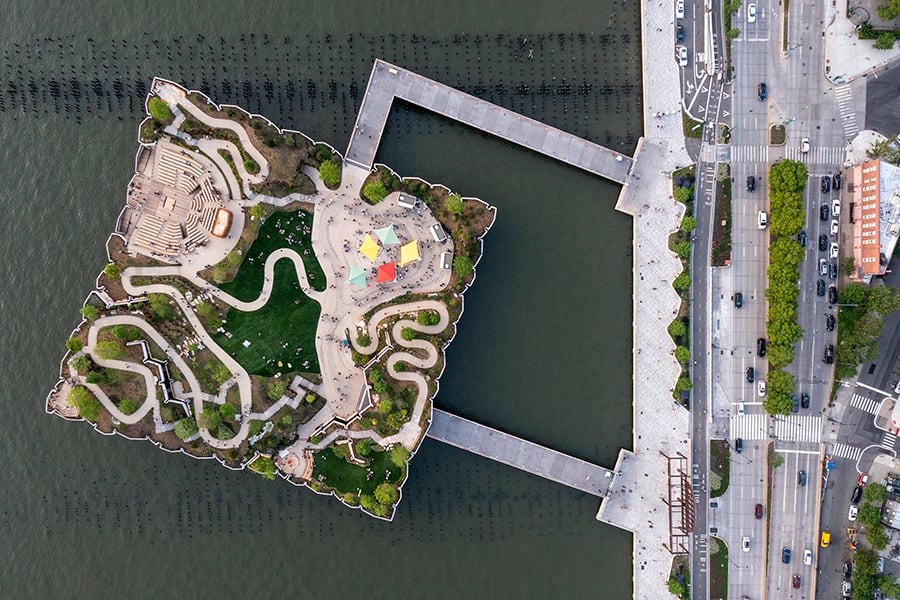 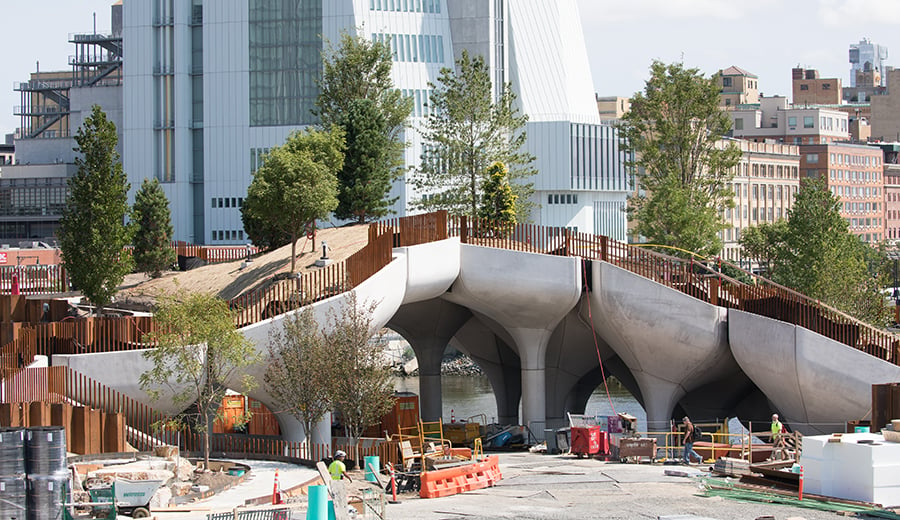 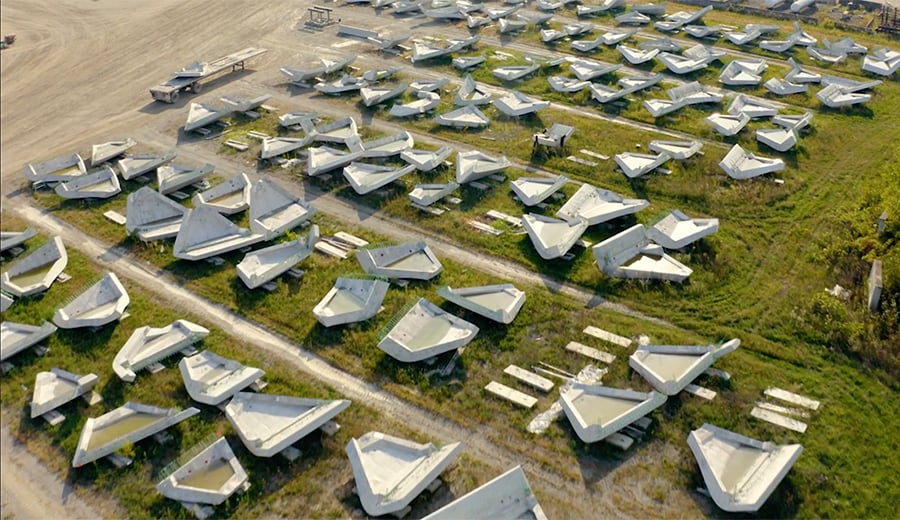 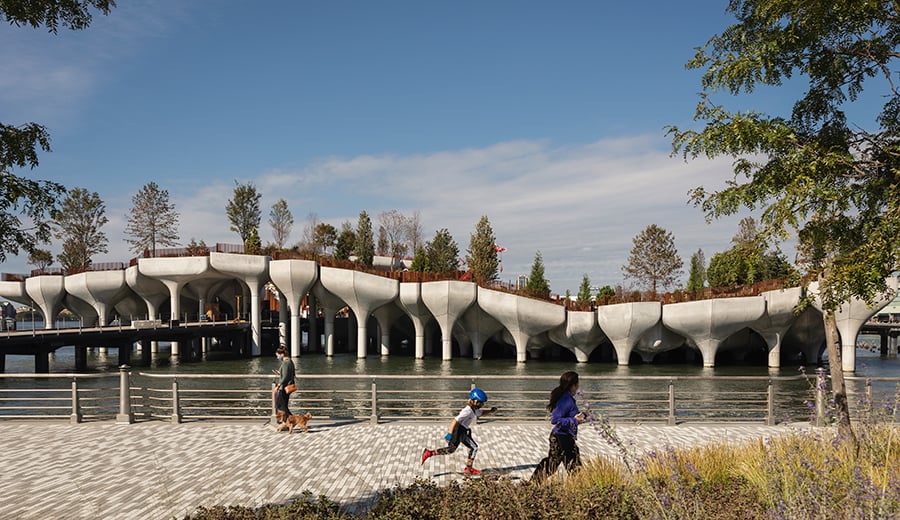 1 of 2
Little Island is a 2.4-acre urban oasis in New York City.
Publications

Learn more about our work on Little Island, the timber-engineered Ainsworth Building in Melbourne, Istanbul’s Başakşehir Pine and Sakura City Hospital and the Maruhon MakiArt Terrace. 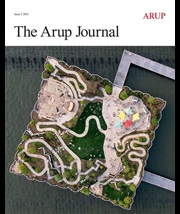 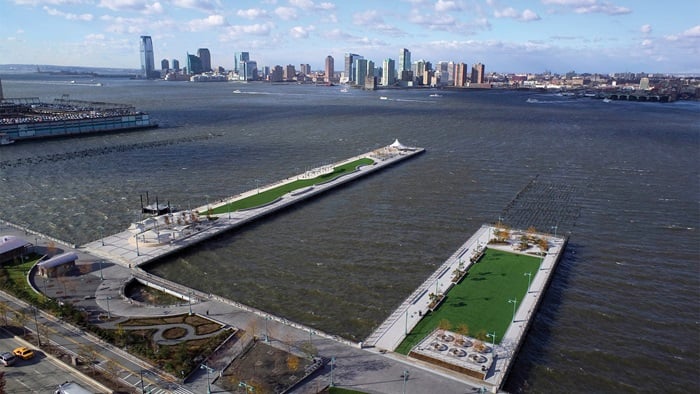 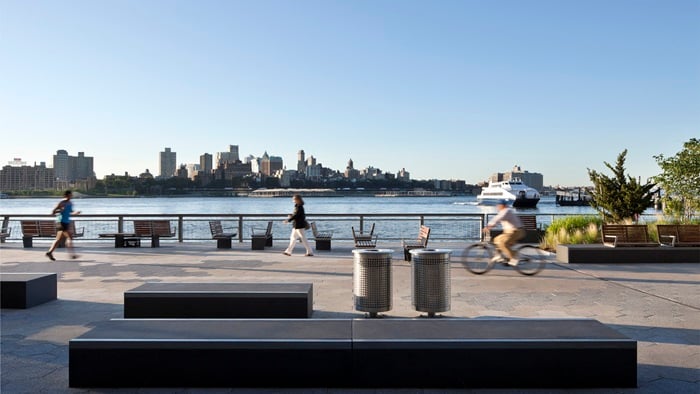