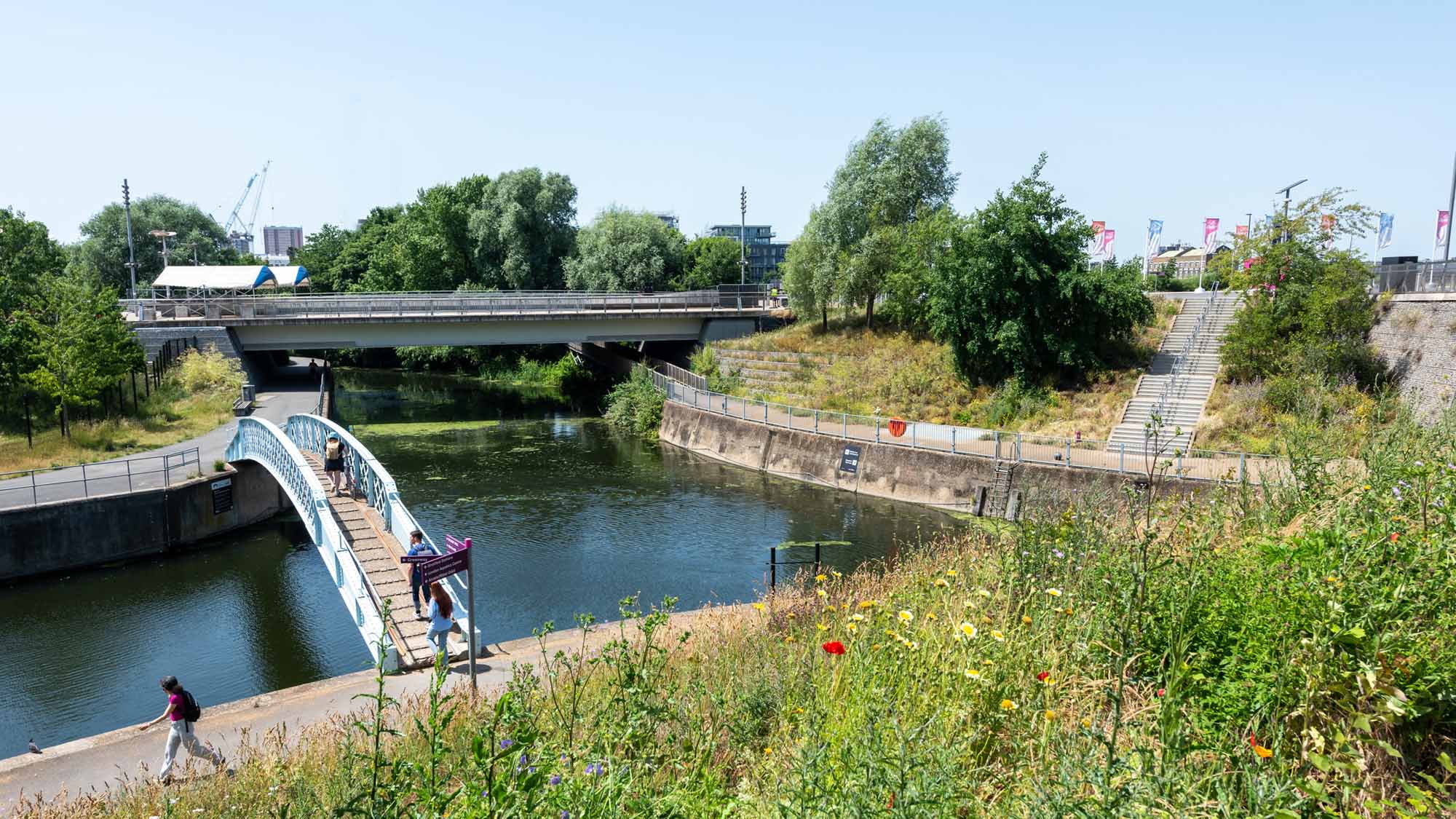 How was one of London’s largest brownfield sites transformed to stage the Olympic Games? 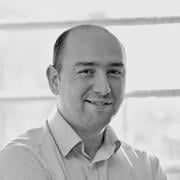 Working closely with the Olympic Delivery Authority’s consultants, planners and contractors, Arup led the landscape design for the South Park – part of the Queen Elizabeth Olympic Park – to bring it to life in time for the London 2012 Olympics. Against the clock, our multidisciplinary team helped to transform a 2.5km² brownfield site into a stage fit for the Olympics, while creating a resilient and sustainable public space for everyone to enjoy.

We significantly reduced the park’s embodied carbon by using recycled soil from the Olympic soil hospital. Large volumes of site material were remediated and reused to construct the site’s new infrastructure – while keeping pace with the project’s challenging timescales. 8.5km of riverside were transformed using various approaches to create tranquil, sustainable waterways, which proved to be must-see destinations for visitors during the Olympic Games.

To minimise embodied carbon, over 90% of demolition material was ultimately reused in the park’s landscape works, with a significant amount being recycled to construct the park’s retaining walls and bridge abutments. To assure quality, all materials used were sampled and tested prior to final design and specification.

£2msaving in the subterranean utility network

Paving the way for sustainable development

Our team’s approach to paving was equally sustainable. This involved taking square metre slices of different pavement options – including top surface, supporting layers, and drainage – and evaluating these against set criteria, such as embodied impact, potential recycled content, and cost. This meant that only the most resilient, low-carbon, and cost-effective paving was chosen.

This paving strategy was complemented by the selection of non-PVC pipes for the park’s drainage system, which cut embodied carbon by 16.5kg per pipe. In addition, over 900 tonnes of waste pulverised fuel ash (PFA) were used to reduce the embodied carbon of the park’s concrete elements.

Even the park’s small details – such as its benches, posts, and edgings – were included in our sustainable development plan. By only using FSC sustainable timber for these features, we were able to achieve marginal sustainability gains that compounded to make a considerable impact. 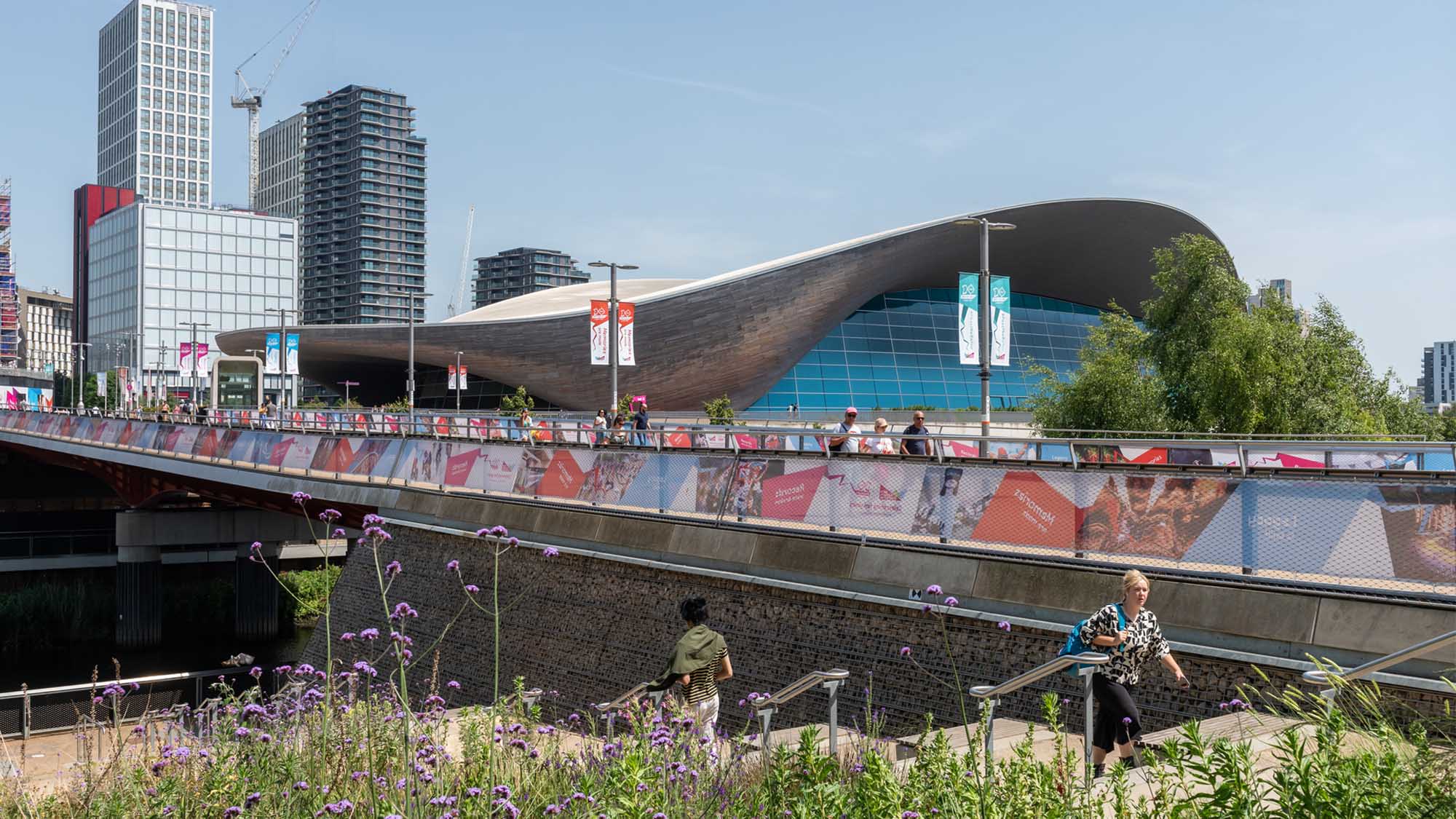 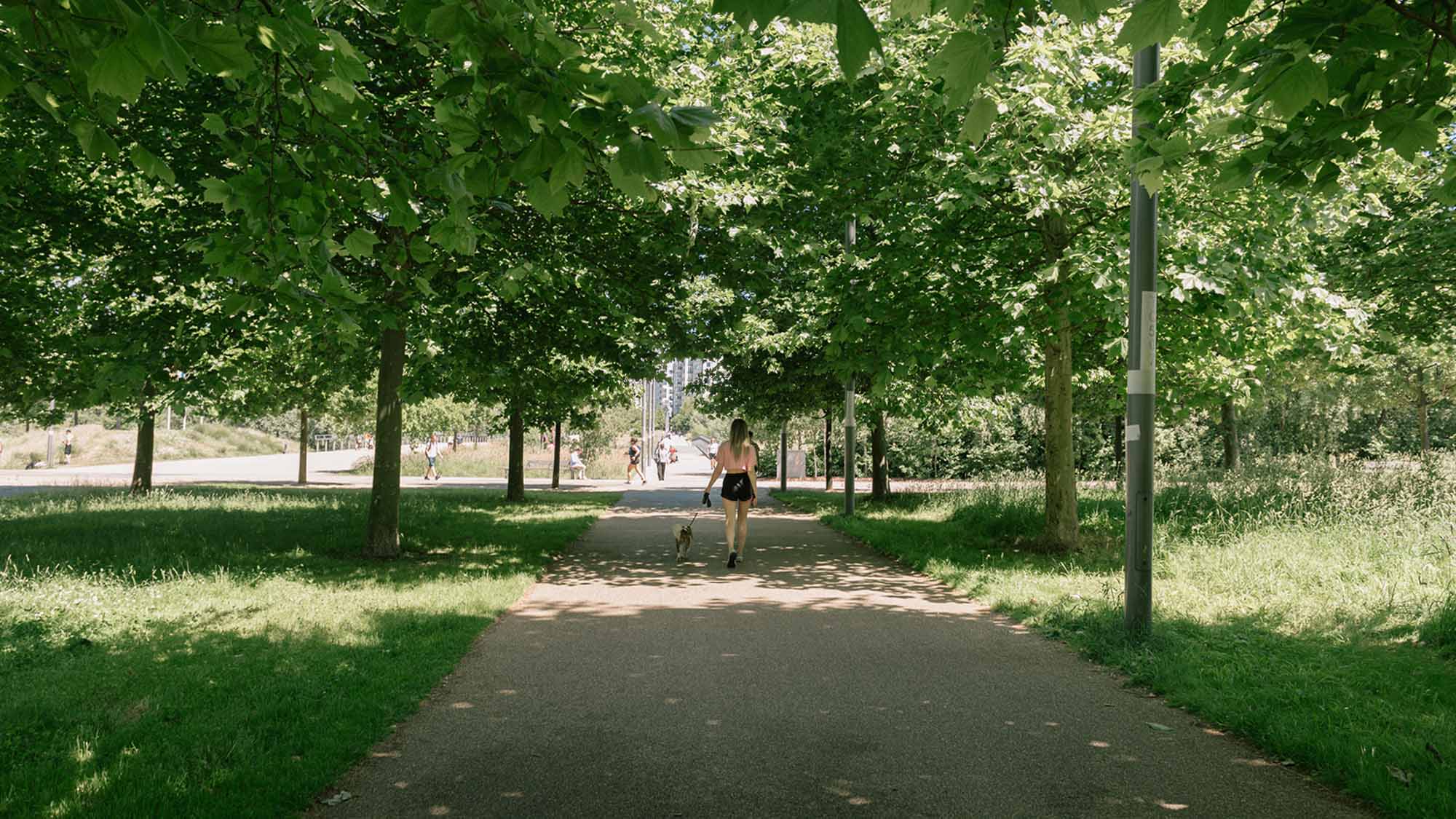 1 of 2 Our multidisciplinary team helped to transform a 2.5km² brownfield site into a stage fit for the Olympics.

Designing for sustainabilty under the surface

A significant part of the park’s carbon reductions resulted from the sustainable methods used to create its 20km subterranean utility network, which included a green and cost-effective drainage solution. We chose an unusually deep sewer design for the primary foul sewer, relying on gravity to move water across the park in select areas. This removed a total of two pumping stations from the park’s original plans. As pumping stations are expensive and highly energy intensive, this saved £2 million, cut operating costs, and reduced emissions.

Designing for seamless integration proved to be one of the project’s recurring challenges. When designing the park’s subterranean systems, all new infrastructure needed to align with the utility companies’ existing networks and regulations. For example, the sewer’s deep design was only made possible by our team’s negotiations with Thames Water, through which we agreed on a restricted discharge by gravity to its network.

Recognising this, our team designed a large chamber that dissipated water energy and discharged it gradually into the River Lea – in line with British Waterway’s requirements. We also carefully positioned the structure below the river’s waterline, ensuring that the river’s natural beauty was not spoiled by unsightly pipelines and concrete structures. 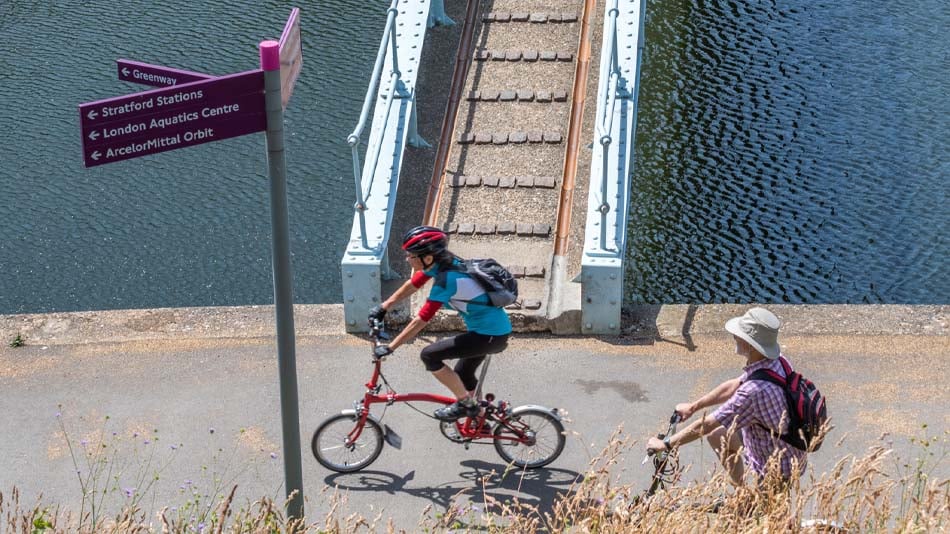 The level changes and access to the river edges were carefully designed to be accessible for all.

Beyond the Olympic Games

Our work not only focused on the Olympic Games’ successful delivery, but also aimed to build a lasting legacy that gave back to the East London community. After the event concluded, we oversaw the sensitive dismantling of temporary venues, structures, and concourse areas. In their place, we created permanent parkland for residents and visitors to take a break from the bustle of city life.

Our approach to the park’s structures, bridges, and highways also had the Olympic Games’ long-term impact at its heart. These resilient assets were designed from the outset to align with the park’s landscape following the event. This reduced the number of interventions required after games, avoiding additional reworks, saving costs, and minimising CO2 emissions.

In 2012, the project’s successful renovation of one of London’s largest brownfield sites earned it the CEEQUAL ‘Excellent Whole Project Award (95.8%)’. The park has become a catalyst for regeneration in East London, offering the local community a permanent green area to enjoy for generations to come.

Watch more about our role in landscaping the Olympic Park.
To view this video, you must enable cookies. 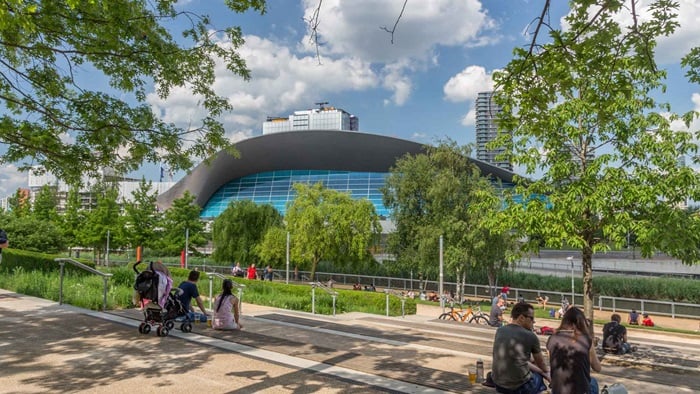 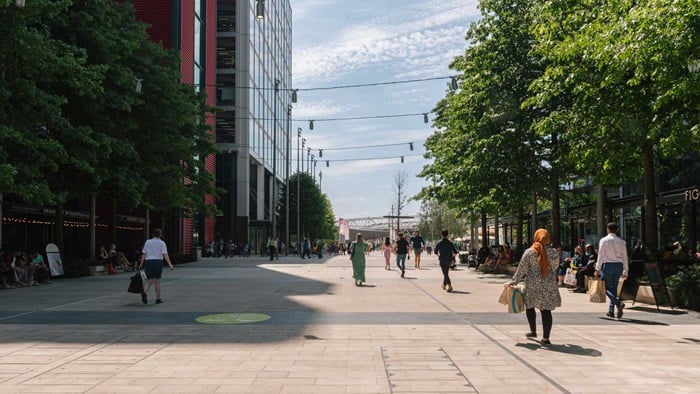 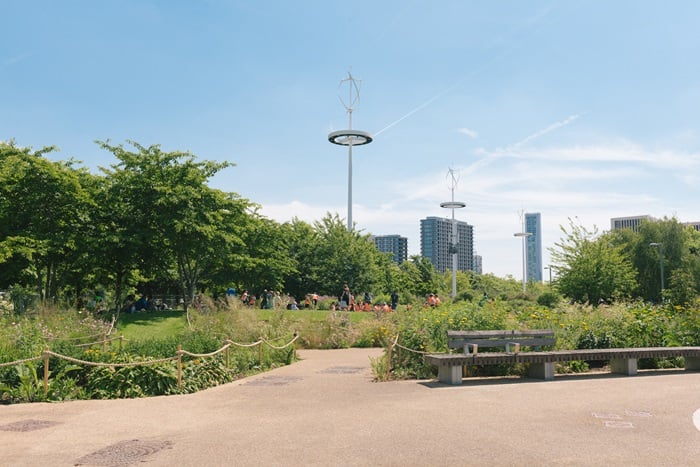