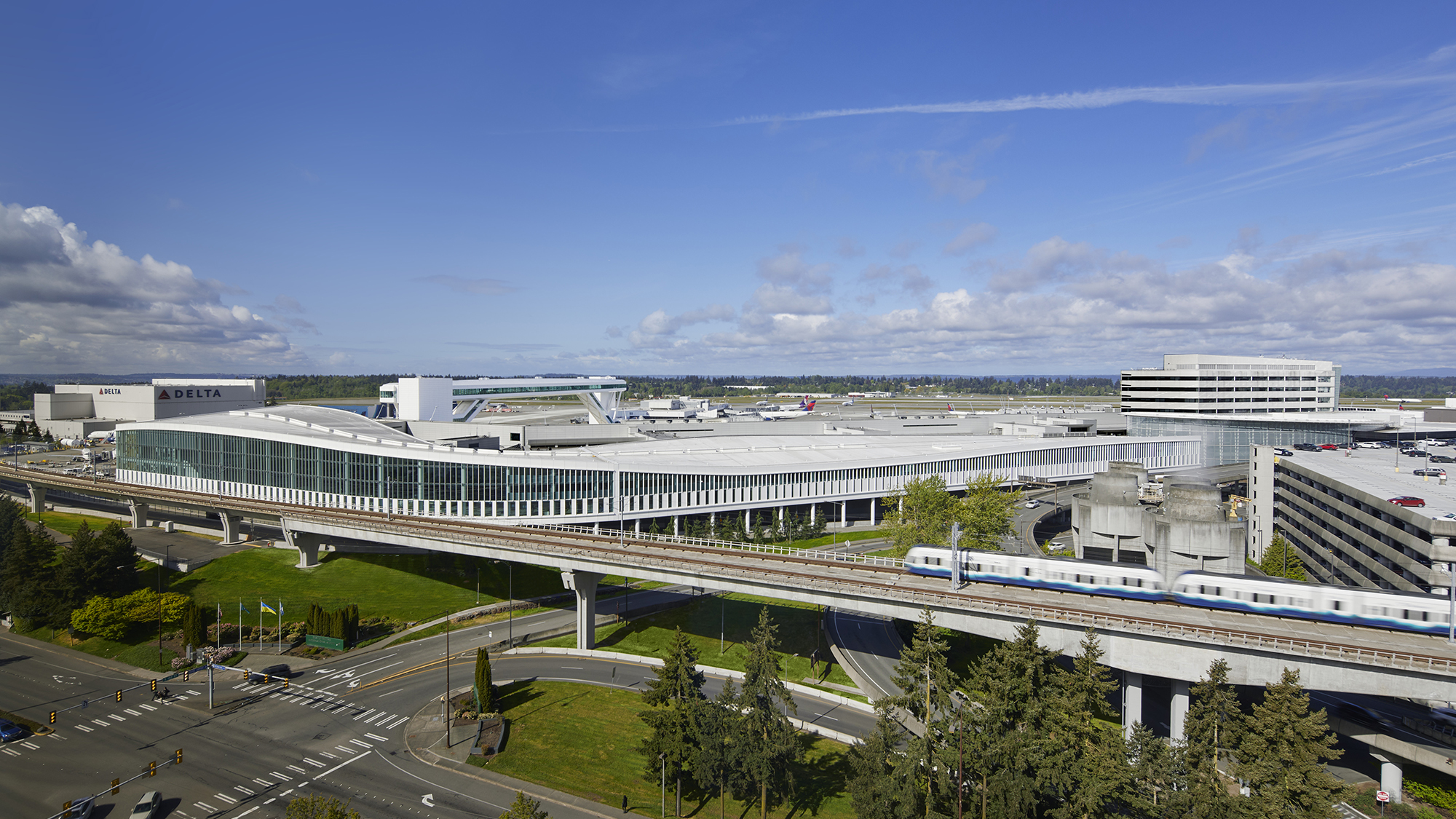 Over the past decade, SEA has seen a steady and significant increase in international flights. As a result, the airport was experiencing a shortage of international arrival-capable aircraft gates and the former customs area was beyond capacity. The Port of Seattle, which owns and operates SEA, assembled a design-build team to create a high-quality passenger experience and advance the Seattle area as a travel gateway.

With the Port of Seattle, SOM, Clark Construction, and other team members, we developed a plan for the large-scale 450,000ft2 International Arrivals Facility (IAF) with a connecting aerial walkway to support a doubling of the airport’s international flights and support international passenger growth over the next 25 years.

The efficiency and design of this secure facility allows the airport to better serve international flights and passengers each day — increasing capacity to serve up to 2,600 people per hour. Arup provided a breadth of expertise across the facility, including aviation planning, passenger flow modeling, security, airport information systems, smoke control CFD modeling, terminal-wide voice paging, acoustic consulting, and early phase mechanical, electrical and plumbing engineering, as part of a collaborative design-build team for the Port of Seattle.

To meet demand, the new facility increased the number of gates capable of serving international wide-body aircraft from 12 to 20, as well as the number of passport control podia and baggage claim carousels. The new design also utilized a “bags first” claim process, which offers direct access to ground transportation and reduces passenger connection times from 90 to 75 minutes.

The new Federal Inspection Services (FIS) processing area, run by US Customs & Border Protection (CBP), is the largest at any airport thus far to use the “bags first” approach. This innovation allows for faster processing of passengers, shorter passenger queuing times, and improved utilization of CBP officers. Our detailed passenger simulation models played a key role in determining the facility’s requirements for this advanced approach and facilitated airport, airline, and agency review. 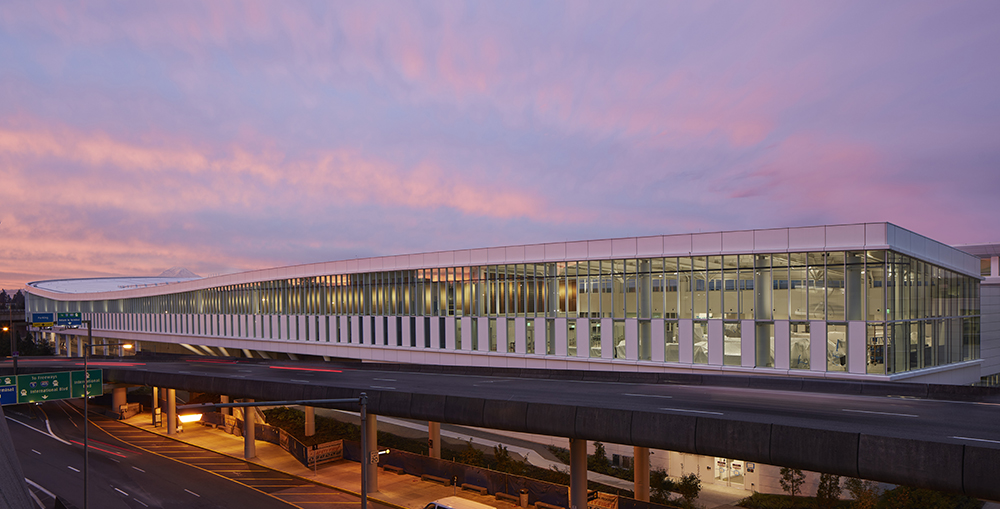 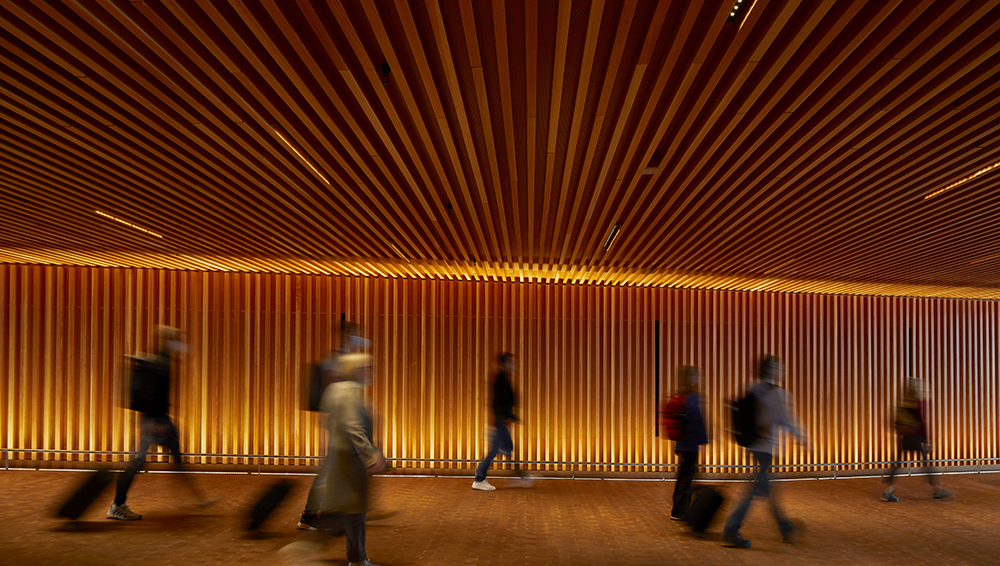 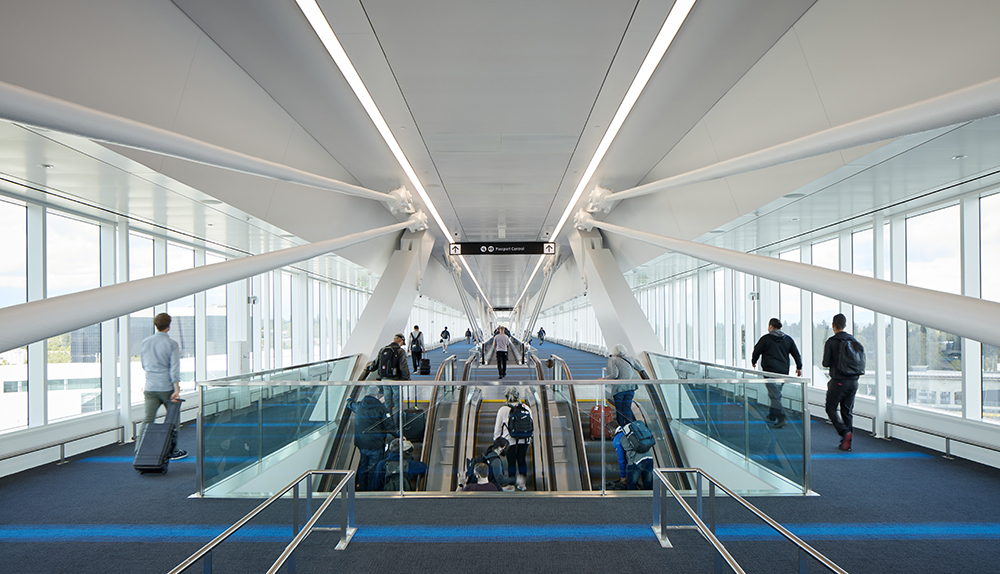 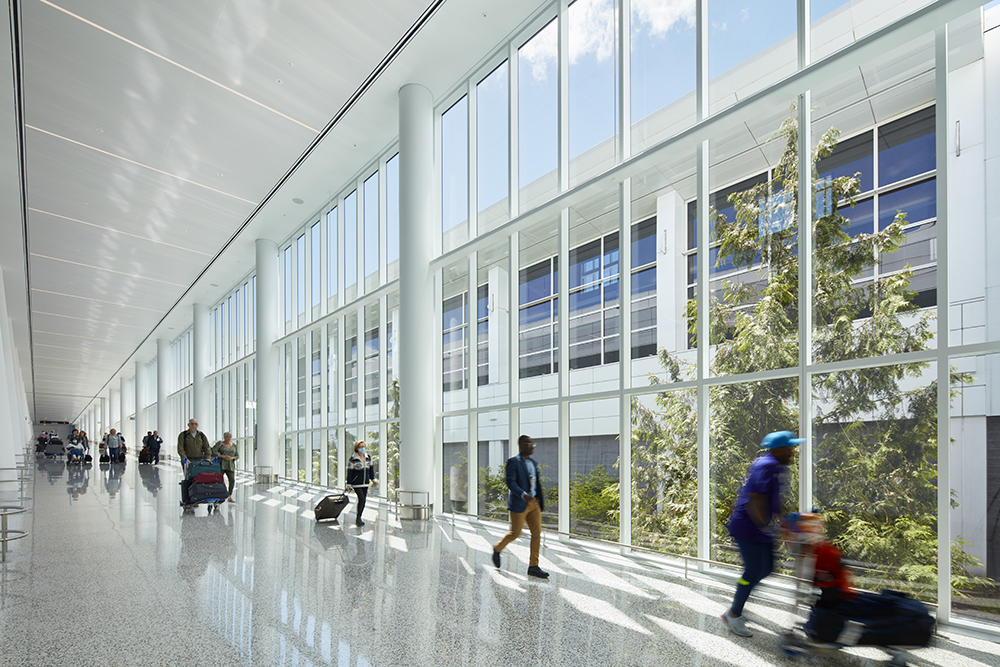 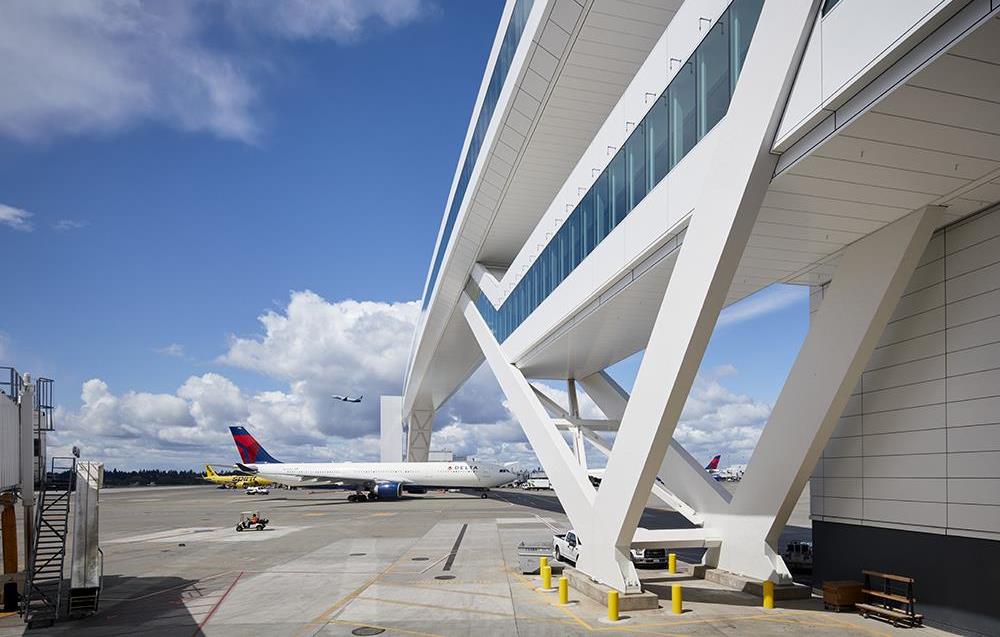 The Arup design team applied a suite of complex simulation and modeling techniques to understand the flow of passengers through the future facility. The design team used Simio, a discrete-event simulation modeling software, in conjunction with Arup’s MassMotion, an advanced agent-based passenger simulation modeling software, to model the flow of passengers through the airside connector and IAF and to clearly define the area requirements for processing people at immigration and baggage claim. Using these tools, the team optimized the layout and proposed operations of the facility to enhance the passenger experience and maximize comfort, while accommodating stringent and evolving federal regulations.

Announcements you can hear

The IAF’s voice and visual paging systems (VPS) are another feature of the innovative design. The system includes public address and visual paging coverage for all public areas in the airport expansion, as well as voice paging for office and support spaces for the customs and border protection areas.

Utilizing 3D modeling and simulations, our team verified the design would meet the stringent standards set by the Port of Seattle and allowed stakeholders to hear the simulated performance of the VPS from various locations within arrivals. To provide even and intelligible coverage throughout the large, open-volume arrivals hall, we designed a system of digitally steerable phase-array loudspeakers, which allow passengers to clearly hear announcements and reduce the build-up of reverberant sound that can muddy speech. Working with SOM, the loudspeakers are seamlessly integrated into the impressive architecture of the new facility.

The use of audio simulation years in advance of the completion of construction of the IAF indicated that the Grand Hall of the IAF would have quality audio meeting or exceeding the performance requirements set by the Port of Seattle. After experiencing the audio in the now completed baggage claim area I can say the validation of the modeling has been proven. The simulation was very representative of the final product and is an excellent tool for stakeholders of all levels. The audio solution produced by Arup and SOM will serve travelers in the IAF for many years to come. ” Todd VanGerpen SEA Innovation and Systems Manager

Our early phase plumbing engineering services helped prep the Port to realize long-term aspirations for reclaimed water usage to reduce their potable water footprint. A recycled water piping system was implemented to all non-potable fixtures for future use, and the Port utilized low-flow plumbing fixtures on the project and as a new standard for the airport going forward. The team also conducted a highly detailed rainwater analysis of the complex curved roof structure, which is roughly 200,000ft2, to determine gutter and rain leader sizing.

While the building does not include any rainwater harvesting, it is ready to accept a supply of recycled water piping with no service downtime. This foresight has prepared the IAF to contribute to sustainability objectives and to reducing the overall demand for potable water by the Port.

The Arup team designed HVAC systems for a wide variety of spaces in the facility, including baggage handling, baggage claim and the pedestrian walkway, as well as office, lab, and fitness areas. We addressed several challenges in the design, including concerns about comfort in highly glazed areas, maintaining pressure relationships between adjacent spaces, and designing for active smoke control.

To achieve optimal outcomes, we performed computational fluid dynamic (CFD) analysis to verify comfort conditions in the extremely tall baggage claim areas as well as other spaces with unusual air distribution criteria. We also worked closely with the airport’s fire marshal and building department, conducting dozens of CFD analyses to demonstrate the performance of the smoke control system. 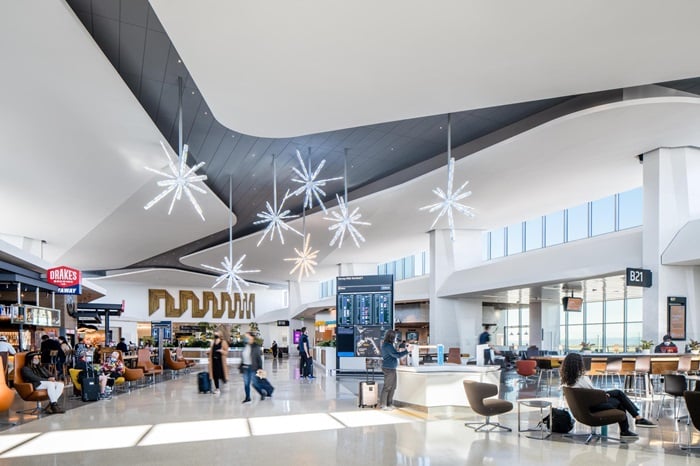 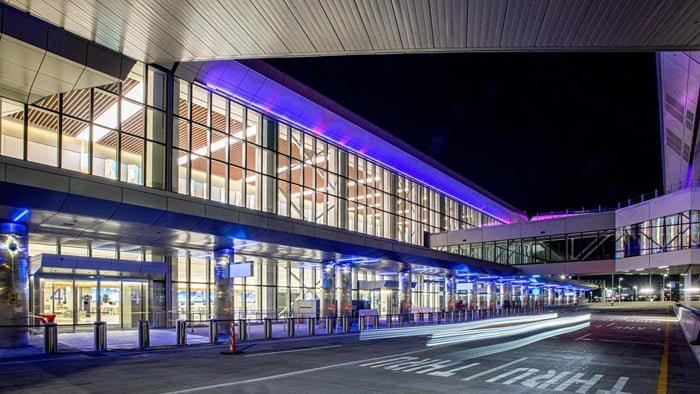 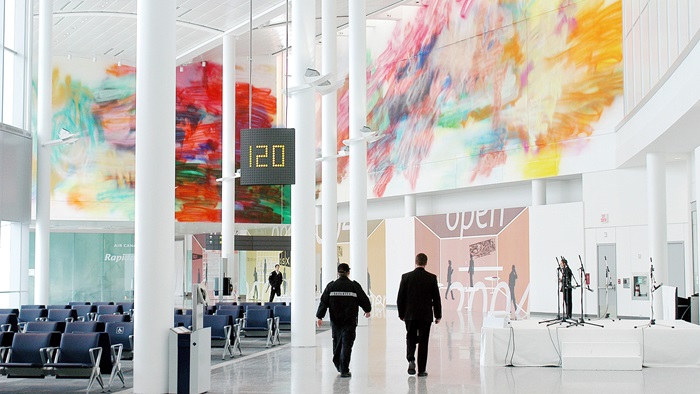