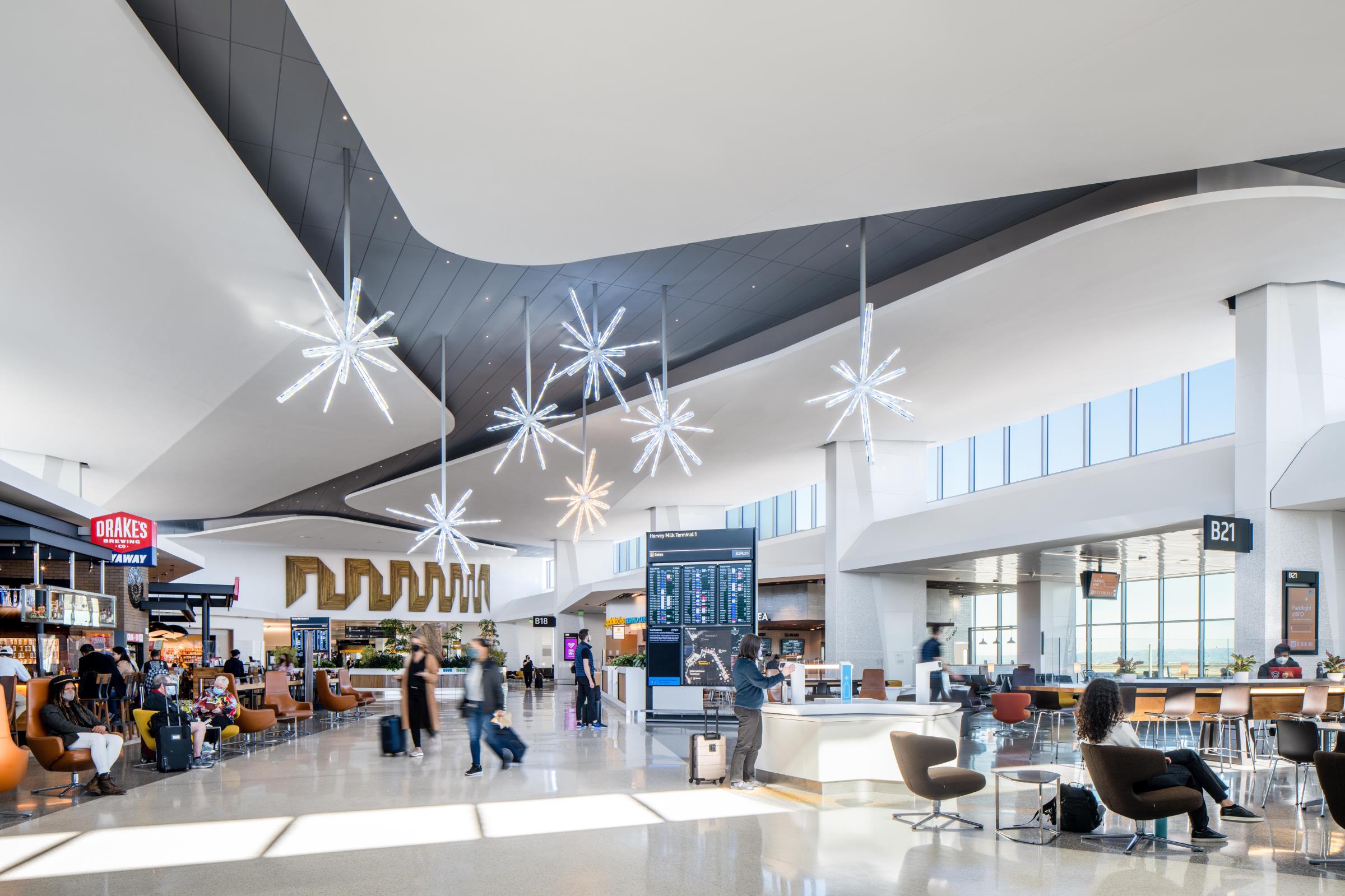 New terminal revolutionizes the travel experience for millions of guests 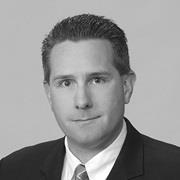 Terminal 1 of San Francisco International Airport (SFO) was built in the early 1960s and renovated in the 1980s. However, in recent years, the aging terminal could not keep up with the demands of the millions of passengers who pass through it every year.

To address this, the Terminal 1 Replacement Program was executed by two separate teams who worked in close collaboration from the outset: Boarding Area B (with an Austin-Webcor joint venture as general contractor and a design team led by HKS-Woods Bagot-ED2-KYA joint venture architects) and Terminal 1 Center (with Hensel Phelps as general contractor and a design team led by Gensler-Kuth Ranieri joint venture architects). During the construction process, the airport arranged for both teams to work together in a collaborative working space on the SFO campus known as the “Big Room,” with over 120 design, construction, and SFO professionals situated together to deliver the program as a single team. SFO’s goal was to revolutionize their guest experience, while revising, fostering, and celebrating a modern romance of travel.

As the main engineer on the Boarding Area B design team, Arup was appointed as the primary designer for the airside elements of the project, including aviation planning, civil engineering, and sustainability consulting, in addition to building design services including mechanical, electrical, plumbing, and acoustics/audio-visual. Opened in three phases (2019, 2020, and 2021), Boarding Area B is now fully operational with 25 aircraft gates, all in a spacious terminal building with two levels and a mezzanine. The building features expansive passenger waiting rooms, food & beverage and retail concessions, an automated baggage handling system, connections to ground transportation, and new post-security connections to the international terminal, enabling the new facility to handle both domestic and international flights.

As the lead airside civil engineer for the project, we were also responsible for design of the 30-acre apron and taxiway reconfiguration, which was delivered in multiple stages. We coordinated extensively with the airport’s airside logistics team to maintain operational flexibility during the staged construction, including provision of temporary taxilanes and stands.

Our multidisciplinary teams helped deliver a highly energy-efficient building despite the intense energy uses of a 24/7 airport terminal. From the start of the design, Arup identified two critical areas for reducing energy consumption: the heating and cooling systems, and the baggage handling system. The mechanical system features extensive use of radiant ceilings for heating and cooling, allowing for a smaller and extremely efficient displacement ventilation system. Electrochromic glazing is used throughout the concourse level (with Low-E high performance glazing at the clerestory level) to provide high-quality daylight while reducing glare and heat gain. The boarding area is partly powered by a 1 MW solar array located on the building’s roof. In addition, an advanced modular baggage handling system – the first of its kind in the United States – uses half the energy of typical belt-type conveyors. Altogether, Harvey Milk Terminal 1’s sustainable design measures helped to achieve over 40% energy savings, ultimately allowing Boarding Area B to achieve LEED v4/4.1 BD+C New Construction Platinum certification, the first airport terminal in the world to do so. 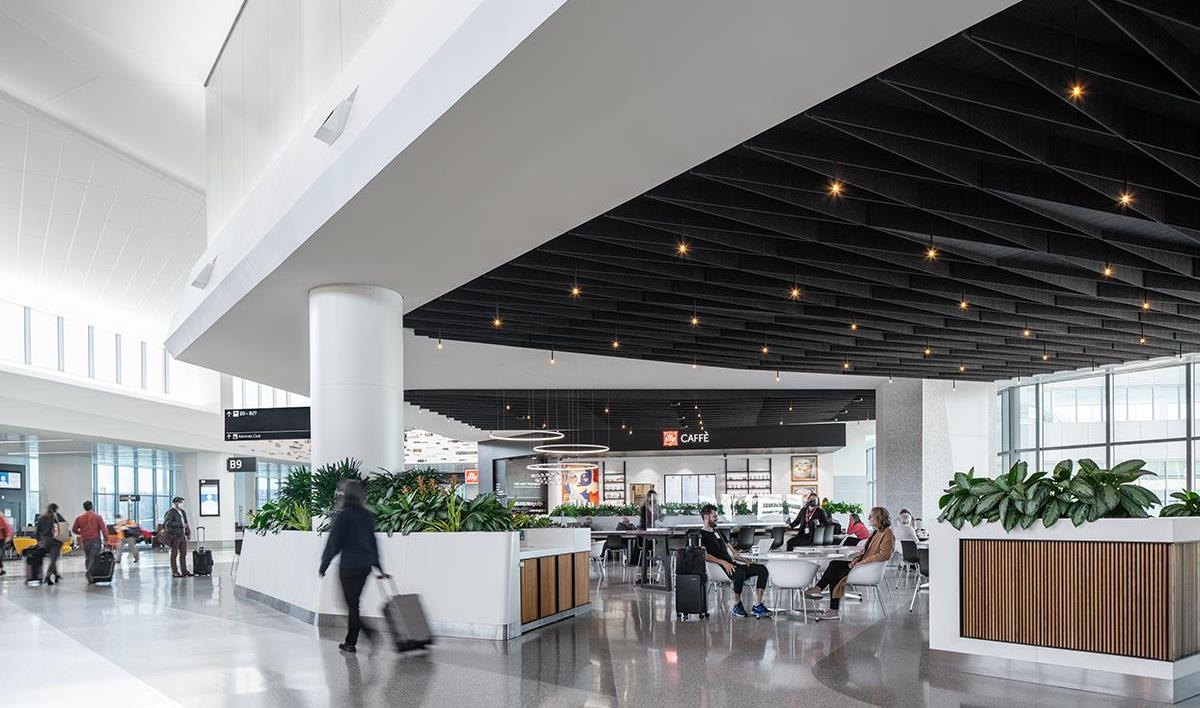 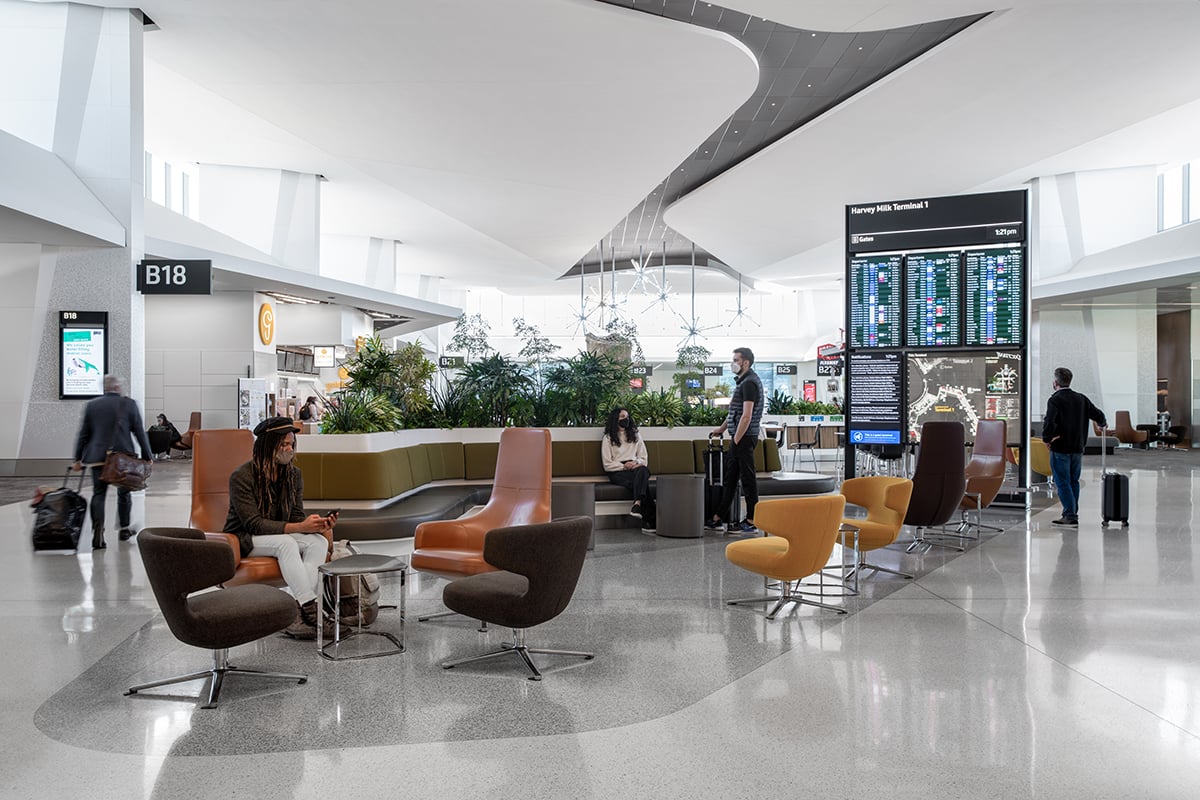 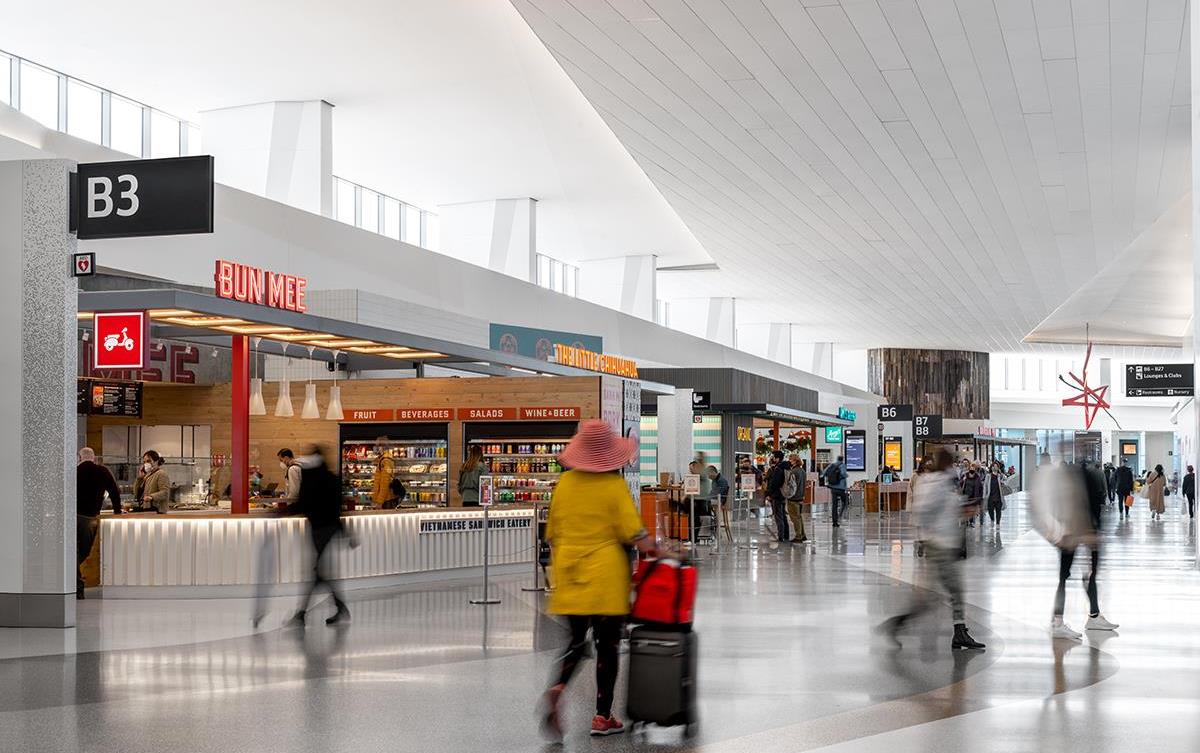 We collaborated with the design-build contractor to determine a phased approach and construction schedule that maintained aircraft operations and flexibility. Phasing was optimized using temporary remote gates, reconfiguring existing gates, and interim grading solutions. Temporary utilities allowed existing services and system redundancy to be maintained while the permanent facilities were built. 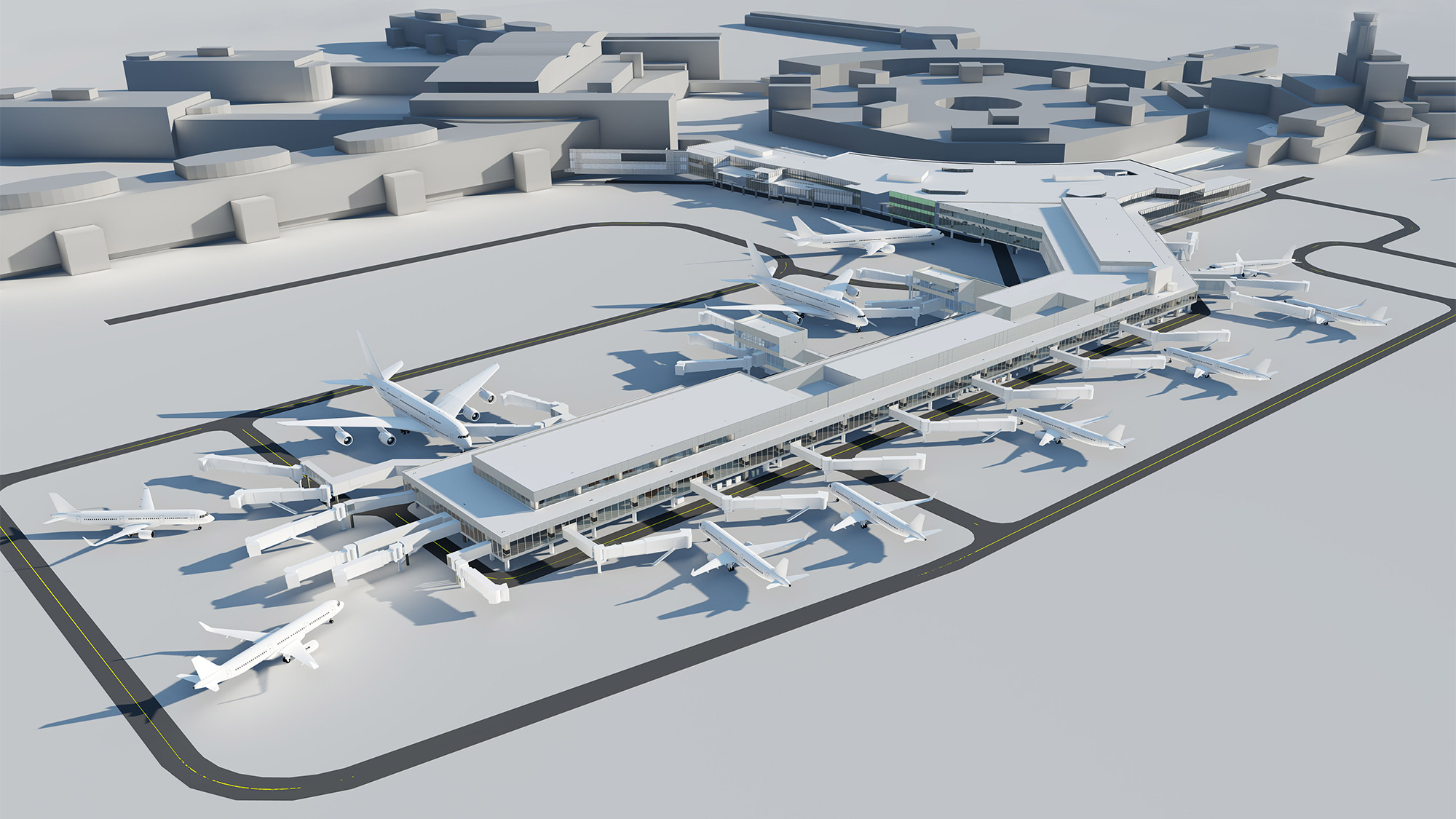 Our aviation planning specialists developed a new aircraft parking plan that flexibly accommodates a modern aircraft fleet mix, including several two-for-one multi-aircraft ramp system gates sized for A380 aircraft. We worked closely with airline and airport stakeholders, as well as the airport fire department, to fully understand the ramp operation and safety practices from all perspectives.

Boarding Area B now has vehicle service roads both at the tail of stand and head of stand. As head of stand roads are a first for SFO, this represents a quantum shift in thinking and planning for a more efficient ramp operation.

SFO is committed to protecting global and human health, and Arup worked with the multidisciplinary design team and with the airport’s sustainability leaders to make sure everything from structural materials to floor finishes to unique airport systems met rigorous sustainability criteria. By optimizing the cement content of the structural concrete, we were able to reduce the embodied carbon footprint of the entire building by over 10%. The furniture, carpeting, and wall coverings are all free of the toxic flame retardants routinely added to fabrics.

In a first for the building industry, we obtained an Environmental Product Declaration (EPD) and a Health Product Declaration (HPD) for the passenger boarding bridges — a critical piece of information that allows for the assessment and improvement of the environmental footprint of building components. We also protected occupant health by reviewing all interior materials (within the waterproof membrane) against strict air emissions criteria and selected an outdoor air filtration system to protect passengers as well as airport employees from outdoor air pollutants and jet fuel odor. The key sustainability strategies were vetted with SFO using a triple bottom line (environmental, social, and financial) cost-benefit analysis tool to bring consideration of these strategies’ broader benefits to passengers and the community into the design process.

As part of its strategic plan to reduce carbon emissions, SFO has been incentivizing airlines and ground service providers to shift their vehicle fleets from diesel to electric. We carried out a study to assess the appropriate number of electric vehicle charging stations, assuming a 100% electric vehicle fleet as the basis for design. After evaluating the results, we recommended the addition of four charging stations per small gate and 10 stations per large gate.

The airside grading and utilities were modelled using AutoCAD Civil 3D and integrated into the project’s BIM model using AutoDesk BIM 360 Glue to facilitate sharing, coordination, and clash detection in a “real-time” 3D environment. This accessible platform provided a single shared space for the design and construction teams to design, collaborate, innovate, and ultimately construct and document the project. 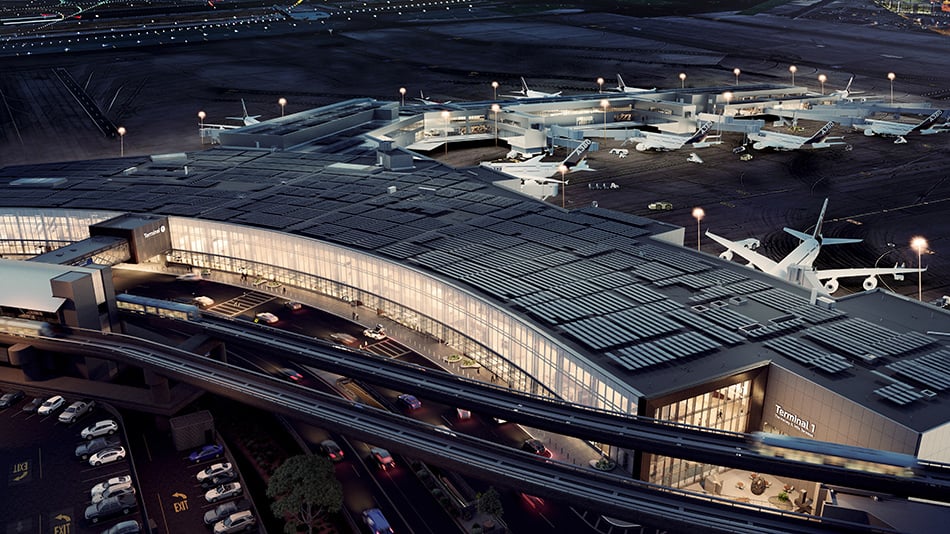 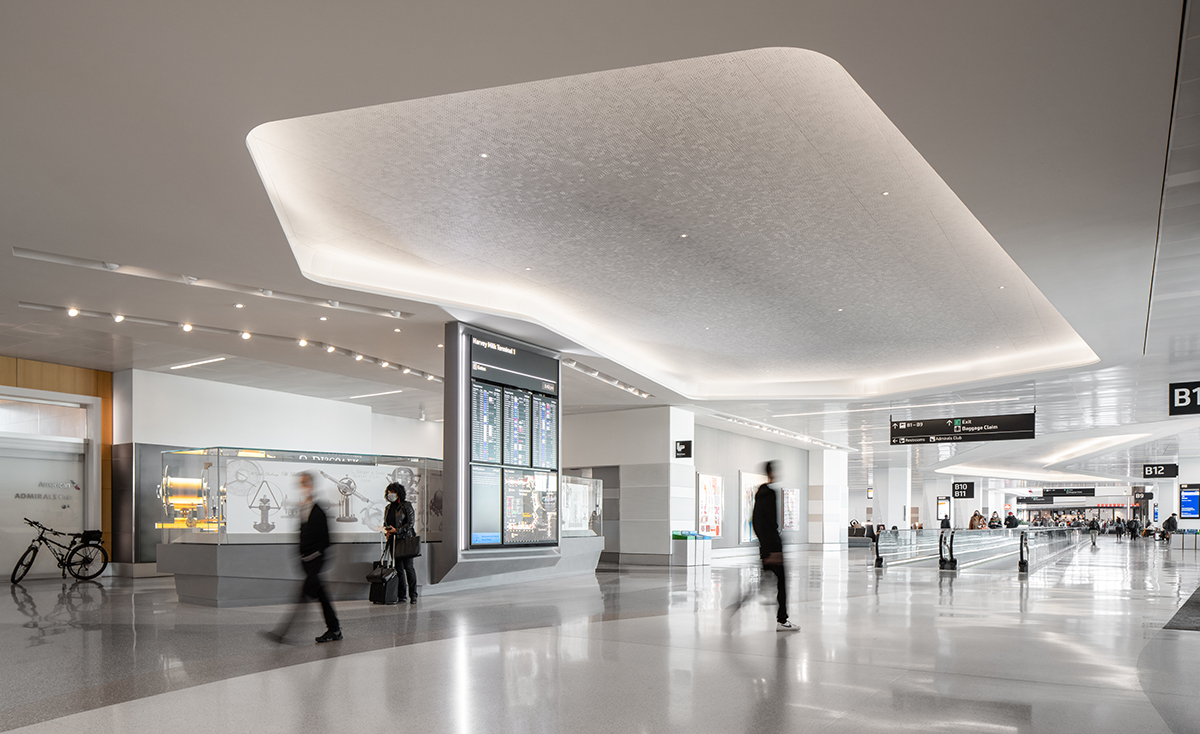 "Stress-testing" the design with WeatherShift

As the airport is a piece of critical infrastructure located adjacent to the San Francisco Bay, we conducted a resiliency assessment of the project’s airside drainage infrastructure for a range of projected future climate change scenarios. We employed the WeatherShiftTM tool to test the robustness of the drainage design, using climate change models that predict rainfall intensity increases of 10% to 25% by 2090.

This “stress-test” informed design adjustments that increase the system’s resilience under the higher-intensity storms that are predicted to occur in the future. Most of the drainage system is capable of handling the increased rainfall intensity, but an isolated susceptible "weak link" in the system was upsized from 18in to 24in to provide suitable additional resilience. The cost of the improvement to provide additional resilience was nominal (less than $5,000), which represented exceptional value in comparison to the potential costs of future operational and maintenance impacts.

Learn more about our work on SFO, landmark refurbishment projects in Hong Kong and the Netherlands, as well as the role Arup played in the design of The Christie Proton Beam Therapy Centre. 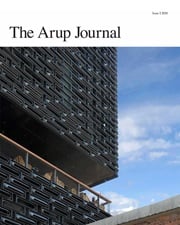 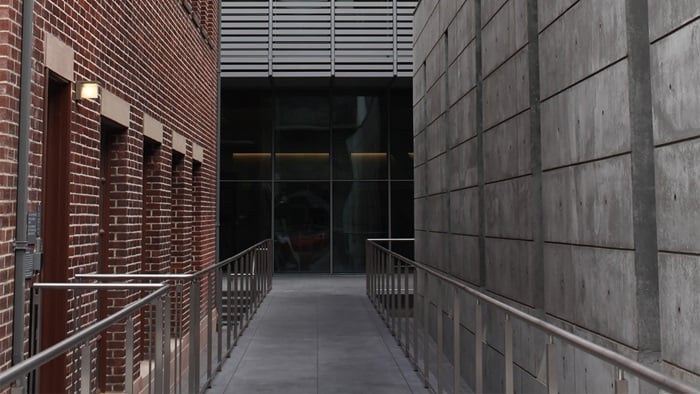 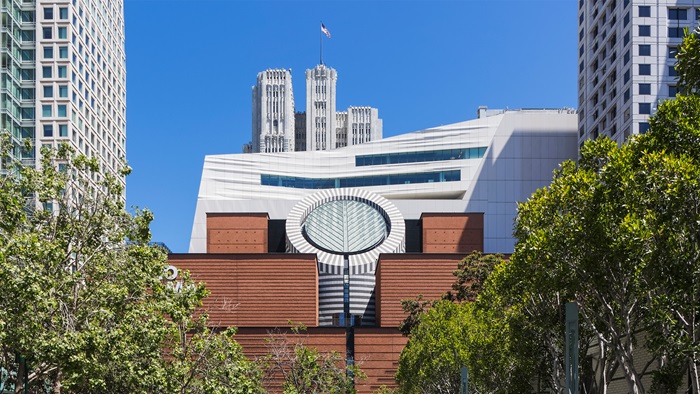 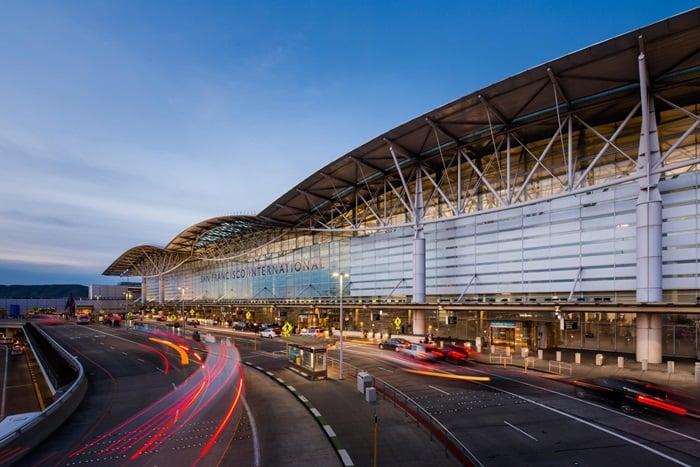 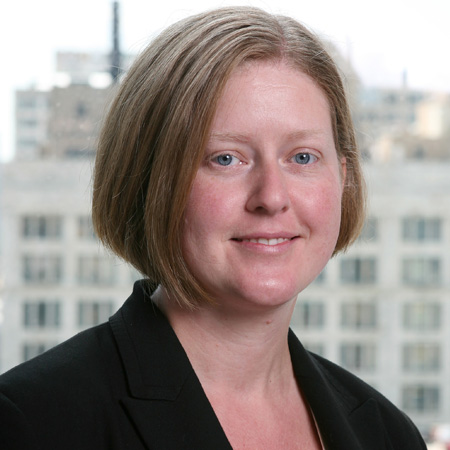