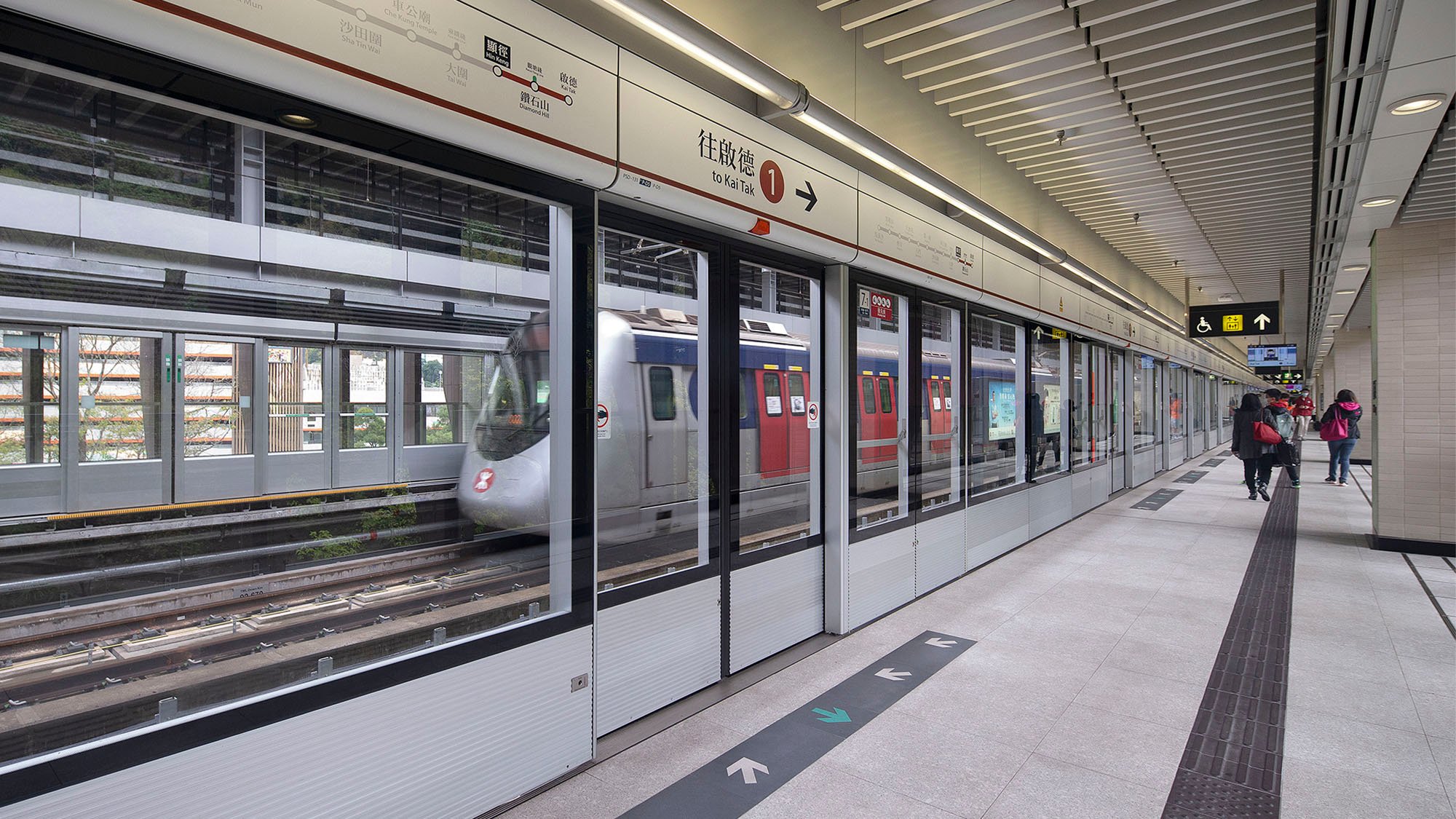 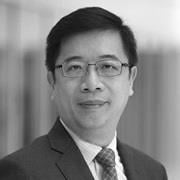 The Shatin-to-Central Link (SCL) is a 17km-long strategic railway extension in Hong Kong. By connecting the existing West Rail Line and Ma On Shan Line from East-to-West (EWL) through new stations and extending the East Rail Line across the harbour from North-to-South (NSL), it serves the New Territories, Kowloon and Hong Kong Island, significantly improving the connectivity, coverage and convenience of the entire rail network.

For the SCL(EWL), Arup was awarded a number of contracts including the SCL consultancy agreement C1105, where we were the appointed designer and Lead Consultant for the detailed design for Sung Wong Toi to Ho Man Tin; and Contract 1103, one of our award-winning civil works contracts which comprises 4km running tunnels from Hin Keng to Diamond Hill, serving as designer for the Contractor VINCI Construction Grands Projects (VCGP).

Linking up the existing and future railway lines

Our design for Sung Wong Toi station has considered the loading allowance for future major redevelopment at the former Kai Tak Airport and Sung Wong Toi Park with planned topside development. The station comprises a rectangular box with two levels – the platform level is some 35m wide × 285m long whilst the concourse level is 54m wide × 285m long.

In response to the tight physical constraints along the line, the To Kwa Wan station box has a stacked platform configuration to reduce the station footprint and hence the excavation width as the box is very close to a number of old buildings with shallow and deep foundations. Mixed ground TBM and cut-and-cover methods were used for the running tunnels and pedestrian subways. 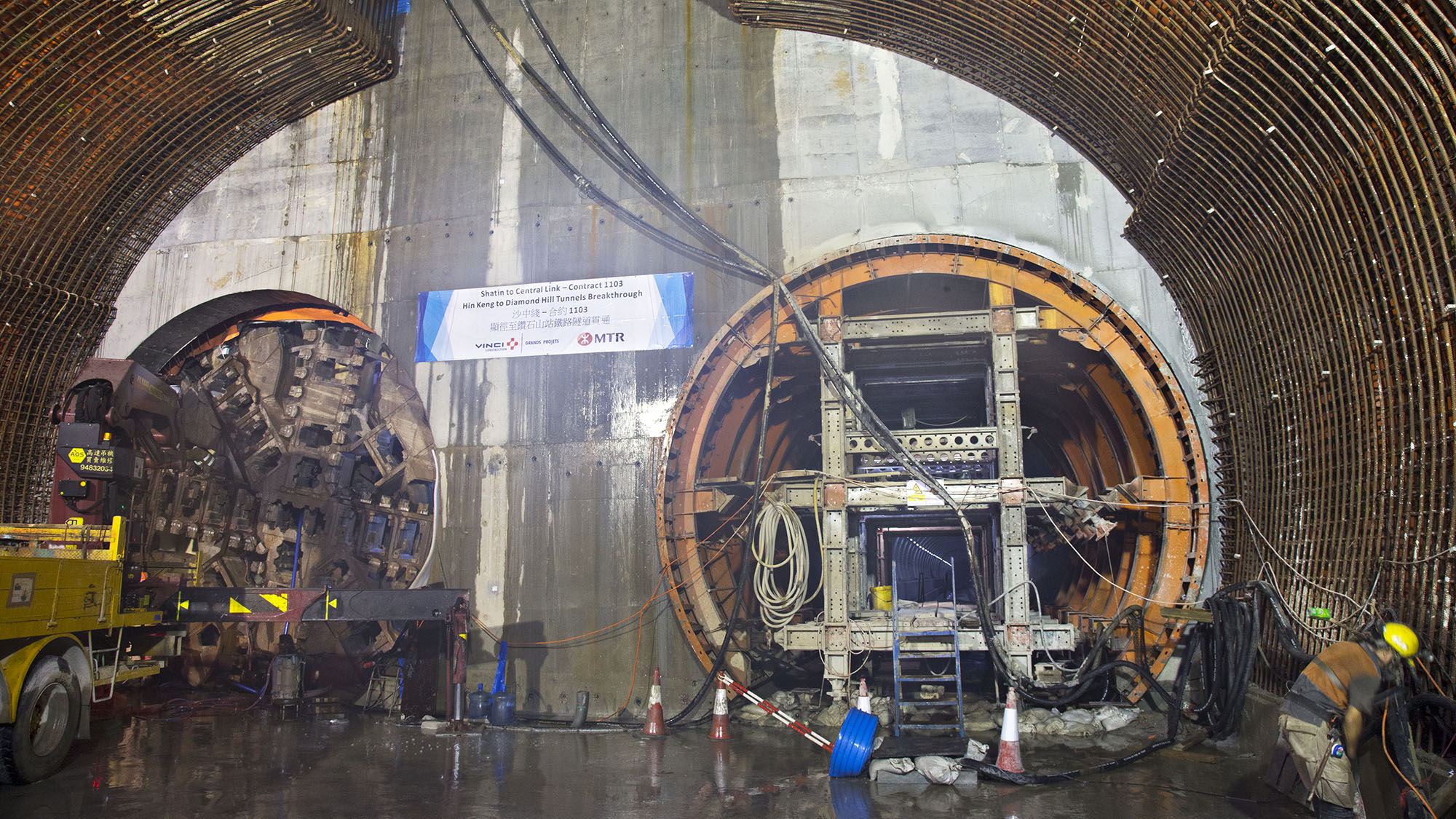 Due to the relatively light weight of the underground ventilation building, flotation of the structure was a major safety consideration. Arup devised an alternative solution by reconfiguring the conforming permanent structure and introducing an underslab drainage system below the base slab to relieve the uplift groundwater pressure, thereby eliminating the need for tension piles and thick slabs. The solution has reduced the risk of adverse ground movement to the buildings nearby and minimised the difficulties and time for constructing diaphragm walls into hard rock.

It has also significantly reduced the volume of excavated materials (approximately 15,000m3) for the ventilation building and the Lion Rock Tunnel, while achieving a carbon emission reduction of about 1,000 tonnes. 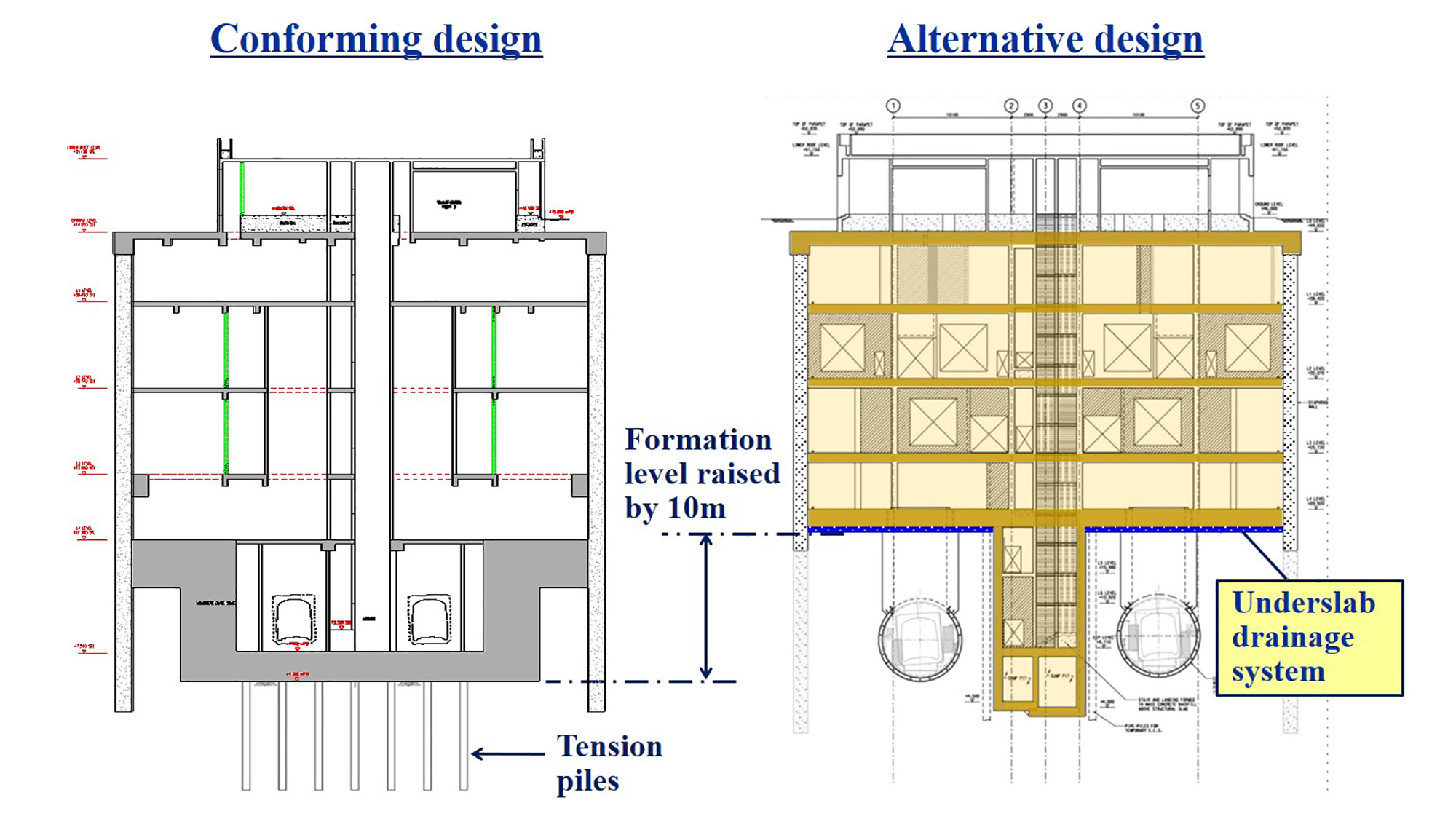 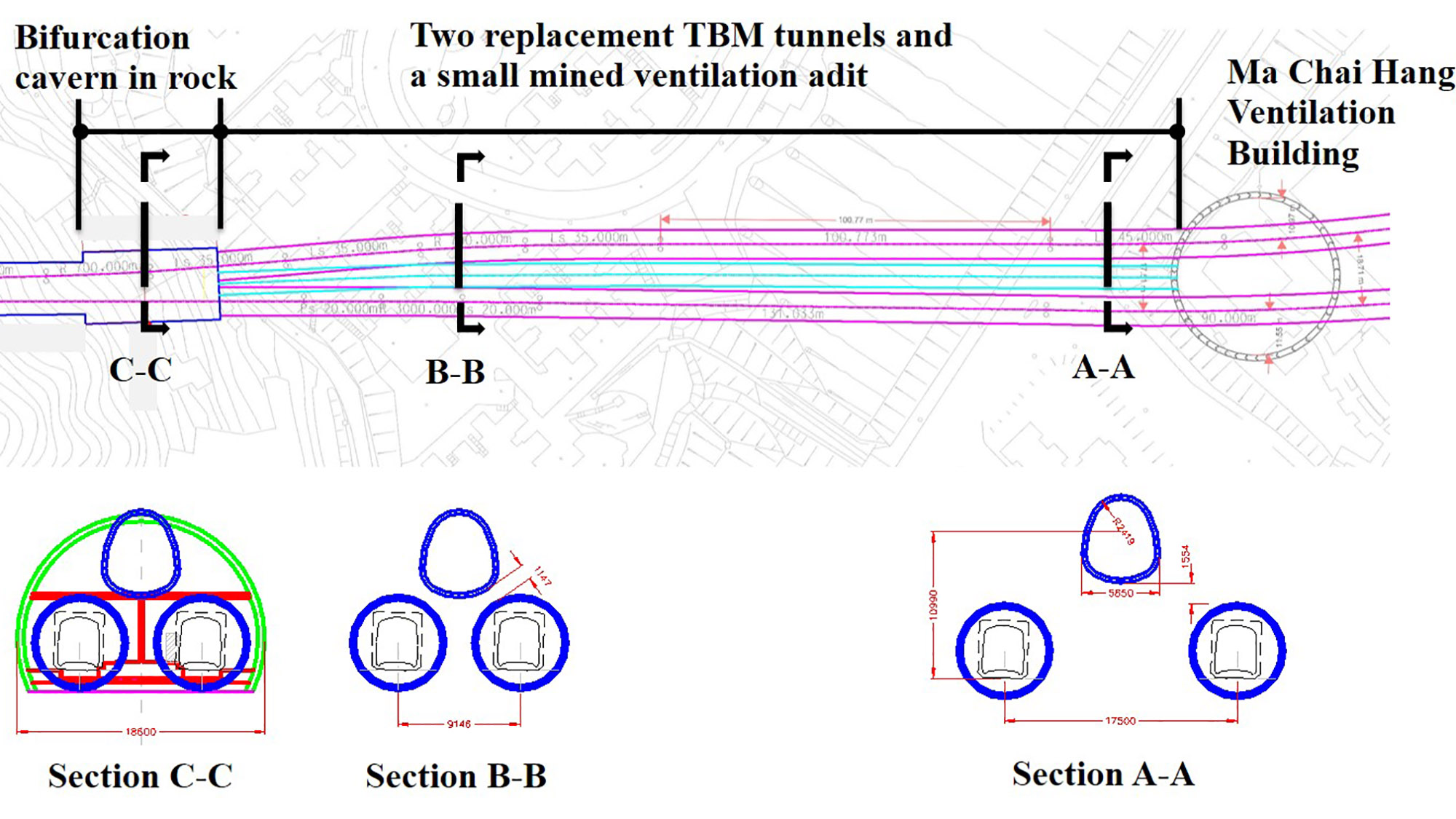 Sung Wong Toi station is located partly within the historical footprint of Sacred Hill which is also known as Hill of the King of Song. During station excavation a large number of archaeological relics were found within the original station footprint, some of them are large in size that need to be protected in-situ while some were temporarily relocated. Arup was then requested to re-design the station to protect the large relics in-situ, allow reinstatement of the relics at the original level and orientation, and accommodate two big display cabinets inside the station concourse for education purposes.

Arup also served as lead consultant for the construction scoping and sequencing of the Hong Kong Section of the SCL, including construction of the new Exhibition Centre Station and interchange facilities, running tunnels and large-scale reprovision of community facilities in Wan Chai – one of the most built-up and busy commercial areas in the city.

Our full use of BIM throughout the design and construction process – one of the earliest infrastructure projects in Hong Kong – played a vital role in tackling the unique challenges posed by limited work sites and numerous interfaces and achieving quality and timely delivery of this highly complex project. 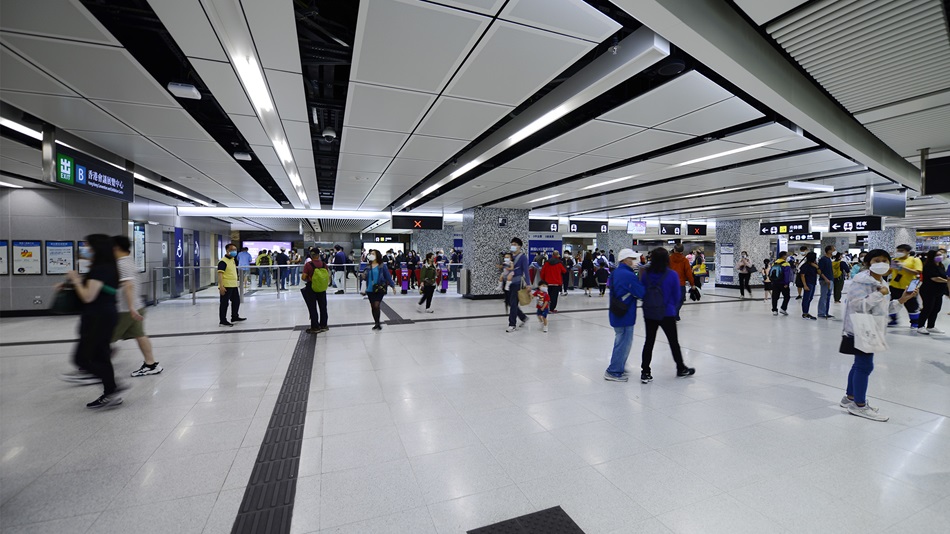 With the opening of the SCL, Admiralty Station has become the largest interchange station in the MTR network. We were engaged for the detailed multidisciplinary design of the new terminus for the South Island Line (East) and SCL to provide four new platforms and interchange with two existing lines.

One of the most significant challenges was the underpinning of the existing Island Line finger platform structural box which also houses the ventilation plant. We designed the proposed phased sequencing of works for removal of the solid rock beneath the box and insertion of a permanent structural framework to carry it, setting a precedent in Hong Kong. 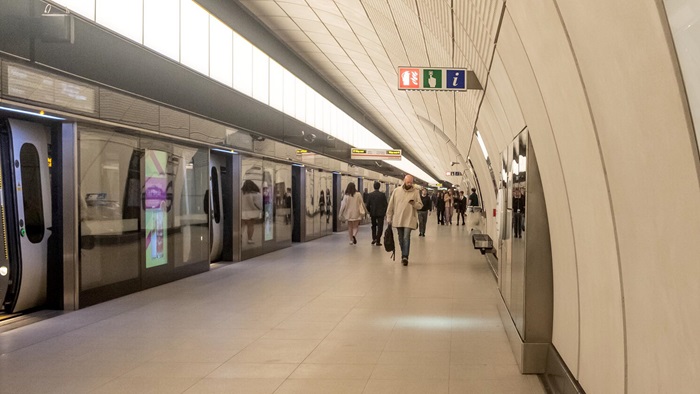 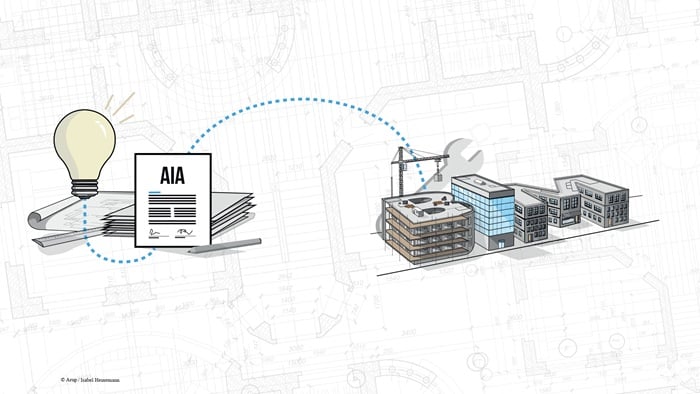 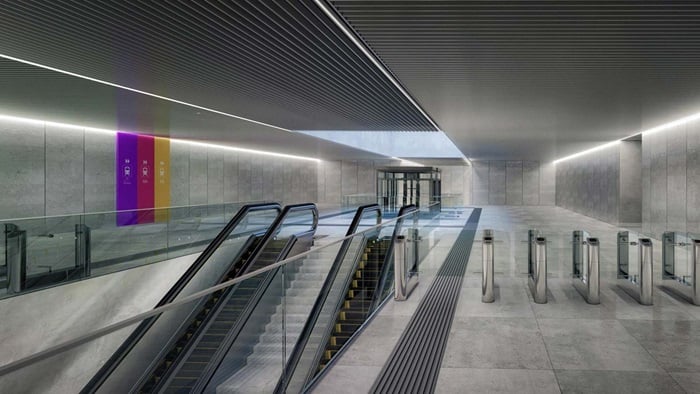 TFP Farrells as Architect and Arcadis as Quantity Surveyor for C1105