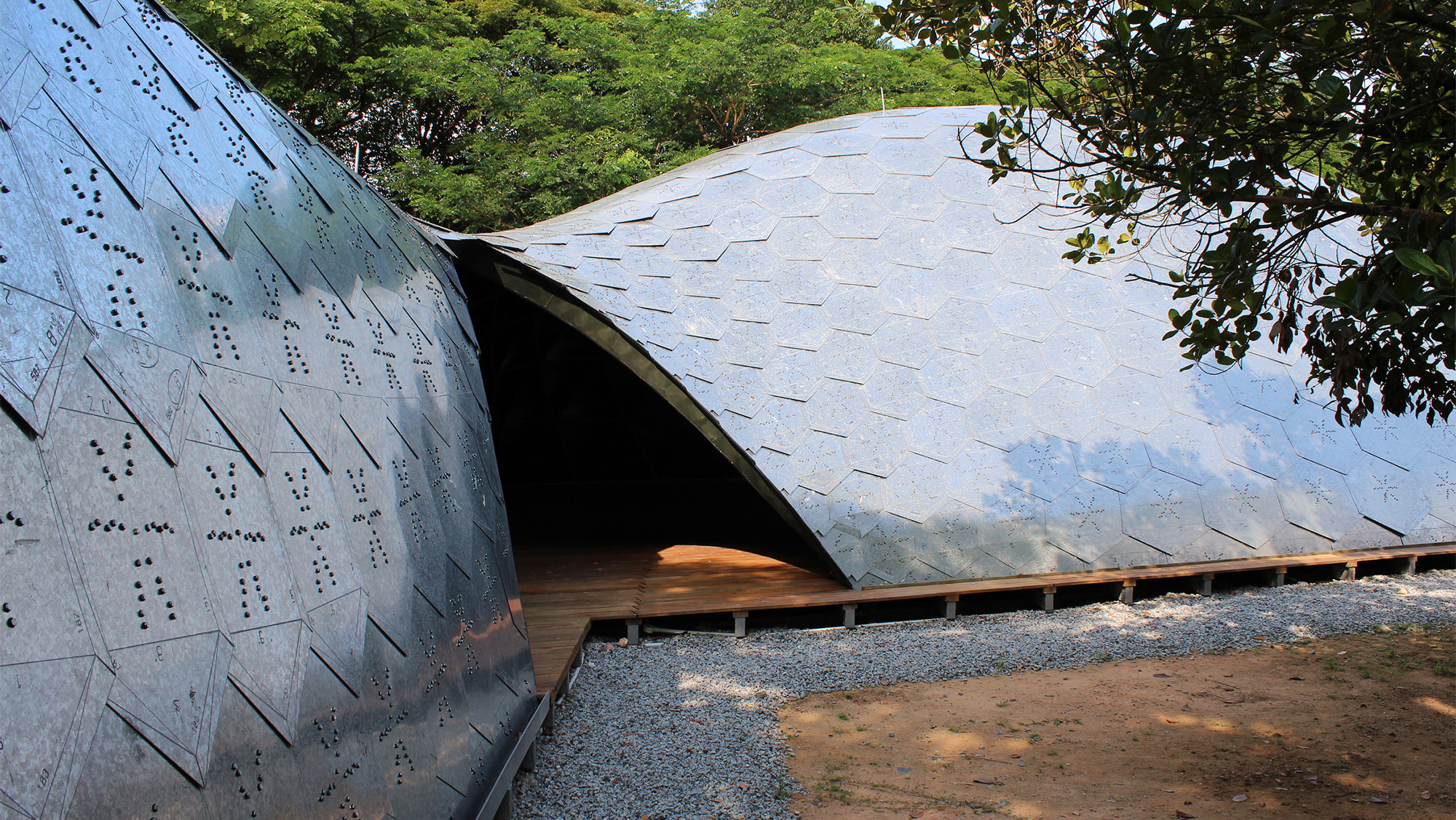 The Singapore University of Technology and Design (SUTD) pavilion is located on a sloping lawn on the temporary Dover Campus.

Accommodating three mature trees and forming a noise barrier toward the Ayer Raja Expressway in the north, the gridshell structure of the pavilion harnesses the site constraints and activates an outdoor space behind the existing library building.

During the day it offers a shaded open-air place to relax, work, and mingle for students and staff of the university. At night it becomes a place for informal gatherings, evening lectures and SUTD community events. Work-desks, mobile bookshelves and wireless Internet transform it into a “third space” between the dormitory and the classroom where intellectual and social exchange occurs in a casual atmosphere. 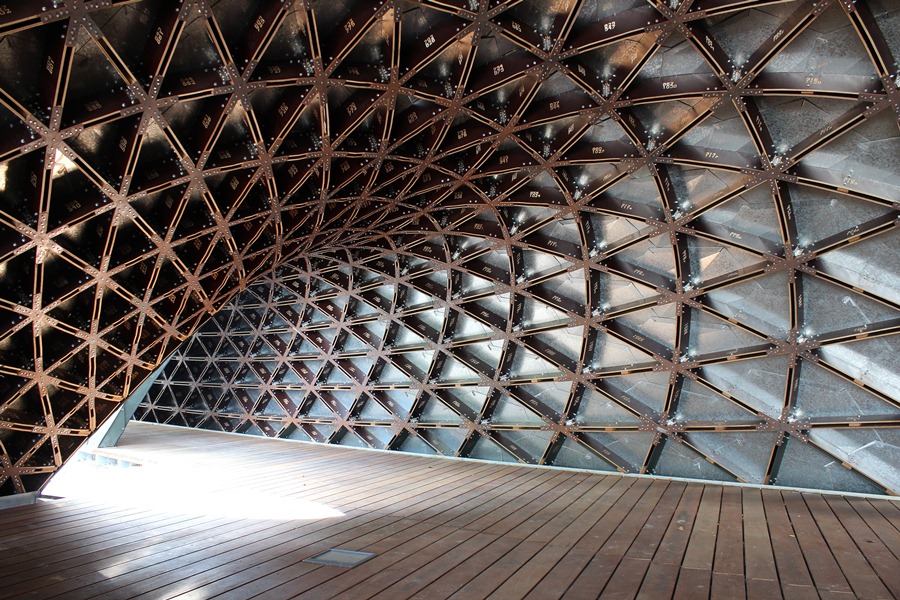 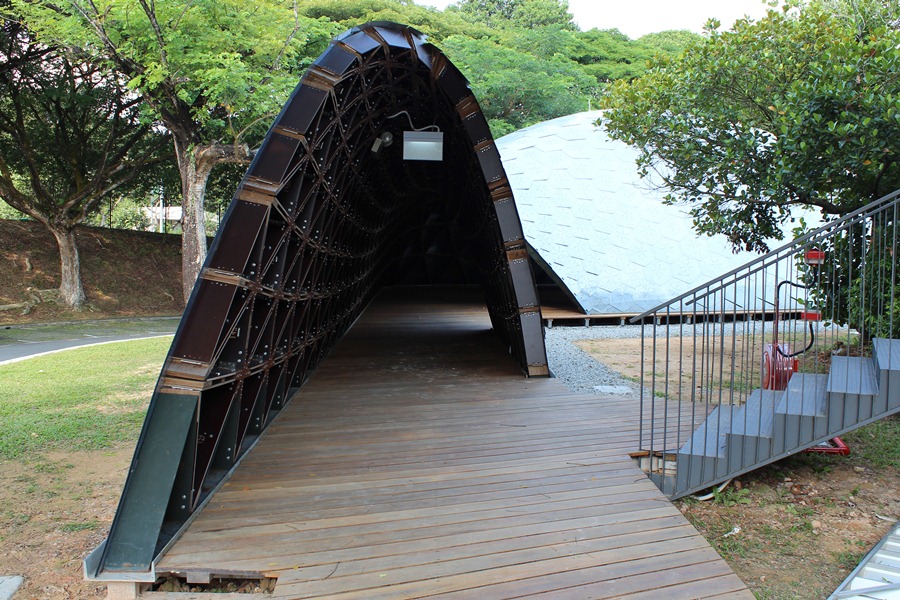 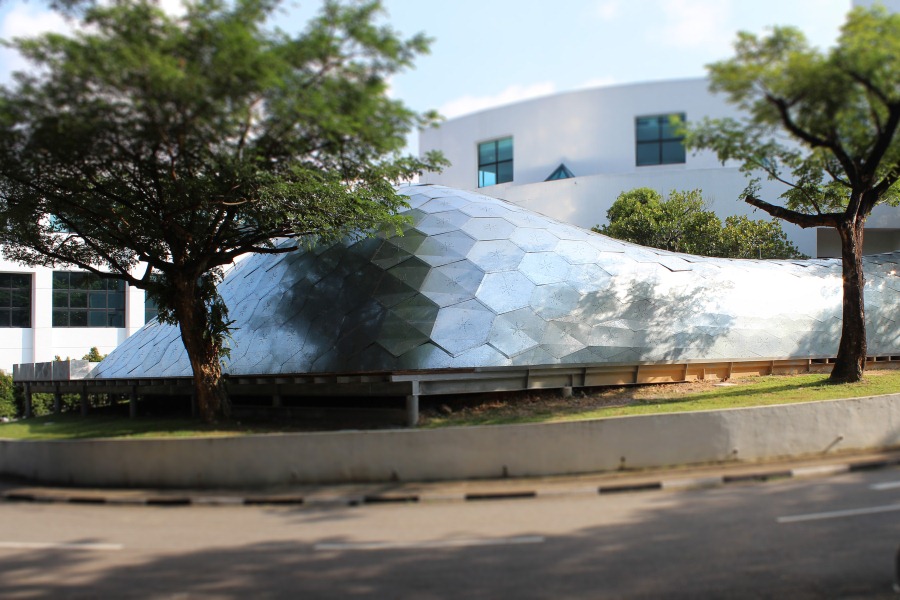 “The SUTD Canopy is inspiring as it is a picture of the future, where digital information from computer models is combined with automation in the fabrication of multiple unique units. The fact that the project was also assembled using relatively simple materials and components often not considered structural in nature made it even more fascinating. Take for example, the 300 stainless steel hinges used as shear connections were bought from a corner hardware store in Little India – an amazing high-tech/low-tech collaboration with a stunning result.”
– Mike King, Principal and Lead Structural Engineer on the project ”

With the use of building information modeling software, Arup and the project team, generated a single drawing that guided the assembly of the pavilion’s complex three-dimensional canopy, using only two dimensional panels from plywood and galvanised steel. The materials were all prefabricated using computer-controlled fabrication, which helped to keep cost low and site work, orderly.

Steel joints from 2mm-thick galvanised steel sheets were cut and used to join six triangular plywood modules – each made of up of three plywood pieces and pre-drilled so that bolts and screws could be accurately positioned. ID numbers, engraved on each plywood and cladding element during the prefabrication process, also remain visible in the finished structure as ornament.

The 500m2 project, based largely on voluntary work by SUTD’s students and faculty members, took a year to complete and will be dismantled and recycled after two years.