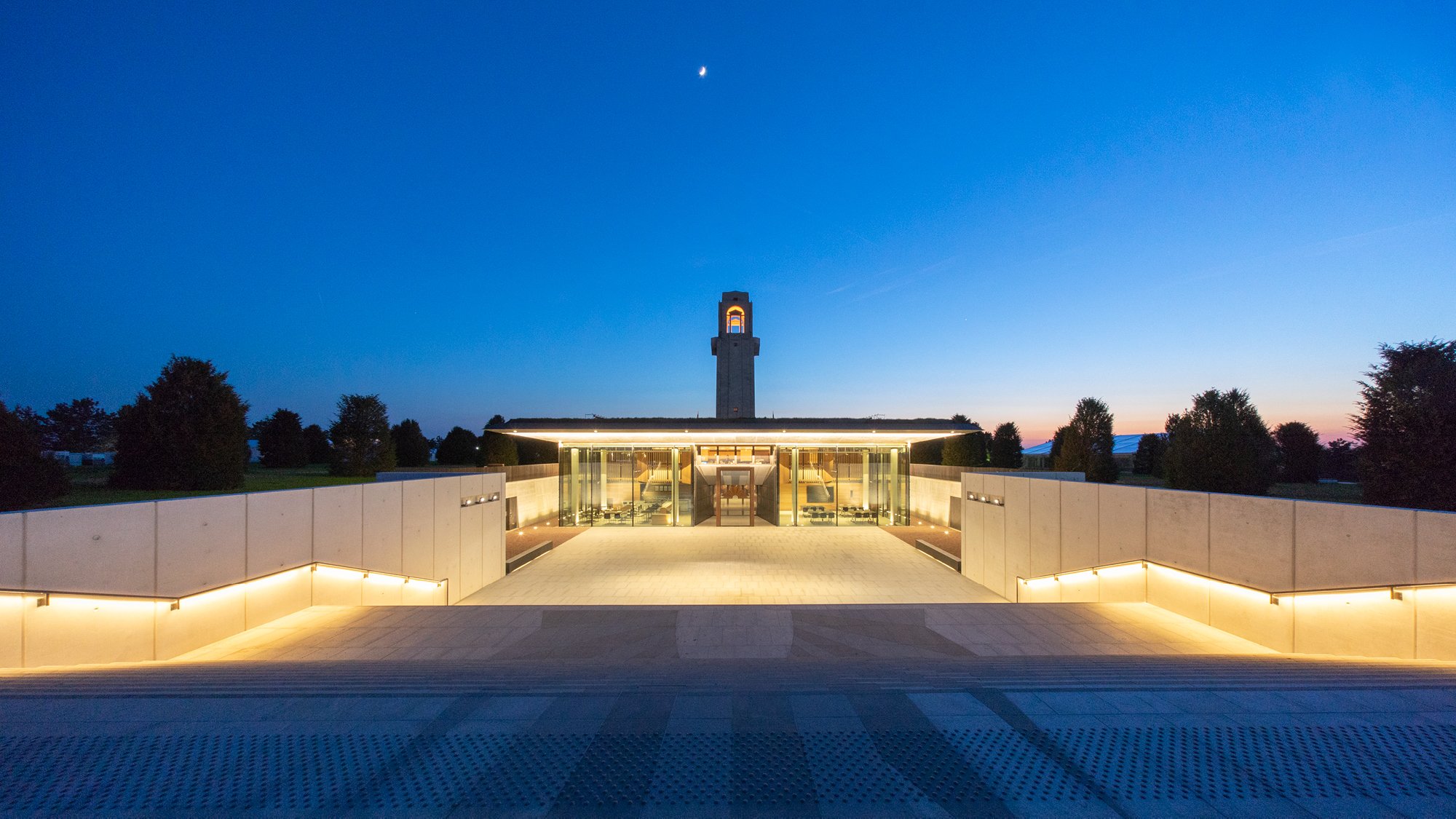 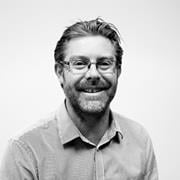 Nestled in the landscape of Villers-Bretonneux in northern France, behind the Australian National Memorial, the Sir John Monash Centre immerses visitors in the experience of Australian servicemen and women who served on the Western Front during the First World War.

Arup was a key part of the Cox Architecture consortium, engaged by the Department of Veterans’ Affairs, whose concept for the Sir John Monash Centre – to commemorate Australia’s Centenary of Anzac – was selected as part of an international design competition.

The new building is partially sunken into the landscape behind the existing Lutyens’ tower and wall of remembrance, with its twin entries accessed through the existing arbours. The Centre’s floating grass-covered roof with its triangular oculus is a defining architectural feature inside and out. It showcases the meeting of architecture and structural engineering and allows the original memorial to take pride of place, supported by a contemporary space below ground plane. Warm, wooden, geometric features and raw surfaces bring a serene sense of the Australian outback to the lush, yet sombre fields.

Subtle lighting and clever integration of services ensure visitors can focus entirely on moving through the space, appreciating the artefacts on display and engaging with the interactive storytelling experiences – Western Front maps, interactive tours and multimedia content in a 360-degree immersive gallery.

In a cross-continent collaboration, Arup drew on a multidisciplinary team based in Sydney, Australia, working alongside Cox Architecture as well as local partners in France to see the new facility sit harmoniously and respectfully alongside the existing Memorial and Military Cemetery.

The Centre officially opened on 24 April 2018, engaging and educating audiences, young and old, as they follow the Australian Remembrance Trail.

A part of the Villers-Bretonneux landscape

An arresting feature of the new Sir John Monash Centre is its meadow-like green roof which seamlessly blends into the Villers-Bretonneux landscape. Arup’s structural engineers devised a triangulated, long span, post-tensioned roof structure supported on expressively articulated columns. From overhead, the centre’s flat roof appears to hover above the natural ground plane – as if it could be lifted to reveal the large, open space of the interpretive centre and galleries beneath.

Inside, the structure is expressed with a striking off-form concrete diagrid ceiling that informs the space planning - gracefully supporting the vegetation above. Sitting below the beautiful floating roof, the building has two subterranean levels founded within the natural chalk geology.

Lighting remains respectful to the Centre’s surroundings – providing a soft additional layer to the heritage structures, architectural design and building fabric. With Arup’s lighting team creating an overall low ambient level of light at night, silhouetting the buildings and accenting the existing main tower as a beacon for the site.

We are extremely humbled to have worked alongside Cox Architecture on the Sir John Monash Centre to create an immersive and evocative experience, remembering those soldiers on the Western Front, and a place where future generations can continue to learn and be reminded of the sacrifices that previous generations have made for our country and way of life. ” A space of sounds and silence

Two spaces co-exist within the memorial – one contemplative, quiet and interactive, and the other an immersive gallery screening archival film footage, modern re-enactments and the soundscapes of battle.

To limit the sound travelling from the Immersive Gallery into the hushed Interpretive Display Space, Arup’s acoustic team designed a structurally isolated ‘box in box’ construction. This, along with a host of other acoustic details, dramatically reduces the sound transfer between the spaces. The acoustics of the Immersive Gallery enhances the cinematic experience while background noise from building services was designed to be quiet and controlled throughout the building as well as to the surrounding parkland. 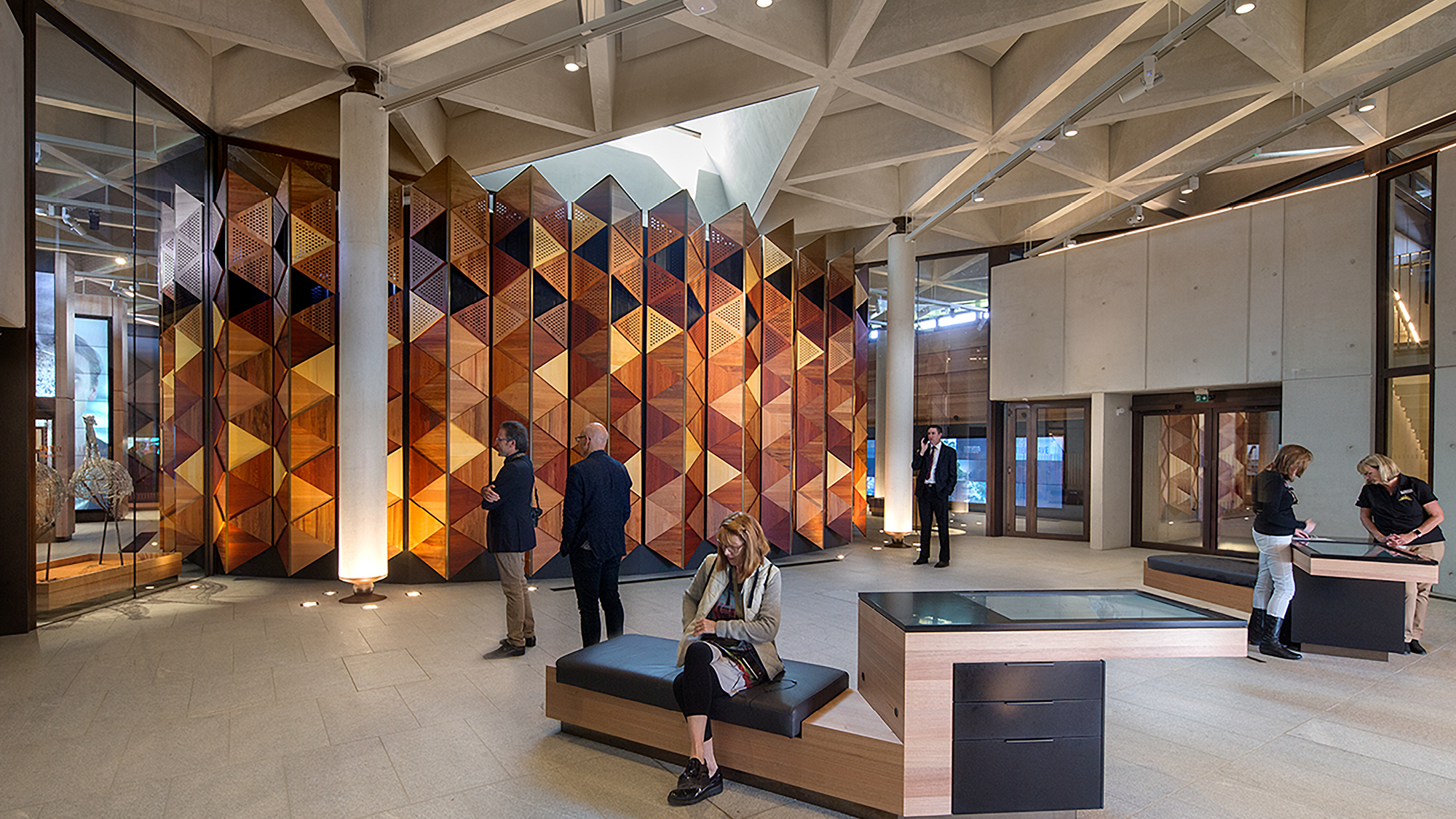 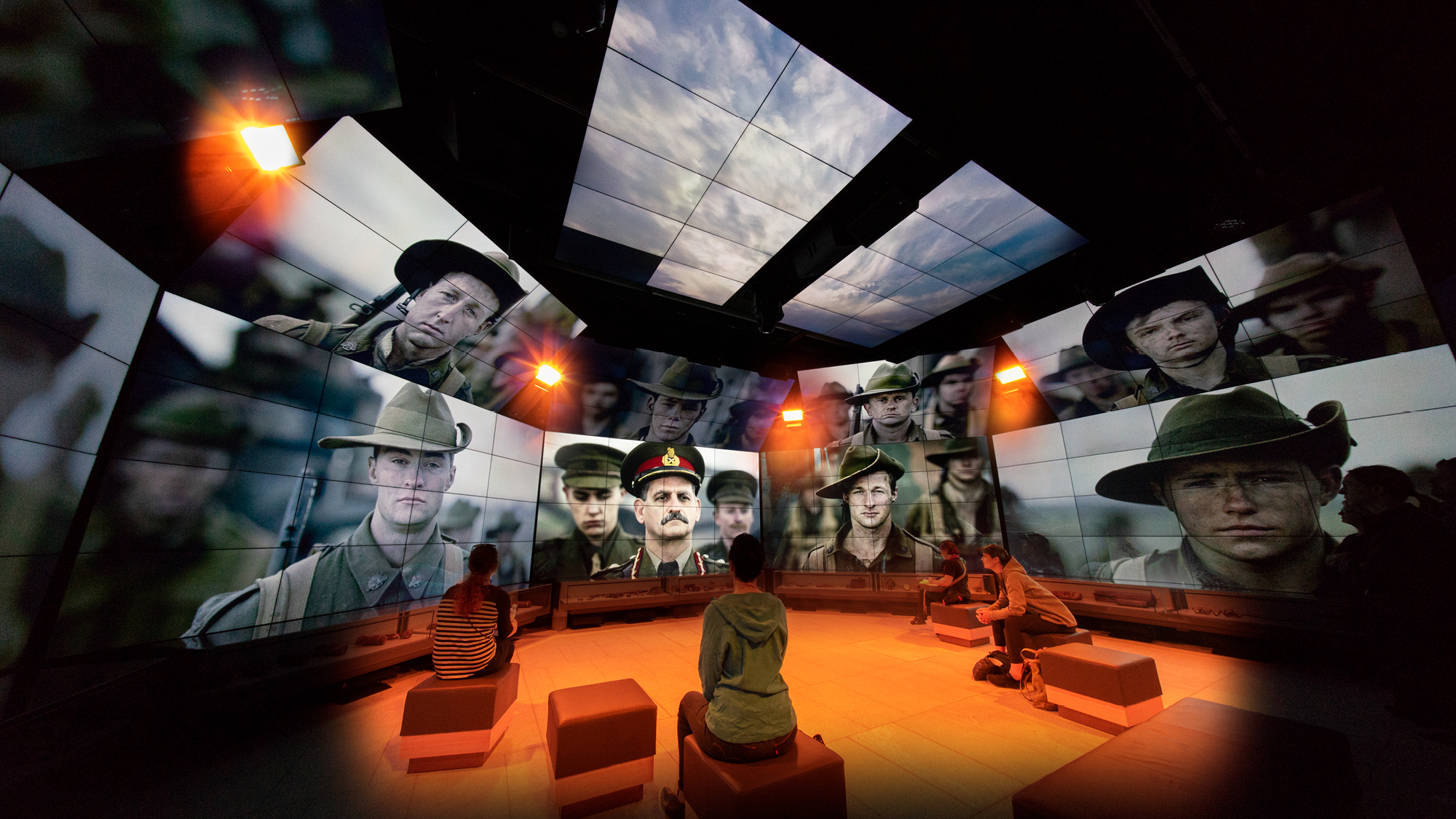 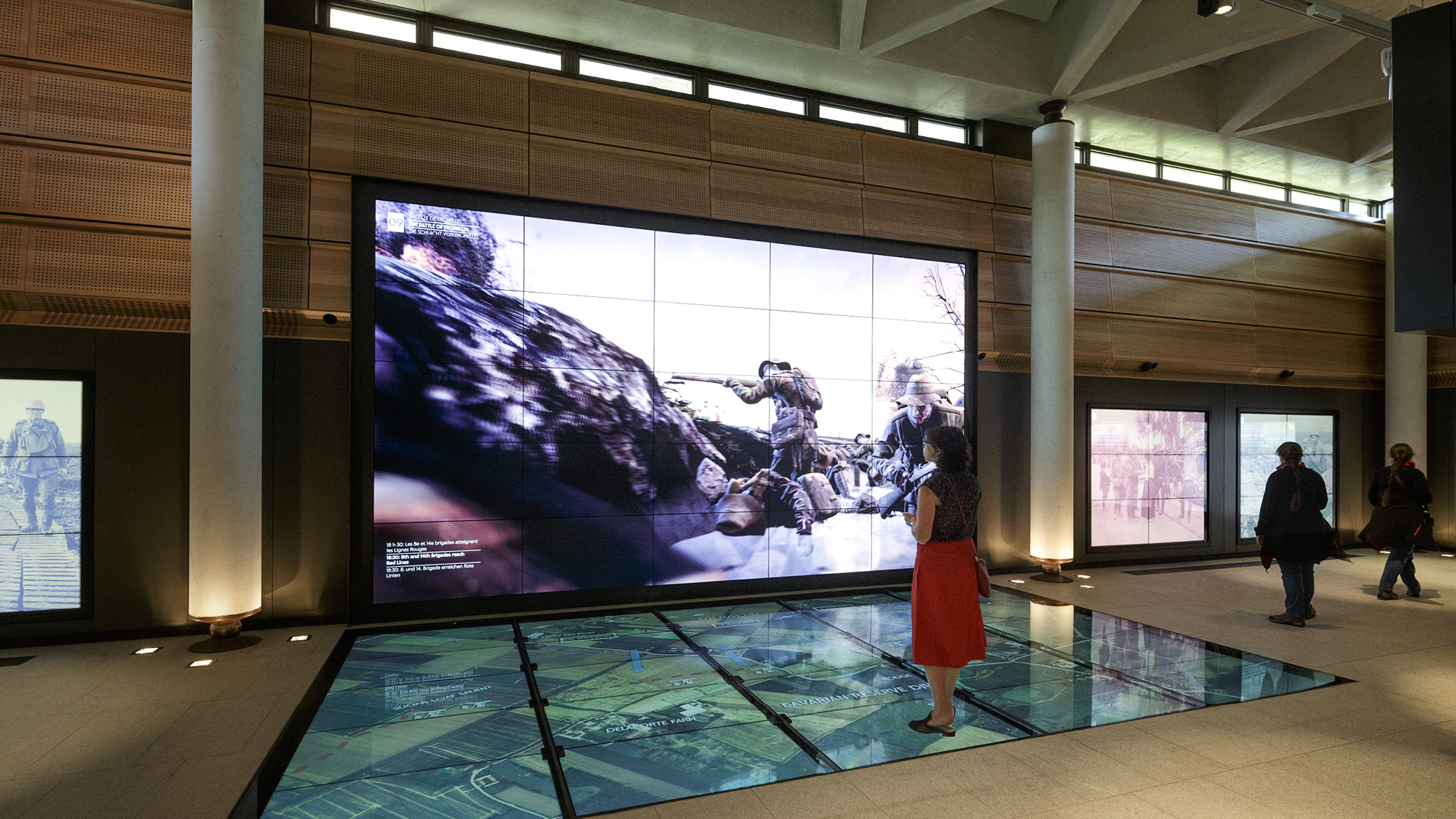 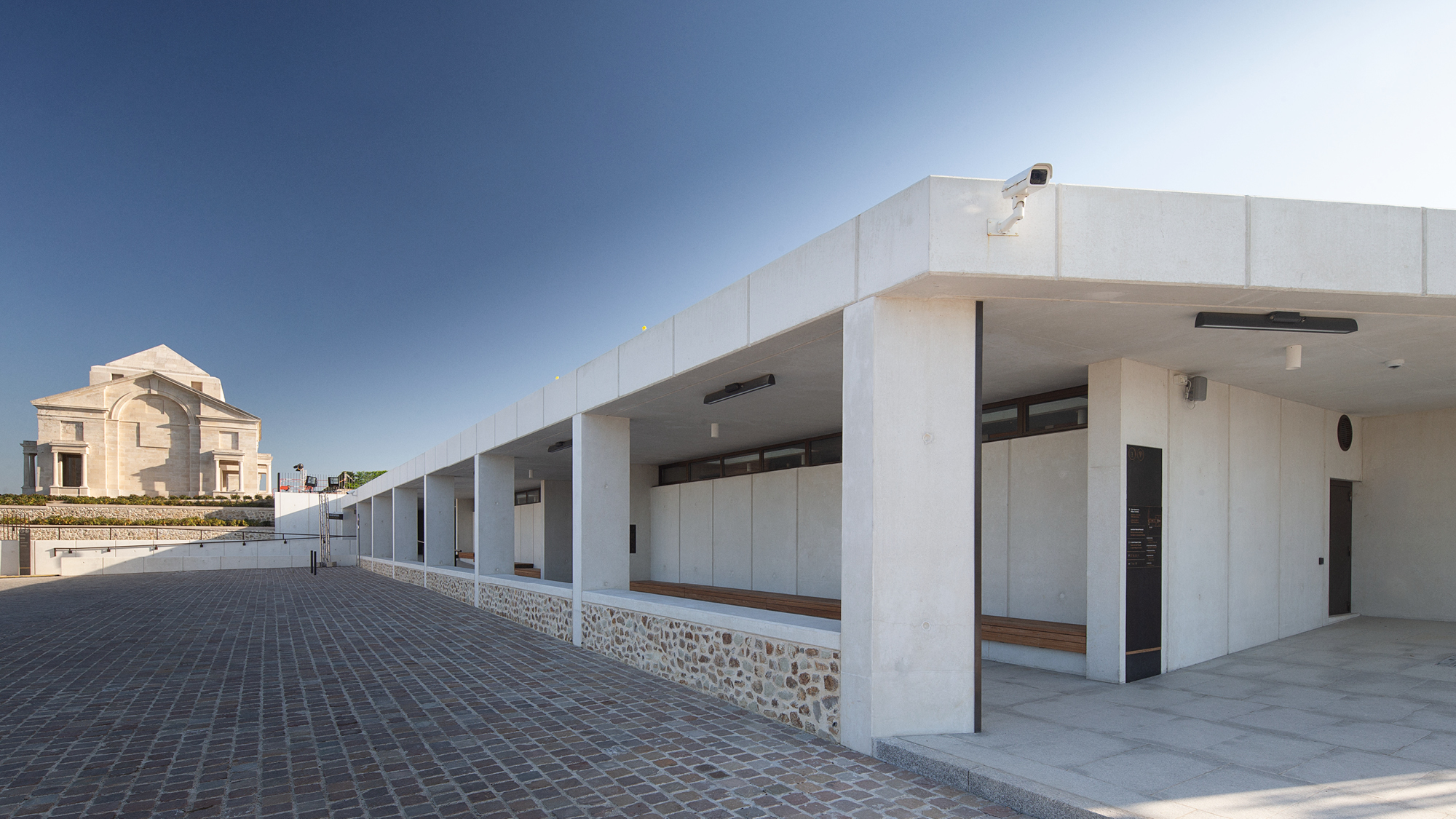 1 of 2
The Sir John Monash Centre immerses visitors in the experience of Australian servicemen and women. © John Gollings

A comfortable, yet contemplative experience

Integrated building services enhance visitor comfort in the often-cool climate of Villers-Bretonneux, remaining unseen for an uninterrupted appreciation of the artefacts, multimedia and architecture. With a focus on energy efficiency and excellent indoor air quality, Arup worked alongside the architects on electrical distribution systems, hidden cable tray reticulation, ventilation and conditioning systems.

In lieu of traditional cooling towers and condenser units, Arup’s team worked alongside the site architect in France to design a network of 41 underground geothermal piles, each 185 metres deep, that allow sustainable and energy efficient cooling without any visual disturbance to the Centre and its serene surroundings. 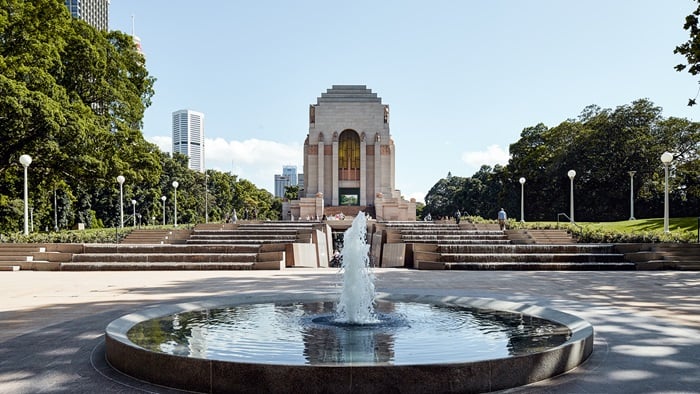 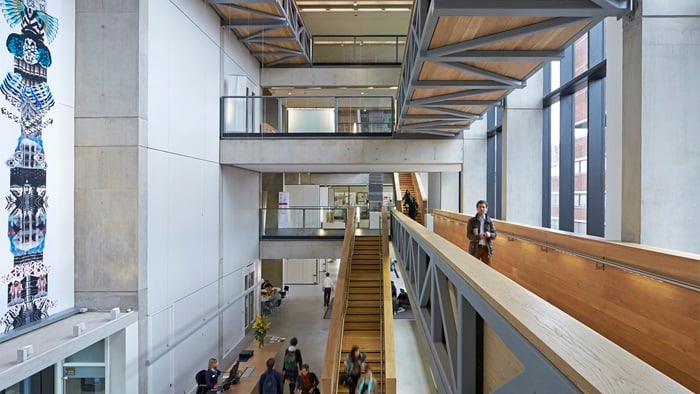