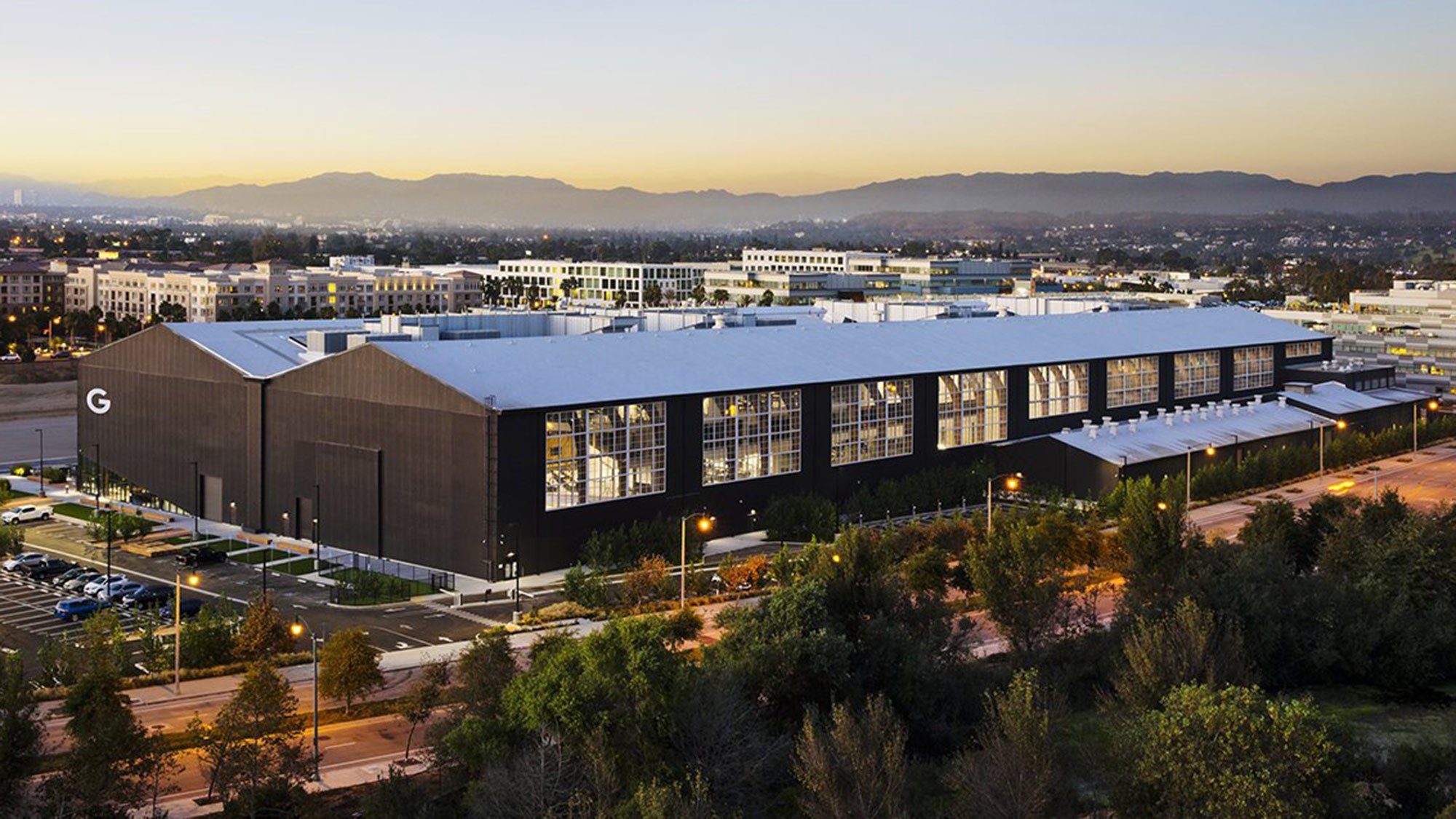 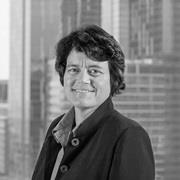 Arup is proud to have worked with Google to radically transform the historic Spruce Goose Hangar into four stories of new, modern office space.

Notable as the place where Howard Hughes built the amphibious timber airplane during World War II, this registered national historic building had many conservation-related constraints on rehabilitation. Much like the plane itself, the structure was constructed almost entirely from wood due to wartime restrictions on metal, which triggered fire and life safety questions. To solve the project's challenges, Arup came up with several creative solutions to give the Spruce Goose hangar new life as a home for yet another generation of innovative thinkers.

Our structural team performed a preliminary seismic assessment. As a result, we implemented a strengthening retrofit to the existing wood structure in order to ensure that the entire structure meets modern code requirements.

To reverse 75 years of aging, we designed repairs for the historic glulam arches including the installation of 18,000 self-drilling screws, up to 52 inches in length. We further designed new high-strength tie-rods and a flat steel roof truss to tie the historic arches together and to limit deformation in case of an earthquake.

The appearance of the central “spine” running down the middle of the existing structure had to be preserved to satisfy the historic requirements. To address fire safety concerns, we rebuilt the spine using steel and concrete construction that was later re-clad in the historic timber. Arup strategically placed the mechanical cores and most of the earthquake-resisting structural system in the spine, thus freeing up the remainder of the building for uninterrupted occupiable space.

Our fire engineers secured code modifications on the basis of submitting calculations for performance-based design of the smoke control system coupled with a timed egress analysis. This work demonstrated that occupants had the same level of life safety protection as conventional prescriptive code approaches while allowing the wood interiors to remain open to view. 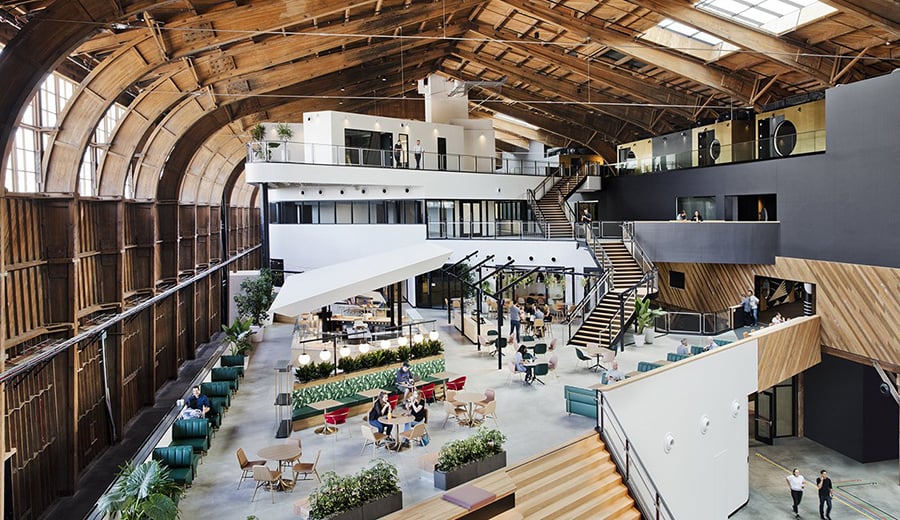 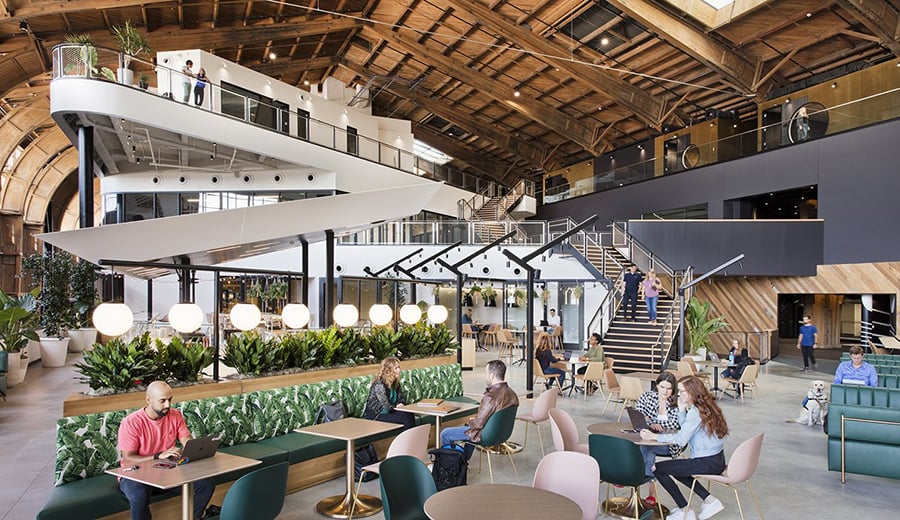 1 of 2
The appearance of the central “spine” running down the middle of the existing structure had to be preserved to satisfy the historic requirements.

With the floor plates of the new additions pulled back from the walls for fire safety concerns, the existing historic windows flood the space with daylight. In collaboration with the architects, we designed new skylights along the central spine of the building to provide daylight occupants can work by for half of annual occupied hours in 64% of the spaces. This feature refers back to the precedent set in the 1940s of working by daylight in the building.

While light helpfully bounces around the space, ricocheting sounds are less welcome. Events on the ground floor as well as conversational noise had the potential to leak up over the balconies and affect the open-plan office space. Arup’s acousticians used advanced 3D analysis to identify where noise from gathering areas on lower floors would adversely affect nearby workspace in this voluminous building. We worked closely with the architects to specify local acoustic absorption and to strategically place enclosed spaces like conference rooms as obstructions between work zones and areas of noisy activities, eliminating the potential problem.

Sometimes innovations seem crazy until they actually work. Isn’t it crazy you can use conference rooms to create silence? Or to think that 30-foot-high single-pane glass is actually an asset? Or that a screw can solve a seismic problem? Sometimes your wildest thoughts are your greatest innovations. ” 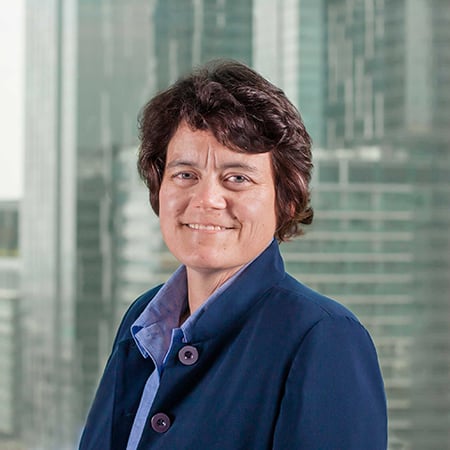 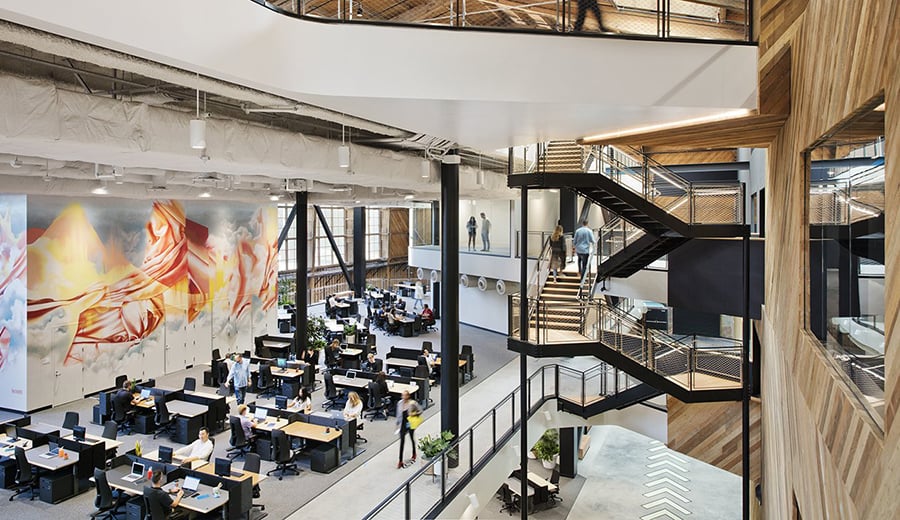 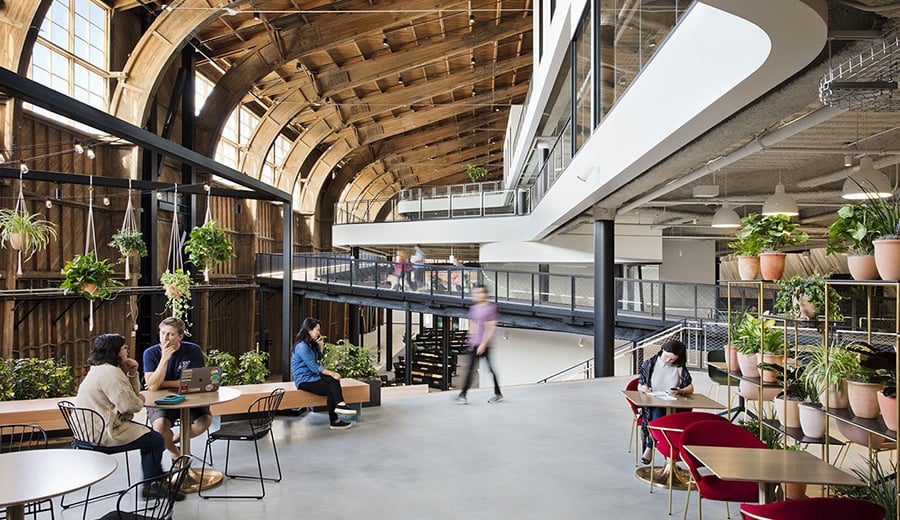 1 of 2
With the floor plates of the new additions pulled back from the walls for fire safety concerns, the existing historic windows flood the space with daylight.