The 58,000m² complex features three auditoria plugging into a compact central cube that contains backstage areas, foyers, front-of-house and support facilities. The theatres can be used independently or combined to allow performance spaces to be coupled for new theatrical possibilities.

To give freedom for architectural planning of the theatres and other large spaces, we turned the faces of the cube into a stiff braced steel box carrying the building’s lateral loads and much of the gravity force. The cube works in conjunction with columns beneath the auditoria to support and stabilise the three projecting volumes. 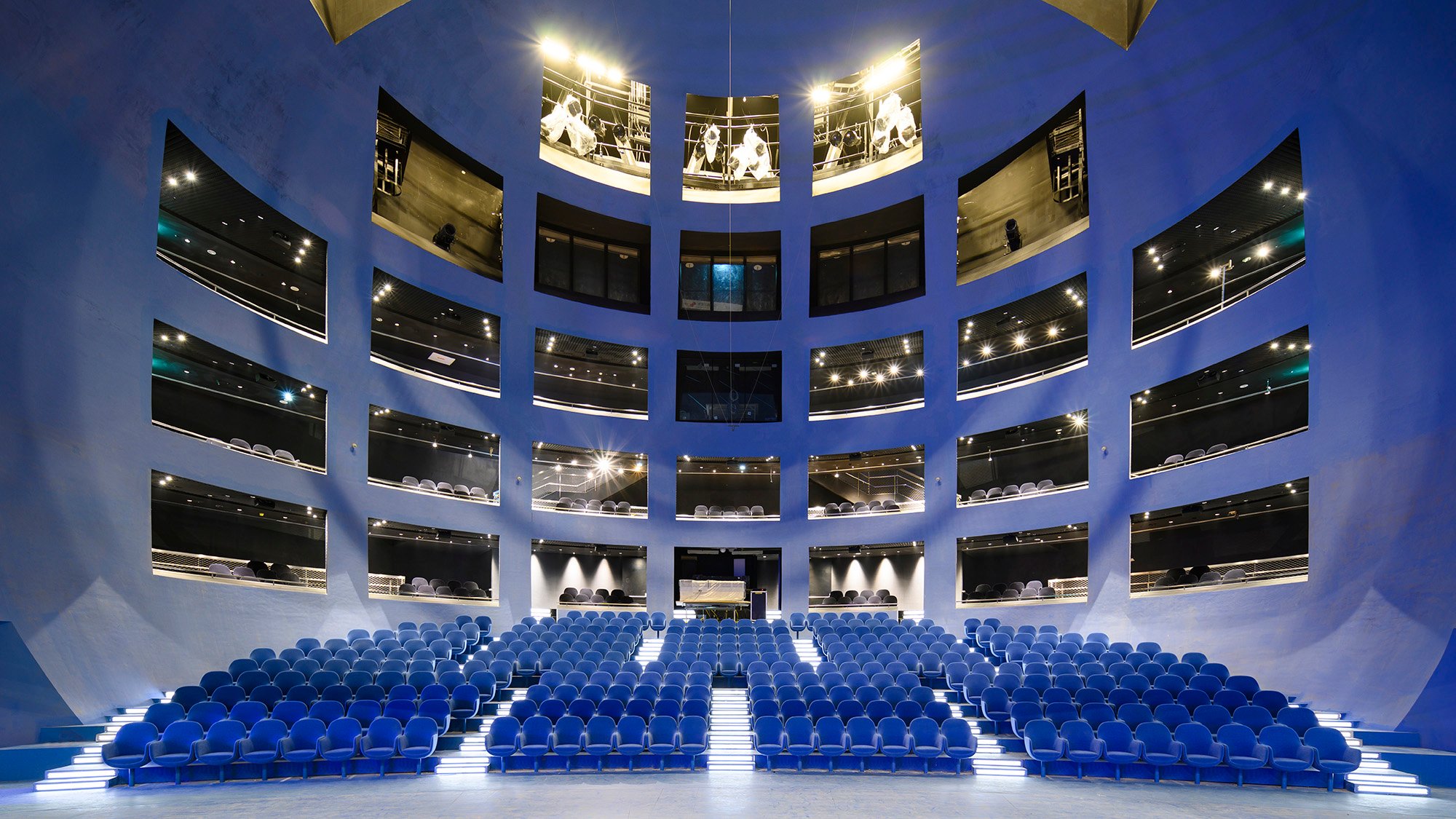 In the ellipsoidal Globe Playhouse, the 26-m cantilevering volume is framed by a three-dimensional space truss. 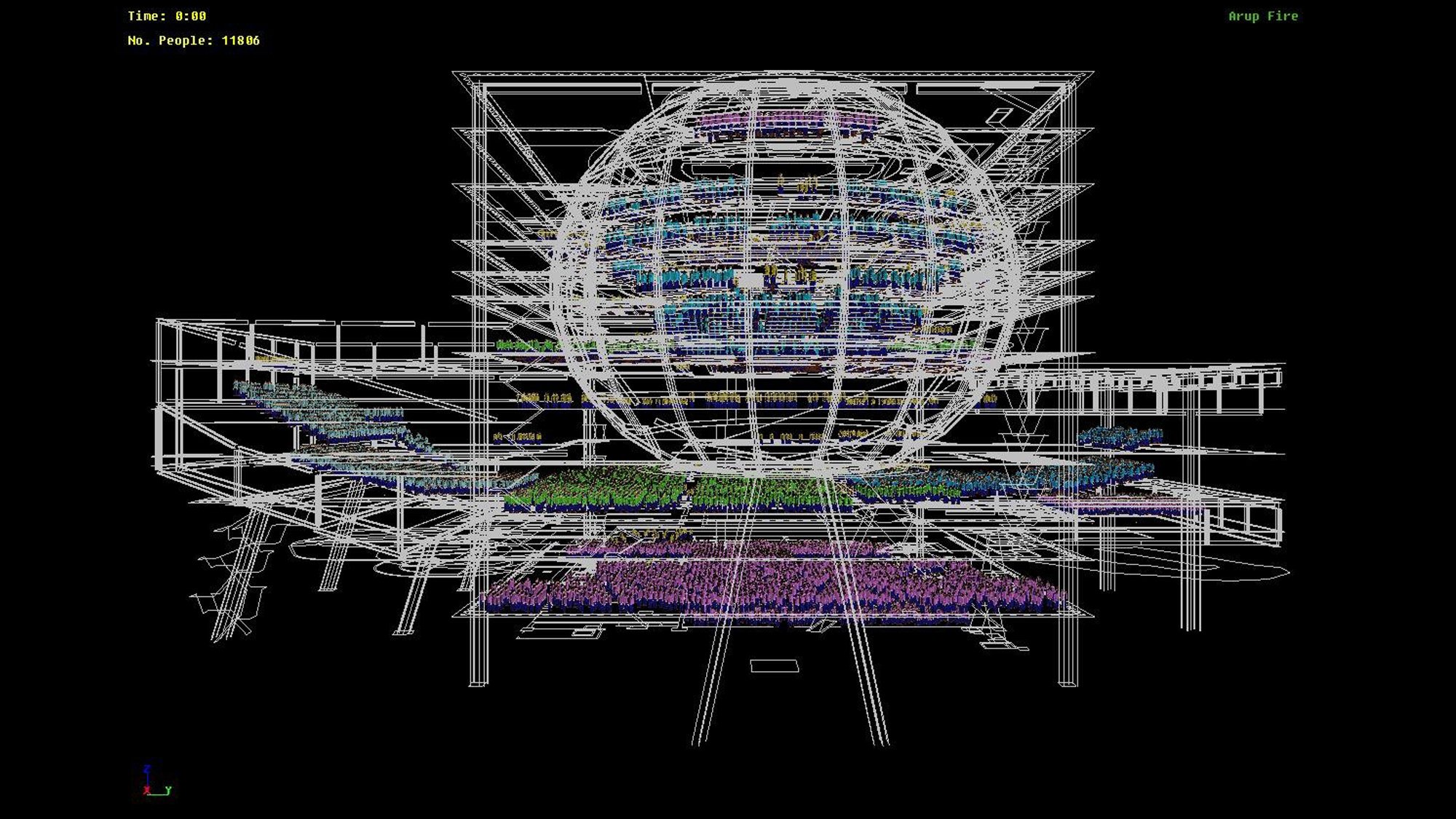 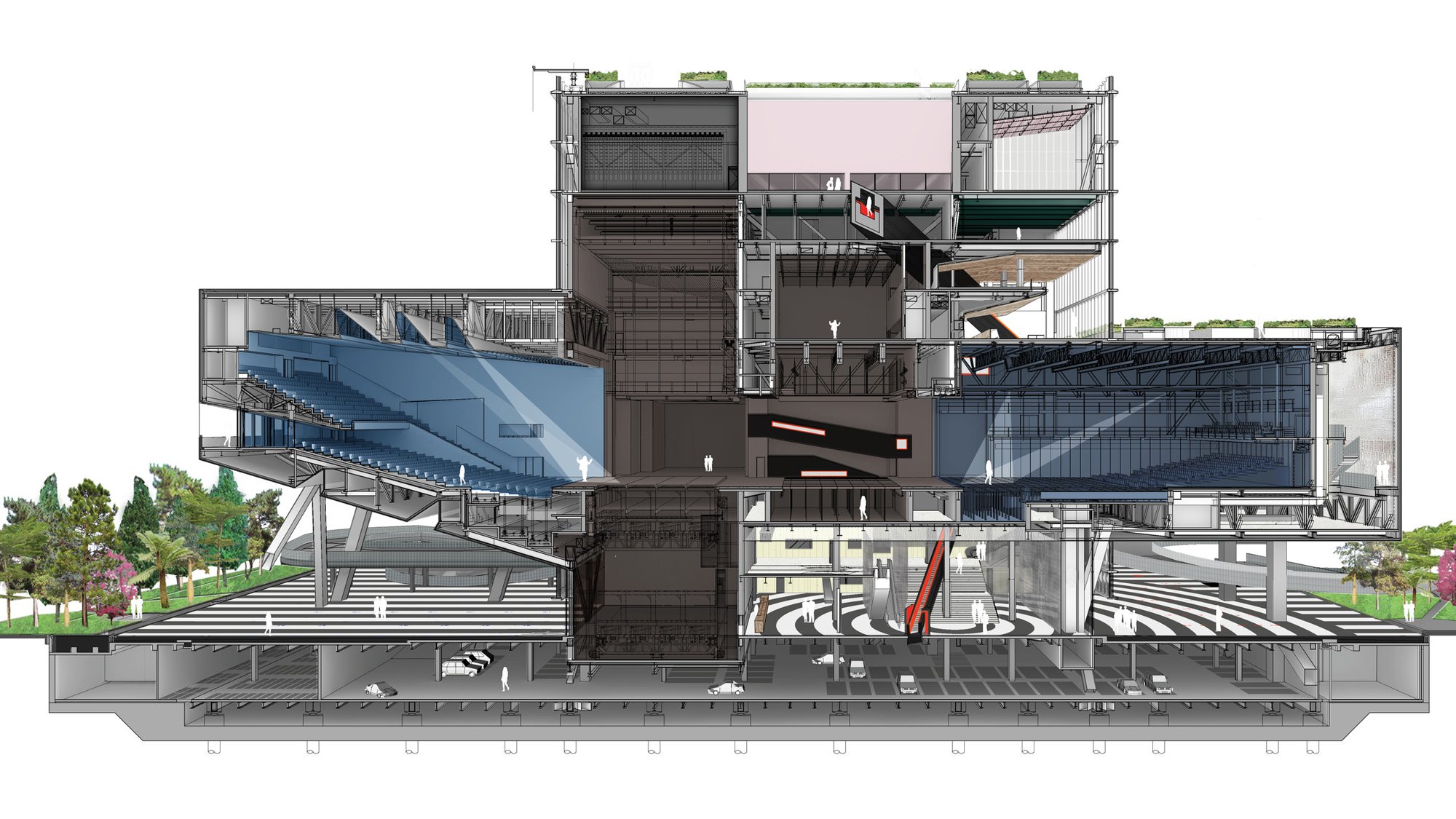 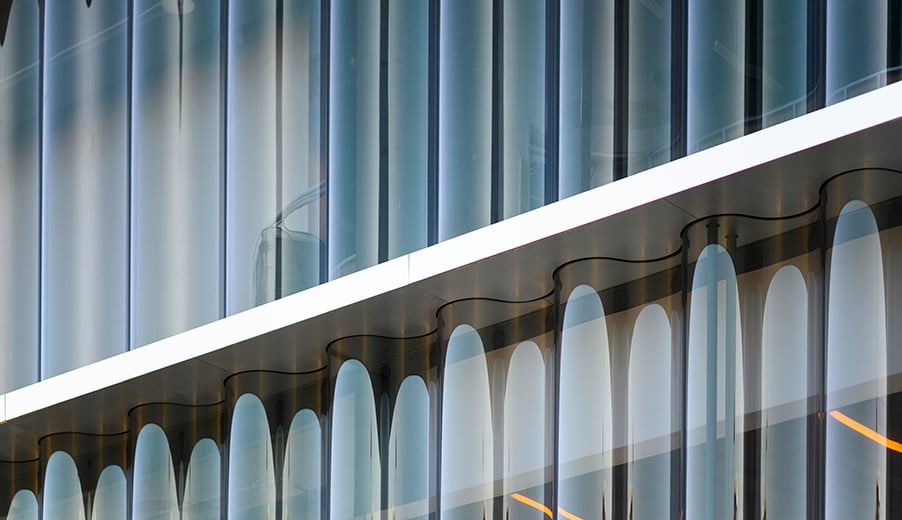 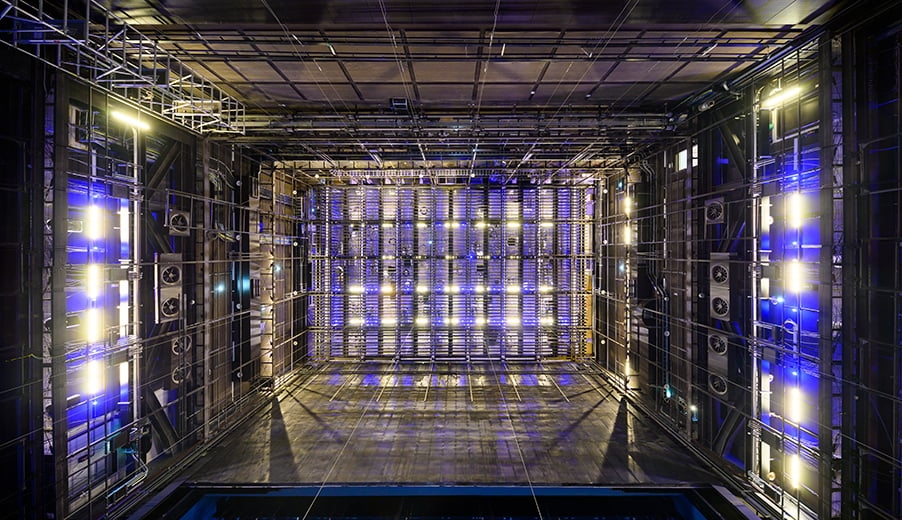 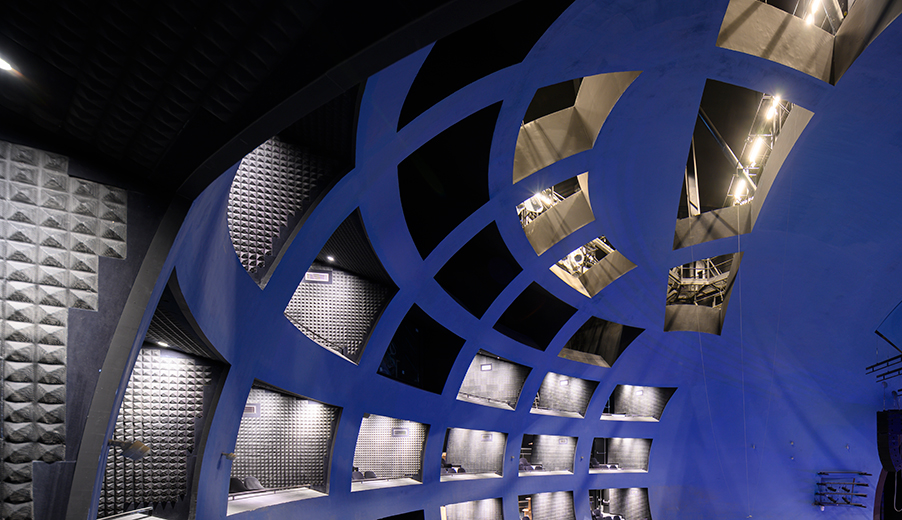 1 of 2
Through a dynamic fire simulation analysis, we demonstrated that regardless of the theatre configuration, the building could be evacuated safely in the event of a fire without conventional fire separation methods such as enclosing the central stage area with fire shutters.

View through the corrugated façade. Base isolation enabled the unique architectural form to be feasible in a highly seismic region. © Shephotoerd Co. Photography, courtesy of OMA

Due to Taipei’s high seismicity, the whole superstructure is base-isolated to attenuate the transmission of ground motions into the building, reducing the forces experienced by the structure and finishes by over 60% and enabling structural element sizes to be reduced and detailing simplified. With the first use of friction pendulum isolators in Taiwan, the structural system realised the most economic and resilient building possible for the location.

The three auditoria are supported on their projecting columns via networks of trusses. In the ellipsoidal Globe Playhouse, the 26m cantilevering volume is framed by a three-dimensional space truss occupying the space between the auditorium and outer shell, supported on the cube perimeter structure as well as the flying V-column. Balconies, circulation routes and servicing are threaded in between the truss elements.

The architectural design of the transformable theatre space posed major challenges to fire engineering and ventilation. The myriad variations in stage and seating layouts of the Super Theatre configuration, in which the two main theatres are connected to create a giant auditorium with a 60m long central stage, made it difficult to be fully compliant with the local prescriptive code in terms of fire compartmentation.

Through a dynamic fire simulation analysis, we demonstrated that regardless of the theatre configuration, the building could be evacuated safely in the event of a fire without conventional fire separation methods such as enclosing the central stage area with fire shutters. In addition, we rationalised the building escape routes to optimise the theatre seating arrangements, reduce the number and width of staircases, and extend the safe travel distance. This solution created a more open and integrated space in the building and increased the number of seats, hence providing more revenue for the client.

Through the above, we successfully convinced the authorities that our comprehensive fire strategy meets the best safety standards despite the deviations from the local code, creating a template for approving other complex buildings in Taiwan.

A sustainable and comfortable environment

The compact design of TPAC brings about advantages in sustainable operation, including energy efficiency, self-shading and passive design. To ensure our ventilation strategy would achieve optimal occupant comfort, we carried out extensive computational fluid dynamics analyses to assess the air flow through the auditorium and stage areas in their various configurations, taking into full consideration the needs of audience and performers as well as location and speed of air supplies. This demonstrated that satisfactory comfort could be achieved in the combined ‘Super Theatre’ arrangement, avoiding the need to install additional ventilation equipment. 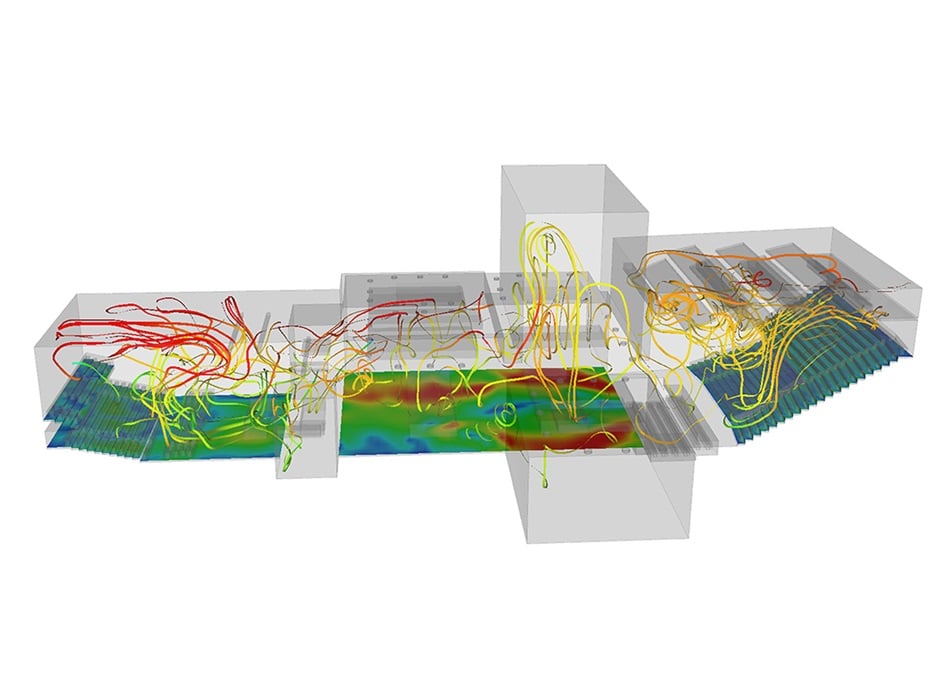 Extensive computational fluid dynamics (CFD) analyses were carried out to assess the air flow through the auditorium and stage areas. 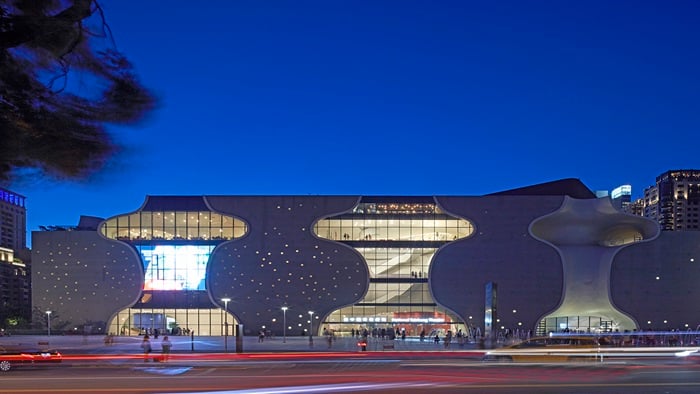 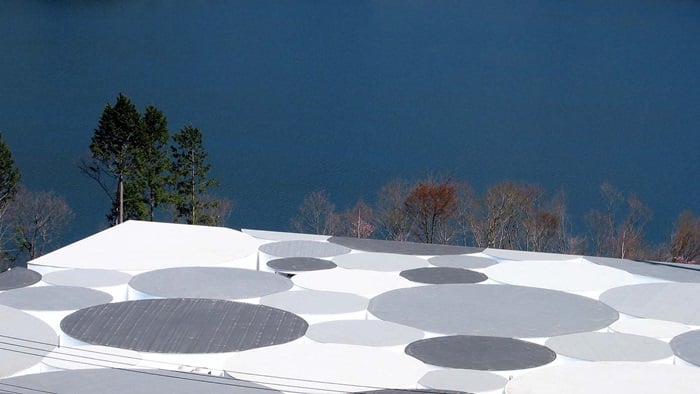 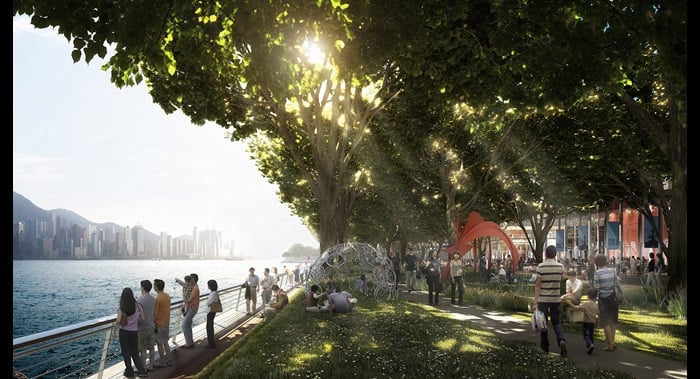