In July 2014, UK Government launched a research competition to establish the UK as a global hub for the integration of connected and autonomous vehicles (CAVs) into urban environments.

The competition sought towns or cities to host trials of CAVs in a real-world environment to understand the issues around their implementation; not just technological, but also public acceptance and the impact such vehicles might have on society. The high-profile trials would position the UK as the go-to place for the development, testing and roll-out of connected and autonomous vehicles and showcase the benefits that they can bring.

Arup’s role began by bringing together a consortium of forward-thinking local authorities, technology and automotive businesses, and academic institutions to enter the competition. The proposed project would not only develop the new technologies, protocols and connected infrastructure required to deliver future autonomous mobility, but also explore the wider legal, insurance and public acceptance issues that impact the roll out.

UK Autodrive was one of three winning consortia in the competition. The £19.2m, three-year, Arup-led project has now delivered a programme of feasibility studies and practical demonstrations in Milton Keynes and Coventry, where the city councils are taking the lead in developing the urban infrastructure technologies required to support driverless mobility.

Over its three years, UK Autodrive has delivered an ambitious programme of activity including in-city trials of autonomous ‘M1’ passenger cars – the type of vehicle we are used to seeing on the roads at the moment. Alongside this, the project has developed an entirely new concept of transport; a fleet of small autonomous pods that will provide an on-demand transport solution for the ‘last mile’ journey often required in cities. The pods will run in large pedestrianised urban spaces providing mobility for sections of the population who currently find it difficult to navigate through our town centres, such as the elderly, disabled or visually impaired.

These low-speed electric-powered ‘pods’ have been designed by RDM Group as part of the UK Autodrive programme. The pods are fully customisable and the design for the UK Autodrive version has been steered by stakeholder engagement throughout the project. There has been interest in this innovative new transport system from around the world.

As part of the project, human factors experts and community engagement specialists from Arup designed and conducted a series of workshops to assess public attitudes to self-driving vehicles. These were run to complement a large scale quantitative online survey, which was conducted at the beginning and end of the trial to assess how public opinion had changed. The workshops provided the opportunity to engage with the public in greater depth to capture existing attitudes to self-driving vehicles and the technology, to provide some background information using an exhibition space and access to industry experts, and to provide group discussions to explore the key themes of trust, ownership and community. The five workshops took place in 2018 in four English regions, with one in San Francisco to provide a comparison group.

Working collaboratively for the first time, the three vehicle manufacturers – Jaguar Land Rover, Ford and TATA Motors – have developed common standards for a number of connected car features that allow vehicles to talk to one another and to road-side infrastructure such as traffic lights or information gantries. Connected technologies enable information to be displayed directly to the driver within the car providing information from other vehicles about potential collisions at road intersections or approaching emergency vehicles. The technologies also allow the car to display information from the surrounding infrastructure, for instance, receiving information from traffic lights that enables the car to optimise its speed to hit the signals on green. This helps to prevent the car slowing or stopping which reduces emissions and congestion.

Trialling such technologies in real-life city settings has helped to establish the technology readiness of the cities and the authorities determine what needs to be done to prepare for CAVs.

A fleet of pods, developed by RDM Group for the UK Autodrive programme, was deployed in Milton Keynes city centre in October 2018 as a demonstration of a low-carbon, on-demand, ‘last mile’ public transportation system. This new low-emission system provides personal mobility to those that haven’t had it before such as people with disabilities or visual impairments.

Many elements have been considered during the pod development including the design of the vehicles, how they will be charged, how people will interact with them (inside and outside of the vehicle), and how they will be booked by members of the public. Work has been undertaken to develop a business case for the pods to ensure that the system will be commercially viable. 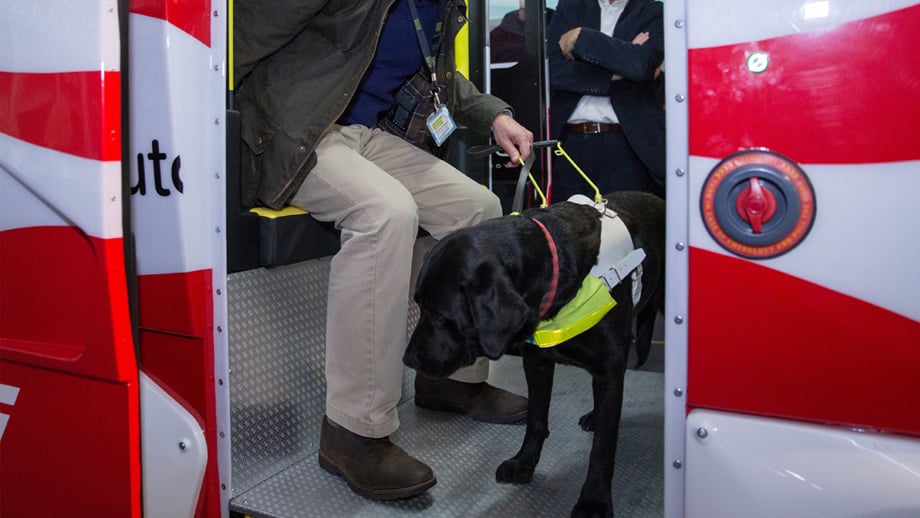 As part of this work, the project also engaged with many stakeholders, including members of Guide Dogs for the Blind, to ensure that the vehicle design included features that aid accessibility such illuminated door switches with braille and reflective strip on the door edges.
Publications

Find out more about this project in The Arup Journal, which showcases the best of our firm's work. 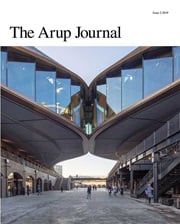 When UK Autodrive got underway in October 2015, it was the largest trial of connected and self-driving vehicles ever to have taken place in the UK. In the space of just three years, we have gone from concept to reality – delivering on our promise to trial fully connected and self-driving vehicles on UK roads. The findings and successes of this project have been detailed in a Final Report, launched in May 2019. The report is freely available to download for those interested in this ground-breaking project and how industry and government are looking to address future mobility challenges.

The project concluded in October 2018 with a final public demonstration on open roads in both Milton Keynes and Coventry, showing how far the technology development has come over the last three years.

UK Autodrive has enabled Arup and the other consortium partners to fully understand the many complexities of CAV implementation into real world environments. Each partner will build on their experiences and learnings from the project to push their respective industries forward.

Cities around the world are already adapting new infrastructures in readiness for autonomous mobility. Throughout the project the team has met regularly with Department for Transport (DfT) and Centre for Connected and Autonomous Vehicles (C-CAV) to share learnings that could help shape UK Government’s plans and policies.

UK Autodrive brought together world-class expertise to help the UK position itself as a leader in the development and adoption of autonomous driving technologies. ” The series of white papers from UK Autodrive cover many of the most interesting topics affecting the development of autonomous and connected vehicle technologies. The whitepapers, researched and written by Gowling WLG, feature insight from industry specialists and representatives from the UK Autodrive consortium, as well as desktop research, analysis and recommendations relating to each topic.