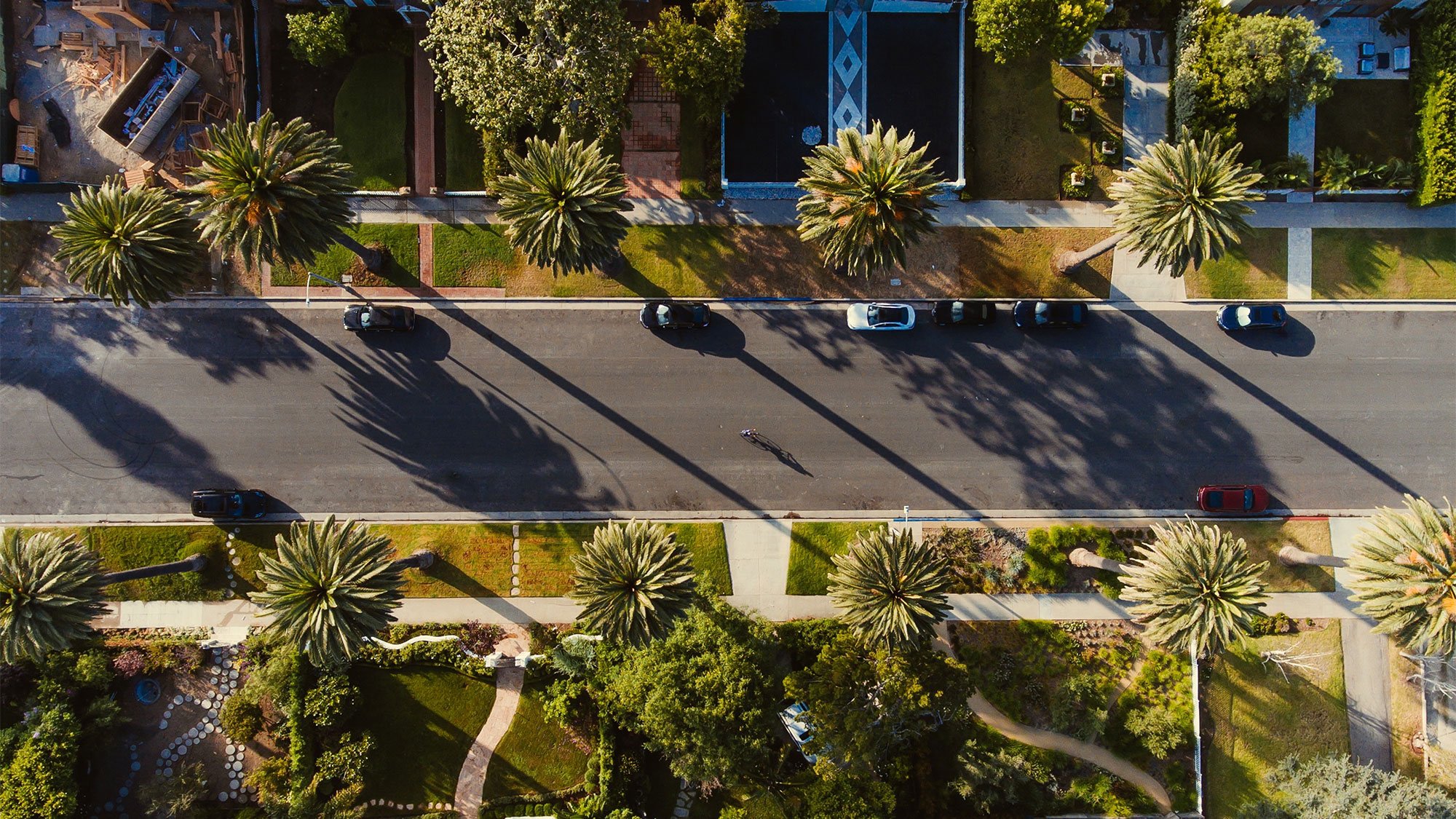 Sculptor Stephen Glassman’s latest project, Urban Air, transforms existing urban billboards into living, suspended bamboo gardens. These billboards, when transformed from their generic commercial state, into architectural planters filled with living bamboo trees, become a work of art. Each Wi-Fi-enabled Urban Air billboard will contain misters for the bamboo gardens. As the bamboo grows, it not only expands the green realm of our cities, but also absorbs air pollutants and urban heat, increasing biodiversity, and reducing night time light pollution. Urban Air can address multiple urban situations, although it’s particularly suited to urban centres with insufficient landscape and a desire for a more sustainable culture.

Urban Air started as a Kickstarter project, which is a crowd funding website for creative projects. Urban Air garnered its first international recognition when it received the 2011 London International Creativity Award. Summit Media – a Los Angeles based billboard company - then volunteered to lend their support and donate prominent billboards along major LA thoroughfares to provide the launch pad for the first Urban Air prototype.

Arup was invited to participate on the design of the first prototype as well. Arup’s role is three-fold, involving sustainability, technology, and structures.

Arup has advised on issues ranging from urban heat island effects, evapotranspiration of vegetation, and urban biodiversity. We have also developed a suite of concepts about how to irrigate the bamboo in order to keep it growing for the duration of the installation, if it’s longer than a month or two. Some of the wackier concepts have included “capturing” water out of the atmosphere, particularly relevant in marine climates like coastal Los Angeles.

The “urban heat island” effect, where urban temperatures are increased through the re-radiation of absorbed solar energy from the paved and built-up surfaces of dense cities, increases the demand on the use of air conditioning systems in buildings, which leads to increased energy consumption and less sustainable cities overall. We can combat urban heat island effects by increasing the reflectivity of surfaces or by increasing planted areas. The bamboo trees in Urban Air reduce urban heat island effects through evapotranspiration, where moisture from the leaves evaporates into drier, warmer air and provide natural cooling effects.

Urban Air provides a garden in the sky where there would normally be nothing except paper or plastic and the structural armature of a billboard. This garden of bamboo trees can attract insects, birds, and other wildlife, depending on the season and the location, that will improve the biodiversity of the neighbourhood, providing shelter and a resource for such wildlife in the midst of the city. 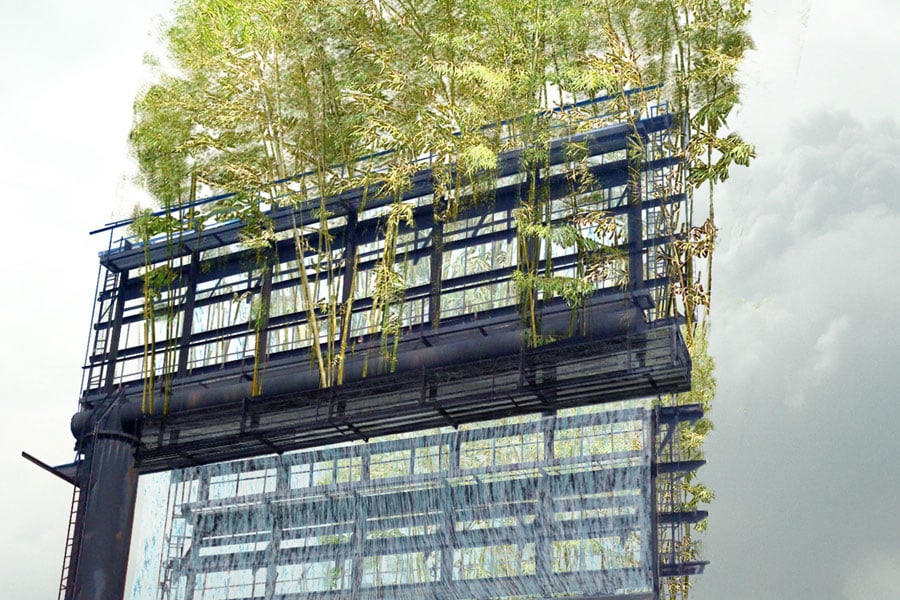 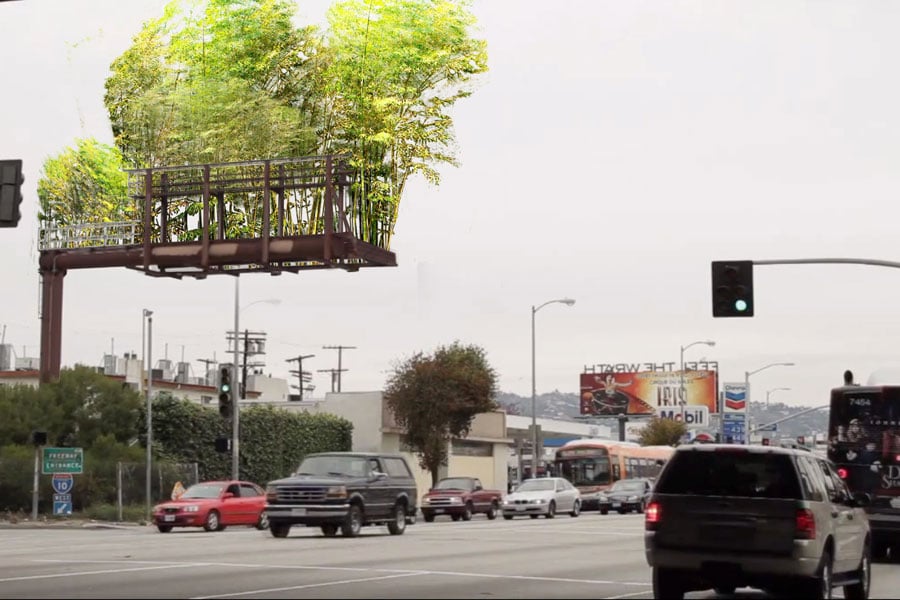 1 of 2
These art installations seek to bring greenery and urban biodiversity where there would otherwise be a generic highway billboard.

Arup developed concepts for embedding environmental sensors into the project to gauge temperature, humidity, and air quality. The billboards could become interactive nodes in the urban landscape that would allow people to digitally access this information through smart phone applications. When we say “Wi-Fi” enabled, we really mean wireless sensors that would start to form an embedded network of sensors across the urban landscape, creating a real-time “urban air” map of the city.

We have advised on billboard infrastructure and the challenges associated with installing gardens and quantities of soil for the prototype billboard structure.