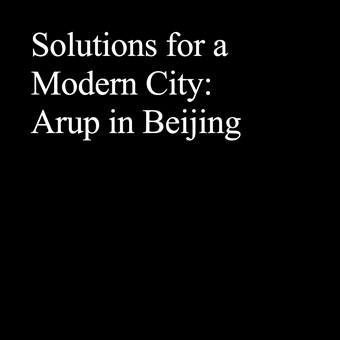 Solutions for a Modern City: Arup in Beijing

When Beijing was awarded the hosting of the 2008 Olympics, many wondered if its stated ambition to be a 'people's games, a 'high-tech' games and a 'green' games was over-ambitious.  But such critics underestimated Beijing, which has at its heart the Forbidden City, itself one of the most ambitious and iconic projects ever conceived and built.

Beijing was not content in creating some of the most stunning sporting structures seen to date, but also set about creating a comprehensive infrastructure to make the Games a success, including an international airport and media headquarters that are the most high-tech in the world at this time.

Arup is proud to have played a part in translating the vision of Beijing from a concept, to reality along with its clients, collaborators and colleagues.

Solutions for a Modern City: Arup in Beijing