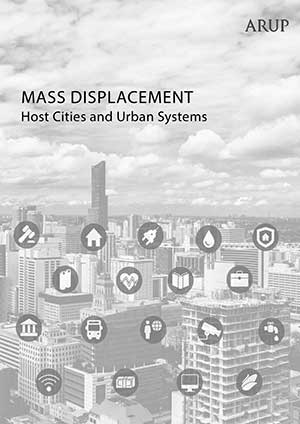 Over 60 per cent of the world’s 19.5 million refugees, and 80 per cent of the 34 million Internally Displaced Persons (IDPs), live in urban environments rather than in formal camps (UNHCR, 2017).

The war in Syria has brought displacement back into focus for cities in Western Europe hosting refugees, while further afield the majority of all Syrian refugees are residing in urban areas in Turkey, Lebanon and Jordan. Furthermore recent conflicts and/or unrest in other countries including Somalia, South Sudan, Nigeria, Myanmar and Venezuela are being felt by urban communities in neighbouring countries, currently hosting refugees.

An increase in new arrivals means that cities need to adapt to the challenges presented. This research examines, through global city case studies, the relationship between different urban systems including energy, water, housing, economic and socio-cultural systems; and explores how these systems have adapted to the challenge of meeting the needs of both new arrivals and existing residents.